While Opposition parties, including Congress, BJP and CPI(M) have severely criticised Mamata Banerjee and her visit, the TMC chief has said that the killing indicated a "larger conspiracy." 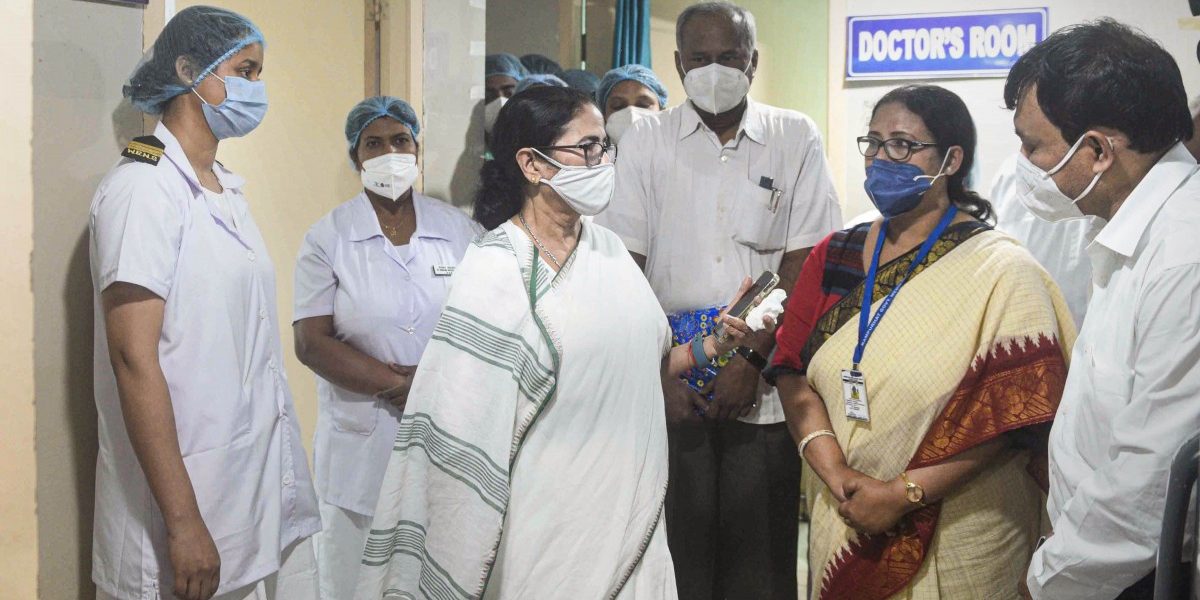 Mamata Banerjee is seen at a Rampurhat hospital in a photograph handout from the CMO. Photo: PTI

Kolkata: With Bengal on the boil since the massacre at Birbhum’s Rampurhat, chief minister Mamata Banerjee on Thursday, March 24, visited the site of the killings.

Eight people, including two children, were burnt alive in alleged retaliation after a Trinamool Congress panchayat leader was allegedly murdered in Bogtui village of Rampurhat. Locals claim that the real toll may be higher and that there are four children among those dead.

TMC panchayat deputy chief of Barshal village, Bhadu Sheikh, was murdered around 8:30 pm on Monday. A local strongman, Sheikh’s death had sparked tension in the region. Shortly after the murder, at least eight houses were allegedly set on fire.

Alleging that the killings indicated a “larger conspiracy,” Banerjee has announced that those responsible will be hunted down and arrested and the strictest punishment will be given to them. She also hit out at police, saying that had they visited the site early on, it would not have escalated.

“Anarul must surrender or he has to be arrested wherever he is,” Banerjee said.

Anarul Hossain Sheikh, a local TMC leader and block-level president of the party, was then arrested from nearby Tarapith. It is unclear as to how Hossain Sheikh is involved with the crimes and if police arrested him explicitly on the chief minister’s orders.

Around 69 people of five families have fled to neighbouring villages following the incident, police has said.

PTI has reported that preliminary forensic reports indicate the victims were first badly beaten up and then burnt alive. At least 20 people have been arrested so far in connection with the incident.

The inspector in-charge of Rampurhat police station, Tridip Pramanik, has also been suspended, along with several other policemen and civic volunteers.

The killings have stirred outrage across the state, making their presence felt in the state assembly and houses of parliament as well.

With infighting within TMC largely believed to have led to the murder of Sheikh and the massacre afterwards, opposition parties have pointed fingers at Banerjee’s trusted aide and Birbhum strongman Anubrata Mondal. Communist Party of India (Marxist) state secretary Mohammad Salim had said a day earlier that the state government has continued to suppress the truth of the excesses of leaders like Mondal.

Opposition parties have also criticised Banerjee’s visit, with CPI(M) leader Sujan Chakraborty tweeting an image of what is purportedly a festive gate having been constructed to welcome Banerjee to Rampurhat by Trinamool Congress’s Birbhum district committee.

Meanwhile, a delegation of Congress leaders led by Adhir Ranjan Chowdhury was prevented from entering Bogtui. They sat on the road and staged a demonstration demanding that they be allowed to visit the village and meet the kin of the deceased.

“We cannot allow him (Chowdhury) to visit Bogtui as Chief Minister Mamata Banerjee is scheduled to arrive at the village shortly. We cannot take any chance with the law and order situation, which is presently under control. We fear that his visit may disturb the peace,” a senior district police officer said.

"@MamataOfficial told 'Bengal is not UP & delegations are welcomed to visit #Bagtui '-Is this relaxation only meant for @BJP4India because when I led @INCIndia team to #Rampurhat I was stopped in #Bolpur even before CM flew from #Dumurjala helipad! "— @adhirrcinc @RahulGandhi pic.twitter.com/5u1cNUoMJu

In parliament, Congress member Gaurav Gogoi also slammed the state government for not allowing the party’s leader in the House to visit the site.

In Lok Sabha, BJP MP Saumitra Khan rushed to the Well from his seat in the last rows, shouting angry comments against the state’s TMC government and sat in the aisle briefly, alleging that Bengal has become a “land of terror”.

A BJP delegation including local leaders Sukanta Majumdar and Bharati Ghosh were, meanwhile, allowed to enter Bogtui and met some of the victims’ relatives.

A Trinamool Congress delegation met Union home minister Amit Shah on Thursday and sought the ouster of West Bengal Governor Jagdeep Dhankar as a political fight over the same issue.

TMC leader Sudip Bandyopadhyay spoke in Lok Sabha about his meeting with Shah.

The home minister told the delegation that there was no politics over the issue and that firm punishment should be given to the guilty, he said.

After the meeting, Bandyopadhyay told reporters that his party has demanded that the governor be removed, alleging that he was working against constitutional norms.

“Parliamentary system is under threat from him,” he said.

Dhankar has had a confrontational relationship with the state government and the latest incident has seen him putting the dispensation in the dock again. Banerjee has in turn hit back at him.