The TMC candidate, a former refugee, lived his life on the streets, sometimes even going to jail to earn a living. The award-winning writer is still living a modest life but he is the biggest star in this election.

Hooghly: In the 2021 West Bengal assembly elections, several parties have fielded film personalities as candidates. But one candidate shines brighter than all the rest.

Manoranjan Byapari, the 70-year-old Trinamool Congress (TMC) candidate from Balagarh in West Bengal’s Hooghly district, has nothing to do with the world of glamour and glitz. He has no swanky cars. He doesn’t wear designer clothes. He doesn’t own even a piece of land. He never went to school. He spent nights in jail. He pulled rickshaws, worked in a tea stall, cooked food for school children and even worked in a crematorium, all to make a living. Yet he is the biggest star in this election.

Byapari is a former refugee from East Bengal (now Bangladesh), who lives in the fringes of South Kolkata in a small suburb called Khudirabad. His home is a single-storey brick house with an asbestos ceiling. Since March 8, however, Byapari and his wife have been living in a worn out house in a town called Mogra in the Hooghly district because of the elections.

As I knocked on the door at 6:35 in the morning, Byapari peeped from the netted window and came running to open the door, wearing a khadi kurta and loose white pajama with a gamchha (a traditional thin, cotton towel) around his neck. “All my life I was a vagabond. I have nothing except her,” said Byapari as he looks back to his wife.

On the afternoon of February 28, six days before the TMC announced its candidates for the assembly election, Byapari received a call from West Bengal’s chief minister, Mamata Banerjee. “Manoranjan da, you will have to contest this election,” Didi (Banerjee) told Byapari.

“When someone as important as our chief minister, who I believe is the most important politician in the country, requests something, there is only one answer,” Byapari told me.

In normal circumstances, he never would have joined politics, he said. “The system is rotten,” he explained. But now, when a bohiragoto (outsider) force threatens Bengal’s language, culture, tradition and legacy, he had no option. “My conscience said I should stand up to these divisive forces,” said Byapari. “Every right-minded Bengali should stand against it. This election is not a regular election. With this election, they want to dokhol (take control of) Bengal. So we must resist.”

On the surface, Byapari’s life makes a fascinating story. It is the life of a real working-class hero. But when you dig deeper, you find only deprivation, ruthlessness, neglect, rejection, poverty, despair, hunger and nothingness.

In the 1970s, at the height of the Naxal movement in Bengal, Byapari spent about 26 months in jail.  His father had been a coolie and had died early due to an ulcer. For years, he slept on the platform of Jadavpur railway station. As a Dalit (commonly referred to in Bengal as namashudra and refugee), he was a nobody in the vast ‘cosmopolitan’ city of Calcutta as it was then called.

Byapari said that he went to jail several times. It was one way to earn a living. Sometimes some railway platform police (RPF) needed to fulfil their monthly quota. “Chullu sellers used to have set up with the police. Police would inform them that they will raid on such and such date on such and such time. The seller used to find people like us to give us Rs 5 to spend 5-6 days in jail,” said Byapari as he tucked in a wad of tobacco in his lower lip.

Then he was jailed for a longer time during the Naxal movement, charged with Indian Penal Code sections 148 (rioting with deadly weapons), 149 (unlawful assembly) and 307 (attempt to murder). “This jail term has changed everything. It was in jail that I learned how to read and write,” he said.

After he was released from jail, Byapari started pulling a rickshaw. One sweltering afternoon, when Byapari waited for a passenger outside Jyotish Roy College in Jadavpur, a lady professor hired his rickshaw. For days, Byapari had been searching for the precise meaning of a certain word, so he asked the professor the meaning of jijibisha. The professor turned out to be the eminent writer and social activist Mahasweta Devi. It was because of Devi that Byapari started writing. His first ever piece was published in Devi’s journal, Bartika.

“If Mahasweta Devi were alive, she would have been extremely happy to see me contest an election,” said Byapari, wiping the sweat off his brow with his gamchha. “I am fortunate that some exceptionally nice people came to my life, such as Mahasweta Devi; such as the person who taught me how to read and write in jail.”

Frequently interrupted by phone calls and local party leaders, Byapari and I chatted about God. “No offence to anyone, but God never helped me. Mortals did,” said Byapari. “People with blood and mass gave me food to eat and showered me with love. The kind of love and affection I get here every single day is unimaginable. People from the Communist Party of India (Marxist), some even from the Bharatiya Janata Party (BJP), come to meet me. Many of them tell me that they are with me no matter what.”

At first, however, Byapari’s candidature was not well received: some people tried to paint him as a bohiragata in Balagarh. “I am a refugee,” he told those people. “So I am bohiragata anywhere in this country. But I am one of you in a way nobody else can be. I lived a feral life. I understand the pain of a rag picker, a rickshaw puller, a tea seller, a person who sleeps on the street, because for years I was doing all this.” 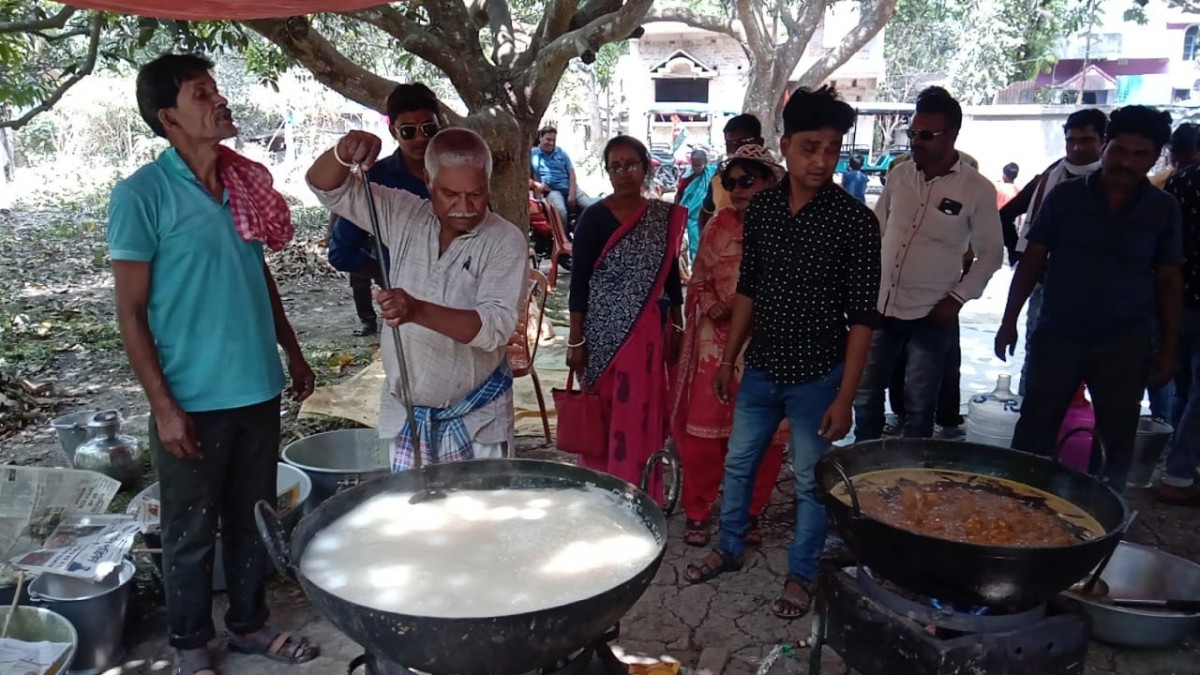 In any case, Byapari plans to build his first ever home in Balagarh and stay there for the rest of his life. Once he began campaigning and said he’d like to remain in his constituency, people offered to donate land to him to build his house. “I said I don’t need land. But I need half a brick from every house in Balagarh constituency. After the election, I will start collecting bricks and build my house,” he said.

Since he shifted to Mogra, Byapari has been campaigning relentlessly. He starts at about nine in the morning and returns home only after 11 pm. His lunch and the hour’s rest he needs in the heat of the afternoon are always at some party worker’s house.

For 21 years, Byapari had worked as a cook, making food for over 150 children every day. With this in mind, the local TMC leadership organised a public interaction event in the Somra gram panchayat (village council), where Byapari cooked and interacted with women from various self-help groups.

In his campaign speeches, he attacks the BJP, calling them an extremely powerful, violent and anti-people party on a mission to grab Bengal. “This party is all set to replace the Indian constitution with Manusmṛiti, where Dalits and Muslims will be treated as slaves,” Byapari explained to me. “Their vision is to build a society on the principle of Brahmanbad. They are a divisive force, tearing down our society on religious and caste lines.”

Also read: Ground Report: The RSS Took Root in Bengal One Haripad at a Time

He said it is “criminal” to divert attention from people’s issues such as the near daily increase in prices of petrol and diesel, the hikes in gas prices, the high prices of essential food items, safety for women and jobs for the youth and make the election about the Hindu-Muslim divide. “The BJP got a lath (kick) in Punjab, in Haryana. That’s what they deserve. The people of Bengal will give them another lath on May 2,” he said.

What of the overwhelming support for the BJP from the other backward classes, the scheduled caste and the scheduled tribes communities, I asked.

“Namashudras mostly came from Bangladesh. They have a hidden angst against Muslims,” said Byapari. “The BJP is fanning the Dalit angst against Muslims. They are telling them they will throw Muslims out of this country and give their land to Dalits and Adivasis. This is how they manipulate these people.”

Why Trinamool, I asked. Aren’t you anti-establishment? “Yes I am. And I will remain so,” Byapari said. “When the TMC came to power in 2011, I had no expectations from the party. But they have worked for the poor. This government’s welfare schemes have reached many people. Poor, underprivileged Dalits benefitted from this government. Also, we are living in extraordinary times and this is no simple election. This election is to save Bengal, save Bengal’s soul.”

He strongly believes that as chief minister, Banerjee should crack down on corrupt leaders and eliminate lumpen elements from the party. 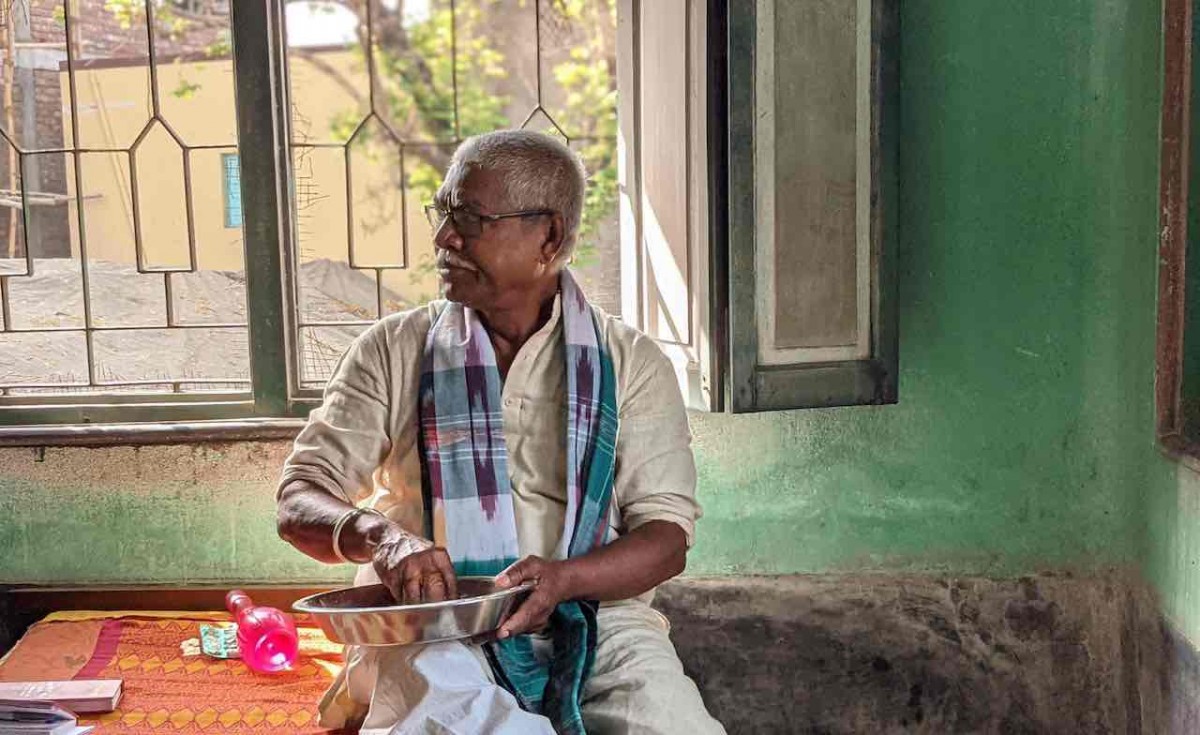 On our return to Byapari’s home, we discussed his plans for his constituency if he were to win the seat. As he took his medicines and breakfasted on panta bhat (leftover rice soaked in water overnight, traditionally served in the morning with salt, onion, chili), he said, “I have written a book on them (marginalised people). Now I want to work for them. I plan to open a nagorik (citizen’s) committee in various locations in my constituency. That committee will include people like rickshaw pullers, fish sellers, vegetable sellers and group D staff. People across all socio-economic backgrounds, from all castes and religions will be part of it. We will listen to their demands and solve their problems. I will ensure all that government schemes reach the people without hindrance.”

Byapari has written 23 books and won an award from the Paschimbanga Bangla Akademi. The translation of his autobiography, Interrogating My Chandal Life, won the Hindu literary prize in 2018 in the non-fiction category. Last September, Mamata Banerjee announced the formation of the first of its kind Dalit Sahitya Academy in Bengal, with Byapari as its chairperson. He goes from one litfest to the other and lectures in colleges and universities. But in all these years, he has remained unchanged, living a modest life in a modest rented home.

As I left his house, I saw a large gathering of TMC workers waiting for Byapari. He came out ten minutes later and hopped on a rickshaw decorated with party flags. As the rickshaw rolled down the street, the TMC workers chanted, “Rickshaw ebar Bidhan Sabha-e (This time the rickshaw will reach the Vidhan Sabha).”