The constituencies which go to polls today in Bengal reflect perfectly the outlook of a deeply divided electorate. 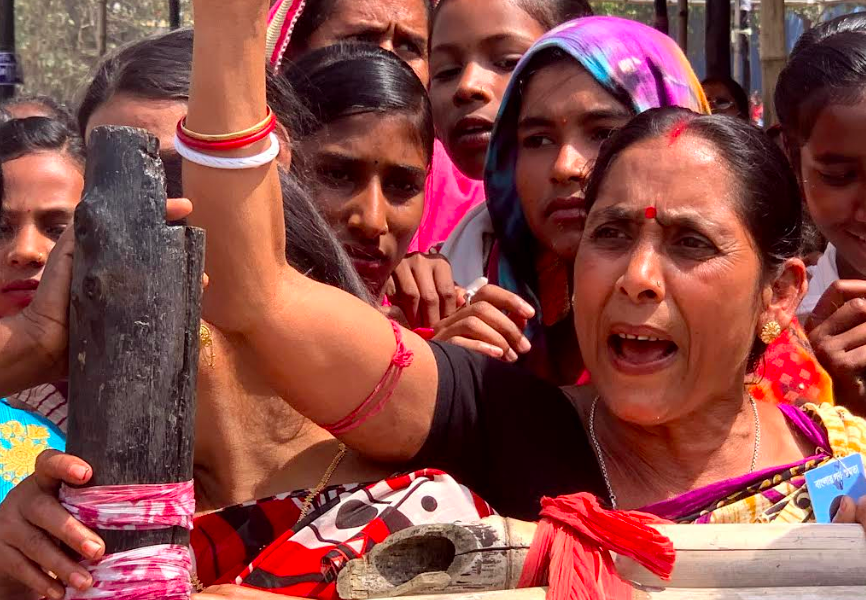 'Mamata made it a point to emphasise the welfare programmes aimed at women.' Photo: Radhika Bordia

Bankura: As Mamata Banerjee’s wheelchair was pushed up the ramp at the grounds of Saltora’s Mejia High School in Bankura district, the women assembled in the front rows of a large crowd awaiting her arrival surged forward. Several of them exclaimed in horror at what the ‘goondas’ had done to her.

The rally was one of her first after her leg had been put in a cast. It was easy to guess from their response why the BJP had to resort to cheap misogyny a few days later with its state chief Dilip Ghosh mocking Mamata over the open ‘display’ of the bandaged leg.

Mamata began her speech by addressing the women, “I apologise to my mothers, sisters and brothers for not being able to walk up to them but I thank you for walking up to me.”

As she listed her government’s achievements, Mamata made it a point to emphasise the welfare programmes aimed at women. Through her 45-minute speech, the women were the most responsive, picking up the cues to cheer her. Bengal is clearly one state where the BJP will not enjoy the advantage over the women’s vote that it has successfully managed in the Hindi belt. 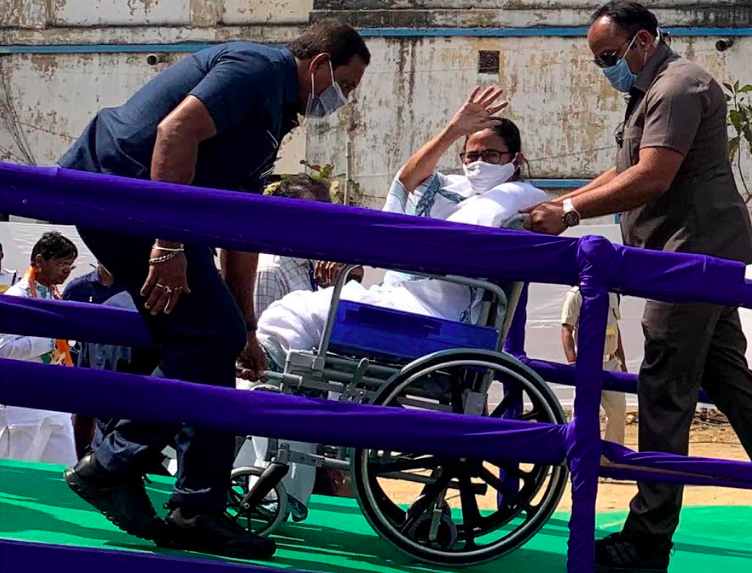 Mamata’s speech reflected this reality that is common to the whole state, but it also reached out to address the specifics of this region. Saltora is one of three Scheduled Castes-reserved constituencies out of Bankura’s 12 assembly segments.

Neighbouring Saltora, Raipur and Ranibandh are both reserved seats for Scheduled Tribes. Bankura, along with Purulia, Jhargram and Paschim Mednipur districts is part of the Bengal’s ‘Jangalmahal’ region where Dalit and Adivasi votes become  critical in deciding the outcome of 44 assembly seats which go to the polls in the first two phases of the assembly elections in the state.

“What happens in Bankura will decide what happens in Bengal,” Arnab tells me with a dramatic flourish, well-aware that the political battle in his region was being closely tracked. “If the BJP had not become powerful here, I’m sure national journalists would not be as interested as they are now,” he added.  An ice-cream vendor, Arnab had put up his cart close to the school grounds, hoping to cash in on the crowds coming for the rally.

In 2019 the BJP’s victory in the four Lok Sabha constituencies of Jangalmahal, including Bankura, along with its sweep in north Bengal, had proclaimed the Party’s arrival in the political landscape of West Bengal. A crucial part of the BJP’s victory was its ability to draw the Dalit and Adivasi vote. It did this partly by capitalising on anti-incumbency sentiments and the anger among the people against low-level corruption rampant under the Trinamool administration. But at the core of its strategy was the familiar framework of communal polarisation and the Sangh parivar’s work among these communities.

‘TMC seeks to regain lost ground in Jangalmahal, former Maoist bastion,’  ‘A Battle for Political Revival in an Erstwhile Maoist Bastion,’ ‘In Bengal all eyes on the Dalit and tribal vote’ – the headlines spell out the story from this region.

Mamata has been fighting back hard, with her electoral strategies evolved and sharpened with the help of Prashant Kishor and his I-PAC team. Kishor’s idea of ‘Didi ke bolo’ a  survey and feedback programme launched in 2019  helped gauge the anger against the TMC and allowed the party to begin to counter it. 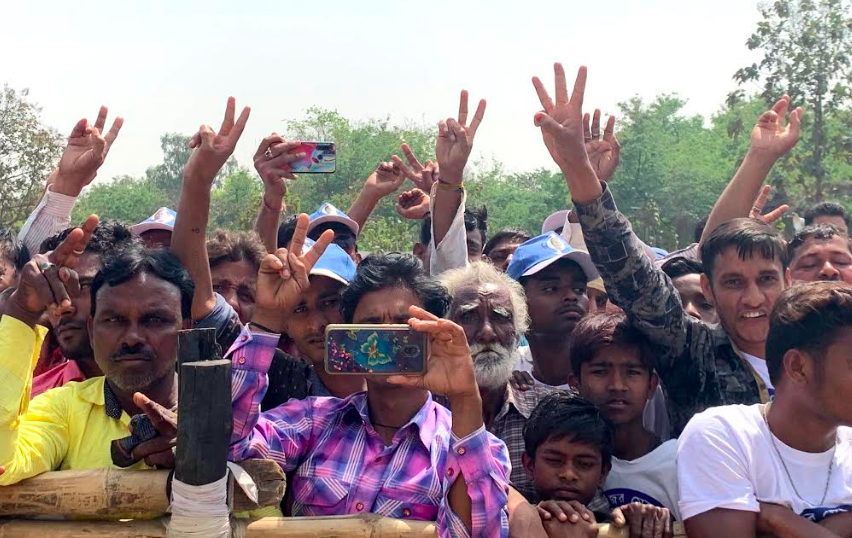 “The presence of the BJP in this region is undeniable. Irrespective of the electoral result, its influence is here to stay.” Photo: Radhika Bordia

Since then, four to five I-PAC members have been placed in each assembly constituency, camping there for months to track ground realties. Their feedback on the extent of discontent against the TMC has resulted in several ‘tainted’ MLAs being dropped in favour of newer, often younger faces. The focus on the desertions from the TMC often leaves out this fact – a number of those who left were already out of favour in the party.

In Saltora, the I-PAC members we met, young men in their late twenties or early thirties, were monitoring the campaign and guiding the TMC campaign much as the Sangh would do for the BJP. Their reports on the anger against the corruption of the TMCs two-time MLA, Swapan Baori led to him being dropped in favour of a new candidate, Santosh Kumar Mondol.

Apart from such organisational changes, Prashant Kishor also played a role in the TMC’s ‘Duare sarkar’ (‘government at your doorstep’), a massive outreach programme designed to deliver welfare schemes to people’s doorsteps. Launched on December 1, 2021, the programme ran for a period of 70 days in which 32,830 camps were set up in villages across the state and were visited by over two and a half crore people.

“In my village everyone has got their Swasthya Sathi cards made, Didi has done a good thing,” says Uma Bagdi, who supplements her family by doing small tailoring jobs. “No one has worked for women as much as Mamata. Girls have got cycles, families will get money to get their daughters married, I have three so I know the importance of this. But my village is divided. Many people are voting for the BJP, that’s clear as they keep criticising the jora–phool [the two flowers which are TMC’s election symbol] people. They say she has not given any employment, that her men do tolabaji.” 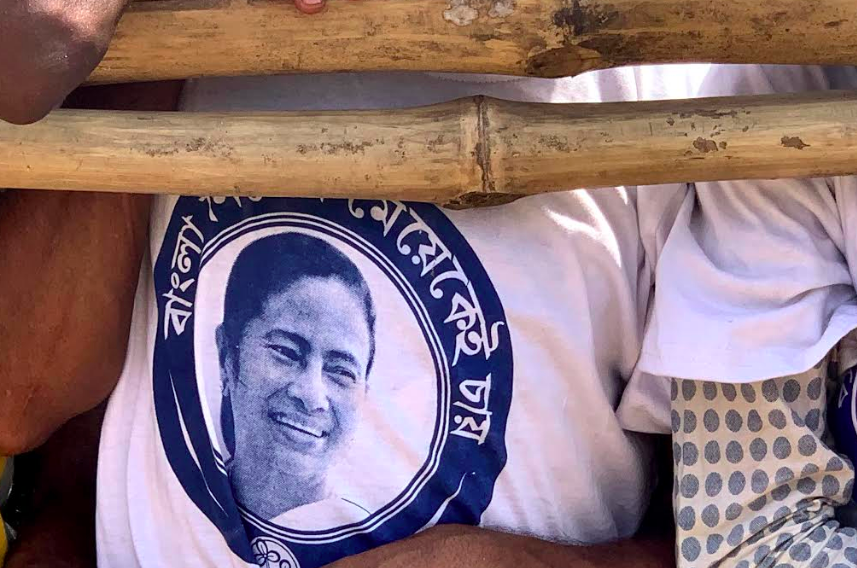 “They are being duplicitous in attacking Didi.” Photo: Radhika Bordia

‘Tolabaji’ or ‘cut money’ has become a buzzword for a petty-level extortion by lower rung TMC workers. Along with the charge of ‘appeasing Muslims’, the BJP has successfully made ‘tolabaji’ a thrust of their attack against Mamata, so much so that the term has even figured in Modi’s speeches.

The presence of the BJP in this region is undeniable. Irrespective of the electoral result, its influence is here to stay. BJP members are confident that their work among tribal, Dalit and OBC communities will pay political dividends while the Sangh Parivar sees any electoral victories as boosting the spread of their ‘vichardhara’.

The methodology is tried and tested. The BJP invokes Dalit and tribal icons,  pays homage to indigenous deities while paradoxically, Sangh Parivar groups like the Vanvasi Kalyan Parsihad work at eroding distinct cultural identities and practices of the tribals and Dalits.

I-PAC members point to the number of new Bajrang Bali temples that have sprung up, as well as the proliferation of Sangh Parivar affiliates.

Mamata understands this phenomenon only too well. The  CPI(M)’s collapse in the Jangalmahal region in 2011, is in large measure analysed in terms of the TMC’s own use of identity politics for which Mamata has been criticised, especially by the Left.

“They are being duplicitous in attacking Didi,” says Mou Sengupta, the president of the TMC’s District Mahila Cell in Bankura. “Mamata is not the one who suddenly allowed the BJP to enter Bengal one night. Their was growing throughout their rule. What did CPI (M) do to stop the BJP schools and activities? After all, they were in power forever.”

She repeats the line the party has been taking over the desertions from its ranks, “BJP has what we call ‘seven-day candidates,’ who have either arrived from outside or are unknown entities like Chandana Bauri. It’s good that she’s a woman but no one knows her or her credentials.” 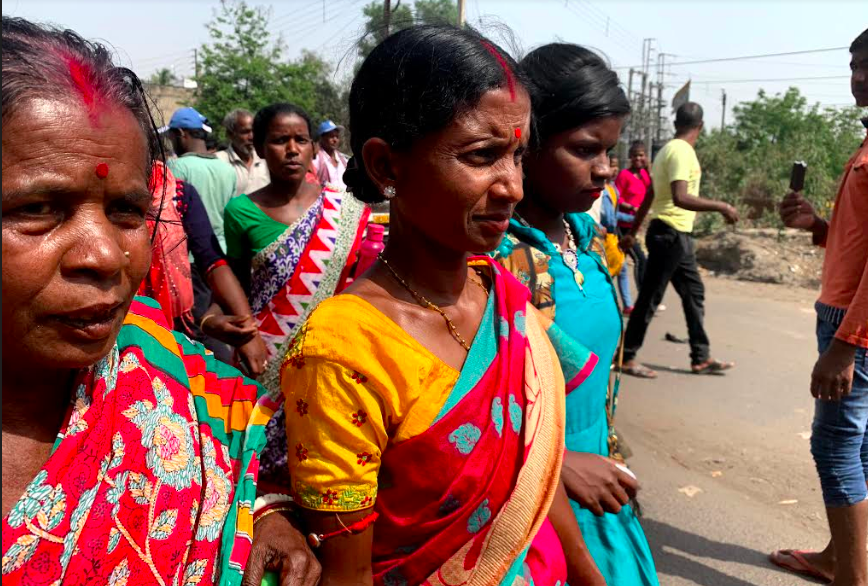 “No one has worked for women as much as Mamata.” Photo: Radhika Bordia

Sengupta, is keen to move the conversation to her main work, organizing women in vocational training groups. “These groups help them learn skills like stitching, or how to run a boutique or become a beautician. There are women from all castes but it is especially targeted for those from SC and ST communities as they often need more economic support.”

In her rallies across the Jangalmahal region, along with a mention of Taposili Bandu and Jai Jowahar, special pension schemes for Dalit and Adivasi communities, Mamata also makes it a point to mention her own government’s attempts to recognise Dalit and yribal icons as well as promote tribal languages like Ol Chiki of the Santhals. It was already made an official language by the TMC in 2011, and Mamata has now promised to create as many as 500 Ol Chiki schools. Her government has also declared January 18, the birth date of Raghunath Murmu, who created the Ol Chiki script in 1925, a state holiday.

This was not a terrain the BJP was going to yield easily. It was quick to point out that Atal Bihar Vajpayee was the one to give Ol Chiki recognition in the Eighth Schedule of the constitution and attacked the TMC government for not having worked on this issue earlier. Mamata responded by terming Amit Shah’s lunch at a Santhali home mere electoral optics.

“Mamata is fiercely taking on the BJP, there are not too many people who dare Amit Shah and Narendra Modi by saying ‘khela hobe [let the games begin]’,”says Udai Gorai, from Jemua village.

“But many people here think it will be Modi who will bring real development in this area.” Once a staunch CPI(M) supporter and part-time party worker, Gorai would not give any indication of where his vote was likely to go. 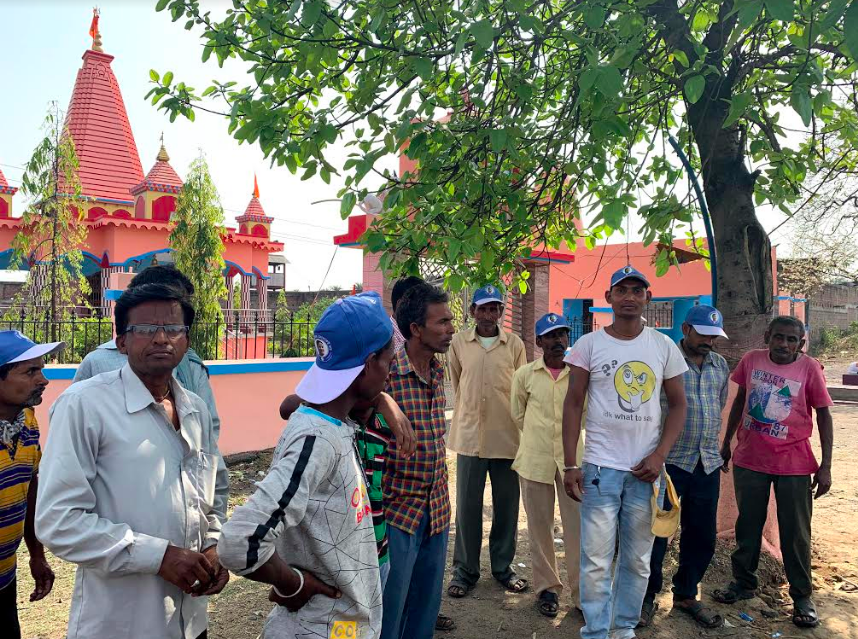 “Although wearing TMC merchandise, Dulal said his vote was going to the BJP.” Photo: Radhika Bordia

Gorai was accompanied by two other men from the same village – Nandlal Bauri and Dulal Baori. They were on their way back from Mamata’s rally at Mejhia. Although wearing TMC merchandise, Dulal said his vote was going to the BJP. “You can see the TMC hat on my head but my vote will go to Modi. Mamata has brought no employment to this region. Down this road there is a small plant but we are not the ones getting jobs there, and our village is thirsting for a proper water connection,” Dulal complains.

Wearing the same TMC cap, Nandlal was as clear that his vote was going to the TMC. “The BJP is an outsider party, I don’t trust its people. They don’t speak our language, they don’t understand us and even though some of her people are letting her down, Mamata is one person who listens to our problems. Our village is divided now but I’m in the TMC camp.”

It is clear that Mamata will not retain the number of seats she got in this region in the last assembly elections. It also seems clear she will not be wiped out by the BJP in the same measure she was during the Lok Sabha polls. Between these two extremes lies the fate of this election, and like Nandlal’s village, the state is divided.