TMC has said it's Arambagh candidate has sustained injuries in an attack and that the CRPF has been inactive in quelling voter suppression and violence. 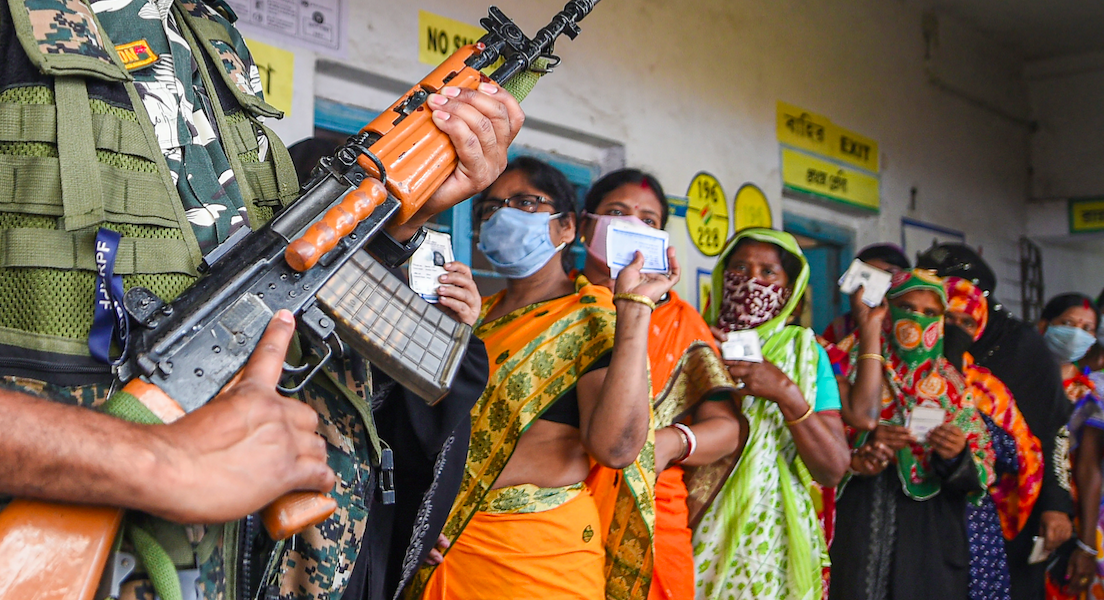 A security person keeps vigil as women wait in a queue to cast votes at a polling station, during the 3rd phase of Assembly elections at Shpaigachi, in Hooghly, Tuesday, April 6, 2021. Photo: PTI

Kolkata: The third phase of polling in West Bengal was marked with incidents of violence and allegation of voter suppression similar to the first two.

Clashes were reported from several parts in the 16 seats in South 24 Parganas district (part II), seven in Howrah (part I) and eight in Hooghly (part I) where voting is underway.

TMC candidates Sujata Mondal and Nirmal Majhi have alleged that they were heckled and assaulted by BJP workers.

Mondal, who is contesting the elections from Arambagh, said saffron party men chased her with bamboo sticks and hit her on the head while she visited polling booths in the Arandi area of the constituency. Mondal had allegedly received reports that “voters were not being allowed to exercise their franchise”.

“My bodyguards saved my life…I came to know that BJP members were stopping people from casting their votes in Arandi. I went there to find out what went wrong. I was assaulted, hit with bamboo sticks by saffron party men,” Mondal said.

TMC has tweeted a video from its official handle, showing Mondal making her way through a field.

Petrifying visuals of @BJP4India goons attacking TMC candidate #SujataMandal, openly abusing her & threatening her with rods & sickle. If they have the guts to do this to a female candidate, imagine what they can do to your daughters. This is their ‘Beti Bachao, Beti Padhao’ pic.twitter.com/uBh4oTyNeR

“Central Forces are also not neutral.They’re telling people to vote for BJP,” Mondal additionally told ANI. The alleged issue of CRPF inaction was also raised by Chief Minister Mamata Banerjee in a tweet and by TMC MP Derek O’Brien, in a letter to the Election Commission.

The blatant misuse of Central forces continues unabated. Despite us repeatedly raising this issue, @ECISVEEP continues to be a mute spectator while men in uniform are being misused at several places to openly intimidate TMC voters & influence many to vote in favour of one party. pic.twitter.com/l6t28mxwBO

Mondal had received the TMC ticket after publicly declaring that she would leave BJP. Her husband is BJP MP Saumitra Khan.

Her rival and BJP candidate Madhusudhan Bag told PTI that no one from his party had attacked Mondal. “It was the villagers who put up a resistance when the TMC leader tried intimidating them,” Bag said

A section of villagers also allegedly told PTI that “Mondal had threatened them with dire consequences if they visit polling booths to cast their vote”.

PTI also quoted unnamed police sources as having said that one of Mondal’s security guards brought out a revolver in the course of the attack on her.

Mondal was allegedly also attacked in the late afternoon, when she reached Dihibagnan in Hooghly, local news outlet Sangbad Pratidin has reported.

Banerjee has tweeted Mondal’s photograph, saying that the candidate suffered a head injury. “Only BJP can attack a woman candidate this way,” she wrote.

Chief Electoral Officer Ariz Aftab has sought a report from poll personnel in Hooghly district in connection with the alleged attack on Mondal, an official told PTI.

In addition to MP O’Brien’s letter, senior TMC leader Firhad Hakim said he has apprised the Election Commission of the Arambagh episode. Hakim also said that he was in touch with Deputy Election Commissioner Sudeep Jain on these matters.

A BJP supporter’s family member was allegedly killed in Hooghly district, hours before polling in the area, police said.

Madhabi Adak succumbed to her injuries sustained while protecting her son from a few men who barged into their house, they said.

Adak’s family accused the TMC, a charge denied by the ruling party behind the incident.

In yet another incident of violence, TMC candidate Dr Nirmal Maji said that he was “heckled” by BJP supporters and his vehicle was vandalised when he tried visiting a booth in Uluberia (Uttar) constituency.

Majhi was made to wear a helmet and escorted out of the troubled area by the police.

One of his security guards sustained serious injuries when bricks were hurled at him, a police officer said, adding that he is currently undergoing treatment at a local hospital.

The BJP candidate of Uluberia South was allegedly beaten up by TMC members on the premises of a hospital. BJP’s Papia Adhikari had reportedly gone to visit a party member who had been injured with a sword in a clash between TMC and BJP earlier, at the hospital. Once there, she and her supporters were initially heckled and then beaten.

Meanwhile local media has reported that a booth in-charge at Bishnupur in South 24 Parganas has alleged that his daughter and wife were targeted with bullets by Trinamool Congress members. Debnath Pramanik was quoted by Anandabazar Patrika as having said that he has had to run away from home on Monday, April 5, after facing violence and threats from TMC.

On Tuesday, his daughter reportedly called him to say that their house was being shot at from various directions. Since then he has failed to establish connection with his family and has reportedly learned that his wife and daughter were kidnapped. Later, Pramanik learned that the two had left home and taken shelter in a crop field to escape the bullets. TMC has denied that this happened.

From Bishnupur constituency, a video of a man seen threatening a woman, who was going to cast her vote, with dire consequences if she did has been shared widely on social media. The woman is seen standing up to the man and says he can do whatever he wishes to but that she will cast her vote.

The ECI later sought a report from local authorities, and the accused man was arrested.

Watch how Trinamool Goon is threatening women who are going to cast their vote in Bishnupur. #BattleForBengal #WestBengalPolls pic.twitter.com/ntqAPN19NW

In Khanakul, TMC candidate Najmul Karim was allegedly beaten up by the BJP activists and slogans were raised against him. Later, central forces led him out of the area.

In Falta seat, a BJP candidate’s vehicle was allegedly attacked.

At least one person was injured when crude bombs were lobbed outside a polling station in Canning Purba assembly seat. TMC candidate Shaukat Mollah accused Abbas Siddiqui-led Indian Secular Front (ISF) of the attack. The charge was denied by the party.

TMC turncoat and BJP candidate from Diamond Harbour seat, Dipak Haldar, alleged that his former party was not allowing voters to come to polling stations.

In the Dhanekhali seat, state minister Asima Patra accused the central forces of high-handedness and alleged that voters were being stopped by BJP “goons” from going to polling stations, an allegation dismissed by the saffron party.