How Mamata Banerjee Lost, Then Regained Steam in the Fight Against COVID-19

The Bengal chief minister knows that winning a political fight during a health crisis hinges on winning the perception battle as well.

Kolkata: Late in the afternoon on April 21, a well known-voice was echoing in parts of South Kolkata— Tiljala, Mathpukur, Park Circus, Rajabazar.

(I am Mamata Banerjee. I am here to seek your forgiveness for not being able to get out and meet you. The lockdown is on. I know that you can’t come out of your houses, can’t open shops. Please tolerate it for a few more days, until we ward off corona together. I am also here to tell you all that the government is with you in this. Stay indoors, stay safe.)”

The next day, the locations changed to Ballygunge phari, Park Circus Khidirpur but the message remained the same. On April 23, Banerjee’s went out to the Moulali crossing, Behala area with the same message.

The West Bengal chief minister was not in her usual silver Volkswagen hatchback, but in a white Scorpio of the state government. She was seen wearing a white cloth mask and speaking through a mic covered with a white cloth. Her message was amplified by a loudspeaker fixed atop the car.

Also read: ‘Bengal Will Not Be Throttled’: Finance Minister Amit Mitra on the State’s Differences With Centre

The team assigned for south and central Bengal spent most of the day, on April 21, locked in the Gurusaday Dutta Road BSF guest house as they waited for the Centre’s political standoff with West Bengal and its attendant bureaucratic red tape to get untangled.

A day after the national lockdown was announced by the prime minister, the Bengal chief minister was seen visiting hospitals, meeting doctors in-charge, thanking the medical fraternity, paying surprise visits to local markets, personally instructing shop owners on how to maintain physical distancing, drawing circles on the road with a piece of brick to tell people to maintain social distance.

All this while, Banerjee was holding review meetings with senior bureaucrats of various departments, coordinating with the Centre, convening an all-party meeting and a host of other things. Over the following days, the people of Bengal showered a lot of praise on Mamata and her government.

The chief minister has not restricted herself to an air-conditioned office but was seen leading from the front in her state’s response and overseeing preparedness to contain the spread of the novel coronavirus. West Bengal CM Mamata Banerjee interacts with sweepers during her visit to various areas of the city to review the situation of coronavirus prevention, during the ongoing nationwide lockdown, in Kolkata, Tuesday, April 21, 2020. Photo: PTI

Mamata’s hands-on approach created a positive impact in Bengal, so much so that the state which is known for its violent political atmosphere shrugged of its differences and joined hands to combat the pandemic.

“This is not the time for a political catfight. All of us are fighting against a common enemy against humanity. We should fight this battle together,” BJP state president and MP from Medinipur, Dilip Ghosh said.

“She (the chief minister) is trying hard. Our best wishes are with her. We also stand by the government at this time of crisis. Politics can take a backseat now, said Surya Kanta Mishra, CPI(M) state secretary and former state health minister.

At the same time, of course, questions remained about how seriously the government was taking the challenge, On April 11, The Wire reported that the state of West Bengal had actually performed the least number of tests for COVID-19 amongst all the large states in India.

Data compiled by The Wire from various state health departments showed that West Bengal had conducted 1,889 tests as of April 9 while the highest number of COVID-19 tests were conducted in Maharashtra (30,766), followed by Rajasthan (18,000) and Kerala (12,710).

As the case load slowly began to spiral, the state government came under fire as the opposition accused Mamata of suppressing official data regarding COVID-19 infected patients and deaths in the state.

Mishra, who had praised the chief minister two weeks earlier, now alleged that “Mamata Banerjee is discouraging reporting of cases and inviting serious trouble for the state. The CM is misleading the people and lying.”

BJP leaders and the governor of the state also allegedly said that Trinamool leaders were stealing rations and using the grain for their own benefit. “The state government is failing to provide ration to people. Their local leaders are stealing [it].”

Concerns were also raised over the low testing rates. The opposition pointed out that by not testing enough people and by suppressing the data of those infected by COVID-19, the West Bengal government was trying to prove its administration was efficient and successful in combating the virus. In the last two weeks, Banerjee has squandered the early advantage she had while fighting the crisis.

A new dynamic was also introduced by fake news being circulated across social media, a lot of which has been debunked by the police. It has been noted that some senior BJP leaders have also shared many of these misleading or false news items.

Also read: Bengal’s Sluggish Response to COVID-19 Is Unbecoming of Its Potential

Earlier this month, Banerjee accused BJP leaders of spreading fake news about alleged administrative lapses in enforcing the lockdown. “In the meeting, we told the prime minister that we are cooperating with the Centre, but there are some people and leaders who are spreading fake news about the state and engaging in dirty games… We do not stand to lose or gain anything by increasing or decreasing the death figures,” Banerjee told reporters in Kolkata on April 12.

Going back to gains

The situation has started to change for the Mamata Banerjee government in the last three days. She is once again back on the streets of Kolkata. Daily media briefings by state chief secretary Rajeeva Sinha have brought a lot of clarity on data surrounding COVID-19. The state government started sharing a daily report with the media, outlining not just the usual figures but also publishing data about the number of tests undertaken by testing labs and the stocks of PPE kits, N95 masks, sanitisers, etc they had.

“The apparently defective test kits supplied by ICMR-NICED, Kolkata, are resulting in a high number of repeat/confirmatory tests and causing delay and other attendant problems at a time when we are battling a pandemic,” the state health department tweeted. 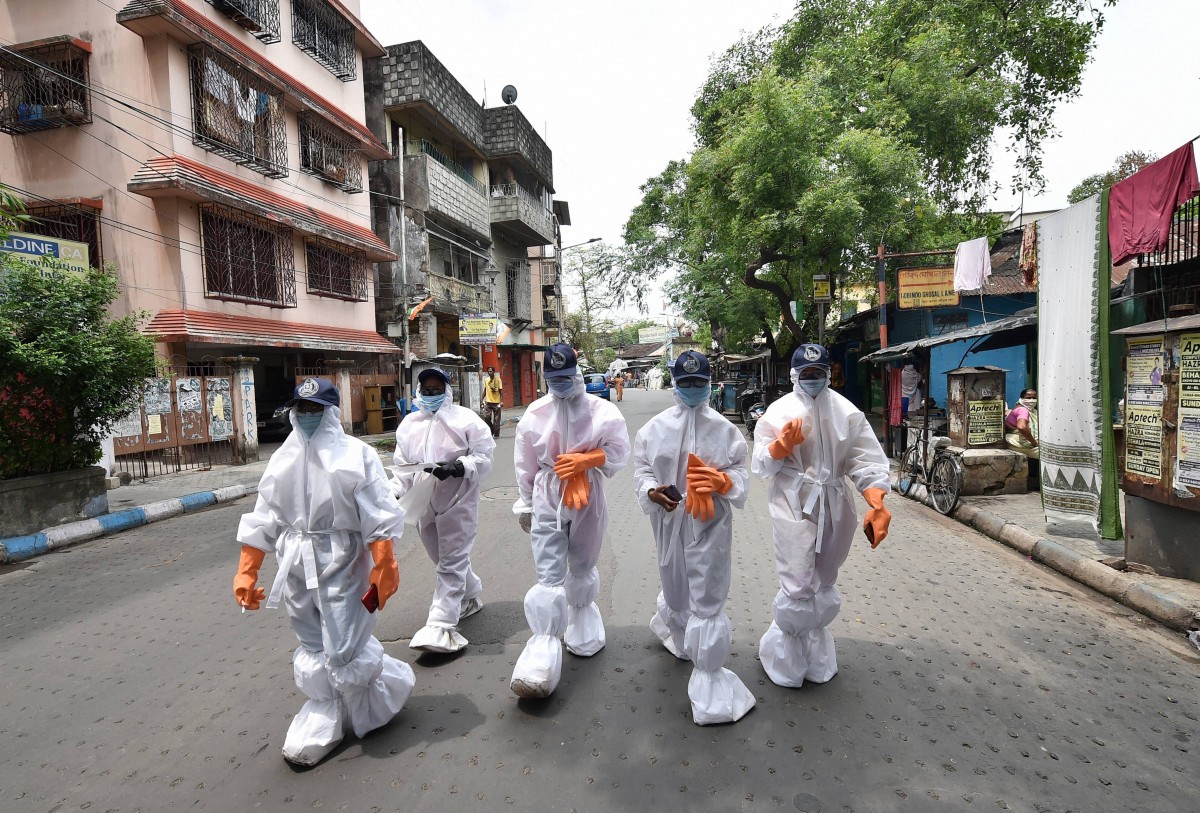 Later, the NICED confirmed the West Bengal government’s claim on faulty kits and said that many kits were showing “inconclusive results.”

“This has been noted by ICMR as well…. It is unfortunate that the kits are not standardised by the manufacturer to give exact results… It is difficult for each of the medical college to standardise the kits… hence they are showing different and inconclusive results. The matter is being seriously addressed by the ICMR,” NICED director Shanta Dutta told The Hindu.

Regional news channels from the state reported on Thursday that poll strategist Prashant Kishore, who is helping Mamata prepare for the 2021 state election, is now advising the government in its handling of the COVID-19 crisis. Besides his skills as a political consultant, Kishore has experience in public health as he had worked for the UN for eight years before entering Indian politics.

West Bengal is not only witnessing the outbreak of COVID-19 but is simultaneously experiencing a confrontation with the Centre. And the ruling Trinamool Congress is well aware that to win a political fight during a health crisis, it needs to win the perception battle as well.

Hence, Mamata is continuing to play to her strength — which is to be around people on the ground. Even as this piece is being written, her voice is echoing in the lanes and by-lanes of Dum Dum. No, the chief minister is not actually visiting the area—a recording of her speeches is being played by the local municipality van over loudspeakers.