The BJP used the photo of IndiaToday.in journalist Abhro Banerjee, claiming him to be party worker 'Manik Moitro' who was killed in Sitalkuchi. The party later said the error occurred due to a 'hyperlink'. 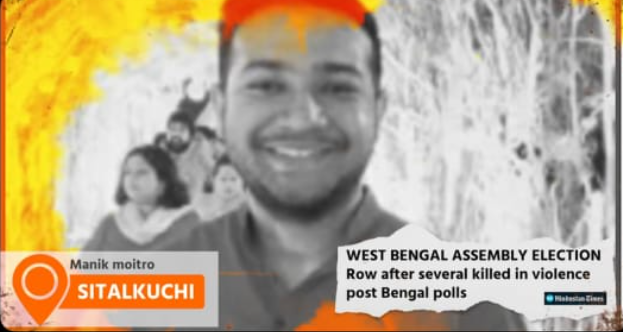 New Delhi: Amid reports of several killings in various parts of West Bengal, a journalist has pointed out that he was “falsely” identified as a BJP worker who died in post-poll violence in the state.

According to reports, the West Bengal BJP on Wednesday shared a video of post-poll violence and used the photo of IndiaToday.in journalist Abhro Banerjee, claiming him to be “Manik Moitro” who was killed in Sitalkuchi.

Banerjee has posted a downloaded version of the video on Facebook saying, “I am Abhro Banerjee, living and hale and hearty and around 1,300 km away from Sitalkuchi. BJP IT Cell is now claiming I am Manik Moitra and died in Sitalkuchi. Please don’t believe these fake posts and please don’t worry. I repeat: I am (still) alive.” His photo can be seen at 2:36 minutes. 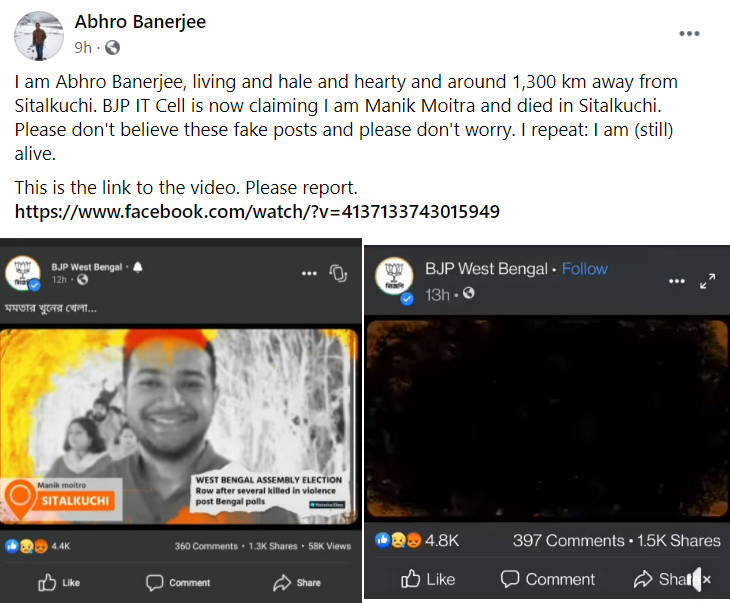 Banerjee has also posted the same message on Twitter.

I am Abhro Banerjee, living and hale and hearty and around 1,300 km away from Sitalkuchi. BJP IT Cell is now claiming I am Manik Moitra and died in Sitalkuchi. Please don't believe these fake posts and please don't worry. I repeat: I am (still) alivehttps://t.co/y4jKsfx8tI pic.twitter.com/P2cXJFP5KO

Banerjee told India Today, “I woke up a little late this morning and saw over 100 missed calls. Even before I could check what happened, my friend, Arvind, told me that the BJP IT cell has used my picture in place of Manik Moitro who had allegedly died in Sitalkuchi.”

Of the nine names of victims of post-poll violence shared in the beginning of the video, two belonged to Sitalkuchi – Manik Moitro and Mintu Barman, India Today reported. However, no one was identified as ‘Manik Moitro’, the report said.

The BJP has taken down the video and issued a statement claiming the error occurred due to a “hyperlink”, the news website reported, citing a statement issued by the BJP. “The image of Mr Abhro Banerjee was erroneously included in the video while using an article by him as a source for the content,” the statement said.

“To set the record straight, Shri Manik Moitro succumbed to his injuries in Sitalkuchi following violence instigated and inflicted by TMC members, his image has been included with this statement. May his soul rest in peace,” the BJP’s statement added, according to India Today.

According to news reports, at least 14 people died in political clashes since the election results were out on Sunday (May 2). The BJP claimed that six of their supporters/workers were killed, taking the toll to nine. On the other hand, TMC claimed four of their workers died.