Additionally, TMC’s biggest strength here is their organisation, which might give the party an advantage over BJP. South 24 Parganas, Bengal: Paltu Biswas of Srichanda gram panchayat, Mograhat 1 block in South 24 Parganas district, was extremely angry with the Trinamool Congress (TMC) as he levelled charges of durniti (corruption) and dadagiri (high-handedness) against the party.

“These chors (thieves) have siphoned all the money during Amphan. Those people who lost their house didn’t get the money, while TMC men with two-storey houses got the compensation. After some intervention, some people received Rs 5,000 instead of Rs 20,000 as promised by the government,” said Biswas.

On probing a little further, Biswas said, “There was development in the area in the past ten years. Didi (West Bengal chief minister Mamata Banerjee) has worked really hard for the state. But her party men in panchayats are corrupt. Common people are tired of the dadagiri by TMC party men. Didi should take action against them.”

Finally, when asked if he wants to change the government, he said, “My vote is for Didi. She is working for us. True that I am angry with TMC, but I want Didi to stay. Is there an alternative? BJP’s Dilip Ghosh is a goonda (goon), why will anyone want him?”

South 24 Parganas is one of the largest districts of West Bengal, with 31 assembly constituencies. The Wire travelled to areas such as Kakdwip, Sagar, Kulpi, Magrahat Paschim, which fall under the Mathurapur parliamentary seat, and Diamond Harbour and Falta, which come under the Diamond Harbour Lok Sabha seat.

This is the only district where the Bharatiya Janata Party (BJP) did not win any seat in the 2019 Lok Sabha elections, despite bagging 18 of the state’s 42 seats. In fact, the saffron party failed to even lead in any of 31 assembly segments that are distributed among the district’s five parliamentary constituencies.

Political analysts opined that if the TMC is to retain power, it needs to perform well in South 24 Parganas. Since the 2008 panchayat election, the district has been one of the bastions of the ruling TMC.

According to the 2011 census, 63.1% of the district’s population is Hindu, while Muslims make up 35.6% of the population and are mostly centred in areas like Bhangar, Canning, Magrahat, Maheshtala, Diamond Harbour and Baruipur.

Going by these statistics, the TMC should have a considerable edge over its opponents in South 24 Parganas. But a lot has changed in the district since the last parliamentary election.

First, the BJP was able to polarise the people on communal lines. Second, anger against the gross mismanagement in the aftermath of cyclone Amphan was visible. 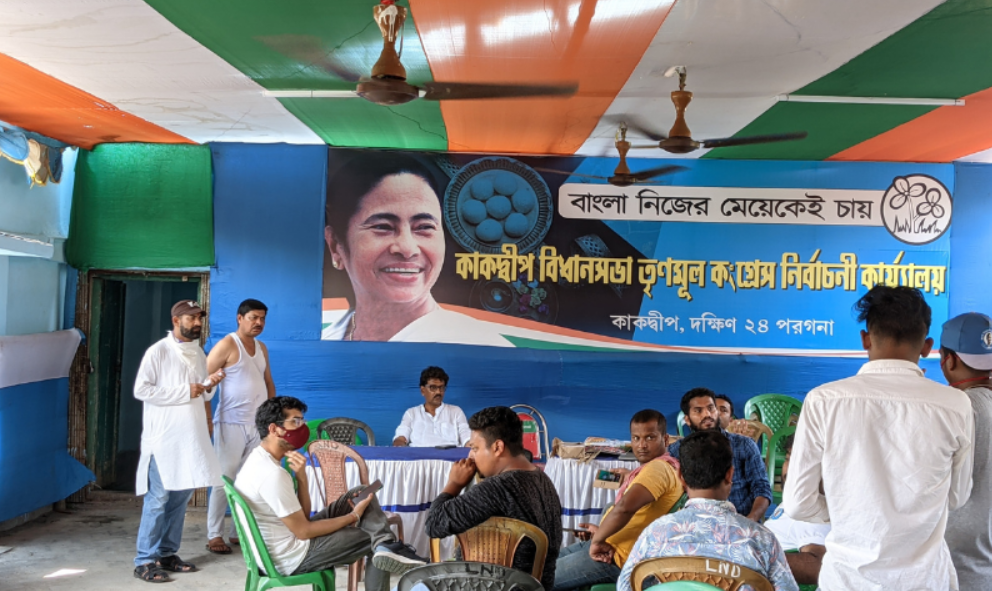 Poristosh Mistry, a resident of Karanjali gram panchayat in the Kulpi assembly segment, complained that he has received no compensation from the government despite submitting all necessary documents to the panchayat.

“People from the panchayat office came and took photographs of our wrecked house. Even then, I haven’t received the money. How can the panchayat leaders do this with our lives?” questioned Mistry. When asked about the election, Mistry said, “I was a TMC supporter but I want to teach them a lesson this time. I am not angry with Didi. She tried her best to help us, she even directed the BDO office to take control of the distribution. But it is the panchayat leaders who looted the money.”

The cyclone battered six districts of the state, but particularly wrecked two districts adjoining Kolkata — North and South 24 Parganas. The Wire had travelled and reported from these districts three months after the cyclone and found there was gross misappropriation of relief materials. The Wire also found that nepotism and political favouritism played a role in the disbursal of funds at the panchayat-level.

Twenty-eight-year-old Bappa Ghosh owns an electric rickshaw and ferries passengers between Usthi bazar and Netra. He is from the Debipur gram panchayat, which comes under the Falta assembly segment. He said, “We haven’t got any financial help from the government. But received a tarpaulin and a food kit two-three days after the cyclone struck. TMC panchayat leaders took most of the money. People whose houses were destroyed didn’t get anything, but people with two-storey houses got compensation.”

When asked if he got any help during the lockdown, Ghosh said, “Yes, panchayat leaders gave us some food kits. Otherwise, the free rice by the state government benefitted us the most.” When asked who he will vote this time, he said, “I couldn’t study because we had no money. Today, my sister is studying because this state government gave her a cycle through the Kanyashree scheme [for the girl child]. I know they have done wrong during Amphan, but we all make mistakes. This government should at least get another chance.”

Shaukat Mir, 65, was reading a newspaper, sitting at a roadside tea stall in Hatugange bazar. When asked about what will happen in the upcoming election, he said, “Sarkar ashbe, sarkar jabe; amra jekhanei chilam sekhanei pore thakbo (Parties will come to power; parties will lose power; there is no improvement in out conditions).” 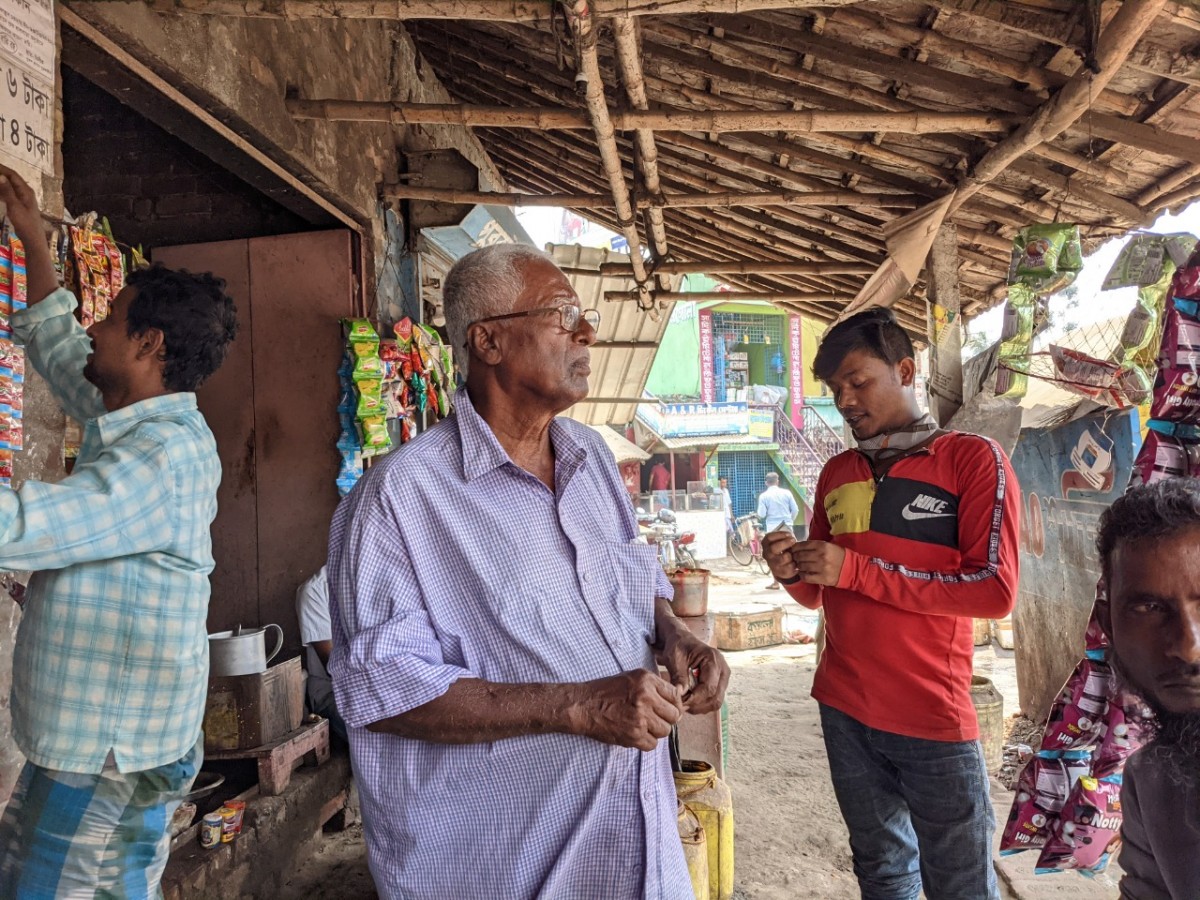 When asked if he’s angry with the current government, Mir said, “Is there a reason to think otherwise?” Asked if he will vote against the TMC, he said, “What change? Change to bring the same thieves? What good has BJP done after coming to power in 2014? Now in Bengal, all thieves and betrayers from the TMC joined them.”

When asked if he will vote for the Left-Congress alliance, he said, “Never. I will vote for Didi. Can anyone say she has taken money? Or that she is involved in any scam? I am angry with local TMC leaders, all of whom betrayed her and are thieves. But that doesn’t mean we will vote for a dangabaj (rioters) party.”

Like Mistry, Mir, Ghosh and Biswas, many in the region complained against the state government’s handling of granting compensation in the aftermath of the cyclone. The resentment will definitely have an electoral impact. However, many still want to vote for the TMC, considering Banerjee’s work, especially the welfare schemes she launched over the past ten years.

In Bengal’s elections, the organisational strength of a party plays a crucial role. The TMC as a party seemed to be in tatters after the 2019 Lok Sabha election, when its tally was reduced to 22 seats from 34. This particular district, however, remained a fortress for the party.

A drive through the Diamond Harbour Road illustrates the TMC’s presence in the district. Both sides of the road were wrapped up with party flags and cutouts of TMC candidates of that particular assembly.

Every four-five kilometres, one can witness mini trucks decorated with cutouts of candidates, party flags and speakers atop canvassing. Inside the villages, electric rickshaws can be seen doing the job of mini trucks.

Compared to this, the BJP’s visibility is significantly muted, with some flags fluttering here and there. A local journalist from the area, who didn’t want to be named, said, “There is definitely a surge in the number of people inclining towards the BJP in the state, and this district is no different. Also, the BJP is not being able to control their infighting in parts of this region. Since the ticket distribution, many workers and lower rank leaders have become inactive. The TMC’s biggest strength here is their organisation, that’s why the party has an advantage over BJP.”

Even some BJP workers in Raidighi and Diamond Harbour area concur with the opinion of the journalist. One of them said, “TMC’s Diamond Harbour MLA Dipak Halder joined the BJP a month ago.  Now, the party has given him a ticket from the same area. Is this justified? His men tortured us and our own party chose him as our candidate. This is nothing but betrayal.”

The saffron party has nominated TMC turncoat Santanu Bapuli from the Raidighi constituency. However, BJP workers in that area weren’t sure if Bapuli is still in the party or not. Poritosh Mondal, a BJP worker of Raidighi’s Debipur area said, “He hasn’t even come out for campaigning. We don’t even know if he with the party or not. We have deserving people who should have benn the candidate from Raidighi, but the party chose him. We can’t win elections like this.”

Bapuli was named as the BJP candidate on March 15. Since then, Bapuli has been inactive in the BJP media group, where the party shares information about a candidate’s campaign schedule, posts photos and videos from the campaign.

In this district, the saffron party adopted a different method to polarise the electorate on religious lines. More than the hardline anti-Muslim fiery speeches by the leaders, the party is doing a whisper campaign in targeted areas.

Gour Hari Pal of Kakwdip, who owns a tea stall said, “This time, I will vote for ‘Jai Shri Ram’.” When asked what is the reason for his choice, Pal said, “TMC has become the party for Muslims. It was never like that before. If Muslims can have their own party like bhaijan (Abbas Siddique) did, why can’t we have a Hindu party and vote for them?” 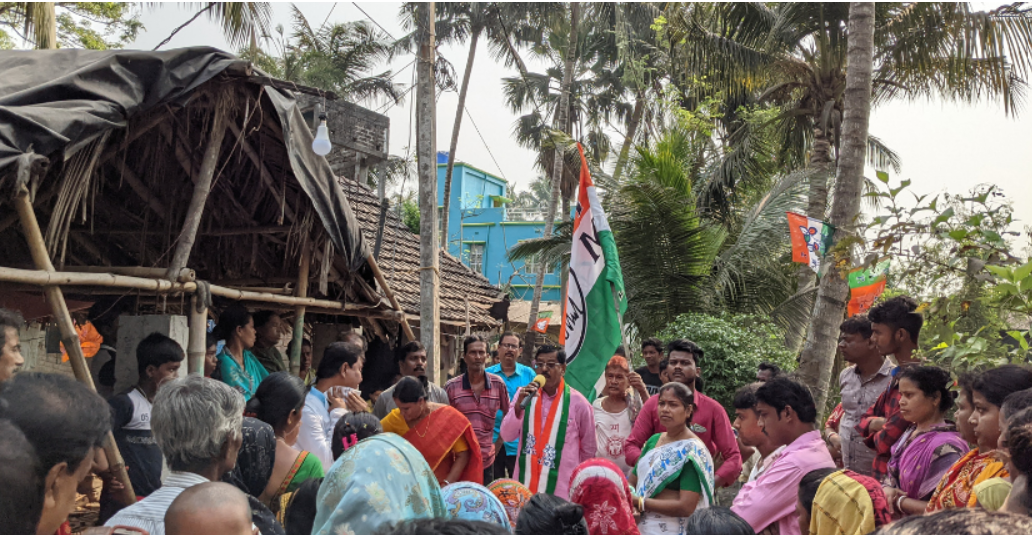 Samir Das, 31, used to be a CPI(M) supporter, but in 2016 he started supporting the BJP. According to Das, over and above the developmental issue, this election will decide “who will rule Bengal – Hindus or Muslims.” When asked if he thinks of the TMC as a Muslim party, he said, “Is TMC a Muslim party or not is not the concern. They do Muslim toshon (appeasement) and there is no doubt in that. Now, Abbas Siddique also started a party. So, we should also take care of ourselves and that’s why BJP is needed.”

After Das was informed that Abbas Siddique is not a partnet of the TMC, but is part of the Left-Congress alliance, Das said, “All are the same. They all have the same understanding.”

Debabrata Maity, the TMC leader from Kakdwip, alleged that the BJP is running many smear campaigns against his party on WhatsApp. In one of them, they claim that Siddique is with the TMC in order to “communalise the voters”, Maity said.

Abbas Siddiqui is a cleric of the prominent religious Furfura Sharif shrine in Hooghly. He floated a party called the Indian Secular Front (ISF) in January. The ISF is contesting 26 seats in alliance with the Left Front and Congress.

While young Muslim voters are showing some inclination towards ISF, the older generation has a different opinion. Many in the Muslim community feel that in this election, they can’t take chance as the BJP is using all its might to come to power in Bengal.

Twenty-six-year-old Noor Jamal Naskar, who is pursuing post-graduation in English literature, said, “Some young people are showing interest in Siddiqui because they love how he talks, they like his style.” When asked if he thought likewise, he refused to comment.

Mohit Ali Mollah, 54, from Magrahat, said, “Siddiqui is saying he wants to work for the people because he cares about them. I have one question for him, where was he when Amphan struck? He did nothing then. Now, two months before the election, he started a party and suddenly started caring for people. Are we fools?”