Where there was once TMC supremacy, there is now an atmosphere so tense that residents scarcely agree to talk politics. 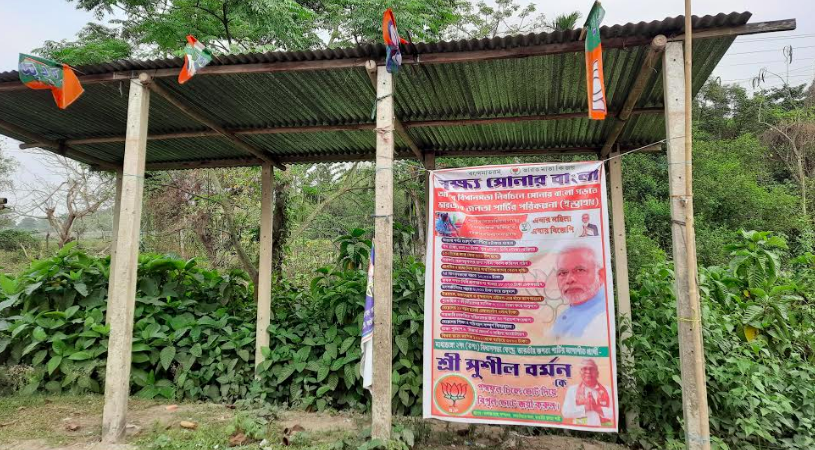 At many places in the district, the BJP has put up put up banners and festoons stating their development plan. Photo: Snigdhendu Bhattacharya

Cooch Behar: “The atmosphere is tense,” the tea stall owner at Panchanan More said, almost in a whisper.

He appeared to be a supporter of the state’s ruling party, the Trinamool Congress (TMC), but was apprehensive of the party’s electoral fate in the district. The area was within Mathabhanga constituency, which borders the Sitalkuchi assembly seat. The polls was held here on April 10.

On April 7, the Bharatiya Janata Party (BJP) state unit president Dilip Ghosh’s convoy came under attack at Sitalkuchi area, allegedly from TMC supporters, while on the same day TMC supporters had alleged obstruction of their supporters by BJP workers at three separate places when they were going to attend a TMC rally.

On the election day, five lives were lost at Sitalkuchi. 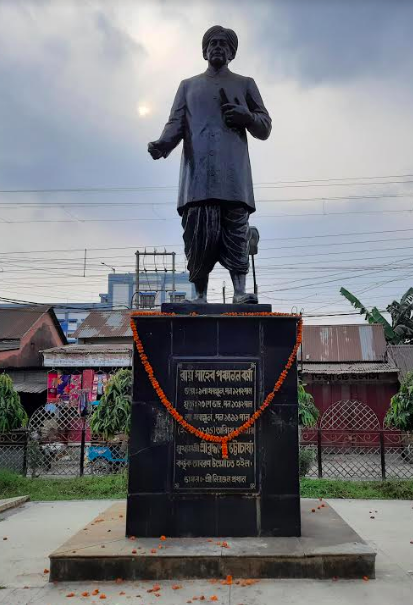 His tea stall’s location, popularly known as Sitai More and formally as Panchanan More, is named after Panchanan Barma, a social reformer and one of the biggest icons of the Rajbangshi community, an ethnic group peculiar to north Bengal and Assam.

A black statue of Barma stands tall at the square and from its cleanliness, it appears that the statue has drawn significant attention in recent times. The Rajbangshis are the state’s largest Scheduled Caste (SC) group and make up nearly one-third of the district’s population, according to the Census of 2011.

Fifteen or 20 years ago, people talking of tension in the area would have meant the statehood agitation. The Kamtapur Liberation Organisation (KLO), a militant outfit seeking to free six north Bengal districts and four lower Assam districts ‘from Indian occupation’ was founded in 1995 and its activities, including violent ones, started escalating from the beginning of the new century.

While the KLO’s strength significantly reduced after Operation Flush Out in Bhutan in 2003, another organisation named Greater Cooch Behar People’s Association (GCPA), demanding a separate state of Greater Cooch Behar, started gaining ground from 2003-04 and in 2005, an agitation by the GCPA led to the death of three policemen and two GCPA supporters in Cooch Behar district. The police followed up with a crackdown.

Those movements have died down in recent years. Most of the leaders of the movement, including militants, had either surrendered or been jailed. After release, they have mostly been engaged in democratic activities. The organisations have undergone splits as well.

Tension near Panchanan More area, a day ahead of the April 10 assembly elections, was electoral and communal in nature. The BJP dealt the TMC a massive blow in the 2019 Lok Sabha elections and was looking to make a sweep of the district’s nine assembly seats this time, while the TMC was desperately trying to stage a comeback.

“The Hindu-dominated localities in these areas are mostly pro-BJP and the Muslim-majority pockets are pro-TMC,” said the manager of a local hotel who did not want to be identified.

Going by the Lok Sabha election trends, the BJP had comfortable leads over the TMC in seven of the nine assembly seats, while the TMC had leads in Sitai and Sitalkuchi. The last two has the district’s highest Muslim concentration.

Of them, Sitalkuchi was tenser than Sitai. In the latter, the TMC had a comfortable lead over the BJP and was considered the favourite in the contest. But in Sitalkuchi, the TMC’s lead over the BJP was a marginal 1,500 votes. To make the situation more favourable, the TMC fielded their district unit president, former Cooch Behar MP, Partha Pratim Roy. The contest, everyone knew, was close. 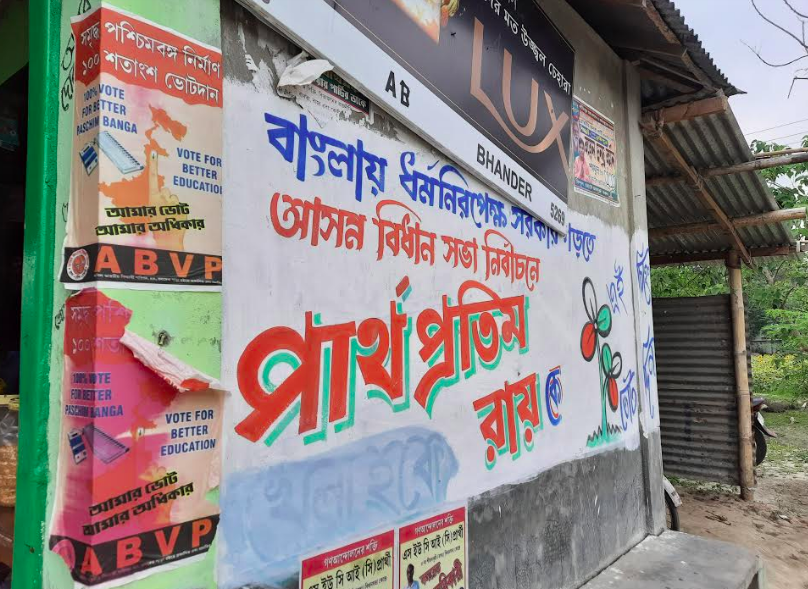 Tension was palpable at Patakamari area, within Mathabhanga assembly constituency, too. Grocery shop owner Mahendra Ray, also a Rajbangshi, recalled how the nature of political violence changed in the district over the past two decades. At the beginning of the century, it was the separatist and statehood agitations, which lost momentum by the end of the Left Front rule.

After Mamata Banerjee came to power, the TMC poached a number of Left leaders, including of the CPI(M) and the Forward Block and literally turned the district free of political opposition.

“Then, the TMC’s internal conflict led to a series of clashes between warring groups of TMC supporters. People were fed up with the internal feud and voted for the BJP in the Lok Sabha elections. BJP in the district are basically disgruntled TMC leaders. Violence continued unabated though, this time between the TMC and the BJP,” Ray said.

Incidents of infighting increased largely in 2018 when clashes between groups of TMC supporters became routine. In one case, a group of TMC supporters allegedly even chased a TMC leader down to a nursery school and shot him on the school campus. That incident started turning public sentiment against the TMC, as the people were looking for an end to the internal feud-related clashes.

A day before this journalist’s talk with Ray at his shop, at a place called Sildanga, barely 5 kilometres away, the local TMC candidate, Girindranath Barman, was attacked, allegedly by local BJP supporters. He had to be hospitalised.

When it comes to change of camps of local politicians, Mekhliganj presents a perfect picture. The candidates of the TMC, the Left and the BJP are all former leaders of the Forward Bloc, the Left party that held influence over the district for several decades until Mamata Banerjee came to state power in 2011. 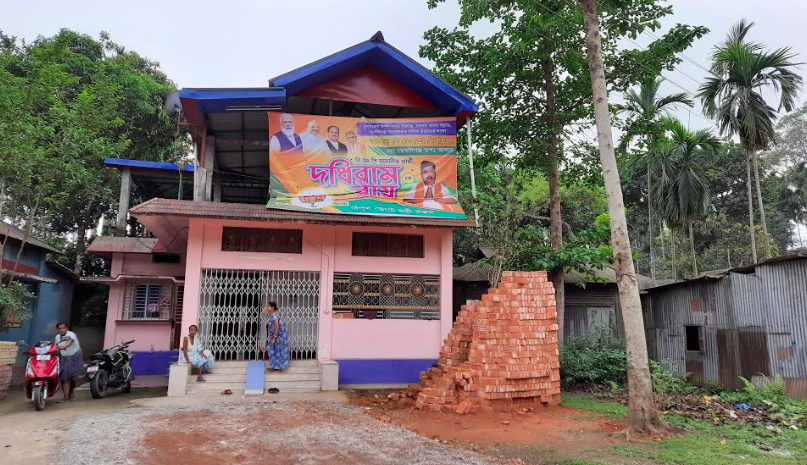 Mekhliganj’s TMC candidate is former Left Front minister Paresh Chandra Adhikary, who lost the 2019 Lok Sabha elections fighting on a TMC ticket to BJP’s Nishith Pramanik, who had come from the TMC. Now, Adhikary is facing the BJP’s Dadhiram Roy, once a close aide of Adhikary when he was in the Forward Bloc. The Congress-backed Left candidate, Gobinda Roy, is also from the Forward Bloc.

The BJP has left no stones unturned to establish its supremacy in the district. To defeat Dinhata’s two-time TMC MLA Udayan Guha – whose father Kamal Guha was a veteran Left Front minister, six-time MLA from Dinhata and one who had the last word in Cooch Behar district for several years – the BJP has brought its Lok Sabha MP, Nishith Pramanik, to the assembly election contested and fielded him against Guha, who also serves as the chairman of Dinhata municipality.

When in the TMC, Pramanik had the image of a strongman and was expelled from the party after the 2018 panchayat elections, when his followers contesting as independent candidates defeated TMC’s official candidates in several seats. After bagging a BJP ticket, Pramanik trounced the TMC in 2019.

Just like Dinhata, most voters in Natabari areas preferred to remain silent when asked to comment on the political situation.

“It’s not good, it’s tense, it can get worse after the elections,” said Bibhas Chowdhury, a private tutor at Shyamganj area within Natabari assembly segment, from where the state’s outgoing north Bengal development minister Rabindranath Ghosh is contesting for his third term in the assembly.

On election day, Ghosh was seen visiting polling stations wearing a helmet. He told journalists he was trying to protect his head from probable attacks by BJP supporters.

“Everybody knows it’s Ghosh who terrorised people. However, now if he himself feels terrorised, it means the ground under his feet is shifting and he knows this,” Pramanik said. 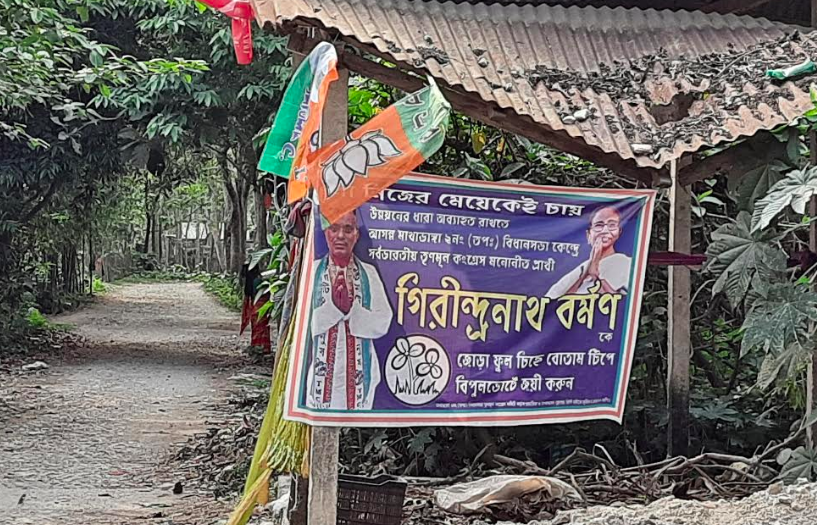 A banner in support of TMC’s Mathabhanga candidate Girindranath Barman, who was attacked, allegedly by BJP supporter, two days before the elections. Photo: Snigdhendu Bhattacharya

Apart from political tension, the other thing that could be felt across the district was communal polarisation. Among organisations belonging to the Rashtriya Swayamsevak Sangh (RSS) family, the Akhil Bharat Vidyarthi Parishad (ABVP), the Hindu Jagran Manch and the Bajrang Dal have carried out extensive campaigns in different parts of the district, urging people to dethrone a government that prioritised “appeasement of the minorities” over Hindus.

In Cooch Behar, Muslims make up one-fourth of the population, while people from Scheduled Caste communities make half of the demograph. Understanding that the party had lost the majority of the Hindu votes in the district, the TMC has not fielded a single Muslim candidate in the district.

Pundibari resident Krishna Saha, a government employee in the district health department, however, has doubts if the TMC’s overture towards the Hindus will benefit them. “There seems to be quite a strong wave of Hindu consolidation prevailing over large parts of the district,” said Saha, a voter of Cooch Behar Uttar assembly constituency.