The fight over free speech is about the institutional protection of individuals' basic rights from mob rule and putting a check on the state's coercive power. 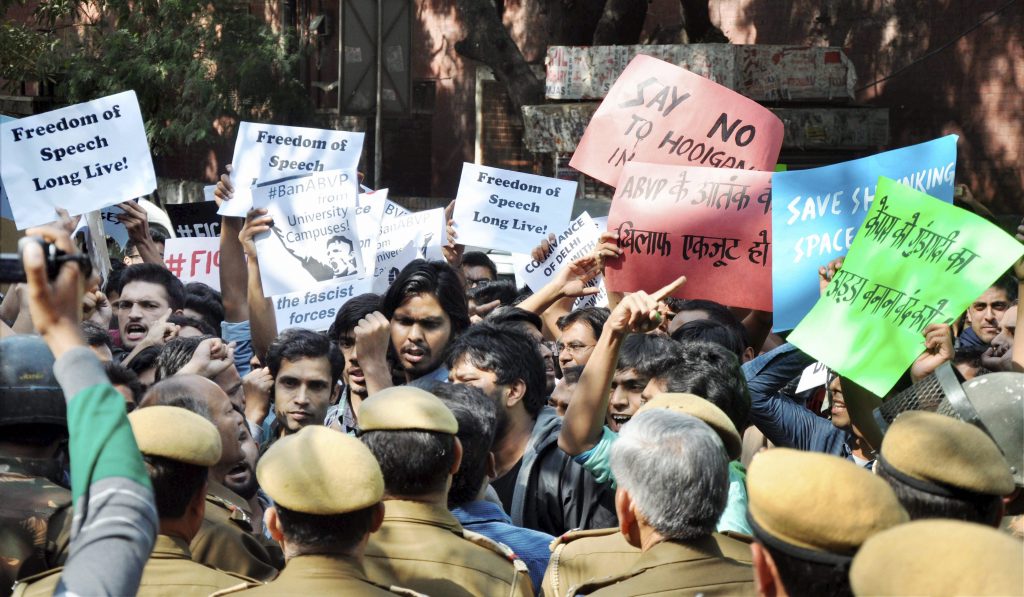 A few weeks ago, finance minister Arun Jaitley was at an LSE event where he was asked about last month’s Ramjas College incident. In response, Jaitley said that freedom of expression is fine but stops at “anti-national” discourse. He also condemned violence of any kind, as one would expect, saying that the law would take its own course in dealing with miscreants. Very responsible and very correct.

Fast forward a few weeks, to the landslide victory of the BJP in UP and its choice of Yogi Adityanath as chief minister.

Adityanath’s frequent fiery and provocative remarks have always had more of a flavour of vinas than vikas to it. These have tested the boundaries of freedom of speech, occasionally being disowned even by his own party. Yet now he is the face of the state. There are now reports of a Bengaluru woman facing a police case for her critical Facebook posts on him. To paraphrase Orwell, all citizens are free but some are evidently more free than others.

Now, one can debate if incendiary speeches against the largest minority group in the country is anti-national or not in the same way as chants of azaadi are. One may also point to the equally incendiary speeches made by politicians belonging to other political parties, or to the gross violations of freedom of expression where the perpetrators belong to the minority community, such as the recent incident of a man being killed for refusing to take down a WhatsApp group on atheism.

What Joan Robinson once said about ideology is equally applicable to charges of intolerance – it is like bad breath; easy to recognise in others but not in ourselves. But whether it is whataboutery (what about the other community’s acts of intolerance?) or the apologist tone of what Salman Rushdie described as the ‘But Brigade’ in the aftermath of the Charlie Hebdo incident (yes, that was bad, but you have to understand the provocation and the rage of the oppressed), it traps us in a debate about selective outrage that can never end.

After all, no political party in India can claim that they have been faithful in their commitment to the freedom of expression once in power (though the degree of deviation differs, sometimes significantly). Similarly, one should not look at any violent incident in isolation without grasping whether one set of injustices may have provoked another one.

But the problem is, where does one go with these arguments? Should we accept that bad things happen all the time and, therefore, not even try to have justice as an ideal, and only rely on strong leaders who will bypass the “system”? This is a dangerous slippery slope. After all, a murder is a murder, a rape is a rape, a terrorist attack is a terrorist attack and a riot is a riot, irrespective of who is the victim and who is the perpetrator.

Rather than focus our outrage on every provocative thing that is said, we should direct it at the failure of our system of law enforcement that allows murderers, rapists and rioters to go scot-free. While the US system is far from ideal, the fact is, within hours of the racially motivated shooting incident that led to the death of an Indian-origin engineer in Kansas last month, the perpetrator was arrested and now faces the prospect of life in prison.

Where the rule of law works reasonably well, there is a legitimate debate to be had about the limits of freedom of expression in a democratic society. Supporters of freedom of expression focus on the voluntary aspect of it, saying, for instance, that if you don’t like a book, don’t read it. Their opponents argue that what is voluntary to a person or a group can indirectly harm a third party, such as the proverbial act of crying “fire” in a crowded theatre. This is a debate with many nuances. And it is an essential debate.

But that is not the debate we are having in India right now. The fight over freedom of expression in India is a shadow fight. The real fight is about preserving the sanctity of our law enforcement and judicial institutions to protect freedoms of any kind, when the brute force of state power, drawing its strength from the support of the mob and an electoral mandate, threatens to make a mockery of it. Freedom that is not scrupulously protected by the rule of law from violations by other private citizens or the state machinery, is not a real freedom.

The fight over freedom of expression in India therefore is not over whether students should have the right to chant “anti-national” slogans in the Indian equivalent of an Ivy League campus or invite controversial speakers in a panel discussion. It is not about the right of a young college student, who happens to be the daughter of a soldier who died serving the country, to voice her opposition to war without being subject to the most horrendous abuse by internet patriots, or netriots as we might call them. It is not about the intellectual self-indulgence of intellectuals and elites, who have now replaced landlords and moneylenders as the new most-despised class, or their right to pontificate and push the boundaries of mainstream middle-class opinion and sensibility.

We must and should support all that, but if that was all that was at stake, then it could be likened to a luxury enjoyed by elites. Given all that is going on in the world that exhausts our capacity to be outraged on any given day, this may not seem like the most pressing issue. But a lot more is at stake.

The real fight is not over freedom of expression but over the freedom to do anything. It is about the institutional protection of basic rights of individuals from mob rule, as well as about putting a check on the coercive power of the state. Those who attack particular forms of speech or expression as allegedly hurting the sentiment of some group or other always choose the easy targets first.

First, it is something you write or say. Next, it is what you can eat or wear, what books you can read or what films you can watch. After that it is who you can be seen with or marry, whether you can go to vote peacefully, whether the police looks the other way while the mob destroys a legal establishment that is your source of livelihood (like the meat shops that were attacked in UP) or a place of worship.

It is about the use of fear and intimidation to convert the argumentative Indian into the submissive Indian, a servile and passive Aadhaar card number who will conform to every whim of the government so that Big Brother can claim ‘all izz well’, every government initiative is succeeding wildly and India is shining so that foreign investors, friendly corporates and supportive commentators can croon about the country as a rising superpower. Anyone who doesn’t agree can be branded anti-national.

Given the significant number of elected representatives in India who have serious criminal cases against them and the long history of politicians in power (of all stripes) interfering with the due course of law and justice, the phrase “the law will take its own course” uttered by politicians, whenever his or her party supporters are involved in some rampant act of hooliganism, is more chilling than reassuring. In the same way as the phrase Don Corleone used in The Godfather to explain why a deal was “successful” – he made “an offer that could not be refused.”

The real fight is over the rule of law. Any debate about what is anti-national or what constitutes the limits of free speech, like Donald Trump’s tweets, are a calculated distraction.

Maitreesh Ghatak is professor of economics at the London School of Economics and has previously taught at the University of Chicago.