Battle for the Soul of India

Kanhaiya Kumar’s battle cry that the fate of India lies in the hands of its poor and oppressed may turn out to be more true than even he has bargained for. 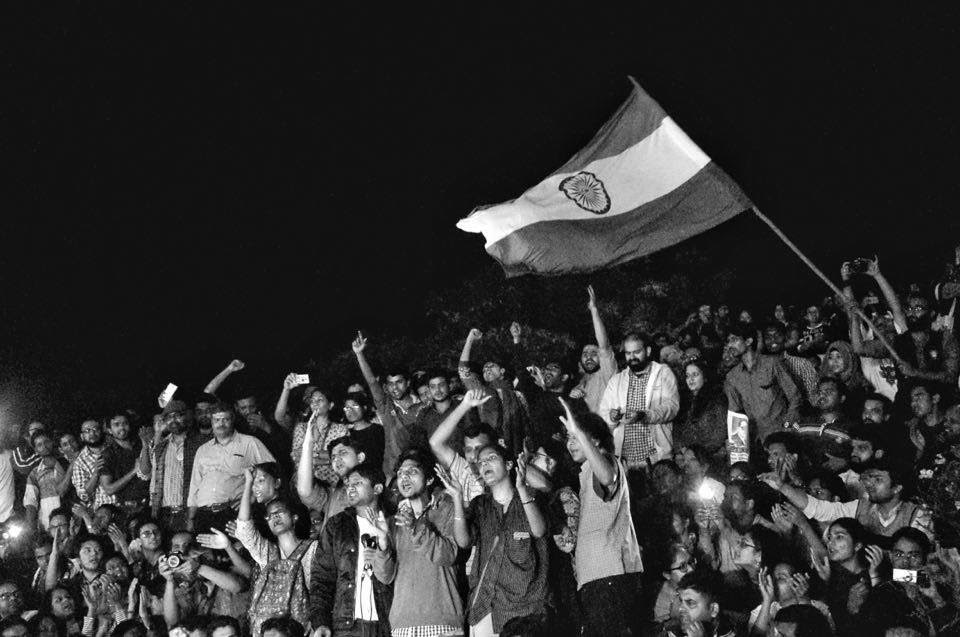 Students within the JNU campus celebrating the granting of an interim bail and subsequent of their union leader Kanhaiya Kumar, March 3, 2016. Credit: Shome Basu

What began on February 9 as a small protest meeting at JNU to mark the hanging of Afzal Guru has ballooned into a struggle that is without precedent in the country’s history. This is not the first  nationwide polarisation we have seen. Remember the debate over the Indo-US nuclear deal? Or Anna Hazare’s fasts unto death over the Lokpal Bill in 2011? But this polarisation is different. Those had occurred over what India should do, but this is over what India should be. The struggle that has begun now is over defining the soul of India.

For sixty nine years India has defined itself as a pluralist, secular, ethnically heterogeneous country  that has built its nationhood by accommodating diversity. This is now being challenged in earnest by the BJP or, to be more precise, the RSS, (the distinction between the two that was so sharp in Atal Bihari Vajpayee’s years has all but disappeared). The RSS has begun to fear that far from staying in power  for ten years, as Prime Minister Narendra Modi had confidently predicted shortly after the 2014 elections, the BJP may well lose its majority in 2019. This has left it far too little time  to implement its long cherished agenda for uprooting India from its pluralist-secular moorings and turning it into a “Hindu Nation”.

Its fears might run even deeper for after its shock defeats in Delhi and Bihar, it cannot be unaware that it may meet the same fate in Punjab and UP next year as the consolidation of the opposition that took place in Bihar is likely to be repeated there too. Those defeats, were they to take place, would turn the Modi government into a lame duck administration for the next two years. This is a possibility that the Sangh Parivar does not seem willing to contemplate.

How high the stakes for it are is revealed by how far it is prepared to go. Conspiracy theories should be treated with great scepticism, but everything that has happened since February 9 has the stamp of premeditation. When the Union Home Ministry decided to arrest JNU Students’ Union (JNSU) leader Kanhaiya Kumar on charges of sedition after four full days to search for seditious matter in his 23-minute address to JNUSU, it did so on the basis of a single Zee TV video clip  aired on February 10 that purported to show that students at the meeting had shouted ‘Pakistan zindabad’ slogans.  Last week a magistrate’s court ruled, on the basis of a forensic examination, that the tape was a fake and that the words Kumar was shown to have been spoken had been pasted on from another sound track.

This immediately raises the question about who doctored the tape? If someone was prepared to go so far, can we be sure that the pro-Pakistan slogans at the February 9 afternoon meeting had also not been planted? Can we even be sure any longer that the entire fracas at JNU was created not by Kashmiris from outside JNU, as presumed by Harshit Agarwal, an uninvolved third year student who posted a video of  the entire meeting on the web, but an ABVP ‘false flag’ operation from the outset?

Undaunted by this setback the RSS has hit back through its newly discovered star orator, Human Resource Development Minister Smriti Irani. On the day after Kumar gave his second speech in defence of democracy, the constitution, the rule of law, and the freedom of speech and thought, Irani counterattacked by turning the defence of her government over the death of Dalit scholar Rohith Vemula in Hyderabad  into a wholesale attack on anti-national and leftist elements, accusing Vemula’s fellow students of deliberately preventing the police from cutting down his body as he hung from the ceiling fan, and preventing doctors from seeing him for a full 12 hours, in order to ensure his martyrdom for their cause.

Her vitriolic speech went viral on the internet and Modi hailed it with the two-word tweet, ‘satyamev jayate’. Only a full 24 hours later did Indians learn that everything she said had been fabricated. Vemula’s family and friends said his body had been cut down from the fan as soon as it was discovered, and that the chief medical officer of the university had arrived within four minutes of receiving the students’ call, had examined him and pronounced him dead. What’s more, as the doctor said, when she examined him he had already been dead for several hours. The police had not been prevented from seeing his corpse, much less from trying to revive him.

But by then the Sangh Parivar’s attack on ‘anti-national, left-wing, Muslim-loving, pseudo-secularists’ was in full swing. While Kumar was in jail and his colleagues in hiding, the Sangh Parivar had posted another video that purported to show some  JNU students yelling pro-Pakistan slogans during a  clash between them and the ABVP. But students at the university had already recognised some of the slogan shouters as prominent members of the ABVP.

A few days later another clip went up reporting that thousands of empty liquor bottles and used condoms were recovered from JNU every day. And not perhaps by coincidence, Chandan Mitra, the Oxford-educated editor of the BJP’s mouthpiece, The Pioneer, sermonised that the time had come to close down JNU altogether.

The common thread that runs through these attacks is a casual disregard for the truth, and a willingness to use any lie, any rumour, any prejudice, any person and any means to serve the higher purpose of converting India into a Hindu State. Irani claimed that everything she had said in parliament was from the Hyderabad police report. But a comparison of what she said with what appeared in the report shows that she saw only what she wanted to see and filled in the blanks from her preconceptions.

More than anything else it is the Sangh Parivar’s total lack of concern at being caught lying that reveals the depth of the danger that Indian democracy faces, for it shows that facts no longer matter. Only myths matter because, with executive power already in its hands, these are all the BJP/RSS  needs to persuade the army and the police, even large parts of the judiciary, to do its bidding.

To say this is not to imply that the army, the judiciary or the police, will not demur if asked to enforce another Emergency. But their minds are being systematically prepared. The danger that they could be asked to do so is therefore too real to ignore.

How deeply the appeals to hyper-nationalism have resonated within the power structure of the country is reflected in the judgement handed down by Delhi high court Judge Pratibha Rani while granting bail to Kumar. Prefacing her judgement with a patriotic song she made it clear that she was granting bail only because the defendant was unlikely to abscond or be able to obstruct the dispensation of justice. But he had associated himself with unpatriotic slogans and actions, and needed to be educated in nationalism. What is more, she opined that mild doses of anti-nationalism should be treated through education. More severe cases may need surgical excision, as becomes necessary with gangrene.

Nowhere did this learned judge elaborate what constituted anti-national behaviour. Nor did she explain what she meant by the chilling word ‘surgery’. What she did not bother to hide was her virtual direction to a lower court that it should find Kumar guilty of sedition ‘for his own good’.

Days later, while admitting a criminal defamation case against Delhi Chief Minister Arvind Kejriwal, a district judge   made ex cathedra remarks that have all but pronounced him and five other Aam Aadmi Party leaders guilty without the benefit of a trial.

If this is the resonance that the BJP/RSS’s campaign can create in a judge of the Delhi high court, what is it creating in  the middle class? Internet provides us with a crude yardstick. Till last Wednesday noon Kumar’s post-bail speech had received 884,000 hits, while Irani’s speech in parliament had received 3.6 million hits. As for the Hyderabad chief medical officer’s testimony demolishing Irani, forget the TV anchors, even I have difficulty remembering her name.

Kumar’s battle cry that the fate of India lies in the hands of its poor and oppressed may turn out to be more true than even he has bargained for.

Prem Shankar Jha is the Managing Editor of Financial World and a senior journalist.