Balakot Airstrikes are a Replay of Modi’s Notebandi Strategy

Launch a ‘masterstroke’ of questionable effectiveness, make exaggerated claims and then attack those who question your claims as being ‘anti-India’ 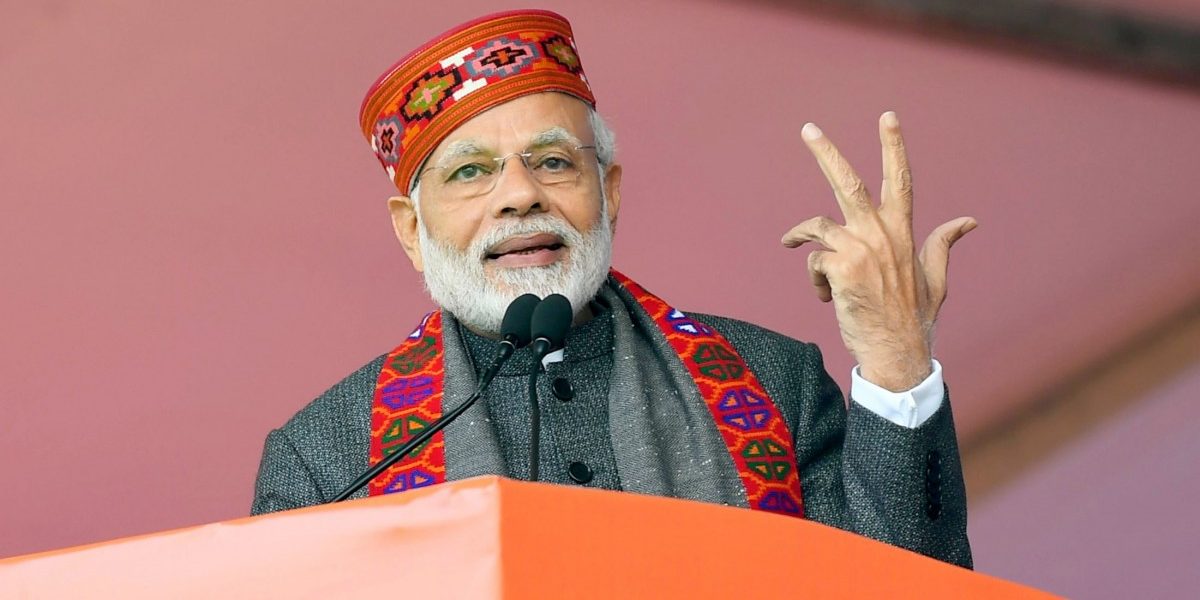 It was fascinating to view the wave of public approval that greeted the government following India’s airstrikes on Balakot. Celebrities vied with each other in extolling the move. Social media erupted in frenzied jubilation. The media eulogised the firm and decisive nature of the prime minister. Wild claims were floated in the media based on anonymous sources and ‘educated guesses’.

Most channels claimed anywhere between 250-400 terrorists had died and considerable terrorist infrastructure had been destroyed. Some claimed that the brother of Maulana Masood Azhar had perished. The consensus view was that this was a decisive blow against terror. The few pesky folks who questioned the wisdom of the decision were quickly shouted down, their concerns contemptuously dismissed. It reminded one of the initial heady days following demonetisation.

That was when anchors and spokespersons tried to convince the people that lakhs of crores of rupees would be returned to the public exchequer on account of not being deposited back. A time when anchors competed with WhatsApp forwards in reporting the most bizarre claims such as the reported nano GPS chip in new notes. The time when the media announced the impending demise of black money owing to this supreme ‘masterstroke’ of the PM.

It might be hard now to exactly remember that initial public mood after demonetisation. Just to capture the extent of the hyperbole that seemed normal at the time, the Indian cricket captain felt confident hailing demonetisation as the “greatest move in Indian political history”. To be fair to Kohli, he wasn’t the only celebrity extolling the move.

A flood of big names from the film industry – Rajinikanth, Amitabh Bachchan, Anushka Sharma, Rishi Kapoor, Anushka Sharma, Anurag Kashyap, Ajay Devgn – along with a host of smaller stars, took to Twitter to hail the ‘masterstroke against corruption’. Words like ‘paradigm shift’ and ‘game changer’ that are being liberally attached to this new phase in our ‘war on terrorism’ were then appended with this new phase in the ‘war on corruption’. 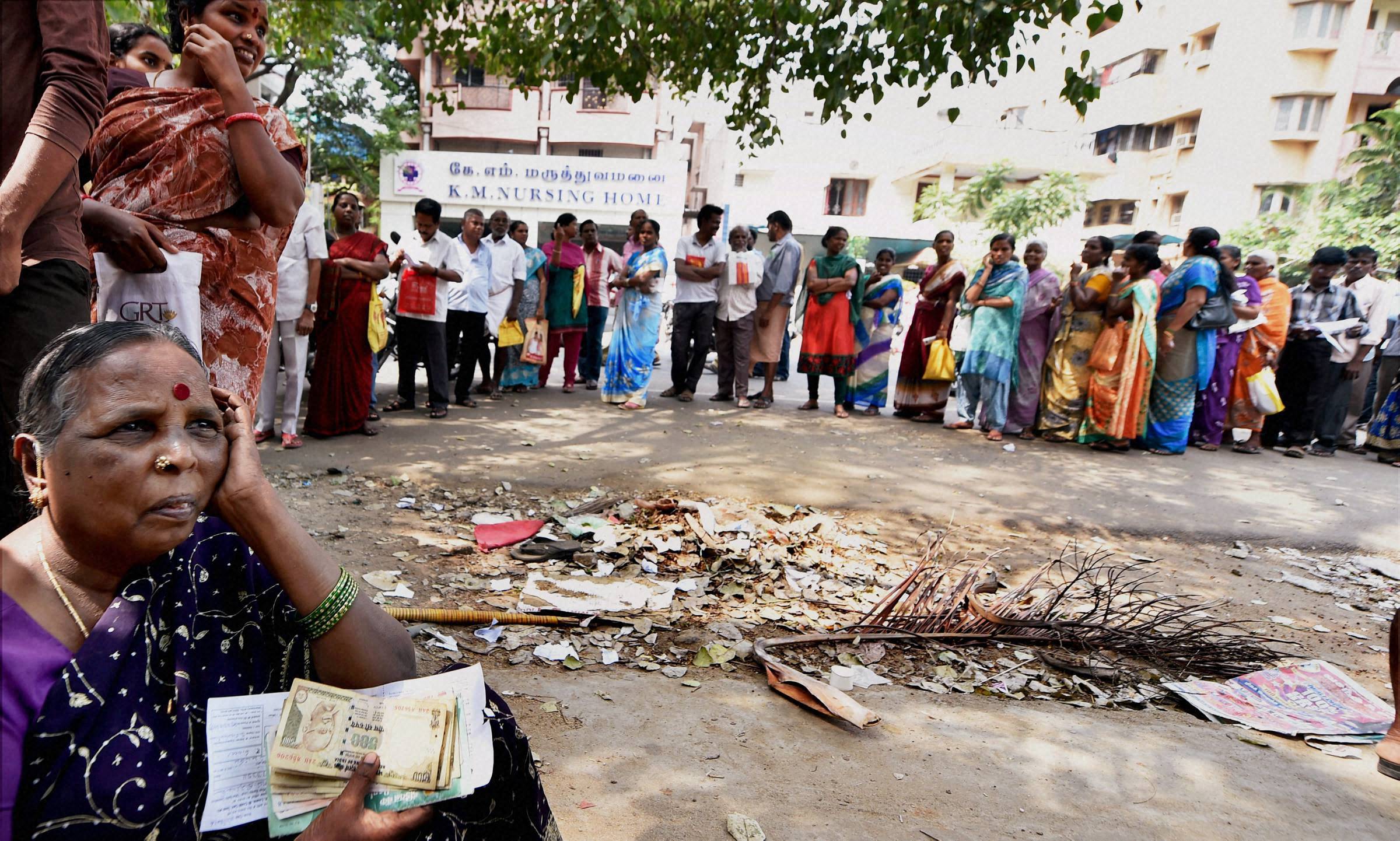 People standing in queue to exchange their old notes at a bank in Chennai after demonetisation. Credit: PTI

With one fell swoop, Modi, aided by a pliant media, changed the whole discourse and captivated the attention of the nation. It was timed, probably not coincidentally, just a few months before the UP elections. Corruption took centre stage in the ensuing elections, and the BJP strode home to a decisive majority. The prime minister has now undertaken an even more reckless adventure (given the nuclear shadow), timed on the cusp of the general elections. It seems geared yet again for a short-term political boost, with seemingly no regard for the attendant consequences. Unsurprisingly, it is unfolding exactly according to the demonetisation script – make a dramatic move, follow it up with wild claims of success, and then, most importantly, attack those who question the claims as being against the nation.

It is impossible to know today whether the strikes will turn out to be as fruitless in stemming terrorism as demonetisation was in checking corruption. But long before the answer is clear, Modi hopes he would already have cashed the electoral dividend.

Well, the verdict on demonetisation is in, and it turned out to every bit of the monumental blunder that sensible economists predicted it to be. Millions of jobs were lost and incomes evaporated, but the anchors, experts and celebrities that happily cheered the move escaped largely unscathed.

Also read | How Successful was Demonetisation? Four Takeaways From the RBI’s Annual Report

Much like demonetisation, the wild claims and hyperbole attached to the strikes are free of hard evidence. International news reports and satellite imagery dispute the government’s claim of hitting a terrorist camp and causing a ‘very large number of casualties’. The figure of 250-300 terrorists killed, floated by many including the BJP president, seems to have been conjured from thin air, quite like the lakhs of rupees that were supposed to be recovered by demonetisation.

A Mirage 2000 fighter jet, which India used in its airstrikes on Balakot. Credit: PTI

Even worse, far from the gloating in the domestic media, the consensus in the international media seems to be that India has lost the ensuing PR battle to Pakistan. The New York Times called the return of the captured Indian pilot a ‘humiliating episode’ for India. In another article, the newspaper asserted that India lost the aerial dogfight to Pakistan, which showed its lack of military readiness.

It is useful to remember that the point of the war on corruption was not really to fight corruption. It was to create a binary where the ruling party was the crusader and the opposition, and all critics of the decision were corrupt. “Those who are criticising demonetisation don’t have problem with the government’s preparedness, they have a problem because they didn’t get the time to prepare (their black money into white),” the prime minister had said at the time.

Similarly, one of the primary objectives of the war on terror Modi has just launched seems to be to intimidate the domestic opponents of the regime and to paint them all as “anti-national”. Even before anybody in the opposition had really questioned the strikes, the prime minister had already launched another ‘pre-emptive’ strike, this time at the opposition: “Sadly a few political parties, guided by their ‘Modi hatred, have started hating India now. When the entire nation supports our armed forces, a few parties here are suspecting them. These are the same people whose statements are helping Pakistan, and harming India,” the PM attacked, even before the captured Indian pilot had returned.

Also read | Boom or Bust: What Science Tells Us About What Went Down in Balakot

The alacrity of the PM’s attacks suggests that this was the plan all along. The grossly exaggerated claims of the success of the airstrikes are meant, by design, to bait the opposition into questioning those claims. At which point the government can hide behind the ‘sanctity’ of the army and demonstrate that the opposition is anti-national. This is right out of the demonetisation playbook. Not only do facts not seem to matter, but it is also apparently anti-national even to try to ascertain the facts. What matters is which side of the narrative you are on. If you don’t blindly support the strikes, you are by definition ‘anti-national’ – just how you were, by definition, corrupt if you didn’t support demonetisation.

Over the course of time, experts will determine the efficacy of the strikes, in terms of whether it caused any significant change in the behaviour of the Pakistani state or on the incidence of terrorism in India. The precursor to Balakot, the Uri ‘surgical strike’, certainly does not seem to have achieved any lasting objective except spawning a jingoistic Bollywood film.

It seems too simplistic and comforting a narrative that all that is needed to change the strategic calculations of the Pakistani state are a few strikes that apparently didn’t cause much damage, and were promptly replied to by Pakistan. It’s almost as ludicrous as the narrative that banning all cash will end black money. But simple narratives are indeed the most enticing. It remains to be seen whether we fall for it again.