The CBI's handling of the case has always depended on which political party is in power at the Centre. There is no reason to assume its attitude towards the prosecution of senior BJP leaders will not be coloured by the same factor. 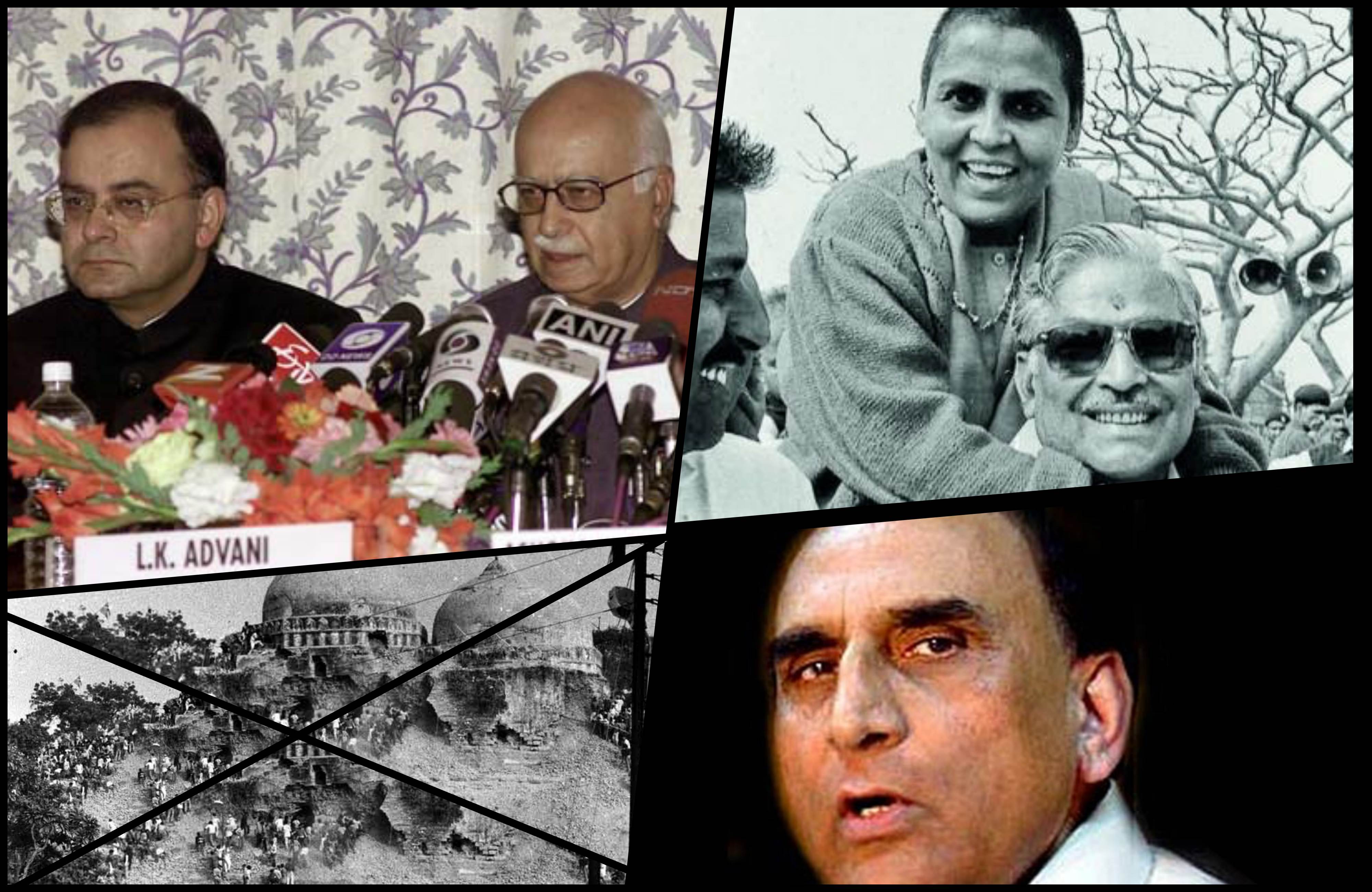 Arun Jaitley and L.K. Advani speak to the press in 2003; Uma Bharti and Murli Manohar Joshi celebrate the demolition of the Babri Masjod in 1992; former CBI director P.C. Sharma, who got the agency to drop conspiracy charges against Advani and other BJP leaders in 2003, and was rewarded with a 6-year term as member of the National Human Rights Commission by the erstwhile Vajpayee government; the Babri Masjid being demolished by Sangh parivar vandals on December 6, 1992. Credit: PIB, Special Arrangement, PTI, Special Arrangement

Last month, the Supreme Court decided that senior BJP leaders like L.K. Advani, Murli Manohar Joshi, Uma Bharti and others must be tried for the charge of conspiring to demolish the Babri Masjid and ordered that their trial in Lucknow be held on a day-to-day basis. On May 30, Advani and the others were formally charged with criminal conspiracy and then granted bail by the trial court on sureties of Rs 20,000.

Though the Supreme Court has fixed a period of two years for the trial’s completion, this is unlikely to happen unless the apex court directly supervises matters and also monitors the role of the CBI – the prosecuting agency – during the course of the trial. The trial court can give its verdict only on the basis of the evidence placed before it and it is the CBI that will have to provide the evidence. Unfortunately, the CBI’s past record in this case does not inspire confidence about its impartiality. The investigating agency has already shown three different faces in this case, lending credence to the belief that it is a  ‘Cover-up Bureau of Investigation’. There are many instances to prove this charge and even the apex court had described the CBI as a “caged parrot”.

The role of the CBI at different stages of the Ayodhya case has been questionable. In the first trial in the court of additional sessions judge (Ayodhya episode), Lucknow, Jagdish Prasad Srivastva, the CBI went all out to put the facts in evidence for framing of charges against the accused persons including Advani, Joshi and others for delivering speeches and conspiring to demolish the Babri Masjid. In para 36 of his order dated September 9, 1997, the judge, on the basis of evidence provided by the CBI, gave details of the role of Advani and Joshi, and how they started their rath yatra. “On December 1, 1992, Advani said in Kanpur that kar sewa does not mean bhajan and kirtan but it is meant for starting construction of Ram Mandir.” At para 9, the order said:

“On December 5, 1992 a secret meeting was held at the residence of  Vinay Katyar, which was attended by Advani and Pawan Kumar Pandey and a final decision to demolish disputed structure was taken. Their argument was that there was a ban on construction not on demolition. Thus the accused leaders assembled near Ram Janam Bhoomi/ Babri Masjid on December 6, 1992, and Advani categorically said in his public speech, before the demolition of disputed structure that ‘today is the last day of kar sewa, kar sewaks would perform last kar sewa’. When he came to know that central forces were proceeding from Faizabad to Ayodhya, he asked the public to block the National  Highway, so that the forces do not reach Ram Janam Bhoomi.  Prosecution has also contended that when disputed structure was being pulled down,. Advani asked Kalyan Singh not to tender his resignation till the disputed structure is completely pulled down.”

The court order had quoted the speeches of Advani made in Panchwati, Varanasi, Nagda, Bihar and some other places and the court said:  “The speeches made by Shri Advani created communal tension and he was arrested in Bihar against which there was a nationwide bandh’’.

In para 59, the trial court stated:

“It is concluded in the present case a criminal conspiracy to demolish the disputed structure of Ram Janam Bhoomi/ Babri Masjid was hatched by the accused persons in the beginning of 1990 and was completed on 6.12.1992. Shri Lal Krishan  Advani and others hatched criminal conspiracies to demolish the disputed premises on different times at different places. Therefore, I find prima facie case to charge Shri Bala Saheb Thakre, Shri Lal Krishan Advani, Shri Kalyan Singh, Shri  Vinay Katiyar…. (names of others), under Section 147/153A/153B/295/295A/505, Indian Penal Code read with Section 120-B of Indian Penal Code and they are charged under the aforesaid offences.”

The court also found a prima facie case against over two dozen persons under various other charges also. The Court had directed the accused persons to be present in the court on 17.10.1997.  But none of them appeared. The trial court had given its orders on the basis of the facts provided by the CBI to the court. Thus, this was a first phase of the CBI face.

Some of the accused went to the Allahabad high court against the notification issued by the government and the high court, February 2001, quashed the proceedings of case no. 198, dealing with conspiracy, before the trial court on technical grounds because of infirmities in the issuing of the official notification. The high court had said a fresh notification could still be issued on the question of trial on the conspiracy charge but the Rajnath Singh-led Uttar Pradesh state government obviously had no desire to do so. Even when the BJP lost control of UP, the fact that the NDA-led BJP government headed by Atal Bihari Vajpayee was in power at the Centre and at least three of the accused, L K Advani, Murli Manohar Joshi and Uma Bharti, were powerful central ministers, meant that neither Mayawati – who was chief minister from May 2002 to August 2003, with the BJP’s support – nor Mulayam Singh Yadav, who succeeded her, were prepared to issue a fresh notification for trial of the accused on the conspiracy charge. Mayawati made a public statement in Lucknow on September 17, 2002, that there was no need to issue a fresh notification by the state government in the Babri Masjid demolition case. A day earlier, on September 16, Arjun Singh then an important leader of the Congress party had raised the Babri Masjid issue in the parliamentary standing committee for home affairs, presided by Advani – and Advani was embarrassed by this.

In phase 2, the second face of the CBI

Taking advantage of the Allahabad high court decision to quash the conspiracy charges on technical grounds and the fact that successive chief ministers in UP – Rajnath Singh, Mayawati and Mulayam – refused to issue a fresh notification for trial on the conspiracy charge, the CBI in July 2003 quietly withdrew those charges against Advani and the others while filing a fresh charge sheet in the Rae Bareilly court. This created a big storm in both houses of parliament and almost the entire monsoon session was washed out that year. In the Rajya Sabha, opposition leaders like Manmohan Singh, Pranab Mukherjee, Kapil Sibal, Lalu Prasad Yadav, Arjun Singh, H.R. Bhardwaj and others had given notice for a short duration discussion. MPs from the opposition were not prepared to listen to the then law minister, Arun Jaitley against whom slogans were raised in the Rajya Sabha for manipulation of the CBI to delete the names of Advani and the others from the charge sheet, an accusation Jaitley denied. The opposition wanted only Vajpayee to reply to the charges. Arun Jaitley was accused of being a collaborator in removing the charge. At that time, Arun Jaitley was known as as the blue-eyed boy of Advani, whom Jaitley had also helped in resolving a dispute within his family too.

As a columnist for Punjab Kesari, I had published an article, which appeared as a lead story on July 21, 2003, alleging a deal between Advani and the then CBI director, P.C. Sharma. Sharma was due to retire in December 2003 – by a curious coincidence, in fact, on December 6, the anniversary of the Babri Masjid’s demolition – and according to the deal, I wrote that he may be appointed Lt. Governor of Delhi. Sharma, who was well known to me, sent me a legal notice through a lawyer close to Arun Jaitley. I mentioned this legal notice to the editor of Punjab Kesari on the day I received it. I had prepared my reply to the notice, but one evening P.C. Sharma’s former boss, R.C. Sharma, came to meet me and tried to persuade me not to reply to the notice as P.C. Sharma did not want to pursue it and pleaded that he had been “under pressure from the powers that be” to send me the legal notice. The same message was conveyed to me by H.R. Bhardwaj, the former law minister, whom P.C. Sharma used to visit quite often. As I had broadly indicated, the Vajpayee government made P.C. Sharma a member of National Human Rights Commission soon after he retired, a sinecure with a tenure of six years. This was the reward he was given, though the then chairman of the NHRC, Justice A.S. Anand (retd.), was not in favour of a policeman being a member of the commission. This, then, was second face of the CBI.

The CBI takes a U-turn again

The CBI took another U- turn in this case after the UPA government headed by the Congress party came to power in May 2004, and pressures were mounting on the Congress leadership from the Left, in particular from Harkishan Singh Surjeet of the CPM, Lalu Prasad Yadav and Ram Vilas Paswan, for follow up action in the Babri Masjid demolition case. The caged parrot, the CBI, started once again pursuing the Babri Masjid case, though with slow speed, for revival of the conspiracy charge against Advani,  Joshi and others, in the Allahabad high court and later in the apex court – which culminated in the judgment of the Supreme Court on April 19, 2017 ordering the trial of all the accused BJP and VHP leaders on the conspiracy charge under section 120 of the Indian Penal Code and also giving directions for day-to-day trial of the case.

The directions of the apex court are very specific and even the trial judge cannot be transferred till the trial is completed within two years. But more important than the judge is the fact that the evidence for the prosecution has to be produced by the CBI, and the trial court can give its verdict only on the basis of the evidence placed before it. In the present situation, can we say that the CBI is capable of functioning independently? If the CBI was happy to dilute the charges the last time the BJP was in power, what is the guarantee that it will act any differently under Modi?  It is for this reason that the trial should take place under the watchful eye of the Supreme Court, which must closely monitor the kind of evidence the CBI produces and how its witnesses behave. Only then will a fair trial be possible. The April 19, 2017 judgment of the Supreme Court has covered a lot of loopholes and put in place strict directions. But unless the CBI’s handling of the prosecution is itself monitored, there is no telling where the trial will lead.

G.S. Chawla is a veteran journalist