Top RSS leaders have camped in Delhi to liaise closely with the Centre.

New Delhi: A slew of recent meetings and announcements by both the Bharatiya Janata Party and the Rashtriya Swayamsewak Sangh on the upcoming Ayodhya verdict have indicated that while the Hindu parties appear confident the judgment will favour them, they remain apprehensive about how their own supporters and others may react to it.

The arguments in the Ram Janmabhoomi-Babri Masjid land dispute case had ended in the Supreme Court on October 16. A five-judge constitution bench headed by Chief Justice Ranjan Gogoi heard the matter daily for 40 days beginning August 6.

With Chief Justice Gogoi due to retire on November 17, the judgment is expected soon and hence the nervousness among political and social groups connected with the case.

Though BJP was not a party to the case, it led the Ram temple movement that culminated in the destruction of the mosque, for which several of its senior leaders were arraigned. But now that it is ruling at the Centre and many of the states, including Uttar Pradesh, it would be wary of the response to the verdict resulting in any kind of violence.

Similarly, the RSS, which is considered the BJP’s parent organisation, has been rather guarded in its approach towards the verdict. Many are finding this strange as only earlier this year at a conclave in Gwalior, its general secretary Suresh Bhaiyaji Joshi had stated, “It was expected from the government that it will bring an ordinance to clear [the] way for construction of Ram temple but it could not.”

He also added that “the Central government is committed to [the] construction of Ram temple in Ayodhya” and that the organisation’s “view on Ram temple has not changed. The temple will be built at the same place…as it is shown in picture”.

Ahead of the verdict, the Sangh’s voice has mellowed. It has also been brainstorming on the issue for several weeks now and has cancelled all major programmes and visits of leaders for the time being.

Several top RSS leaders – Suresh Bhaiyyaji Joshi, joint general secretaries Krishna Gopal and Dattatreya Hosabale and all-India publicity head Arun Kumar – have been continuously staying in Delhi to plan for the verdict and stay in close coordination with the government. 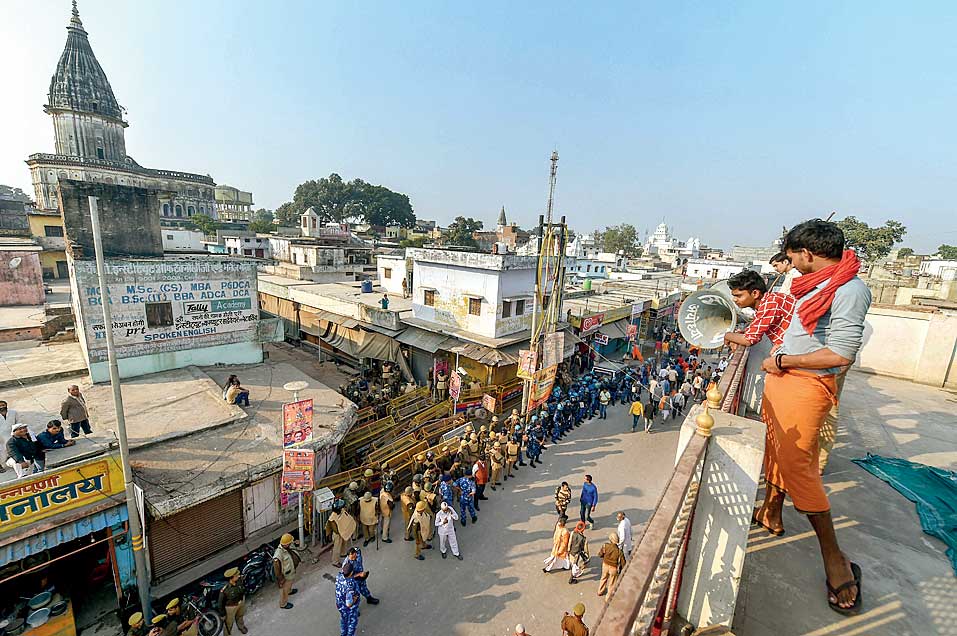 In fact, on Tuesday, leaders of both the BJP and RSS met Muslim intellectuals and representatives of Muslim organisations at the residence of Union minorities affairs minister Mukhtar Abbas Naqvi to discuss the issue.

Others present at the meeting included Aligarh Muslim University vice-chancellor Tariq Mansoor, who appealed to the people to be careful while commenting on social media. 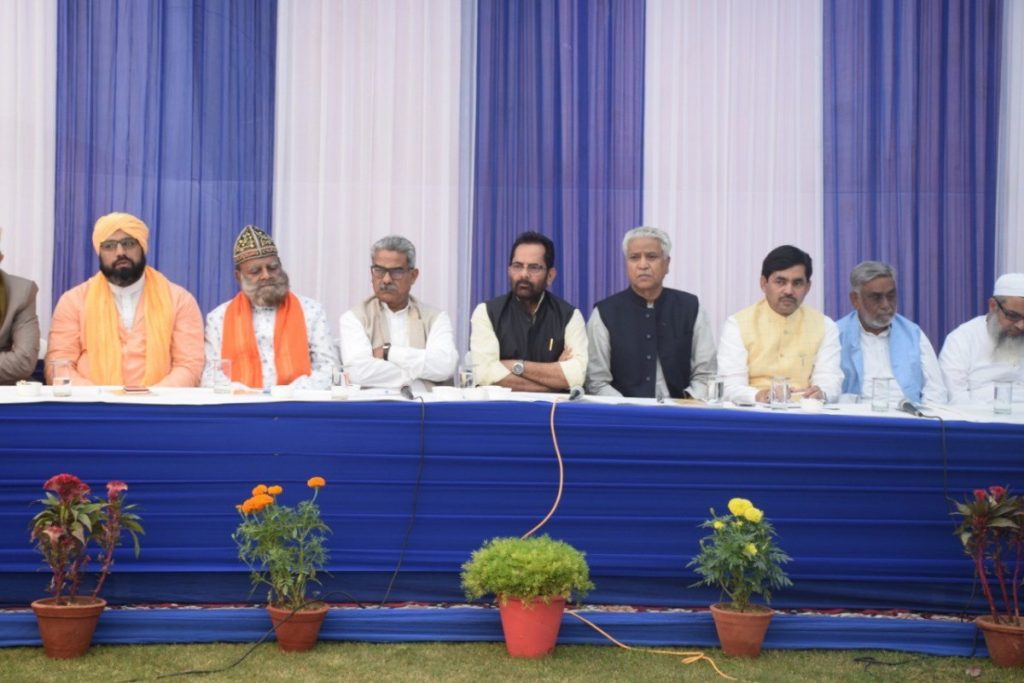 An image from the meeting at Mukhtar Abbas Naqvi’s house. Photo: Twitter/@naqvimukhtar

Later Naqvi tweeted that the “meeting was very constructive & fruitful”. He said it was decided that no matter which way the verdict went, excessive celebrations or mourning should be avoided. “Kahin par bhi jeet ka junooni jashn aur haar ka hahakaari hungama nahin hona chahiye, usse bachna chahiye (The verdict should not be celebrated excessively as a victory, nor should it be excessively mourned), he added.

Hussain told news agency PTI that “this verdict will strengthen the country” and noted that the dialogue between representatives of the RSS and Muslim community would continue in the future as well.

In the meeting, RSS representatives claimed that they have never spoken against the Muslim community. It was also demanded that other Hindu groups like the Shiv Sena and Vishwa Hindu Parishad be called in for future deliberations.

Incidentally, on Monday, the BJP convened a day-long meeting of its spokespersons at the party headquarters in New Delhi, where they were briefed on how to handle the media following the verdict. The spokespersons were told that there should be “no extreme reactions”, irrespective of which way the decision goes.

Also Read: Ahead of Ayodhya Verdict, UP Police to ‘Scrutinise’ Social Media Posts

This direction, many believe, came at the coaxing of RSS chief Mohan Bhagwat, who last week discussed the issue with various affiliates and cadres. He had also urged RSS-affiliated organisations to hold meetings across the country to ensure that no celebratory marches or events were organised if the verdict was favourable.

In fact, about a week ago during a meeting of the Akhil Bharatiya Karyakari Mandal, the highest decision-making body of RSS, in Bhubaneswar, Bhagwat had clearly stated that the organisation has no plans to celebrate a “victory” if the Supreme Court’s decision on the Ayodhya land dispute went “in favour of the Hindus”. He claimed that the RSS’s “tradition” has been one of “restraint”.

Earlier, a senior official of the VHP, which was closely involved with the Ram Temple movement, was quoted by The Hindu as saying, “The Sangh never celebrates victories. Have you seen us celebrating after [abrogation of] Article 370? We do not assess anything as a victory or defeat and this will be a court verdict [so] there is no question of victory or a defeat…it can be interpreted as victory of justice.”

However, in a clear indication of which way the right-wing organisations expect the verdict to go, this VHP official added that construction of the Ram temple was “expected to commence from the day of Makar Sankranti (January 2020)” and “end on the same day in 2024.”