The completely political nature of the bhoomi poojan event has led to murmurs among religious figures that the ritual was not conducted properly. The fact that the façade of religiosity was absent, seems to be bothering them. 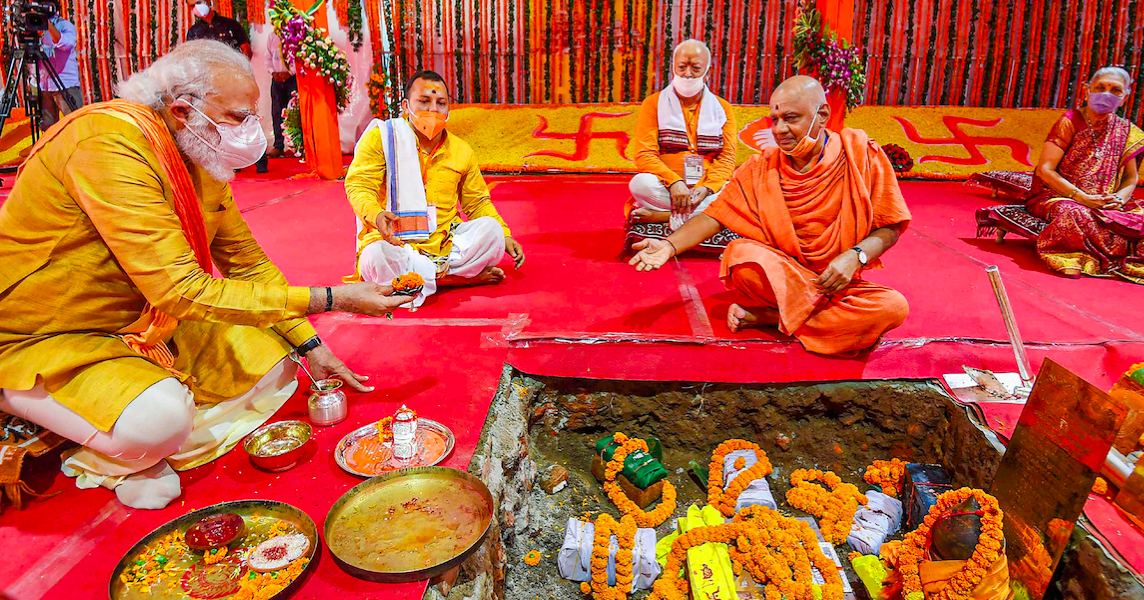 Lucknow: In an unusual move that has left everyone bemused, Prime Minister Narendra Modi chose to play an  all-encompassing role during the bhoomi pujan in Ayodhya on August 5. He was not only the chief guest but also the master of ceremonies and the official yajmaan (patron of a religious ritual) during the ceremony.

In certain quarters, an analogy has been drawn between Modi’s participation in the Ayodhya mega event and the presence of India’s first President, Dr. Rajendra Prasad, at the inaugural ceremony of the reconstructed Somnath temple in 1951.

However, the two instances cannot be compared. Unlike Ayodhya, there was nothing divisive about the inaugural ceremony at Somnath, since it was not performed at a site that was disputed or mired in a long-standing, contentious legal battle.

Conventionally, a prime minister would attend such an event as the chief guest, while the key rituals would be performed by a religious leader present on the occasion – in  Ayodhya, it would be someone like Mahant Nritya Gopaldas, who is not only the head of the old Ramjanmbhoomi Nyas and the newly formed, government-constituted Ram Janmabhoomi Teerth Kshetra Trust  but also the senior-most seer in the temple town. He has had a long association with the Ram temple movement. 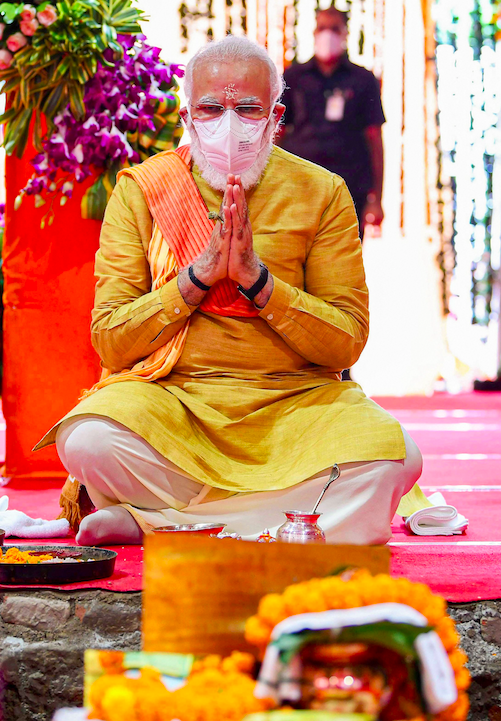 It is well known that Nritya Gopaldas was earlier sore about the fact that the formal ritual of transferring the deity of Ram ‘Lalla’ from the makeshift temple to an interim structure, to facilitate the new temple’s construction was carried out by the Uttar Pradesh chief minister, Yogi Adityanath. He was pacified only after he was named president of the Ram Janmbhoomi Teerth Kshetra Trust.

The puja could also have been performed by one of the Shankaracharyas, but they were not present at the ceremony. As for the 140-odd religious figures who were present at the venue, they were there only as a token presence and had little to do with the puja.

It was Modi alone who played a larger-than-life role that day, as if displaying a sense of ownership of the event. That was the message conveyed to 130 crore Indians, to whom he made repeated references.

Meanwhile, with all the frontline leaders of the temple movement being kept away on the day of the bhoomi poojan, it was deafeningly clear that it was a Modi show all the way. Even the fact that, ultimately, a Supreme Court verdict had made the event possible, was relegated to the background. The man on the street seemed to be attributing the credit for the Ram temple to just one man – “Prime Minister Narendra Modi”.

Indeed, as far as the messaging was concerned, nothing was left to chance. Some of the key BJP leaders who had spearheaded the temple movement in its early days – and are now facing trial in the Babri Masjid demolition case – were not extended invitations for the ceremony.

On the face of it, the invitations had been issued by the new 15-member Trust – after all, the prime minister also  said, “I am grateful to the Trust for inviting me here” – but the Trust itself, which has also been entrusted with the task of temple construction, was constituted by the Union government!

Moreover, none other than Nripendra Misra, former IAS officer who was PM Modi’s most-trusted bureaucrat as his principal secretary, is the Trust’s chief executive. How the guest list must have been drawn up is fairly obvious.

It may be convenient to cite the pandemic as a valid enough reason to keep the “oldies” at a “safe” distance. But there are many within the party fold who are wondering if it may not have been more appropriate to extend an invitation to former party stalwarts like Lal Krishna Advani, Murli Manohar Joshi or Kalyan Singh and left it to them to decide.

Other than UP chief minister Yogi Adityanath, it was the RSS chief, Mohan Bhagwat, who was accorded some significance. He not only addressed the gathering but also went to the extent of prompting the priest to speed up the proceedings.

That was not all. No religious leader from Ayodhya was included among the nine priests who carried out the puja, led by Acharya Gangadhar Pathak. He was handpicked by the organisers from Vrindavan, where he is not counted among the important religious leaders. 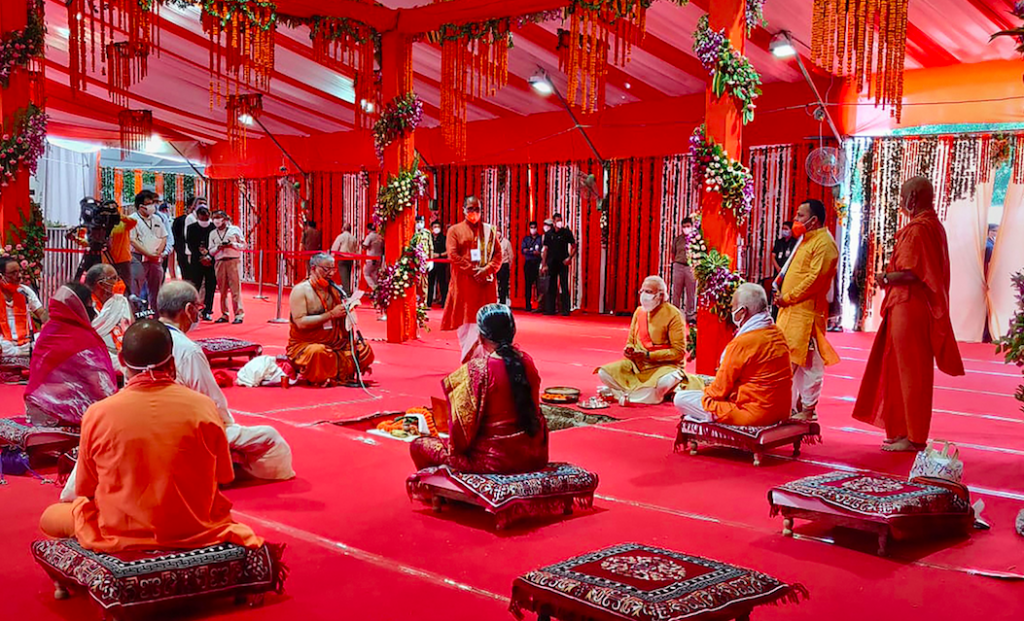 While Acharya Pathak and three others were seated near the place where the ritual was being conducted, four priests stood around as chaperons to assist in the ritual. Acharya Govind Dev Giri, from Pune, who is the treasurer of the Trust, was seated there throughout the ritual.

Many wondered why a lesser known priest from a Vishwa Hindu Parishad (VHP) sponsored ashram like the Keshav Dham in Vrindavan was asked to carry out the puja at the high-profile event. As the event progressed, the mystery was solved. What was interesting – and clearly visible – was the fact that he was carrying a written script to conduct the 35-minute ritual! The benefit of having a relatively unknown priest lead the puja were evident, for he spent more time singing paeans to the prime minister than on the ritual.

Also read: Advani, Joshi Not in Ayodhya List But Others Indicted for Babri Demolition Will Be There

The event, which was essentially political in nature and its signalling, has left the community of religious leaders smarting. The fact that the façade of ‘religiosity’ seemed to have slipped, seems to be bothering them.

Even before the ceremony, Shankaracharya Swami Swaroopanand Saraswati had objected to the timing of the ritual, saying it was “inauspicious”. After the event, priests have been raising questions about the manner in which the ritual was carried out. A leading Hindu priest from Ayodhya said, on the condition of anonymity, that the ceremony was not in tune with the procedures laid down in the scriptures – “there was no havan, no ahuti (offering).

Another leading priest from a shrine in Vrindavan said, “No puja is complete without avahan (invoking the gods), sankalp (making a resolve) in the beginning and prasad at the conclusion.”

Those who were sidelined during the ceremony will continue to make disgruntled noises about the way the bhoomi poojan ceremony was conducted, be it the lack of invitations extended to many a party stalwart or not following the prescribed procedures of ritual. What became crystal clear on August 5 was the culmination of a trajectory that had always been political.