So far, many Hindus have gone along with BJP’s cultural-political shibboleths, believing the Hindutva project to be a gentle affair. But the party may find itself abandoned when the Hindu community realizes this project will inevitably push India into civil war. On Thursday morning, my neighbourhood halwai – a most accurate psephologist and a highly perceptive political sociologist – told me, unaggressively yet unapologetically, that even though he did not bang a thali or do any kirtan on August 5, he had indeed lit two diyas and placed them under a peepal tree. He added that as per the cultural tradition, he had marked the occasion of the Ayodhya temple’s bhoomi pujan by preparing some mithai, though not in as large a quantity as he would have liked – a gentle allusion to his reduced circumstances in the era of Narendra Modi. When asked how he foresaw the shape of the newly pronounced Ram Rajya, his wish list was limited to two items: the local police should stop harassing small businessmen like him, and those at the very top should stop taking bribes and hoarding black money.

This self-confessed Modi acolyte’s cheerful realism was in sharp contrast to the mood of gloom and despondency among sensible Hindus and sensitive citizens after the elaborate tableau staged in Ayodhya. Perhaps my neighbourhood halwai knows – like millions of Hindus have known century after century – that in this unhappy land, all kingly pretenders have always invoked Lord Rama for their unholy, selfish purposes. Perhaps my neighbourhood halwai does know, as does any average Hindu, that the prime minister, too, was performing a very familiar trick – and not a particularly elevating sleight of hand at that.

The despondency among liberals was keenly pronounced not because the Sangh parivar was having its moment under the Klieg lights but because they understood the stark confusion among the defenders of the secular faith. Most felt betrayed and hurt at being let down by Priyanaka Gandhi Vadra’s borrowed disquisition on the inclusive virtues of Lord Rama. Nor could the secular camp have failed to note that suddenly the Congress’s social media warriors were going to considerable length to remind us that it was indeed Rajiv Gandhi who had performed the shilanayas, way back in 1989. It is the stench of such tawdry electoral calculations that assails the nostrils of liberals.

And, now that the bhoomi pujan has taken place, a temple will also come up. A ‘grand’ – may be the ‘grandest’ – temple will surely be made; but, it will be only one more temple in a land blissfully dotted with millions of temples, small and large. The mandir wahin banayenge crowd still has the triumphal satisfaction of having had its way – first in desecrating and demolishing a mosque, and then eventually bamboozling the judiciary into granting the apex court’s imprimatur on an act of political vandalism – but the prosaic reality is that life in and around India remains unchanged.

If you don’t believe me, just take a look.

On the day after August 5, the Peoples’ Liberation Army remains immovably ensconced miles inside Indian territory; the COVID-19 pandemic remains untamed in large parts of the country with the all-powerful home minister of India, Sardar Patel the Third, quarantined in an isolation ward; the economy remains impervious to the finance minister’s incantations; and our neighbours remain unimpressed and uncharmed by our rulers’ delusions of grandeur. In short, all our strategic conundrums remain unchanged despite the prime minister demonstrating what a great katha-vaachak, or storyteller, he is.

Above all, India is still formally a secular state; it has not yet been transformed into a Hindu state. The constitution of India remains the only source of lawful governing authority. Today’s rulers may treat the law lightly; they may think that a parliamentary majority gives them the licence to dispose of its secular contents; the opposition may not be sufficiently strong or even keen enough to stop the ruling party in its tracks; it may also be that for some time to come, the constitution’s secular spirit may be deprived of vigorous and zealous protection from the apex court. Yet, the Hindutva crowd has not gathered the courage of its conviction nor the clarity of its assertive claims to demand that this constitution be junked because it is a secular document.

And, that is the trickiest part of the Hindutva razzmatazz. Apart from demanding that the “appeasement” of Muslims must end, the BJP and its ideologues have not yet told the Hindus what they want done with India’s largest minority. So far, a considerable part of the Hindu community has gone along with the BJP’s cultural slogans and political shibboleths because it has been led to believe that the Hindutva project is a gentle and agreeable affair. So far, ordinary Hindus have been misled into believing that all the BJP is asking for is that the Hindu community not be denied its place under the sun and that its sensibilities be appropriately respected and acknowledged. If these sensibilities get sated simply because the prime minister prostrates himself at Hanuman Garhi, then praise the lord. Mobilising and marshalling the Hindus for electoral purposes as a vote bank is passé, commonplace politics. 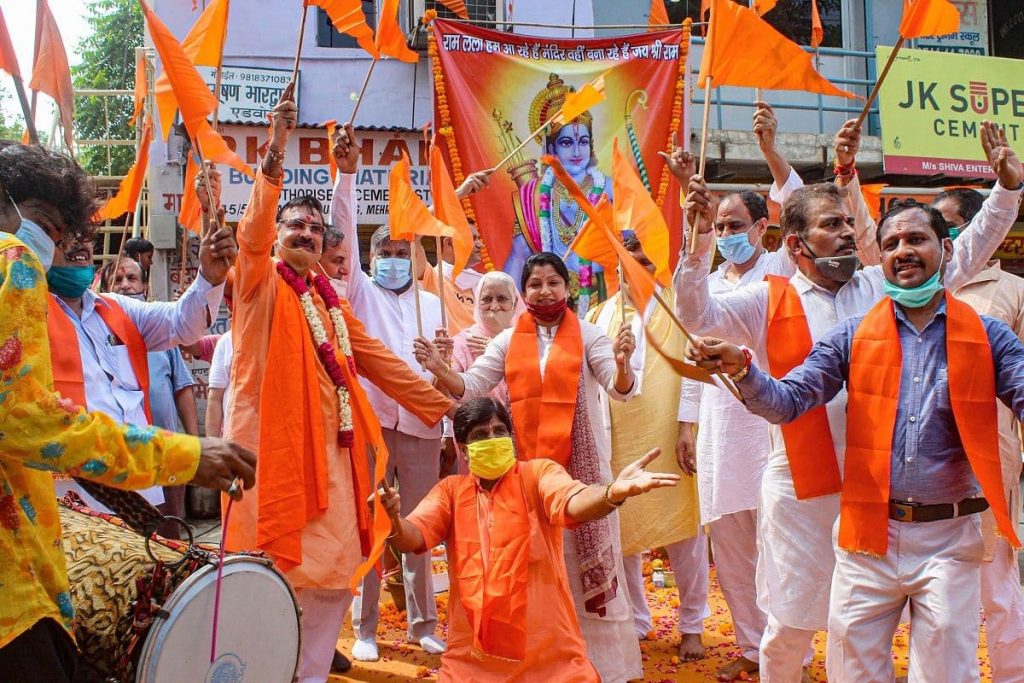 However, the BJP may find itself abandoned the moment the Hindu community realises that the Hindutva project will inevitably push India into an intractable civil war that will be bloody and brutal and have disastrous consequences. It will bring forth a heavy authoritarian hand. New enemies will have to be invented every week; and, new experiments in coercion will inevitably have to be conducted. The Hindus, then, will also be among the losers in the BJP’s state of Ram Rajya.

If the Hindutva conceit goes beyond some political leaders’ quest for electoral power in pursuit of megalomaniac designs, it will have to find ways to deal violently with the minorities. It will have to go ‘vocal for local’ in finding a substitute for the Final Solution. That will not be an invitation to civilisational greatness but to an unmitigated, un-Hindu like degradation. That has always been the dilemma for the BJP and Sangh parivar. And that dilemma has become crystallised in all its ugly potentialities on August 5.