At Sangam, Pilgrims and Boatmen Claim Surge in Modi Wave

If the boatmen are to be believed, Modi is likely to win the current election with an even bigger majority for his National Democratic Alliance (NDA) than in 2014. 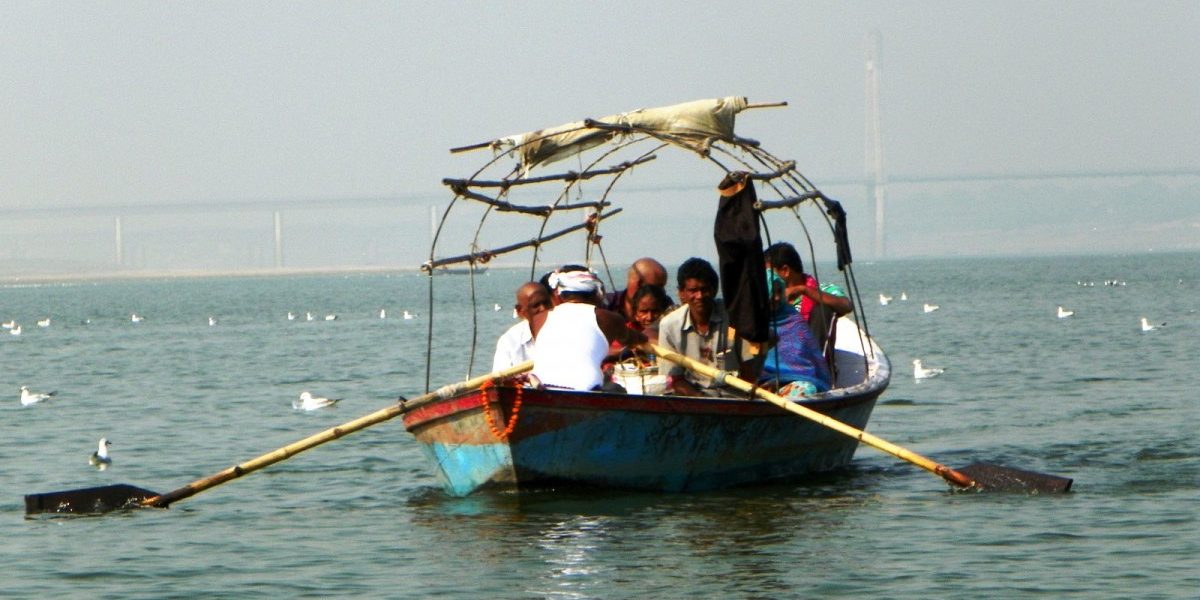 Pilgrims at the Sangam in Allahabad. Credit: juggadery/Flickr CC-BY-SA 2.0

Allahabad: Everyday, thousands of yatris (pilgrims) of every caste and class arrive from all over the country to take a dip at the sacred Sangam, the exact site where the holy waters of the Ganga and Yamuna mingle near this city, now officially called Prayagraj. They are rowed to the Sangam by the traditional boatmen known as mallahs.

I have been visiting the Sangam as a political pilgrim since 1977, when after much coaxing, the boatmen had told me that Indira Gandhi would lose the election and the Janata party would come to power. I am now covering an election from the Sangam for the eighth time through conversations with the pilgrims and the boatmen who quietly listen to the opinions of the yatris as they row them to the Sangam.

Astonishingly, the election forecasts made by the boatmen and pilgrims over decades have proved to be relatively more accurate than the election predictions of the professional pollsters and political pundits. For instance in the 2004 election, when everyone was predicting a victory for the “India Shining” BJP, the boatmen had suggested that the Congress could form the government.Their forecast were reported by me in The Hindustan Times of May 1, 2004 but unfortunately there is no online link. In 2014, the boatmen and pilgrims had predicted a clear victory for the BJP.

This time, while sitting with a group of boatmen on a rough wooden platform embedded in the sand bank of the rivers, they tell me that nearly all the yatris are for Modi. One boatman points out that if anyone makes a positive remark about the Congress, “yatri unsey ladh jatey hain”  (the pilgrims start a fight with the Congress supporter). Why are so many yatris backing Modi? The boatmen say that the key word they often hear in reference to Modi is “vishwas” (trust). The yatris rarely mention the BJP or its electoral candidates. If the boatmen are to be believed, Modi is likely to win the current election with an even bigger majority for his National Democratic Alliance (NDA) than in 2014.

As the sun is setting, I hire a boat rowed by Chandan Nishad (Nishad is the caste surname used by all the boatmen) to transport me across to other boats loaded with families and clans of pilgrims, so that I can test what I have just heard from the boatmen. We intercept a number of boatloads on their way to and from the Sangam and ask them who they have already voted for or will be voting for in the seven-phase election.

Two boatloads from Guna and Sagar in Madhya Pradesh have voted for Modi. The Guna group speaks through Babloo Sahu, 30, a labourer. The Sagar spokesman is Roop Narayan Rai, 50, an agriculturist. A third boatload from Narsinghpur, also in Madhya Pradesh, is headed by Nitin Dubey, 32, a technician with Bharat Heavy Electricals. Dubey says they have cast their vote for Modi. A boat with pilgrims from Sitamarhi in Bihar passes by. They are BJP supporters.

Chandan Nishad rows me towards a boat carrying yatris from Lucknow. Their group leader, Dinesh Chandra Gupta, 66, a businessman, says that they all favour Modi. A young man who has come alone from Moradabad, Uttar Pradesh, also backs Modi. We encounter a boat carrying two elderly Gujarati gentlemen from Ahmedabad. Both Yogeshbhai Pandya a doctor, and V.S. Panchal, a retired teacher, vociferously proclaim “Modi zindabad!”

As it is getting dark, we approach the sandy shore and find some young people from Prayagraj paddling with their feet in the water. One of them, Pushpa Singh, 29, works as a sales assistant in a city mall. She will be voting for Modi as will her companions. Why? Pushpa confidently declares, “Modi ney bahut vikas kiya” (Modi has done a lot of development).

I complain to Chandan that I have not met any persons from the South of the country. He advises me to come again early in the morning when busloads from the South arrive to visit the Sangam.

I duly arrive at the vast sandbank next morning to find several large coaches parked there. They have travelled great distances to get to the holy site. I meander from coach to coach. Srinivasa Gupta, 38, a bus owner from East Godavari in Andhra Pradesh, says that his vehicle is carrying 40 passengers on a 14-day odyssey visiting many holy towns. Gupta believes that the YSR Congress Party led by Y.S. Jaganmohan Reddy will do well in Andhra Pradesh as it is a fresh new force. Chandrababu Naidu and his Telugu Desam are likely to loose seats in the state’s Vidhan Sabha and also in the Lok Sabha. Elections for both the legislatures are being held simultaneously in Andhra Pradesh. In another bus, Surya Rao, 68, a transport inspector from Vishakhapatnam, Andhra Pradesh, has voted for the YSR Congress party.

I move to a bus which has arrived from Bengaluru. Ram Gowda, 65, a retired government officer, has voted for the BJP. Three others from Bengaluru in the same bus, quickly confront Ram Gowda and say that they have all voted for the Congress. They are Venkat Gowda, 63, a retired bus conductor, Srinivas, 65, a retired steel company employee, and Mariaswamy, 54, a businessman. The consensus is that the Congress-JDS alliance and the BJP will each win 14 seats of the total of 28 Lok Sabha seats from Karnataka.

Parked next to the bus from Bengaluru, is a shiny bus from Hyderabad. As I stand at the door of the bus, I am constantly brushed aside by women from Telangana carrying large plastic cans of Ganga water into the bus. I manage to talk to Tirumalesh, 43, a businessman from Hyderabad. He is confident that the Telangana Rashtra Samithi led by Chandrashekhara Rao will win at least 10 of the 17 Lok Sabha seats from his state. Finally, I meet S. Raju, 43, a shopkeeper from Thiruvallur district in Tamil Nadu. He has voted for an independent candidate and has no idea which party will win in his state.

In the evening, I visit Bhagwatpur and Barwah, two villages near Bamrauli airfield on the outskirts of Prayagraj. In Bhagwatpur, I turn up yet again at the dingy, dark mud hut of feisty Raj Rani, 60, the dhoban (washerwoman), whose family abode I have previously visited during the 2004, 2009, 2014 Lok Sabha elections and the 2017 Uttar Pradesh Vidhan Sabha election. In 2017, she voted for panja (the Congress hand symbol), but this time she will vote for kamal ka phool of the BJP. (Strangely, Raj Rani has very recently changed her name to Phoolmati.) Her eldest son, Sharda Prasad, 30, is an angry man who works as a labourer. He despises all parties but will vote for Modi as he has developed village roads and has given his mother’s hut an electricity connection.

Prasad informs me that their hut will soon be demolished to widen the road outside it. Does that not concern you? He promptly answers that Modi will provide an alternative house for them. How is he so sure? “Mera Modi par pura vishwas hai” (I fully trust Modi). Prasad says that nobody knows Yogi (the UP Chief Minister) but everybody knows about the good works of Modi.

Bhagwatpur’s caste composition is about 70% Dalit, which includes the dhobis, and 30% Brahmin. About 100 metres down the road from Prasad’s dwelling, I meet Abhishek Dubey, 21, the Brahmin owner of a  paan shop, which is doing brisk business. Like Prasad, Dubey fully supports Modi. He claims that Modi developed the road that provides access to many more vehicles than before. Many of these cars and trucks stop at Dubey’s paan shop.

As night descends, I move to neighbouring Barwah, an unusual village with an almost 100% Brahmin population. Through the maze of ill-lit lanes, I arrive unannounced at the small house of Prem Narayan Tiwari, 74, a jolly, retired food inspector who I am visiting for the fifth time during an election. He welcomes me very warmly and chides me for not coming earlier. He says that traditionally the great majority of voters here have voted for the BJP and will do so again, despite the BJP having not done anything for this village. He admits that the Modi government has built many new roads and a new air terminal at the nearby Bamrauli airfield. He does not mention Yogi or his government.

The following morning, I visit the Muslim locality of Noorullah Road in the centre of Prayagraj. In the stifling heat, the Hussain brothers sell cooling blocks of ice at their tiny stall. Again, I am visiting them for the fifth time during an election.  They inform me that the Muslims in the area will be voting for the Samajwadi candidate which is part of the Mahagathbandhan alliance`in UP. All three – Noorullah Road, Bhagwatpur and Barwah form part of the Phulpur Lok Sabha constituency which is a twin of the Allahabad constituency.

Caveat: The results from the 80 Lok Sabha seats in Uttar Pradesh will be crucial in deciding the national electoral outcome. There is great uncertainty about how UP will vote.

(After reporting the views of the boatmen and pilgrims, I venture now to offer my personal opinion. If the hysterical and aggressive personality cult howling for Modi that seems to be apparent in most regions of the country – except perhaps in the southern states of Andhra Pradesh, Kerala, Telangana and Tamil Nadu – annoints him as prime minister with an enhanced majority, the country is heading for a rough ride with so much power in the hands of one forceful figure.)

Jawid Laiq is a political correspondent who has been covering elections since 1977 and is the author of The Maverick Republic. He is solely responsible for this report.