At Nandigram, Site of Historic Land Movement, a Battle to See Who the 'Real' Brahmin Is

With Mamata Banerjee and Suvendu Adhikari have attempted repeatedly to cement their 'upper' caste credo, the history of the movement that made Nandigram is long forgotten.

Kolkata: On March 9, a day before submitting her nomination papers for the Nandigram assembly constituency, chief minister Mamata Banerjee addressed a workers’ gathering with local organisers.

While cautioning her party’s workers to stay alert of BJP’s efforts to divide people in the name of religion, she said, “Some people will try to create divisions by talking of 70-30. Tell them we are 100. I, too, have a surname. But should I ponder as to why I, Mamata Banerjee, am a daughter of a Brahmin family…Brahmin, Scheduled Caste, Muslim…these identities should not matter.”

She then asked her unnamed opponents to prove they were good Hindus. “I am a daughter of a Hindu family. Don’t try to play the Hindu card with me. First you clarify if you are a good Hindu. Hinduism means loving people. Swami Vivekananda taught us Hinduism,” she said, and went on to chant a series of mantras.

After the rally and over the next day, until she suffered an injury on the evening of March 10 that forced her to return to Kolkata, she visited 19 temples and a mazhar, offering prayers. 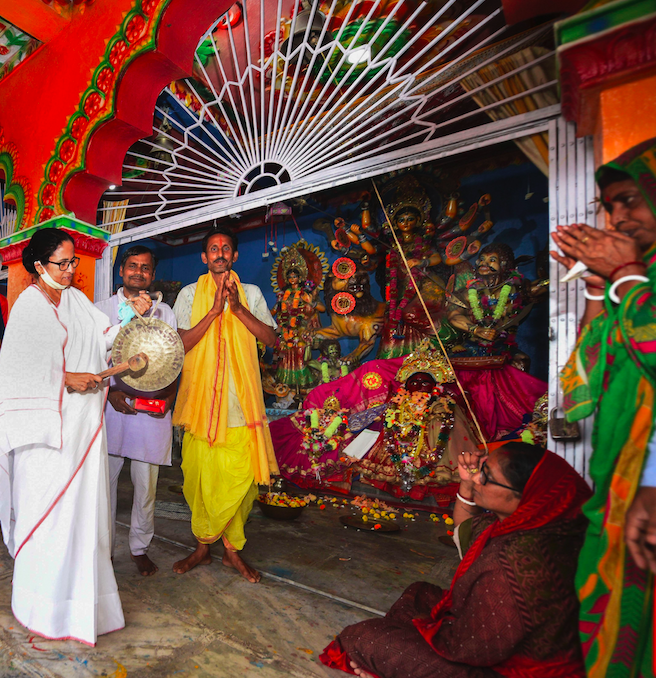 Incidentally, Suvendu Adhikari, once Mamata Banerjee’s pointsman for Nandigram and now the BJP’s candidate against her, has been highlighting his Brahmin identity since 2020. On March 10, a day after the chief minister’s speech, Adhikari said while addressing a gathering at a temple, “I am a Brahmin’s son. I do the chandipath every day.”

The chandipath comprises a set of chants in Hindu worship.

While two of the principal contenders for this seat have been trying to flaunt their Brahmin credentials, the third important candidate, Minakshi Mukherjee of the Left-Congress-Indian Secular Front alliance is also from a Brahmin family. Mukherjee has not mentioned her religion or caste while campaigning yet. She is a leader of the CPI(M)’s youth wing, Democratic Youth Federation of India.

Suvendu Adhikari, meanwhile, has been boasting of his Hindu and Brahmin identity for nearly a year now. When Mamata Banerjee first announced her plan to contest from Nandigram, while addressing a public rally in Nandigram in January, one of Adhikari’s first public responses centred around the fact that she was choosing Nandigram over her mainstay constituency of Bhawanipur as she could depend on “62,000 votes.” The figure makes for an obvious reference to the number of Muslim voters in the constituency.

The BJP, too, carried out a campaign at the state level saying that Banerjee chose Nandigram because of the sizeable Muslim population in the region. The party’s state unit president Dilip Ghosh claimed in a social media post that 34% of Nandigram’s voters were Muslims and that was why Mamata Banerjee wanted to shift her constituency from the Hindu (and non-Bengali)-dominated Bhawanipur in Kolkata.

Nandigram in East Midnapore district is about 130 km from Banerjee’s residence in Kolkata.

BJP’s campaign cited factually incorrect figures. Demographically, general caste Hindus dominate the Nandigram constituency, which is made of the Nandigram 1 and Nandigram 2 community development blocks. According to the Census of 2011, Nandigram assembly segment had a total population of 331,054, of whom 244,867 (73.96%) were Hindus and 25.88% were Muslims. Scheduled Castes made up 16.46% of the population.

The BJP seems to have planned to carry out a high-voltage campaign on the line of Hindutva in Nandigram. Union minister Smriti Irani accompanied Adhikari on Friday, March 12, while he filed his nomination. Adhikari had also sought, and has got, a rally by Uttar Pradesh chief minister Adityanath. Several other national-level leaders of the BJP are scheduled to campaign for him.

Nandigram is slated to go to polls in the second phase on April 1. Sk Supiyan, who was one of the leaders of the famed anti-displacement movement of 2007-08 that Mamata Banerjee led, is acting as Banerjee’s chief election agent.

According to a senior BJP leader, the Left-Congress alliance putting up a Hindu candidate has complicated matters for them.

During 2007-08, Nandigram stood witness to Hindu and Muslim agitators together participating in religious events and prayers. Nandigram had brought up debates around development, displacement and human rights. Together with the movements in Singur in West Bengal’s Hooghly district and Kalinganagar in Odisha, the anti-displacement movement in Nandigram played a significant role behind the scrapping of the Land Acquisition Act of 1894 in 2013.

Now, with Banerjee having visited more than a dozen temples, and Adhikari visiting almost all the temples that she visited, and the two highlighting their ‘upper’ caste identities, the poll issue seems to have strayed far.