UP Assembly Polls: There Is Both Clarity and Confusion About Voter Choices

Conversations with a cross-section of people in UP – the key state for the continuation of Modi as the prime minister – has led to some clarity and some uncertainty about the overall atmosphere. 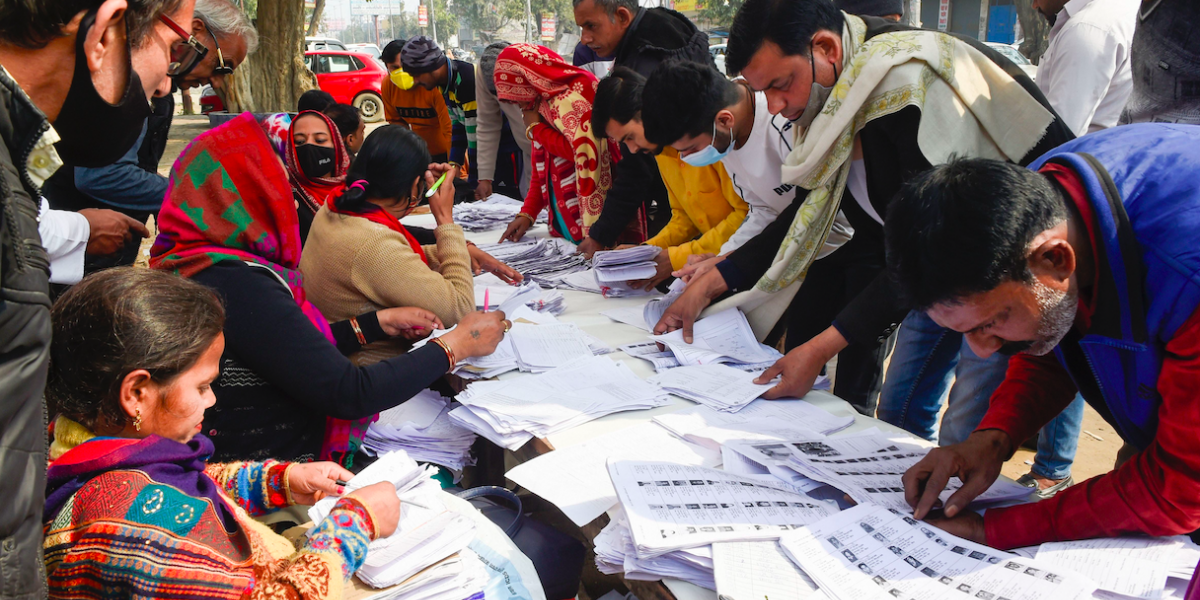 People check their names in the voters' list at a polling station, during the first phase of UP Assembly elections, in Dadri, Thursday, Feb. 10, 2022. Photo: PTI

Bareilly: A fair amount of clarity is emerging as the elections travel beyond the initial phases, particularly in the context of western Uttar Pradesh:

A drive through the hinterlands of Aligarh, Iglas, Badayu, Bareilly, Meerganj, Aonla and Bithari Chainpur and conversations with a cross-section of people lead to an understanding that it’s naïve to believe there is a Thakur-Brahmin divide in the Hindi heartland. The Brahmins are as solidly behind what the locals refer to as the ‘Modi-Yogi wave’ as the Thakurs – the caste of chief minister Yogi Adityanath. The urban Banias and the Kayasthas too are supporting the saffron party.

“You are educated. You must have seen how a Muslim girl student wearing hijab was shouting ‘Allahu Akbar’ in a Karnataka college. The BJP is the party of Hindus. We have to vote for the BJP to protect our dharma (religion) against Muslims, who are increasing in number and working to turn India into an Islamic state,” Ram Niwas Sharma, an elderly Brahmin at Agras village in Meerganj assembly constituency of the Rohilkhand region, said.

On pointing out that Adityanath also wears a religious symbol in his office – an saffron coloured lungi and a collarless kurta meant to be worn by a temple priest – Sharma became uneasy. “We shouldn’t question the attire of Maharajji [Adityanath] who symbolises our dharma. But a student should follow the dress code,” he argued.

Watch | ‘Inflation, Unemployment Not a Concern’: What Voters of Rampur Want

A common cause to fight against Adityanath

After becoming chief minister, Adityanath’s politics have revolved around fuelling hostility towards Muslims, in the form of his anti-Muslim speeches and laws.

Adityanath’s actions are quite similar to what Narendra Modi did when he was chief minister of Gujarat. Modi had ignored the Vishwa Hindu Parishad and Bajrang Dal rioters, who perpetrated mayhem on Muslims in Ahmedabad and Gandhi Nagar after the 2002 riots. Adityanath banned the sale and consumption of meat in 22 Muslim-Dalit inhabited localities of Mathura, inflicting a blow on their livelihood, just like Modi was reported to have doled out inadequate compensation for the Muslim riot victims who were unable to start afresh and were languishing in relief camps.

Under Adityanath, sedition cases were allegedly framed against Muslims for opposing the Citizenship (Amendment) Act and the National Register of Citizens. The chief minister also attacked the Taj Mahal saying it is not “Indian enough” and changed the names of the cities that had Mughal connections as a part of his assault on anything Islamic. Muslims have suffered like never before with no support from their Hindu brethren under Adityanath’s rule.

However, two developments brought about a significant change in the scenario. First, the year-long farmers’ movement against the three contentious farm laws (now withdrawn) angered the farmers synonymous with the Jats in Muzaffarnagar-Shamli region and turned them against the Modi-Yogi dispensation.

Secondly, Adityanath fiddled with the job quota norm, employing 65,000 candidates through Uttar Pradesh Public Service Commission – mostly from the savarna castes. The backward caste leaders revolted against him on the issue and youngsters – already battling unprecedented unemployment in Uttar Pradesh – were up in arms against him.

In a way, the Jats, the young people and the upwardly mobile OBCs share a common cause with the embattled Muslims to get rid of Adityanath. With Adityanath’s share of opponents swelling at the ground level, the savarna Hindus – by far the beneficiaries of the regime – were gripped by the fear of the Samajwadi Party replacing the “favourable” regime for them and got behind the BJP.

The Brahmins have evidence of Adityanath favouring them: Azam Khan and many other Muslim leaders are languishing in jail whereas Ajay Mishra ‘Teni’ – a history-sheeter from the Brahmin community – retains his position as the Union minister of state for home and his son –accused of mowing down four farmers at Lakhimpur Kheri – was granted bail by the high court.

Responding to savarna consolidation, Muslims too have turned tactical. The Bahujan Samaj Party, the Congress and Asaduddin Owaisi’s AIMIM have fielded Muslim candidates – threatening the prospects of the SP-RLD combine. But it has become increasingly clear that Mayawati has been confined to her Jatav vote-base and as such, she is not in a position to defeat the BJP. The condition is the same for the Congress and the AIMIM as they lack a larger political base. In such a situation, the Muslims have by and large joined the Jats, the young people and a large section of the OBCs in favour of the SP-RLD combine.

It is crucial for the BJP to retain Uttar Pradesh if it wants to win the next general elections, Therefor, it has continuously tried to communalise the atmosphere.

Meanwhile, the Adityanath government has created a huge band of beneficiaries, particularly among the non-Yadav lower OBCs and non-Jatav Dalits. It is estimated to have spent Rs 3.50 lakh crore for distributing five kilograms of food grains twice a month and 1 kg packets of ghee, salt and black gram to families below the poverty line. Apart from that, it has also provided Rs 500 to elderly individuals as old-age pension.

The BJP leaders are confident that these sections, which are in sizable numbers across Uttar Pradesh, might help the BJP electorally. However, these sections have kept the political pundits guessing by not revealing their cards.