The 'parivartan' wave worked against the party, along with the fact that poor grassroots administration and increasing farm prices upset voters.

Raipur: It has been a massive mandate in favour of the Congress in Chhattisgarh, more than it had ever achieved in any of the previous elections, including under the united Madhya Pradesh. Thus Congress may reasonably claim that there was a wave in its favour, while it may be closer to the truth that it benefitted the most from a ‘parivartan‘ (change) wave. After 15 years, it is equally reasonable to believe that the BJP suffered from voter fatigue rather than a clear anti-incumbency factor.

But if any two reasons can be pinpointed for the BJP’s defeat, they are: poor grassroots administration and poor MSP rates.

Because of poor grassroots administration, lower level revenue officials have run amok with land records. Forest officials have destroyed forests and every other person in charge of loan, rice, mandi schemes has only looted the treasury. The BJP’s tendency to capture every ration shop, rice milling scheme and government contract for roads, canals, bridges to supply in tandem with government officials also caused the parivartan lehar.

The price rise coupled with extremely poor MSP rates for farm produce caused irreparable damage to the BJP’s prospects and put paid to all its efforts in developing a good road and electricity network for the state. Despite the negative feedback at the start of the elections, the party refused to change its candidates. As many as 36 MLAs and 13 out of the 14 ministers were retained, creating an impression of arrogance.

The result is that the BJP has lost in all the five major regions where voting patterns can be gauged: Bastar with 12 seats, Sarguja with 14 seats, Durg zone with 20, Raipur zone with 20 seats and Bilaspur with 24. The Bilaspur, Durg and Raipur zones are generally referred to as the plains. Here the BJP had held 38 out of 54 seats, leading in each zone with 12, 11 and 15 respectively. It got four in Bastar and seven in Sarguja.

That equation has undergone a significant change now. Congress has swept Bastar with 12 out of 12 and won 10 out of 14 in Sarguja. In the plains, it has usurped the BJP, winning 40 of the 54. The figures might change, but the Congress is unlikely now to get less than 64 seats.

It appears the Left may have put all its might behind anyone who could beat the BJP and in this case, the beneficiary has been the Congress. The very high percentage of voting in Bastar (84%) indicates that the LWE put its might behind defeating the BJP rather than making Congress win.

The surprise of course has been the performance of the Jogi Congress, which may end up winning more than five seats. It will pinch the BJP more than the Congress. Senior Congressmen had always been maintaining that Jogi was the main reason behind its losses in 2008 and 2013, as he is believed to have sabotaged the party from within. 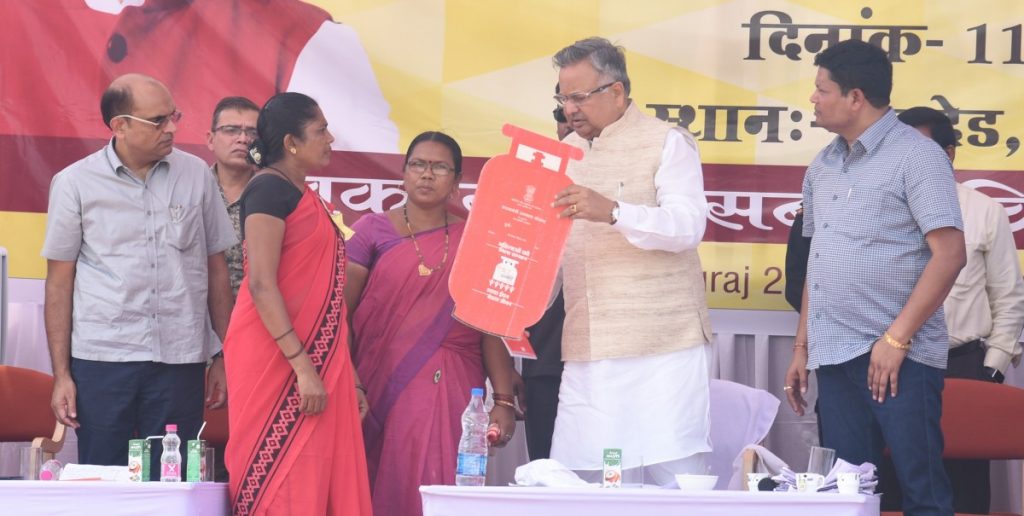 Chhattisgarh chief minister Raman Singh is known as Chaur Baba, or Rice Santa, for distributing salt, rice and pulses to voters before election.

This time, the wheel has come a full circle and the JCC has actually managed to damage the BJP more than it did the Congress. The final results will show that the BJP, which laid claim to the SC vote in 2013, winning nine of the ten SC-reserved seats and disrupting the Dalit vote bank of the Congress, has now been disrupted by the BSP-JCC combine. The Dalits have shown great solidarity with the Jogis and the rest have gone with either the Congress or the BSP.

The main factor behind the Congress’s massive win, however, is that there has been a 10% (estimated) swing in its favour. It had lost by a margin of 10 seat in 2013, with a vote share difference of less than 1%. The same swing away from the BJP is also visible in Rajasthan and MP. The BJP had led the Congress by 9% and 12% respectively in MP and Rajasthan. For the Congress to cover that gap and add some more votes has proved far more difficult in those two states.

At any rate, what the results in Chhattisgarh have proved is that the Congress has retained its base, despite being out of power for 15 years, just like it does in Punjab and Gujarat. It hovers around 40% of the total votes in all three states.

It also proves that the BJP has been unsuccessful in bringing drastic change in people’s attitude towards its mixed policies, despite so many years of continuous rule. It has still not managed to take all sections of the population with it. If there is a lesson for it for the 2019 general elections, it is this: continued divisive agenda may succeed a short time, but does not produce long term change.