The Congress – which staged a protest on Thursday wearing PPE kits – demanded the immediate intervention of Prime Minister Narendra Modi into the business dealings of Himanta Biswa Sarma's family. Guwahati: The investigation by The Wire and The Cross Current into Assam chief minister Himanta Biswa Sarma’s wife Riniki Bhuyan Sarma’s firm bagging an ‘urgent’ supply order for personal protective equipment (PPE) kits while he was the health minister has sparked a political row in the state, with the opposition demanding a probe by Central agencies into the alleged irregularities.

The Congress – which staged a protest on Thursday wearing PPE kits – demanded the immediate intervention of Prime Minister Narendra Modi. Leaders said if the prime minister really believes in zero tolerance towards corruption, he must order an impartial probe by the Central Bureau of Investigation (CBI) or the Enforcement Directorate (ED) against all alleged irregularities committed by Sarma and his family.

Also Read: Before Lockdown, Assam Govt Gave ‘Urgent’ PPE Orders to Firms Linked to CM. Here’s How They Turned Out

Bhupen Bora, the Assam Pradesh Congress Committee president, said the investigation by the two media organisations showed that the rules were flouted while awarding contracts to firms owned by Sarma’s wife and business associates of the family for supplying PPE kits and other COVID-19 pandemic related procurement orders when Sarma was in charge of Assam’s health ministry.

Calling it a scam, Borah added that the firm owned by Sarma’s wife, JCB Industries, was awarded supply orders at 65% higher rates than the market prices. Borah further said that the Congress will continue its protest by wearing PPE kits until an investigation by the CBI or the ED is ordered.

The Congress’s leader of opposition in the state, Debabrat Saikia, also slammed Sarma for favouring his wife in government deals. He said Sarma has clearly violated the Representation of People’s Act, 1951 and the Code of Conduct for Ministers, in which a guideline prohibits any public representative from favoring their relatives or family members in the department they are in-charge as a minister or chief minister. 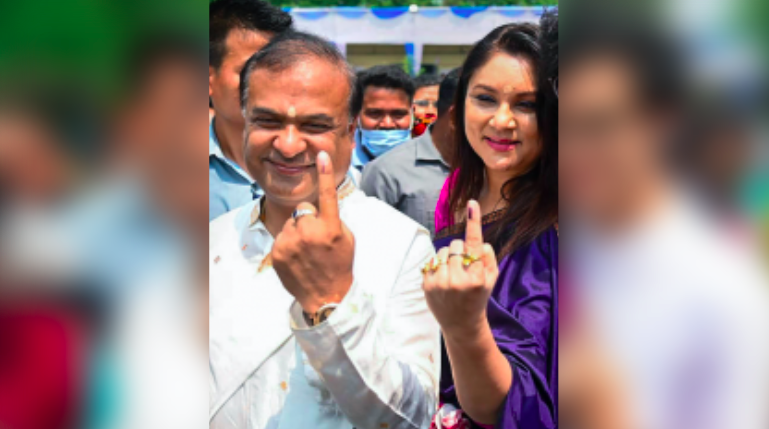 Separately, addressing a press conference, Assam Jatiya Parishad’s president Lurinjyoti Gogoi said Sarma’s wife and his close business associates became richer at a time when the entire world was suffering the consequences of a pandemic.

Stating that there is a need for a high-level enquiry into the procurement orders, Gogoi said they have sent a memorandum to the prime minister demanding an investigation by a central agency into the irregularities in the supply of COVID-19 items in Assam.

Referring to The Wire and The Cross Current’s previous investigation into Riniki Bhuyan Sarma’s firm RBS Realtors’ involvement in shady land dealings, Aam Aadmi Party’s Assam state convenor Dr Bhaben Choudhury said even though many alleged scams related to the CM’s family have come to light, the latter has not taken any steps to prove himself not guilty. AAP has sought a judicial probe into all transactions between the firm owned by Sarma’s wife and the Assam government, Choudhury added.

Also Read: Before Lockdown, Assam Govt Gave ‘Urgent’ PPE Orders to Firms Linked to CM. Here’s How They Turned Out

Sarma and his wife deny irregularities; call it a donation

Meanwhile, addressing the media, CM Sarma tried to downplay the whole issue, saying the PPE kit supply by his wife’s firm was a “donation.”

“At that time (March 2020) when there was not a single PPE kit available in the hospitals in the state,  these PPE kits were donated without taking a single penny…At that time, not a single Congress leader had donated anything, even Plasma…Now how can there be a controversy over someone’s donation?” Sarma told reporters.

Notably, Sarma’s statement was in the same line as what his wife, Riniki Bhuyan Sarma, said in her statement on Wednesday. The Wire’s response to these claims can be read here.

Also Read: How the Bulk of Assam’s Sanitiser Orders Went to Firm Linked With CM at Much Higher Rate

However, Bhasco De Saikia, the executive president of the Raijor Dal, rubbished Sarma’s claim, saying Sarma’s wife’s firm donated 1,498 PPE kits under Corporate Social Responsibility (CSR) activities only after her firm failed to complete the supply order. Saikia also made public three letters sent by the NHM to different companies for their CSR activities and said in these cases, the rate of commodities is not mentioned. In the NHM’s letter to Riniki Bhuyan Sarma’s JCB Industries, the rate of the PPE kits was clearly mentioned.

“If this corruption is thoroughly investigated, then many new angles will come to light. That is why we demand a CBI probe into these cases,” he added.