On November 15, the Supreme Court is likely to decide the fate of 30 lakh applicants who have submitted only a panchayat residency certificate to prove their family lineage and claim Indian citizenship. 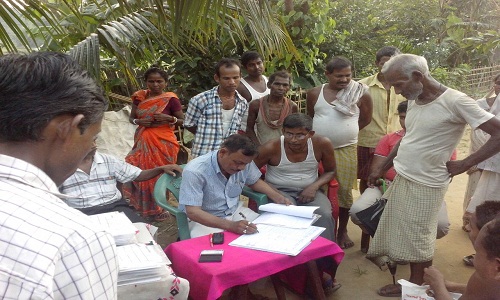 New Delhi: On December 31, the draft updated National Register of Citizens (NRC) for Assam is set to be ready.

With the date, set as per a Supreme Court order, merely a few weeks away, a huge amount of apprehension is seen surfacing in a section of people residing in the state, particularly among the Muslims of East Bengal origin. Their fear is that “genuine citizens may run the risk of losing their right to be in the draft NRC”.

This apprehension is primarily stemming from the Supreme Court’s August 24 directive to the state coordinator of the NRC, Prateek Hajela, to segregate the “original inhabitants” (OI) from among 48 lakh applicants who had submitted only a panchayat certificate as a ‘link document’ in their application forms to the NRC authorities to prove their Indian citizenship, and ready a “partial draft NRC” by December 31.

A ‘link document’ is a piece of documentary evidence that the NRC authorities sought to prove the applicant’s residency in the state through the lineage of his/her parents or grandparents before March 24, 1971 – the cut-off date set by the Assam Accord.

Signed in 1985 between the then central and state governments, and the All Assam Students Union (AASU) and Asom Jatiyotabadi Yuva Chatra Parishad (AJYCP), the Accord brought an end to six years of agitation against “illegal immigrants” entering the state from neighbouring Bangladesh.

The 1951 NRC list is being updated under the supervision of the Supreme Court to help detect undocumented immigrants from Bangladesh as per a 2005 tripartite meeting held between the AASU and the then state and central governments to implement the Accord.

Though in 2010 a state cabinet sub-committee said that residency certificates issued by a village panchayat secretary is a valid supporting document that a married female applicant could submit to the NRC authorities to prove her link to her paternal family, in a February 28 judgment, the Gauhati high court rejected this submission, stating it was “unconstitutional” as the document has “no legal sanctity”. The directive at once put the Indian citizenship of those applicants, most of whom were married women, under the lens.

A number of special leave petitions have been filed by applicants challenging the high court decision in the Supreme Court. During the course of hearing these petitions, the apex court had given the August 8 directive to the NRC coordinator.

Responding to the bench’s question, Hajela submitted to the Supreme Court in the next hearing – on October 12 – that 17.40 lakh of the total 48.09 lakh people who submitted the village panchayat document as their link document “are original inhabitants” of the state. In the August 24 submission, the project coordinator had told the Supreme Court that though only married women could submit the village panchayat certificate as a link document to establish their connection to their natal home, about 3.6 lakhs male claimants “who were not entitled to use the supportive document in question” had also submitted it.

On November 15, the Supreme Court is likely to decide the fate of the remaining 30 lakh applicants.

With questions being raised by minority organisations in the state (a petition on this was filed in the Supreme Court by the All Assam Minorities Union) and the opposition Congress (its petition was rejected by the Supreme Court) as to how the NRC authorities arrived at the OI status of applicants without set guidelines, Hajela held a press meet in Guwahati on November 1 to clarify that “no categorisation such as original inhabitant or otherwise will be made in the NRC”. His office thereafter issued leaflets “to remove misconceptions” about the ongoing exercise, and said that those whose names wouldn’t figure in the draft NRC would get a month’s time “for claim and objection”.

However, the apprehension thrives.

Also read: Transitory Citizenship and the Plight of the ‘Illegal’ Immigrant in Assam

“Though Hajela told the court that only 17.04 lakh of the 48.09 lakh applicants are original inhabitants, we want to know how did he segregate the OI from the non-OI, as there are no guidelines for it. We feel that the process is arbitrary as no definition or parameter has been fixed for the purpose by the NRC authorities, even though concerned persons have approached the NRC authorities several times in this regard after the SC directive,” said Abdul Batin Khandakar, president of the Brahmaputra Valley Civil Society, an organisation that helped applicants from the Bengali Muslim community fill up the NRC forms.

On September 7, the Coordination Committee of Minority Organisations, Assam, a composite body representing 23 state-based Muslim organisations including Khandakar’s outfit, submitted a memorandum to the NRC state coordinator urging him to issue a guideline “stating eligibility criteria for coverage under clause 3 of the schedule of the Citizenship Rule 2003 (Registration of Citizens and issue of National Identity Cards) to avoid ambiguity” and “in the interest of free, fair and uniform identification of original inhabitants throughout the state”.

Matiur Rahman, general secretary of Justice Forum, which is also a part of the Coordination Committee, added, “The SC has termed the tea tribes of Assam as original inhabitants under clause 3(3) of the 2003 Schedule of Citizenship Rules. We are happy about it and welcome it. However, if the criteria for calling them OI is because they were brought to the state by the British to work in the tea gardens of Assam, then we too should be called so because we too were brought to the state by the British.”

On October 10, both Khandakar and Rahman’s organisations also submitted a memorandum to the registrar general of India (RGI), urging him to formulate guidelines to segregate the original inhabitants as ordered by the Supreme Court.

Stating that the state coordinator has not yet formulated the guidelines “so that no foreigner can enter his/her name in updated NRC as ‘OI’ and also no original inhabitants are left out”, the memorandum requested the RGI to “take appropriate executive action and legal remedial measures to publish NRC draft at a time instead of publishing a partial draft”.

Speaking to The Wire, Khandakar, whose organisation is supporting Nurjahan Begum, one of the petitioners in the Supreme Court case, raised another issue. “About 45 lakh of those 48 lakh applicants are married women who had submitted the village panchayat residency certificate to prove their citizenship. They submitted it only because it was admissible then in the approved modalities.”

Though the NRC modalities clearly say that such a certificate can be submitted by a married woman applicant only as a supporting document to prove her lineage along with one of the 14 other listed documents, he said, “Some of these women have other admissible documents too to prove the lineage but they couldn’t submit them then because only one supporting document was sought by the NRC authority during the receipt of the application. For instance, Nurjahan Begum also has a bank account which she could have submitted along with one of the 14 documents required to support her citizenship claim. So we feel that such people should get a chance to produce the other relevant documents so that their names can get included in the draft partial NRC. Though the NRC authorities have said that time will be given for claim and objection, if those women are not given a chance before December 31, we feel that they would be deprived of a chance, which is an unfair step towards them,” he said.

Nurjahan Begum may have another valid document to support her legacy claim, but many of those married women belonging to the poorest strata of society have no other document to prove their citizenship. One of them is Monowara Bera, on whose petition the Gauhati high court passed the February order. These women have stated that since they were never sent to school and were married off before attaining the age of 18, they neither have a school certificate to support the panchayat certificate nor do they have their names in the voters’ list of their paternal family as they moved to their husband’s home before they were eligible for it. They also don’t have other valid documents in their name, say a bank or a post office account, an LIC policy or a land document.

On November 2, accompanied by Satyendra Garg, secretary (Northeast) at the Union home ministry, Registrar General and Census Commissioner Sailesh visited Guwahati to discuss issues related to the preparation of the draft NRC with state government officials and representatives of different student bodies and political and other organisations. Khandakar said they too met the RGI. “The RGI, however, didn’t touch the subject of the validity of the panchayat certificate as it is a sub judice matter.”

Though neither the RGI nor Garg addressed the media in Guwahati after meeting, political parties and other organisations, including state chief minister Sarbananda Sonowal, spoke on the controversy over original inhabitants to reporters on November 4. Urging people “to stand united and defeat the evil designs of some quarters trying to create problems in the updating process of the NRC,” Sonowal said, “The process is moving in the right direction under the supervision of the Supreme Court and some sections are trying to foment trouble in the society to stall the work for their vested interests.” Sonowal is presently in New Delhi to discuss matters related to the draft NRC with the Union home minister.

As per local media reports, the state government has sought additional central forces to “tackle untoward incidents” following the release of the draft NRC. State director general of police Mukesh Sahay is reported to have visited New Delhi this past week “to discuss security implications with home ministry officials”. In July 2010, while the state government was carrying out a pilot project in two circles of the state to update the NRC as per a notification of the RGI, four persons were killed in police firing during a protest march called by the All Assam Minority Students Union.

Since the protest was held to oppose the “complexity” of the modalities set by the Bhumidhar Barman committee, a new cabinet sub-committee meeting was held by the ruling Congress government in July 2011 under the then revenue minister Prithvi Majhi to simplify them in consultation with the stakeholders. In November 2014, those modalities were approved by the central government to carry out the NRC update in the state.

The NRC modalities include two lists.

List A includes the following documents which were issued before midnight on March 24, 1971 and have the name of the applicant or his/her ancestor to prove residence in Assam up to the cut-off date as per the Accord:

However, the Supreme Court in April removed the ration card from the list of valid documents as Hajela reportedly told the court that the central government had objections to it.

If only the name of the ancestor appears in the document submitted as per List A, then the applicant shall have to submit documents as per List B to establish his/her relationship with such ancestor/parents. List B includes the following documents:

In the above list, the ration card is no longer valid.