As Widespread Protests Continue, Citizenship Bill to Be Tabled in Rajya Sabha Today

Legendary singer Bhupen Hazarika's son has refused the Bharat Ratna given to his father to protest against the Bill. New Delhi: A day before the Rajya Sabha is to table the controversial Citizenship (Amendment) Bill for passage, legendary singer Bhupen Hazarika’s son Tej Bhupen Hazarika announced his refusal to accept the Bharat Ratna conferred on his father.

There has been massive opposition to the Bill across Assam and the Northeast.

US-based Tej, in a statement posted on his Facebook pages on February 11, said, “For his fans – a vast majority of people of the Northeast – and India’s great diversity including all indigenous populations of India, he would never have endorsed what appears, quite transparently, to be an underhanded way of pushing a law against the will and benefit of the majority in a manner that also seems to be grossly un-constitutional, un-democratic and un-Indian.”

Stating that “plans are afoot to pass a painfully unpopular bill regarding citizenship that is undermining his (Hazarika’s) documented position,” Tej wrote, “adopting any form of this bill at this point in the manner in which it is being proffered, now or in the future, will ultimately have the sad and undesirable effect of not only disrupting the quality of life, language, identity and power balance of the region, but that of undermining my father’s position – by delivering  a wreaking blow to harmony, inner integrity and unity of the secular and democratic Republic of India.” 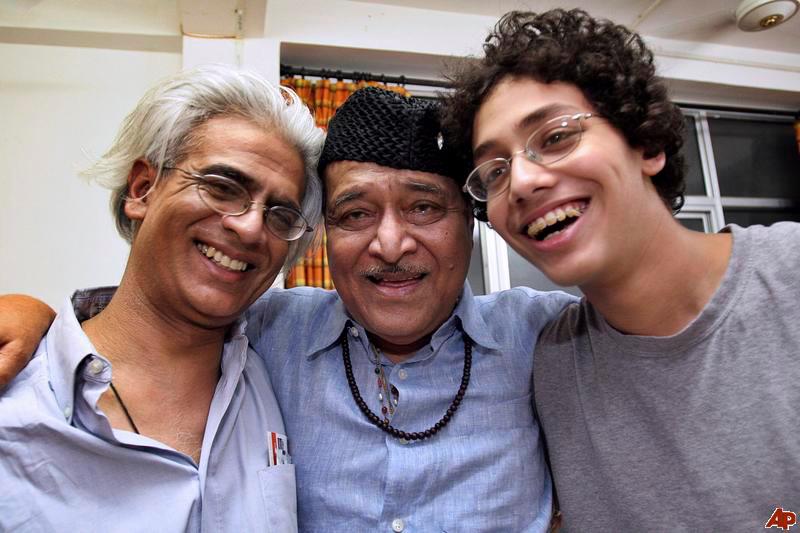 While many in Assam opposing the Bill welcomed Hazarika’s son’s stand, some from his extended family in Guwahati disagreed with him. As soon as the news about Tej’s decision was flashed on Assamese news channels, Hazarika’s brother and singer Samar Hazarika said that Tej hadn’t contacted him about his position on the award.

“We as Bhupenda’s family have welcomed the Bharat Ratna award to him. We had attended the Assam government’s programme celebrating the conferring of the honour to my brother who always stood for unity of the people of the Northeast and the country.” He felt it “was already late and he should get it”.

Manisha Hazarika, the wife of Hazarika’s deceased brother and singer Jayanta Hazarika, also said, “Bhupen Hazarika was an institution. He is above politics and because he took Assam to the world that he has been honoured with the highest civilian award. If this award is made family centric, then it will be a dishonour to the award, the entire northeast region and the country.”

Tej, who had also welcomed the decision on January 26 in a Facebook post, however, stated on February 11 that “Bharat Ratnas and longest bridges (the longest bridge of the country in Sadiya was named after Bhupen Hazarika by the central government in 2017) while necessary, will not promote the peace and prosperity of the citizens of India. Only just popular laws and foresight on the part of leadership will.”

In his statement, he wrote that since the Central government made the announcement, several journalists from Assam had been asking him whether he would accept it for his father. “I go on record to answer that a) I have not received any invitation. So, so far, there is nothing to reject; b) how the Centre moves on this matter far outweighs in importance the awarding and receiving of such national recognition – a display of short lived cheap thrills.”

Tabling in the Rajya Sabha

Meanwhile, the revised list of business in the Rajya Sabha has scheduled the tabling of the controversial Bill on Tuesday. Union home minister Rajnath Singh is listed as moving the Bill to be passed in the house.

A team of the North East Students Union (NESO) had visited Delhi recently to meet leaders of various political parties, including Congress president Rahul Gandhi, to oppose the Bill in the Rajya Sabha. Since February 11, the student leaders are again camping in Delhi to meet more leaders and Rajya Sabha MPs, urging them to not walk out of the house and instead vote against the Bill.

Also read: In Its Hour of Glory, Why Is the BJP in Turmoil in the Northeast?

Since the Bill was passed in the Lok Sabha on January 8, the entire Northeast has been witnessing massive protests and bandhs against it. Most indigenous people of the region feel that it would not only grant Indian citizenship to many Hindu Bangladeshis residing in the Northeast without documents, but would also encourage another bout of migration from the neighbouring country. This, they believe, will affect indigenous people’s political and cultural hegemony in the long run.

The Bill, if it becomes a law, will also dilute the main clause of the Assam Accord of 1985, as per which any Bangladeshi who entered Assam after March 24, 1971 would be detected, their names deleted from the electoral rolls and the person deported to their country of origin. The ongoing updating exercise of the National register of Citizens (NRC) is a step in that direction.

The Accord’s clause was inserted into the Citizenship Act, 1955. However, the new amendment set to be brought by the Narendra Modi government would allow, for the first time in the country, granting Indian citizenship to six groups of people from Bangladesh, Pakistan and Afghanistan on the basis of religion.

Modi, during his visit to Assam, Arunachal Pradesh and Tripura on February 8-9, was shown black flags for bringing in the Bill. Even as the prime minister was addressing a rally in Tripura, protesters released black balloons to send out their message. Modi, however, reiterated that he would bring the Bill as his commitment to the children of “Ma Bharati” in these three countries, and at the same time would consider looking at the protection of the rights of the indigenous people of the Northeast.

Seeing black balloons over the iconic Ujayanta Palace while Narendra Modi addresses the public at the Astabal Ground . pic.twitter.com/feO493c6ig

The BJP’s regional alliance partners have also opposed the Bill. On January 29, the party’s North East Democratic Alliance (NEDA) partners met in Guwahati and urged the Centre not to go ahead with the Bill.

The NPP also backs the coalition government in Nagaland of which BJP is a part, and the BJP government in Arunachal Pradesh. Meghalaya chief minister and president of the NPP, Conrad Sangma, told reporters on February 9 that his party had taken a resolution to quit the National Democratic Alliance if the Bill is passed in the Rajya Sabha. He has since been camping in Delhi.