Efforts at building a broad Bahujan alliance failed in the past because of the contradictory class interests of its constituents. But the picture may now be changing. 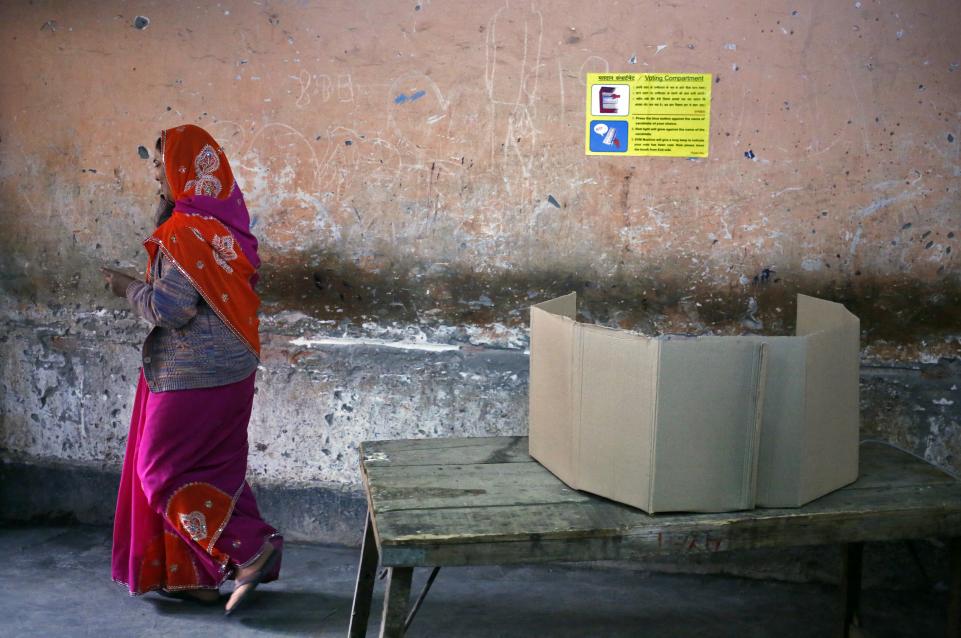 The caste foundation of India’s political structure maintains the hierarchy at the root of the country’s tremendous inequality of status and condition. Credit: Anindito Mukherjee/Reuters

The extension of support by the Bahujan Samaj Party (BSP) to Samajwadi Party (SP) candidates in the recent by-elections for the Phulpur and Gorakhpur Lok Sabha seats and the defeat of BJP on both seats which are considered its strongholds have generated a volley of articles on this new development.

Though some celebrated it and others predicted its doom in the future, an old question of politics is raising its head again – is a Dalit-Bahujan alliance really possible? This question is an important one considering how in the past, similar experiments of bringing Dalits and OBCs together on one electoral platform have consistently failed.

Being located on the disadvantaged side of traditional caste divide in Indian society, both Dalits or lower castes and OBCs or backward castes had an interest in ending the dominance of upper castes and the ‘Brahminical system’ which provides legitimacy to it. It is for this reason that a number of social reformers and anti-caste crusaders thought them to be allies, like Jyotiba Phule who worked for the unity and the upliftment of shudras and ati-shudras.

While Phule’s efforts remained greatly focused on social reform and could not take the form of a political movement, the Self-Respect Movement of E.V. Ramasamy, popularly called Periyar, did emerge as a strong socio-political force in British India. Periyar united people against the dominance of Brahmins, giving leadership to OBC forces opposed to Brahmin dominance which had already started mobilising OBCs since the second half of 19th century and culminated in the formation of Justice Party in 1916. Once a Congressman, Periyar took over the leadership of Justice Party in later years and injected a sense of pride and self-confidence among OBCs while hitting at the economic and cultural roots of Brahminical hegemony and religion. The Dravidian politics of Tamil Nadu owes a great deal to him.

However, though Dravidian politics succeeded to a great extent in reducing the influence of Brahmins and turning OBCs into the dominant political force in Tamil Nadu, it failed to achieve similar results for Dalits. In fact, the Justice Party failed to gain their support in pre-independence days itself, as the Dalits accused it of serving only the interests of OBCs.

Some scholars allege that the main reason behind this contradiction within the anti-Brahmin movement – that sought equality with Brahmins for OBCs, but discriminated against the Dalits – is the contrary economic interests of both communities. While OBCs or shudras were the landowners, the Dalits or ati-Shudras were agrarian labourers (even bonded labourers in many cases alike the Pariahs or Panchamas) and hence to extract maximum profits from agriculture, the OBC masters needed their Dalit labourers to be underpaid and servile.

Doomed again: the SP-BSP alliance of 1993

But attempts to unite both communities did not stop there. B.R. Ambedkar, who focused upon the upliftment of Dalits, tried to bring Dalits and OBCs together in an electoral front when he turned his Scheduled Caste Federation into the Republican Party of India (RPI) – a party whose constitution said that it was meant to be a political platform for all oppressed sections and not just Dalits.

However, Ambedkar died the same year and the RPI failed in uniting even all the sub-castes of Dalits, ending up as a party restricted to the Mahars only. The political legacy of Ambedkar was then claimed by Kanshi Ram, a Punjabi Dalit government employee and founder of the Bahujan Samaj Party. Though the party primarily focused on Dalits, the idea of ‘Bahujan’ involved all oppressed sections, including the OBCs and Muslims. While the party partially succeeded in this task and started getting the support of ‘extremely backward class’ (EBC)  communities like Nishads, Rajbhars and Shakyas, its main support base remained Dalits. The mantle of being a party of OBCs was then claimed by Mulayam Singh Yadav’s Samajwadi Party in UP, which emerged as the biggest party after the Janata Dal split.

To challenge the rise of the BJP riding on the wave of the Ram Mandir movement, both SP and BSP forged an alliance in the 1993 elections, which marked the coming together of Dalits and OBCs (along with Muslims) or the ‘Bahujans’ on one electoral front. The alliance succeeded in halting the BJP from achieving a majority mark even at the peak of the mandir agitation after the Babri mosque demolition in 1993 and also succeeded in forming the government – with the SP winning 109 seats and BSP 67.

However, the bonhomie was short-lived as reports of personality clashes between the then chief minister Mulayam Singh Yadav and an ‘imposing’ Mayawati (who was called ‘super-CM’ by the media) started emerging while atrocities on Dalits by the police (like the Shergarhi firing of 1994) or dominant OBC castes added to the tension.

Matters culminated in the ‘Guest House Kaand’ of June 1995 when Mayawati was attacked by leaders and supporters of the SP while meeting with her party’s legislators to decide on a strategy for withdrawing support from the alliance government and forming another alliance with the BSP at the helm. The alliance and the much-touted ‘Dalit-OBC unity’ came to an end after this, and since then both parties have become each other’s nemesis. 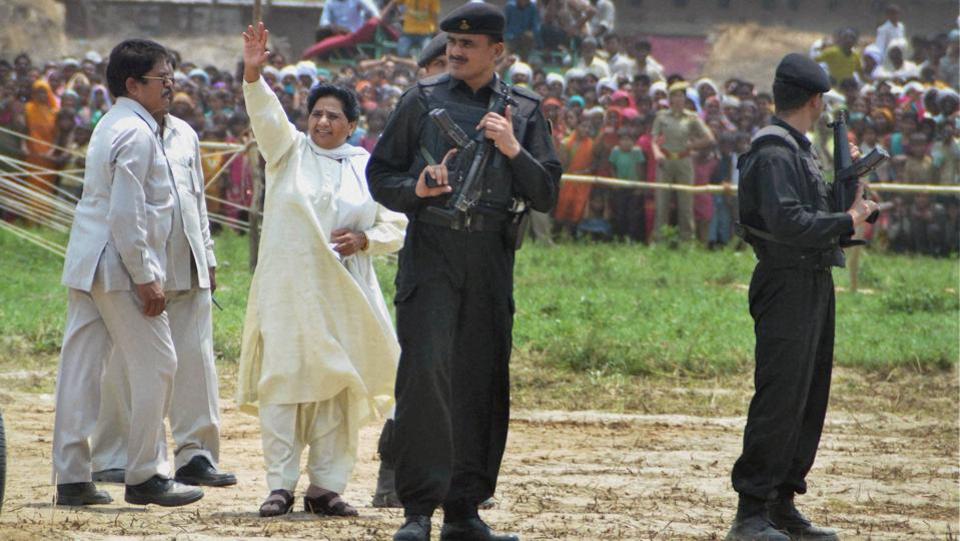 BSP chief Mayawati visits Katra Shahadatganj village, which shot to national fame when two Dalit girls were found raped and hanging from a tree in May 2014, for a rally. Credit: PTI

The conflict in economic interests

While the personality clashes between the two leaders had been termed as the main reason for this fallout, the clash in economic interests of the support bases of respective parties i.e. the Dalits and OBCs, was the main reason behind the end of the alliance. Justice Party leaders, the OBC castes of UP (and other north Indian states), especially the dominant OBCs like Yadavs, Kurmis and Jats, were land-owners, while the Dalits were mostly agrarian labourers or tenants. Hence, much like what happened in Tamil Nadu – where the OBC landlords wanted Dalit labourers to remain underpaid and be less assertive – the gains made by the Green Revolution (which mainly benefitted land-owning OBCs) increased this division further.

This becomes clear from a number of studies on the Bhartiya Kisan Union (BKU) – a peasant organisation in UP which is dominated by Jats and OBC castes. While the BKU tried to paint its struggles for higher returns on agriculture and cheap inputs as a ‘Bharat vs India’ fight, scholars pointed towards the wide rift between the land-owning OBCs and their Dalit landless labourers and their exploitation and denial of dignity at the hands of the OBC landlords. It was these contrary economic interests and exploitative land relations which led to the ‘impossibility’ of ‘Dalit-Bahujan’ unity in practice. However, changes in the rural landscape since the onset of liberalisation could alter the picture.

Currently, more than 85% of India’s farmers are small and marginal, with landholdings of 0.1 to 2 hectares and the average landholding size is constantly declining; as per agricultural surveys, it was 1.33 hectares in 2000, 1.23 hectares in 2005 and 1.15 hectares in 2010. Agricultural income is also decreasing constantly as farmers with two hectares or less land are unable to meet expenses through agriculture alone, according to a 2013-14 Centre for the Study of Developing Societies (CSDS) survey in 18 states.

Hence, farmers are forced to compensate this loss from other sources and the National Sample Survey Office’s (NSSO) 70th round confirms that only 47.9% of the income of agrarian households comes from cultivation alone on an average; 8% comes from non-farm business and 32.2% comes from wages/salary, with only 63.4% of total agricultural households being primarily dependent on agriculture as the main source of income. This has severely damaged the old association and pride that farmers attached to agriculture.

According to the 2013-14 CSDS survey, 22% of farmer respondents dislike farming and given a choice would like to quit. Fast paced urbanisation and expansion of real estate markets gives them a chance to do so, using land as a medium for the transition. It is due to this reason that in the past couple of years, a number of farmers affected by land acquisition for expressway or real estate projects in the once assertive and proud farmer belt of BKU (in western Uttar Pradesh) chose to agitate and escalate their confrontation with the state machinery for higher prices.

During my research into these agitations – Ghodi-Bacheda agitation, 2008,  Tappal, 2010,  Bhatta-Paarsaul agitation, 2011 – I found that almost all of them were aimed not against land acquisition per se but prices, and the participants felt a sense of achievement when the prices were increased.

When this is the situation of land-owning, once ‘well-off’ farmers, imagine the conditions of the Dalit landless labourers dependent on them. In the changed scenario, they can’t remain dependent on less profitable agrarian work and this is exactly what’s happening. Masses of Dalits who were once landless labourers in villages are migrating to cities and towns, switching to other forms of employment from construction labour to menial jobs, thela–rehdi based vending, small scale enterprises and a range of market-based opportunities made available by globalisation and liberalisation.

As an example, take the case of Bihar, where agrarian labourers were in significant numbers with most of them coming from the Dalit community. The All India Agrarian Labourers Association (AIALA) is a mass organisation of agrarian labourers, associated with the Liberation faction of CPI (ML). AIALA conducted a survey about the status  of its constituent masses in Bihar in 2014 and their findings were startling. They found no ‘pure’ agrarian labourers i.e. labourers solely dependent on agrarian labour round the year, in the whole state as it was not sufficient to make ends meet. Hence, most of the once khet-mazdoors would do agrarian labour (even in other states like Punjab) only for a few months, trying to compensate for the income gap through various other forms of employment in other months.

These developments indicate that Indian agriculture and villages are going through a huge transformation. In the newly emerging scenario, old agrarian land relations which acted as contrary economic interests between the Dalits and the OBCs are drastically changing, leaving old fault lines obsolete. Caste differences and exploitation may continue even in future, but they may not be based upon unequal and exploitative land-relations between the Dalits and OBCs, as was the case in the past. These changes create new possibilities for the emergence of solidarities between the Dalits and OBCs and the ‘second’ SP-BSP alliance in UP may just be an example of this new phenomenon.