Five detailed fact-checks show how the BJP in Bengal is resolute in twisting narratives and peddling clear untruths on the campaign trail. 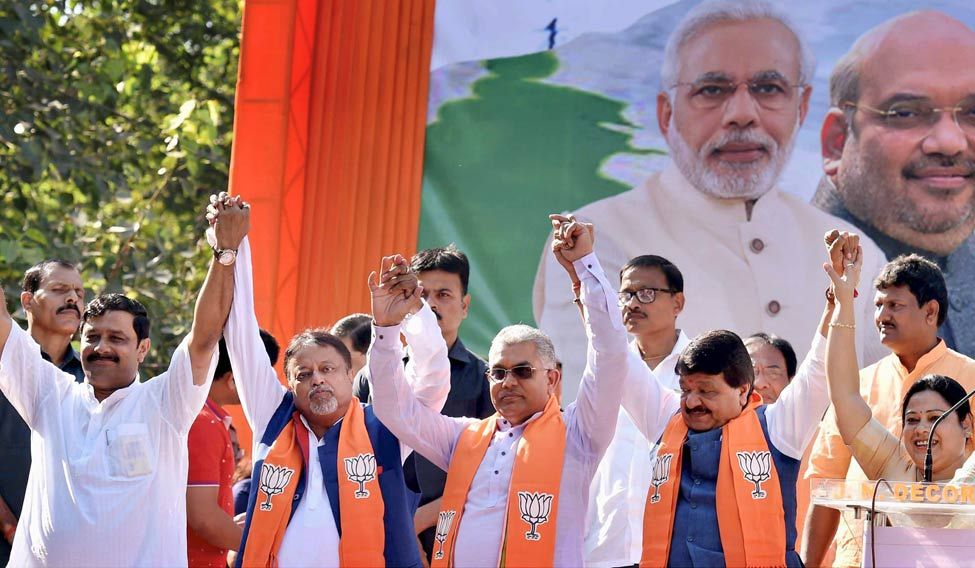 File photo of senior leaders of the BJP in West Bengal protesting against the state government. Photo: PTI.

Kolkata: Despite the fact that several senior BJP leaders of the Bengal unit, including party’s state in-charge Kailash Vijayvargiya and co-in charge Amit Malviya, have been repeatedly called out for spreading misinformation over the past few years, there has been no effect on the stream of false facts dished out by the party brass in Bengal, where assembly elections are scheduled to be held this year.

In defiance of numerous cases filed against BJP MLAs, MPs and office bearers for spreading fake news by the West Bengal police, the frequency and volume of misinformation disseminated by the Bengal BJP has significantly gone up in the past few days.

Below, we list out five recent cases, where the party has gone to town spreading fake news or twisted narratives to fuel hate during the ongoing election campaign.

On January 23, Mamata Banerjee refused to deliver her scheduled speech after a section of the audience at Victoria Memorial greeted her with ‘Jai Shri Ram’ chants in the presence of Prime Minister Narendra Modi during a programme to mark the birth anniversary of Netaji Subhas Chandra Bose. It did not take time for the video clip of that moment to go viral.

While Modi did not refer to the incident while delivering his address after Mamata (who ended her speech only with ‘Jai Hind’ and ‘Joy Bangla’) BJP leaders, including Amit Malviya and state unit president Dilip Ghosh, took digs at the chief minister for taking the ‘Jai Shri Ram’ chant as an insult.

The next day, Bengal BJP’s official Facebook page uploaded two video clips in a post with the caption, “Why such hypocrisy, Mamata pishi? Welcoming the Islamic prayer yet miffed with Jai Shri Ram!”

‘Pishi’, which is literally Bengali for ‘father’s sister’ or ‘aunt’ is often used by BJP to refer to Banerjee, as the term brings up her nephew, MP Abhishek Banerjee, who the opposition accuses of extortion.

In the 1.13-minute video clip, the first 12 seconds shows Mamata praying with the chant ‘La ilaha illallah Muhammad ur Rasulallah‘. The rest of the clip shows the Victoria Memorial incident.

However, a search for the original video clip reveals that Banerjee’s 12-seconds in the BJP’s speech was a clipped version of a long speech in which she also chanted Hindu shlokas.

A video clip of a longer duration (1.35 minutes) shows her talking of communal harmony, bringing up goddess Durga, and chanting Hindu shlokas of the goddess for 25 seconds. She also prayed to Allah, Jesus Christ and Guru Nanak at the same meeting.

Nevertheless, the BJP’s Bengal unit’s Facebook page made yet another post with the 12-second video clip, adding the comment, “If Bengal chief minister Mamata Banerjee can chant Islamic prayers at a government event, why does it cause her trouble if she is greeted with ‘Jai Shri Ram’? Appeasement? She, by her acts on Netaji’s anniversary, has insulted Netaji and the bearers of his legacy.”

After a road accident on January 19 at Dhupguri in north Bengal, which claimed 14 lives, the Prime Minister’s Office tweeted at 10.37 am on January 20 to announce Rs 2 lakh compensation to the nearest kin of each of the victims.

The road accident in Dhupguri in Jalpaiguri (West Bengal) is extremely anguishing. In this time of sadness, prayers with the bereaved families. May the injured recover soon: PM @narendramodi

At 2.04 pm, West Bengal minister Goutam Deb announced on Twitter the state government’s decision to compensate the kin of the deceased with Rs 2.5 lakh each and Rs 50,000 to the injured.

The BJP’s state unit president, Dilip Ghosh, in a Facebook post the next day alleged that the state government was acting in a communally biased way even in dealing with accident victims.

“Muslim appeasement even in compensation. In Malda, six (Muslims) die in a blast in a factory and Janab Firhad Hakim flew with compensation cheques on a helicopter. In a road accident, Dhupguri, 14 (Hindus) dead. But the state government is nowhere to be seen. The prime minister provided compensation. There is no more need for this government of appeasement,” Ghosh wrote on Facebook.

The factory blast incident Ghosh referred to took place in the afternoon on November 19, 2020, when a machine at a plastic factory at Sujapur area in Malda district exploded. Bengal BJP leaders were quick to demand an investigation by the National Investigation Agency (NIA), calling it an incident of a bomb blast.

Mamata Banerjee had asked urban development minister, Firhad Hakim, to visit the spot. In the evening, the government called it a case of an accident and announced a compensation of Rs 2 lakh for the deceased and Rs 50,000 for the injured.

On the other hand, within hours of the blast, Ghosh, who was in Burdwan district of south Bengal, demanded a probe by a central agency like the NIA. He alleged that the state government had lost control over the administration due to its policy of “Muslim appeasement” which encouraged infiltration, including that of the Rohingya.

Ghosh shared a supposed quote of Netaji praising Hindutva ideologue Savarkar without attributing it to a source.

The quote, when translated into English, reads, “When due to misguided political whims and lack of vision, almost all the leaders of the Congress party have been decrying the soldiers in the Indian National Army as mercenaries, it is heartening to know that Veer Savarkar is fearlessly exhorting the youths of India to enlist in the armed forces. These enlisted youths themselves provide us with trained men and soldiers for our Indian National Army.”

Further investigation revealed the quote came into circulation from a Swarajya magazine article in 2013, where the author attributed the quote to a biography of Savarkar, penned by Dhananjay Keer. This correspondent found that Keer had indeed mentioned this quote on page 350, but did not cite any source.

This writer failed to locate the particular quote, or for that matter any speech delivered on June 25, 1944, in Netaji’s collected works and collection of speeches.

On the other hand, Netaji’s consistent statements on Hindu Mahasabha, Muslim League, Savarkar and Mohammad Ali Jinnah reveal a completely contrasting picture as to how Bose looked at them. In 1940, after meeting Jinnah and Savarkar to get their support for his efforts to launch an attack on the British forces during World War II, Bose had written that Savarkar “seemed to be oblivious of the international situation and was only thinking how Hindus could secure military training by entering Britain’s army in India”.

“From these interviews, the writer was forced to the conclusion that nothing could be expected from either the Muslim League or the Hindu Mahasabha,” Bose wrote.

Two years later, Bose said in a broadcast from Azad Hind Radio, Germany, on August 31, 1942, “I would request Mr. Jinnah, Mr. Savarkar, and all those leaders who still think of a compromise with the British to realise once for all that in the world of tomorrow there will be no British Empire. All those individuals, groups or parties who now participate in the fight for freedom will have an honoured place in the India of tomorrow. The supporters of British imperialism will naturally become nonentities in a free India.”

On January 25, a post from the Bengal BJP’s Facebook page said, “Illegal arms factory found in Kaliachak, two from Munger held.” The post went on to add, “Industrial belt or armoury! The state government has turned Bengal from an industrial hub to a factory of illegal arms and bombs. Is the ruling party trying to govern the state with weapons instead of industries?”

The fact remains that the illegal arms factory was discovered by the state police, the special task force of the CID, in collaboration with Malda district police.

The Bengal BJP’s Facebook page made yet another post, on January 25, referring to the Malda incident and the recovery of explosives from Howrah district. The post said, “Under Pishi’s rule, Bengal is a safe zone for terrorists. While Pishi is busy in an election campaign, Bengal is being captured by terrorists.”

The fact remains that the explosives in Howrah were also recovered by the state police on January 9.

On December 15, Dilip Ghosh’s Facebook page released a cartoon showing the state Mass Education Extension and Library Services minister, Siddiqullah Chowdhury, standing on the bonnet of a vehicle carrying vaccines with a bamboo stick in his hand. It showed the minister as saying, “Will bash with bamboo sticks and build Bengal,” while a common man was running away from the scene saying, “Forget vaccines, let me save myself from jihadi beating first.”

Another comment in the cartoon said, “Library minister Siddiqullah Chowdhury protests with a bamboo stick in his hand, blocking a car carrying vaccines.” The whole post was captioned “New form of jihadi protest in Bengal”.

BJP’s Bengal in-charge, Kailash Vijayvargiya, too, made a similar allegation.

The fact remains that Chowdhury on January 13 led a pre-announced farmers’ agitation, in support of the protests in Delhi, blocking a National Highway in East Burdwan district. Media reports in Bengal said when the car stopped due to the road blockade, Chowdhury took up a bamboo stick, and used it to disperse the protesters to clear the road for the vehicle carrying the vaccines.

“The minister chased down the protesters with a bamboo stick to disperse the blockade,” said another media report in TV9 Bangla. The video that Vijayvargiya shared also shows Chowdhury chasing away those blocking the road with the bamboo stick in his hand and later climbing up on the bonnet of a car to address the gathering. Vijayvargiya, however, sought to ask why the minister was “seen beating people”.