As AAP Eyes 'National Party' Status With 2022 Assembly Polls, A Look at Where It Stands Now

The strength of AAP today in the poll-bound states of Uttar Pradesh and Uttarakhand, among others, has gone up several notches from what was in 2014 when it had contested the Lok Sabha polls unsuccessfully. 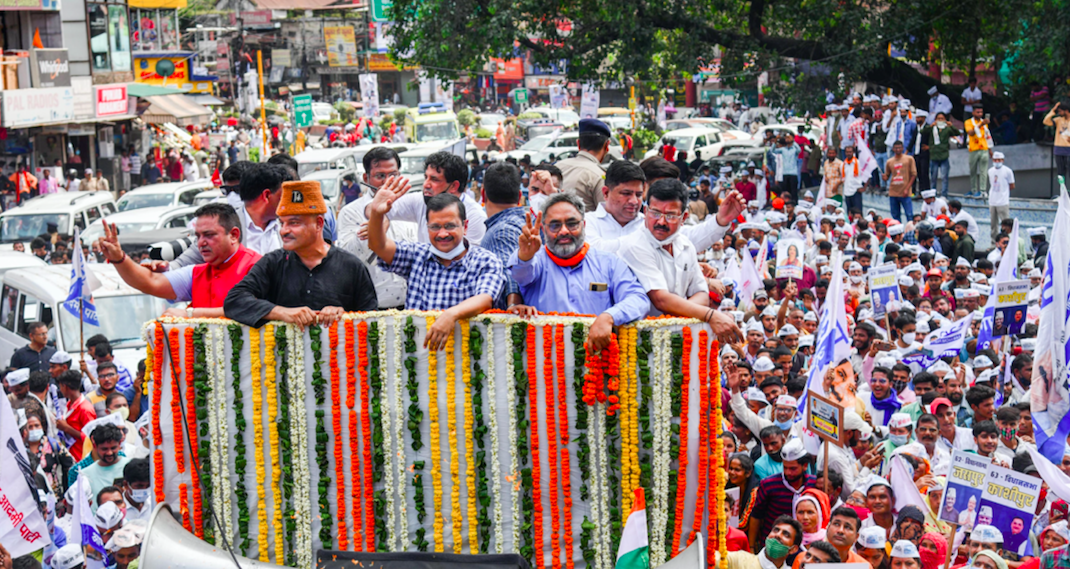 New Delhi: With a better party organisational structure and leadership than it had in the past, the Aam Aadmi Party (AAP) today is going to elections in the poll-bound states of Uttar Pradesh, Uttarakhand, Punjab and Goa with a methodological approach. If these elections – as AAP hopes – increase its electoral strength in the states beyond Delhi, then it is on the road to achieving the coveted ‘national party’ status, recognised by the Election Commission.

The strength of AAP today in these poll-bound states has gone up several notches from what was in 2014 when it had contested Lok Sabha polls only to draw a blank in all states barring Punjab where it had won four seats.

Born out of the Anna Hazare-led Lokpal agitation in 2013, AAP in the same year contested the Delhi Assembly election to emerge as the second largest party after the BJP. With the outside support of the Congress party, it formed its first government with Arvind Kejriwal at the helm. But Kejriwal resigned from the chief ministership and decided to take his party into the Lok Sabha polls due in mid-2014, hoping to pull off another surprise. However, it was not to be as the BJP came to power riding on the Narendra Modi wave.

Picking itself up from the debacle in the Lok Sabha polls, AAP fairly quickly learnt its lessons. It realised that it was a mistake to contest polls without having a proper leadership and organisational structure in the states.

By having these main leaders, who are close to Kejriwal, in important positions, AAP has galvanised its cadre and improved the organisational structure of the party in each of these poll-bound states. As Sanjay Singh told The Wire earlier this year, the party has also been working at creating Assembly, block and booth level committees in the states.

This apart the party has also been contesting the civic body and panchayat elections in the poll-bound states to test the waters and its preparedness for the Assembly polls.

The party has also announced its chief ministerial candidate for the hill state of Uttarakhand. The name of Colonel Ajay Kothiyal (Retd.) was announced by Kejriwal, breaking away from the tradition of the party, which generally prefers to withhold the name of the chief ministerial candidate before polls. Apparently, it wants to capture the attention and the support of a large number of serving and retired soldiers from the state and their families.

On the other hand, the party has deliberately stayed away from the ticklish issue of projecting a chief ministerial face in the other states.

In Punjab, where two-time Lok Sabha MP Bhagwant Mann is one of AAP’s most popular faces, Kejriwal gave a cryptic reply when asked about who would lead the state if the party came to power by merely saying that the person would be the “pride of Punjab” but the name would only be announced when the time was ripe.

Incidentally, after Delhi, it is Punjab where AAP has in the past come closest to forming the government. Ahead of the 2017 Assembly elections, there was a time when the opinion polls even gave the party a chance of winning 100 of the 117 seats in the state Assembly. But the party did not come close to the figure. While the Congress, led by Captain Amarinder Singh, had secured a complete majority by winning 77 seats, AAP did well to pip Shiromani Akali Dal (Badal) to the second spot. It won 20 seats but more crucially bagged nearly 23.8% of the votes polled.

This time AAP is trying to build on those numbers. With the Congress having split down the middle and Captain floating his own party, and the National Democratic Alliance of SAD (Badal) and BJP having also ended in the state, AAP stands a great chance of doing much better in a divided house.

In Uttarakhand, the party – which traditionally is seen to do well at the expense of the Congress – is sensing a good opportunity as the BJP faces anti-incumbency. As for the Congress, while former chief minister Harish Rawat remains the most popular face, his own insistence that the party should have a Dalit chief minister for the first time in the state has sent confusing signals.

The recent return of former minister and Speaker Yashpal Arya to the Congress (he had gone to the BJP ahead of the 2017 polls) may be an indication that the grand old party is still a formidable force in the state. Political watchers insist the AAP could gain by giving tickets to rebels from both rivals, BJP and Congress.

AAP has also been regularly raising issues pertaining to the state through its national platform. So be it the Char Dham Board issue, where it demanded its scrapping, or issues of corruption in the state, the issue of large scale unemployment and job guarantee schemes, or the handling of the recent floods by the state government, the party has been making regular attempts to be seen as one concerned about the welfare of the people.

Incidentally, in all the poll-bound states, AAP is also promising to implement the promises it made to the electorate in Delhi: a complete overhaul of the education and healthcare system, and free electricity up to 300 units per month. While initially, the major parties in these states were not taking these announcements seriously, the fact that they have also begun echoing them shows that they fear that these promises could reap a windfall for AAP.

In Uttar Pradesh too, under Sanjay Singh, the party has now become visible on the political circuit. From visiting the homes of victims of caste or religious violence to organising meetings with protesting farmers or traders, the party has been utilising every opportunity to make electoral inroads. While many believe that it may not be easy for AAP to gain too much in a state where other players like Samajwadi Party and Bahujan Samaj Party have significant vote banks, Singh, while remaining unfazed by these issues in the past, had insisted that AAP had done well in other states despite not resorting to politics of caste or religion. 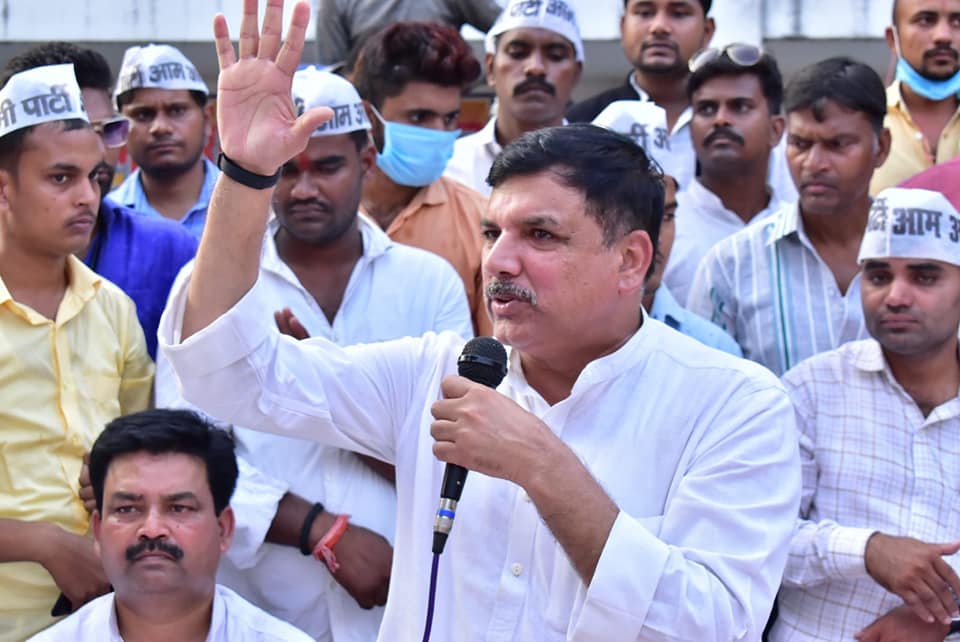 “There are governments which only speak about what they will do. Here is the model of Kejriwal and Sisodia, which representatives from abroad appreciate when they come to Delhi. The New York Times discussed Delhi’s mohalla clinics and education model. Earlier people said, ‘learn from America’, now they say, ‘learn from Kejriwal’. [The Wire could not ascertain which article of The New York Times Singh was referring to.] So we need to take this model to the people and convince them that they have been cheated, beaten with lathis, robbed of jobs and only thrown into jails with cases piled on them. We have to convince them that we are a party that can change the face of UP. If we are able to convince them with this, then we will get major success in UP,” he had said.

Also read: As AAP Makes a Foray Into UP, it Needs to Learn From Past Mistakes

As for the state of Goa, the AAP first tried its hand in state politics during the 2017 Assembly elections. Though some opinion polls had given it up to 14 seats of the 40 seats, it failed to win any and ended up fourth (with a 6.3% vote share) behind BJP, Congress and Maharashtrawadi Gomantak Party.

Five years on, the party has made a strong presence on the political map in the state. By getting former deputy chief minister Dayanand Narvekar, who was earlier with MGP and Congress, to join it, the party has sent a signal that people are seeing value in it. This apart, a noted dramatist of Goa Rajdeep Naik has also joined AAP recently.

On the other hand, the party has also had some setbacks in the state. In December 2020, its Goa founder Elvis Gomes, who was the chief ministerial face in 2017 had quit, saying the party was being controlled from Delhi. Two other members, former spokesperson Olencio Simoes and Vasant Gopi Naik, also resigned in August.

But AAP, under Marlena, has been sticking to its plans. In Goa too, AAP has been raising issues of interest to the masses on a regular basis to garner support. A couple of weeks ago, its state unit vice-president Valmiki Naid while citing a UNESCO report accused the BJP of failing in the education sector. He said as per the report 239 schools were either run by a single teacher or did not have more than two teachers.

A good showing in the Assembly elections can make AAP eligible to become a national party. For becoming one, a registered party has to fulfil one of the three of the following conditions:

In the case of AAP, fulfilling the second criteria now appears to be on the cards. Going by the past record, it looks like it is headed to securing at least 6% votes in the states of Punjab and Goa and seems on course to do well in Uttarakhand too.

As of now, there are seven recognised national parties. They are All India Trinamool Congress, BSP, BJP, Communist Party of India (Marxist), CPI, Congress and Nationalist Congress Party.

The benefits of being recognised as a national party come in terms of being allowed a reserved symbol by the Election Commission as also benefits pertaining to the number of proposers required for filing nominations and in getting free airtime on national media.

According to the Election Commission of India, “The candidates set up by a political party registered with the Election Commission of India will get preference in the matter of allotment of free symbols vis-à-vis purely independent candidates. If a party is recognised as a `National Party’ it is entitled for exclusive allotment of its reserved symbol to the candidates set up by it throughout India. Recognised `State’ and `National’ parties need only one proposer for filing the nomination and are also entitled for two sets of electoral rolls free of cost and broadcast/telecast facilities over Akashvani/Doordarshan during general elections.”