With Another Win in Delhi, Is Arvind Kejriwal Moving to the National Pulpit?

The AAP model of governance, focusing on micro-level issues, has dealt a severe blow to the BJP's communal campaign and politics.

The Aam Aadmi Party’s (AAP’s) impressive third consecutive victory in Delhi catapults what we can call a ‘Delhi model of governance’ to the centre of political discussion. Not only that, the AAP’s electoral triumph – juxtaposed with the Bharatiya Janata Party’s (BJP’s) abysmal performance – could push Arvind Kejriwal closer to the national pulpit.

Kejriwal’s party has won 62 out of 70 seats, while BJP have won eight.

Let’s not forget that the BJP rode to power on the back of a much-touted, and roundly criticised, ‘Gujarat model of governance’ heralded by Narendra Modi. The question is: are we going to witness a Modi vs Kejriwal contest in the next national elections? Have the 2020 Delhi assembly elections opened up a way to approach the Lok Sabha elections in 2024? That the question can even be asked is significant.

Conventional wisdom draws a binary between state and national elections. Political pundits repeatedly gesture towards a local vs national distinction in issues of politics as well as concerns of governance. Let’s consider, in this context, the pitches made by the two political parties, AAP and  BJP, in the just-concluded Delhi elections.

If the AAP campaigned on its five years of performance focusing on the model of governance it created, then the BJP ran a dangerously divisive and vicious campaign. In a deliberate strategy, Kejriwal stayed away from sites of anti-Citizenship (Amendment) Act and National Register of Citizens protests, refusing to be drawn into acrimonious debates with the BJP on citizenship. That his party voted against the CAA in the Lok Sabha debate made clear its stand on what perhaps has emerged as the single most emotive political issue of recent years.

On the other hand, what needs to be emphasised is that the AAP model of governance has dealt a severe blow to the BJP’s communal campaign and politics. Since 2018, the BJP has been solely preoccupied with polarising the people along the Hindu-Muslim axis, whipping up issues that feed such politics – be it the Ram Mandir issue or citizenship. Failing to deliver on the economic front, the BJP devoted its energies to deepening demographic anxieties and criminalising Muslims. The party scaled up its campaign to dangerous heights in Delhi, hoping to draw more Hindus into their fold.

It looks like this time around Delhi, not known for being excessively averse to the Hindu Right has, however, privileged governance over communalism. It would be naive to assume that the AAP’s recent victory is tantamount to a rejection of Hindutva politics. It can nevertheless be argued that strengthening government schools, paying attention to under-privileged parents, treating them as important stakeholders in the school education system, alongside building easily accessible local health centres, has proven rewarding.

With its emphasis on social sectors – particularly health and education – the Delhi model challenges the Gujarat model of governance shepherded by then state chief minister Narendra Modi. In its 2014 Lok Sabha campaign, the BJP pitched its Gujarat model as Modi’s unique achievement. The effort was to downplay the 2002 anti-Muslim pogrom in the state by holding up a model they claimed could be extended to the whole country. Six years on, we not only know that the Gujarat model was hugely flawed, but also that wishful attempts to replicate that model were bound to fail.

In fact, the Delhi model is strong precisely in the sectors where the Gujarat model floundered: education and health. In a Wall Street Journal article in 2012, Modi said Gujarat’s economic progress can become a model for the nation. Questioned about widespread malnutrition in the state, Modi’s took the plea that the state was by and large vegetarian. Besides, he added, Gujarat is also a middle-class state, and “the middle class is more beauty conscious than health conscious – that is a challenge. If a mother tells her daughter to have milk, they’ll have a fight. She’ll tell her mother, ‘I won’t drink milk. I’ll get fat.’ They have money but she’s beauty conscious, she’s not health conscious.”

The Gujarat model also had little to show by way of primary school education. Two years ago, the Centre’s National Achievement Survey showed a continued fall in learning outcomes of students from Class III to Class VIII in both government schools and government-aided schools. The sharpest decline was registered in mathematics, language and science. According to a news report: “…the response level of students fell from 65 to 47 per cent in mathematics, 71 per cent to 64 per cent in language and 68 to 52 per cent in science subjects.”

Contrast this with the AAP’s Delhi model. Since coming to power in 2015, the Kejriwal government has made good on its promise of making school education a key governance plank. This meant revamping government schools both in increasing financial allocation and improving the quality of education.

The AAP government successively increased its budget allocation for school and higher education from Rs 6, 208 crore in 2015 to Rs 15,133 crore (budgeted) in 2019-20. Moreover, the increased funds have been used to improve the standard of education in Delhi’s government schools. According to the Neta App Janata Barometer Survey conducted on the eve of the February 8 polls, a high 61% of respondents (out of 40,000 citizens surveyed across 70 constituencies), said they would prefer sending their children to a government rather than a private school. 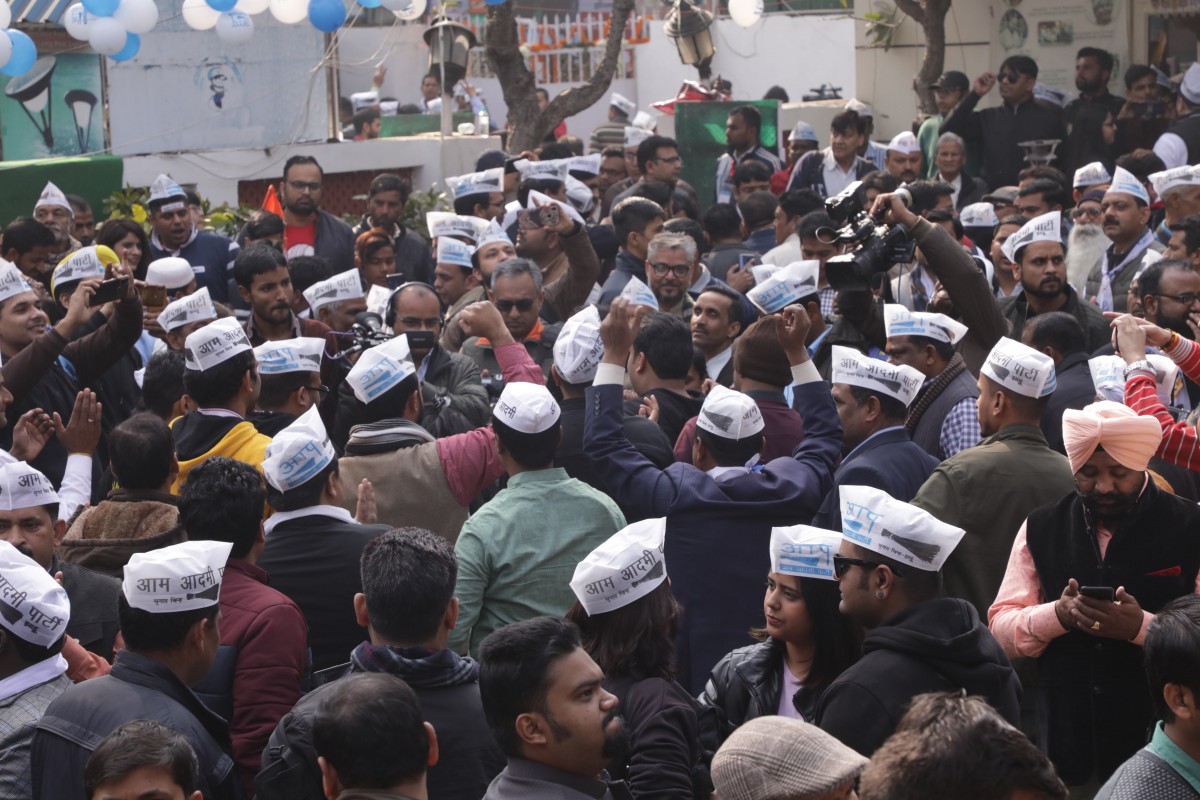 Everything in the AAP government-led system has not fallen in place. But the Kejriwal government has indeed turned the lens of governance on education and health. And in doing so, the party has set a new, welcome precedent. Unlike the Modi government at the Centre, the AAP has not made grand policy declarations. Instead, the Delhi government has paid attention to micro-level concerns, by sprucing up government schools and instituting mohalla clinics.

Good governance, however, is not the only criterion for judging a government. In the days and months ahead, the AAP will face huge political challenges. The ongoing protests against the CAA/NPR/NRC will demand that AAP take a categorical stand on a matter as critical as the possibility of disenfranchisement of large sections of Muslims. Uncomfortable matters will have to be named and dealt with.

It may be reasonably argued that the BJP is not going to back down on its agenda of promoting divisive politics. Insurgent students and restless citizens alike will demand answers from the thrice-elected chief minister. How Kejriwal deals with these volatile subjects remains to be seen.

Also read: BJP Has Lost the Delhi Elections, But Done Better Than it Did in 2015

In either case, nitpicking aside, one has to recognise the significance of the results in Delhi for what they are. Not only has AAP returned with a substantial majority, it has done so after years of sustained obstruction by the Central government – from the intimidation of its ministers to the deployment of the full-force of Delhi’s Lieutenant Governor against the party.

Since 2016, the BJP has systematically used rhetoric and force to both create crises on campuses like Jawaharlal Nehru University, Jamia Millia Islamia and (as we recently learned) Gargi College. It has used the police to confound the Delhi government’s ability to address local matters, and – in the lead up to the present elections – described Kejriwal as a “terrorist,” colluding with protesters in Shaheen Bagh.

This is the context in which we must understand the verdict in Delhi, along with AAP and Kejriwal’s future on the national stage.