Are We in for a Foundational Shift in India’s Nationalist Imaginary?

In Modi, the Indian middle class has found the hero they always yearned for. 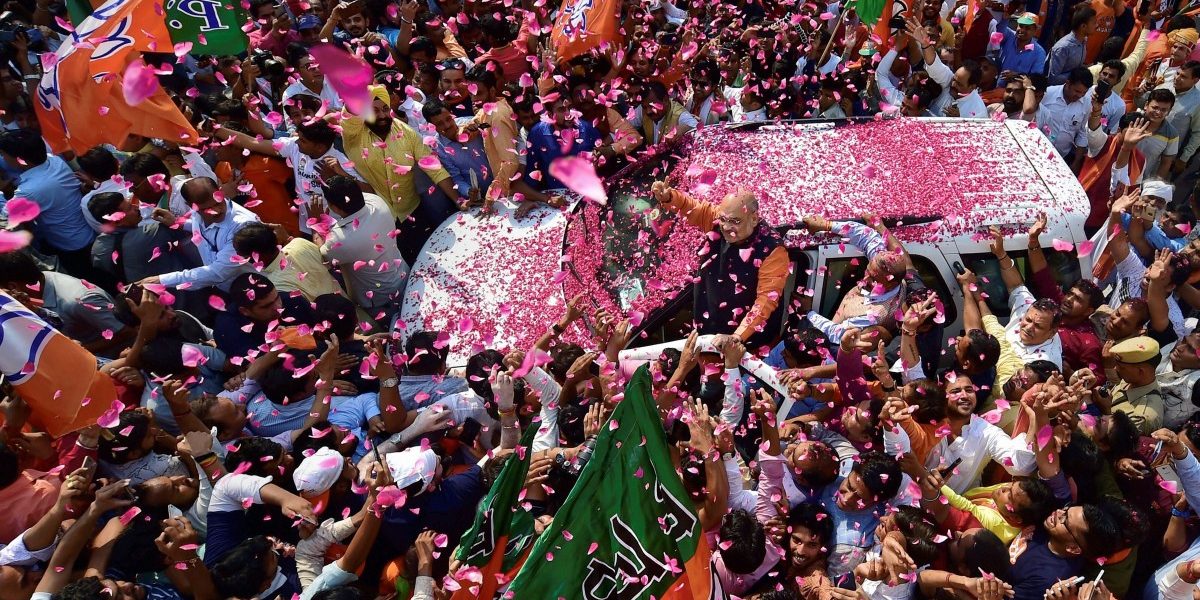 BJP president Amit Shah flashes a victory sign at the party headquarters in New Delhi on May 23, 2019. Credit: PTI/Manvender Vashist

Endless explanations have emerged with regard to the BJP’s thumping return to power with Narendra Modi at the helm for a second term.

After we have disabused ourselves from much of the hype that surrounds this event, we are not in any way closer to an answer. There is little to suggest that most of those who voted for him have benefitted much in an economic sense.

From the accounts we have, it’s clear economic inequality has widened in India, there is increase in unemployment – the palliatives that have been offered can hardly make a dent in rural unrest – India’s financial structure remains deeply impaired in the past five years, and crony capital is on the rise.

The manifestoes of several parties, particularly the Congress, had much to offer for economic revival in India, compared to that of the BJP with much stress on GDP growth.

If the primary striving of a political party is the pursuit of power, then the BJP went about it ruthlessly, one might say with gutsy elan, compared to the moral innuendos that the Congress often dishes out. The BJP mounted an electoral strategy chillingly geared to its pursuit: identification of its electoral arenas of strength and promise; constant and region-specific monitoring of the moves of the opposition; booth level focus; careful planning; and extensive use of media and other communication mechanisms.

Also read: A Test of Nationalism – Who Needs to be Afraid in Modi’s India?

BJP’s organisation, with its ideologically-driven core cadre and unlimited resources, was there for everyone to see. The record of certain watchdogs such as the Election Commission too may not have been up to the mark always.

Prime Minister Narendra Modi towered over the BJP campaign, demonstrating at the same time supposed unity within the BJP electoral formation and immediate rapport with the adulating crowds below.

But is there something more to the Lok Sabha elections 2019?

While Modi kept his relentless attack on the Gandhi family and the Nehru-Congress legacy throughout the marathon electoral campaign and did not lose an opportunity to proclaim his commitment to the poor, there is much consistency across his stance in the 2014 elections and in the present: India was conquered time and again, and it is time to demonstrate the greatness of India.

This call for nationalism, laced with powerful symbolisms, went hand in hand with a note to weed out the enemy. Who such an enemy was often left diffused, leaving local discourse to mark its own target or targets.

There was much less emphasis in his speeches this time around on egalitarian and inclusive nationalism, except in an adversarial sense to target the opposition or to sing paeans for his social sector initiatives. He projected himself as the bearer of the authentic spirit of India.

All the way, he selectively co-opted elements from Swami Vivekananda, Vinayak Damodar Savarkar and the Rashtriya Swayamsevak Sangh ideology, as he considered appropriate, rather than subscribing to their position wholly.

At the same time, he was undercutting Brahmanical superiority. The presence of the RSS in this election was much muted, and those of its cadre who were active appeared to be the party workers of BJP.

In the 2014 elections, the BJP secured a large number of votes from backward classes. Modi was obviously aware of it. He continues to remain their icon. There was much invocation of Modi as the avatar purush that was dished out across the rallies he addressed, dipping deep into the folk traditions of the exemplar and the wise ruler. The gods that were invoked in the course of this election were Krishna and Shiva and there was little focus on Ram Mandir – although it found an important mention in the BJP manifesto. In one stroke, Modi had dispensed with the earlier war-cry that had brought the BJP to power, as he bid goodbye to the legacy of earlier stalwarts such as L.K. Advani. Modi’s ally in this election was Yogi Adityanath, the chief minister of Uttar Pradesh and the mahant of the Goraknath temple, a cult at the confluence of multiple devotional and ascetic traditions.

Taking a leaf from Savarkar’s version of Hindutva, Modi’s invocation of nationalism demarcated those wholly within its bond, from its suspect others such as Muslims and Christians.

While Modi was a little circumspect in drawing these boundaries, others threw all caution to the wind, particularly acolytes such as Amit Shah and Yogi Adityanath.

For Amit Shah, the candidature of Pragya Thakur from Bhopal – someone charged for fomenting communal strife against Muslims – even became the pursuit of ‘satyagraha’, the weapon that Mahatma Gandhi designed for the pursuit of truth with reciprocity as its built-in component.

Modi’s marshalling of national security, immediately directed against Pakistan as the breeding den of terrorism, while employing an issue which several others before him in India and elsewhere have deployed to rally popular support, pushed his cohorts to not miss an opportunity to point out that such an enemy is within India.

India’s complex political system is caught in too many checks and balances to take it on upfront. There are the institutional regulators such as the parliamentary opposition, the bicameral parliament, the judiciary, the federal distribution of powers and so on.

At the level of political process, there is a complex system of political parties; civil, caste, ethnic and religious organisations; a deeply self-righteous media, both electronic and print, in English as well as other regional languages. The armed forces, although professional, have shown time and again, that they do not lack political awareness.

While it would be difficult for Modi to bypass or set aside these institutions, he can employ levers of sensibilities conducive to his idea of nationalism, alongside power and patronage, to reinforce a political culture that these institutions would defer to. In the non-political arena, he can easily employ the same forces that brought him to power to undertake surveillance and even to safeguard order.

India always had an economy far too caught in regulatory norms, hierarchies, patronage and caste ties. We cannot be oblivious to such linkages, in spite of some valiant trade union struggles and peasant assertions reaching out to the wider arena.

Much of it is going to be reoriented in the days to come in the name of strengthening national economy and growth. There would always be some much-trumped up schemes such as MNREGA, Awas Yojanas, Kisan programmes, and insurance plans which would be deployed both for propaganda purposes as well as for cooption.

In Modi, the Indian middle class has found the hero they always yearned for.

The opposition in India either put together a grand litany of welfare measures, or lurid slogans drawn from liberal philosophy – anti-authoritarianism, rule of law, public institutions, civil liberties and pluralism – to counter Modi and lure the electorate.

Some listened to them, but the prevailing part that eventually makes all the difference rallied behind. Modi. Probably the time has come to rethink the foundations of a democratic dispensation in a large, deeply diverse post-colonial society, where the future is deeply caught in the invocation of the past.

Valerian Rodrigues is a political scientist, professor and author.