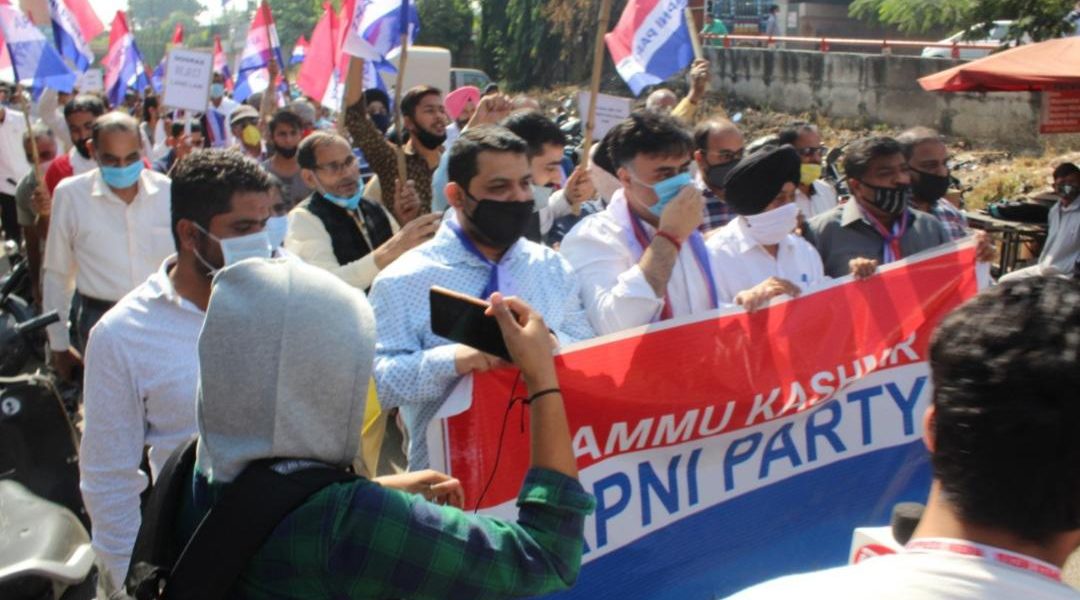 Leaders of the Jammu and Kashmir Apni Party. Photo: Twitter/@Apnipartyonline

New Delhi: The Jammu and Kashmir Apni Party, formed in March 2020 with the blessings of the Union government, has now found itself at the centre of a controversy as one of its most important leaders is accused of benefitting in the Rs 25,000 crore Roshni Act land encroachment scam.

According to a list of beneficiaries in the Samba region published by the Union Territory administration, the party’s spokesperson Bikram Malhotra and his brother Aditya Malhotra had received 17 kanals of land each in Palth village. The list mentions him as “son of ex-chairman legislative council”, referring to his father Amrit Malhotra, who was elected as the chairman of the legislative council in 2015 as a Congress leader.

The Apni Party was constituted earlier this year under the leadership of former Jammu and Kashmir Peoples Democratic Party leader Altaf Bukhari, along with 20 other former MLAs from the Congress, National Conference and PDP. It was expected to advance the Centre’s development narrative in the valley and advocate for the changes made on August 5, 2019 to Jammu and Kashmir’s constitutional status.

However, with Malhotra’s name emerging in the list, the Apni Party is already eyeing a rough start to the process. Several prominent officials and politicians cutting across parties have been named by the Vigilance Commission in the investigations related to irregularities in the implementation of the now-scrapped Jammu and Kashmir States Land (Vesting of Ownership to the Occupants) Act, also known as the Roshini Act.

Speaking to the Indian Express, Malhotra said, “We had bought agricultural land from someone over 20 years ago. While most part of it was his ownership land, the revenue department had entered khasra Girdawari in his name for a portion as he was growing agricultural produce on it. As had been the usual practice at that time, we bought the entire land, including the portion for which khasra Girdawari was entered in his name by the revenue department. When government came up with a scheme for vesting ownership rights of land to its occupants subject to payment of costs, we too applied for it.”

“It was an agricultural land and we are also using it for agricultural purposes. It was a government scheme at that time and we followed all the rules prescribed under it,” he added.

Other prominent names that were published in the new list of beneficiaries include businessman Sajjad Chaudhary, who allegedly got 20 kanals of land, and Mohammed Majid, a government employee who allegedly got 17 kanals of land. Businessmen Sudhir Khurana and Sahil Mahajan are also named in the list. In another Jammu list, names of former DIG Khalid Durani, ex-forest officers Sultan Ali, Qumar Ali, Lambardar Jamat Ali have also been named as alleged land encroachers.

The UT administration had earlier mentioned ex-PDP leader Haseeb Drabu and three of his relatives, and Congress treasurer K.K. Amla and four other Congress leaders, as alleged beneficiaries. On Tuesday, it also alleged that the residence of Omar and Farooq Abdullah was also built on encroached forest land, a charge the NC leaders denied vehemently.