With Use of Antiquated EVMs, Electoral Norms Being Violated in J&K Local Body Polls

Despite a 2013 Supreme Court order, Jammu and Kashmir is still scheduled to use a batch of older EVMs even as the model code of conduct is being flouted by various parties in the state.

Jammu: Jammu and Kashmir has a penchant for being in the news for the wrong reasons, and this time it’s the panchayat elections that have been marred by a gross violation of electoral norms.

The case surfaced after Sanjeev Sareen, an advocate at the revenue court, filed a Public Interest Litigation in the Jammu and Kashmir high court about various malpractices. He had earlier written to the Chief Electoral Officer in J&K, Shaleen Kabra, about the same..

The PIL has been approved by the high court.

“We live in a democracy and free and fair elections are our right. The Centre cannot go on rushing the election procedure and throwing all laws and rules in the wind,” Sareen said.

The official notification for the municipal elections came out on September 15 and the dates were announced on September 18, following which the model code of conduct was put into force.

But the Centre itself flouted the model code of conduct when it announced a hike in the salary of more than 30,000 Special Police Officers (SPOs) from September 26 on. This is despite the fact that the the model code of conduct clearly stipulates that no ministers and other authorities shall announce financial grants in any form, or promises thereof which may have the effect of influencing the voters in favour of the party in power.

Also read: In J&K Panchayat Polls, Real Issues of the People Have Taken a Back SeatAnother violation occurred when the CEO of J&K issued an advisory related to transfers of tehsildars on a large scale. When Sareen shone light on the matter in his press conference on September 29, the order was reverted. Another example of misconduct came to notice when election observers were appointed after the procedure of nomination and scrutiny had already been wrapped up.

But the biggest malpractice of all so far has been the (mis)use of EVMs. As per the Election Commission of India, M1 EVMs were to be discarded as per the standard operating procedure laid down by ECI. But J&K CEO seems to be oblivious of these suggestive procedures and is adamant on going ahead with using the invalidated M1 EVMs. 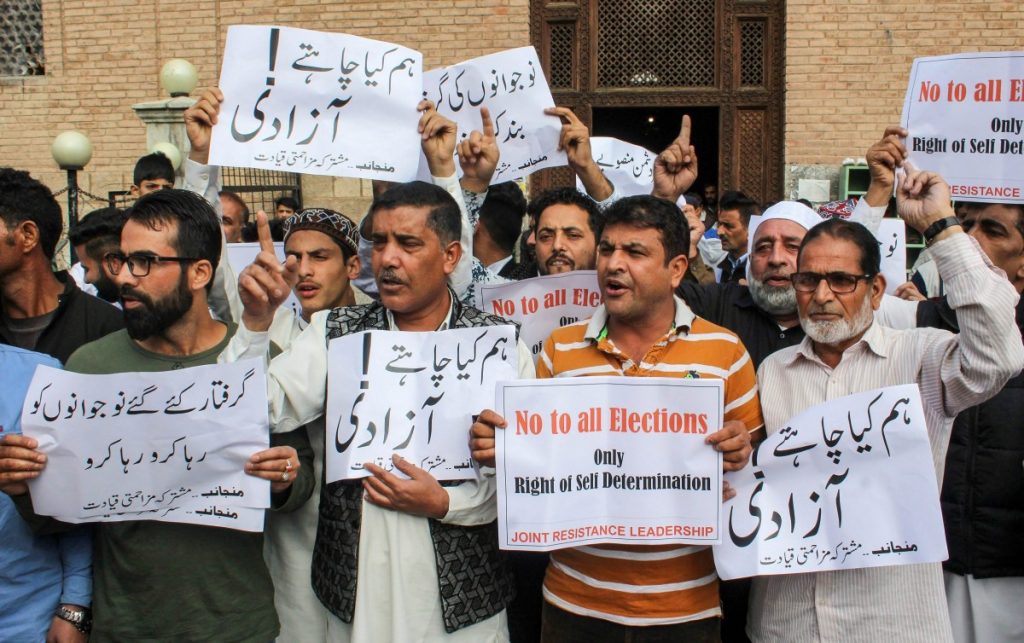 Joint Hurriyat leaders and supporters calling for the boycott of the upcoming municipal elections, in Srinagar on October 5, 2018. Credit: PTI

Pre-2006 era EVMs are known as ‘M1 EVMs’, while EVMs manufactured between 2006 to 2010 are called ‘M2 EVMs’. Technological changes were made in EVMs in 2001 and machines were further upgraded in 2006. The next generation of EVMs, produced since 2013 are known as ‘M3 EVMs’. The latest addition to the Indian EVM is the Voter Verifiable Paper Audit Trail (VVPAT), which was introduced in 2013, as an additional measure of transparency in the EVM-based voting system. The task of developing VVPAT model was assigned by the EC to EVM manufacturers under the expert guidance of the Technical Expert Committee (TEC). These upgradation to the EVMs were done to secure and make it tamper proof. These latest security features have been an indispensable requirement for free and fair elections and for safeguarding the integrity of the voting system. It also serves to strengthen the confidence of voters.

After the BJP-PDP alliance ended, Governor’s rule was implemented in the state with direct control of Central government in its functioning. As such, it is interesting to note that the ex-governor N.N Vohra passed an ordinance to use EVMs in the municipal elections to be conducted in October 2018. But despite the Supreme Court Order on October 8, 2013, and guidelines by ECI, M1 machines are being used.

Moreover, sources reveal that no videography was done during filing of nominations or scrutiny as per the norms. A lottery for independent candidates who had the same choice of symbols was conducted before the withdrawal dates and candidates were not allowed to challenge the election form of other candidates even though there is a provision to do so.

With so many discrepancies in the electoral process and regional parties already boycotting municipal elections, this seems to be an excellent cakewalk for the current political dispensation to gain a foothold in a patchy electoral prospect.