In the Battle to Annihilate Caste, a War of Words Is Pivotal

Movements like the Bhim Army are easily cast into narratives of Maoism, Naxalism and terrorism by the government. However, the Ambedkarite movement is also building its own counter-narrative against Brahmanical oppression. 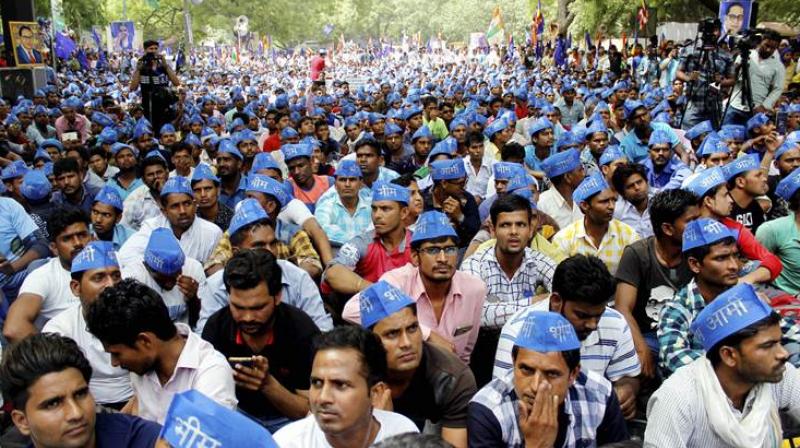 The ongoing caste conflict and violence in Saharanpur is unfortunately repeating the all too familiar ugliness of caste hierarchy embedded in Brahminism. Although we continue to work through invisible mechanisms of caste everyday, even in the 21st century, it only shows its ugly head when there are attempts to annihilate the monster.

The growing incidents of violence against Dalits needs to be understood as a reaction to the growing attempts of annihilating caste. Whenever there is a step towards equality, however small that maybe, it is met with unjustifiable retaliation. It can be as simple as using a horse for a wedding or saving enough money to make one’s own house or accessing (higher) education – the repercussions of transcending caste boundaries are tremendous. Although these retaliations enjoy moral legitimacy from Brahminical caste and gender norms, they are in absolute violation of egalitarian sensibilities and constitutional norms.

Therefore, how does caste violence gain legitimacy within the modern discourse enshrined in the constitution? What are the mechanisms apart from the usual savarna (upper caste) nexus in the state machinery which allows for retaliatory violence against annihilating caste to continue unabated? With the case of Bhim Army Ekta Mission, I hope to explicate the apparatus of such a discursive war on the foot soldiers of constitutional equality.

Throughout India, Ambedkarite movements have been attempting to make constitutional promises a reality since the 1950s – Dalit Panthers being the most prominent one in the 1970s. To ask what has happened to all those movements of the past is a moot question. The events that are unfolding in UP right now, can allow us to understand how such movements are dealt locally by the immediate communities around, as well as nationally in the state’s discourse. What began few years back as a localised effort, by the Chandreshekhar-led Bhim army, with the aim to challenge caste hierarchies in the villages of Saharanpur district, changed very quickly as BJP returned back to power with a Thakur chief minister, Adityanath. With the switch in power dynamics from Mulayam and Mayawati for the past 15 years to Adityanath, upper-caste groups regained their lost access to state power, to go along with their social and economic advantages. Since Ambedkar Jayanti on April 14, upper-caste groups led by BJP leaders have been attempting to assert dominance on Muslim and Dalit communities in separate incidents – leading to more than 25 Dalit households being torched and the death of at least one Dalit man and one Thakur man. The underlying message? Dalit and Muslim assertion needs to be quelled – especially assertive movements like the Bhim Army, which are not afraid to respond with violence. The police have arrested members from both Dalit and Thakur communities in a bid to stop further violence, but has been largely unsuccessful in addressing the law and order situation. There are plans to book Chandrashekhar – who has escaped for the time being ­– under the National Security Act.

The first, automatic discursive step is to link the Dalit movement with Maoism and label them as Naxals – which Saharanpur’s SSP Subhash Chandra Dubey did almost as a reflex action. Jignesh Mevani, who led the Dalit movement in Una last year, puts it bluntly – if the state needs to target Dalits, it labels them as Naxals, and if it is Muslims then terrorists. Both of these abuses are prominent in the larger discourse of ‘anti-nationalism’. In past few years, anti-nationalism has become the most easily available and readymade discourse, evoked to counter any criticism directed towards the government. Be it questioning demonetisation or AFSPA or caste or communal violence in the country. The worst sufferers of the Naxal discourse have been adivasis and Dalits, and organisations like the Kabir Kala Manch, who are not even remotely connected to Maoism, gets booked by the police under such a planned targeting. Kabir Kala Manch, which was a group of young Dalit (and lower caste) women and men singing protest songs since the 2002 Gujarat riots, was hounded by the ‘Anti-Terrorism’ Squad of Maharashtra police under the draconian Unlawful Activities (Prevention) Act in 2011. Although their only form of dissent was through poetry and songs about caste and class oppression, it didn’t prevent the state from clubbing them with other armed protest movements. This kind of excess in stifling dissent has the same roots as the excessive violence unleashed on anti-caste movements. In both cases, the hierarchy needs to be maintained and even a minor dissent becomes a thorn in the flesh that needs to be immediately removed.

Thus, it was no surprise that the Bhim Army, which is not averse to the use of defensive force, would also be accused of having links with Maoism to allow the police to corner the leaders of the movement. However, the label of Naxalism has become so banal by now that its discursive power has started to relent. Moreover, the police couldn’t find any evidence of the Bhim Army using an arsenal (associated with the Naxal movement) in their village-level activities.

Hence, the narrative needed to be strengthened with new reinforcements to nip the budding movement. It is here that UP’s police and intelligence department have helped. In past few days, Times of India, which has “somehow” got hold of this confidential report by the intelligence department, is contributing to this new discourse. 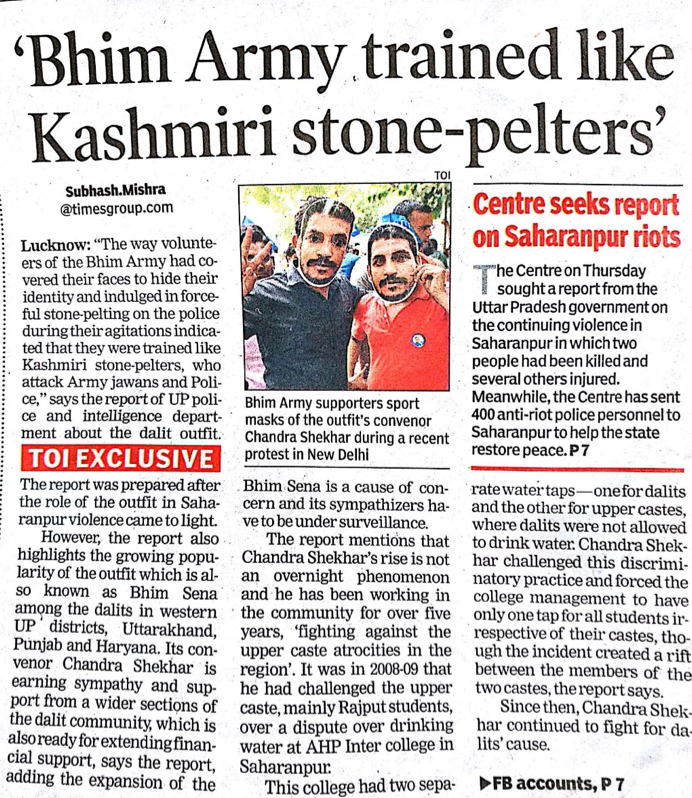 ‘Bhim Army trained like Kashmiri stone-pelters,’ claimed the headline on the first page on May 26, Lucknow edition. It compares the way Bhim Army volunteers cover their faces and throw stones at police to the way Kashmiris who attack the Indian army. Through such an analogy, the attempt is to discursively equate the so-called anti-national Kashmiris with the Dalits of Bhim Army. This looks like a new strategy to invert the sympathy that the Bhim Army has been gathering and instead direct emotions of nationalistic anger on them. In the recent past, India’s Kashmir policies have been failing even more spectacularly which has created a huge crisis in the Valley for which the only antidote has been brandishing all Kashmiri dissenters as terrorists. The discourses of Naxalism and Kashmiri terrorism have been established in popular mainland Indian imagination, leading to unreasonable anger brimming and spilling among the nationalistically bent. Thus, it has become quite easy to divert this excessive anger and target even localised dissents through associations of Naxalism or Kashmiri stone pelters, as with the case of Kabir Kala Manch or Bhim Army.

Adding to this, the headline of May 25, Lucknow edition of the Times of India claimed that it is actually BSP who is funding the activities of Bhim Army against the BJP government, and not the community – directly implicating Mayawati’s brother Anand Kumar in it. By this, the police wants to suggest that the Bhim Army is not the real voice of Dalits in Western UP. Instead, the BSP is only exploiting the situation for political mileage. The report directly accuses the Bhim Army of exploiting the feelings of injustice among the Dalit community and recommends strict action against its office bearers and demolishing its network.

The generation of such a powerful discourse against the Bhim Army may result in the organisation being dismantled, like other such movements of the past. However, there is a strong counter-discourse emerging from the Ambedkarites and associated networks of solidarity to challenge the Brahminisation of the state. Mevani is among the key Dalit leaders who has associated himself with Bhim Army to a certain extent, and has voiced support and momentum from his Chalo Una, Chalo Udupi and Chalo Trivandrum campaigns. He has come out strongly against the Manuwadi (Brahmanical) government of the BJP, both in the Centre as well as in many states. He argues that for Hindutva, Dalits are ideologically integral to the majoritarian Hindu fold which is part of the rhetoric during elections, but in practice caste Hindus can never behave equally within themselves how much ever they imagine a flat society. The graded hierarchy, as Ambedkar conceptualised, is so deeply ingrained in the everyday life of South Asians that it keeps manifesting everywhere, especially when the existing hierarchy gets defied. For this reason, Ambedkar realised that the ‘annihilation of caste’ couldn’t happen within the Hindu fold, and therefore decided to leave the religion at the same time he penned down his thoughts on annihilating caste in 1935. 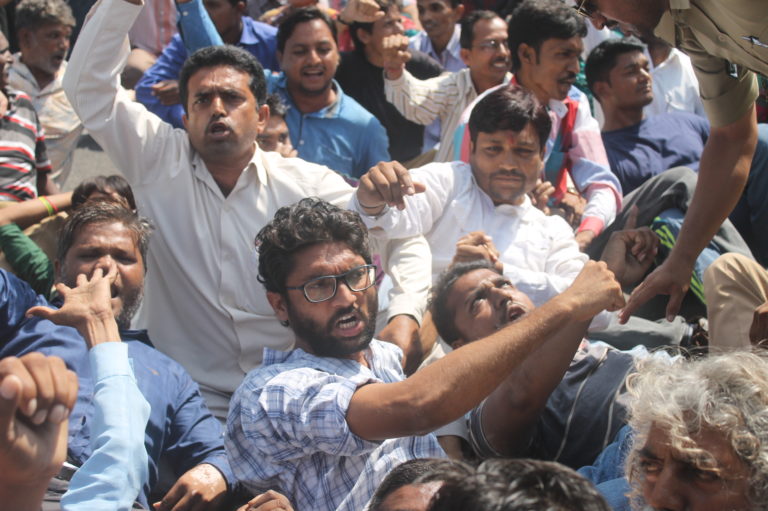 Protestors trying to save Jignesh Mevani and Hiten Makwana from being injured while being pulled by cops, Makwana in white check shirt. Picture credit: Damayantee Dhar

The use of ‘Raavan’ as a title by Chandrashekhar is another such discursive strategy to strongly assert the difference of Dalit identity from the Hindutva ideal of ‘Ram Raj’. In associating with the ‘antagonist’ of the Hindu epic Ramayana, a move that has been done assertively by the Dravidian movement since the 1950s, Chandrashekhar is attempting bahujan solidarity. It is not new for subaltern movements to challenge the dominant narratives of Indian epics by reclaiming figures of Surpanakha, Ravana, Mahishasura and Mahabali among others.

Such attempts may not match up to the widely permeated narratives of Naxalism and terrorism. Nonetheless it’s a strategy of building a counter-narrative. The rally at Jantar Mantar in Delhi on May 21 was an extension of this counter-discursive strategy. The Bhim Army realised that if they don’t rise up to the national discourse, they can easily be decimated like the Kabir Kala Manch. With a huge turnout of more than 20,000 people at the rally, the Bhim Army was able to gather enough support to be noticed in the national arena.

However, the most powerful discursive tool with Dalit movements to counter exclusions of caste system, continues to remain the provisions provided under the constitution, which directly challenges the graded hierarchy embedded in Brahminism. Ambedkar, as the chief architect of egalitarian norms in the constitution, provided the necessary tactic to fight for equality and justice for generations to come. Building on constitutional norms, caste-based reservation for SC, ST and OBCs in (public) education and politics has provided the grounds for the most emancipatory endeavours in the country. Thus, it is no surprise that reservations would incite the maximum hatred among the conservationists of the caste system and refuse it to be extended for women and minorities. Here it is the discourse of merit that attempts to undermine the affirmative action for disadvantaged caste-groups.

In this discursive war between the state and savarna politics on one hand and the Bhim Army (along with other Dalit movements) on the other hand, there is a strong possibility that the latter would succumb as has been experienced innumerable times. Therefore, not only it is important to explicate the discursive strategies that ironically allows a modern state to perpetuate Brahminism, it is equally important to build solidarities through counter-discourses for subaltern movements to survive. Counter-discourses will most definitely raise the stakes of this war, as we have seen how the invocation of Ravana and Mahishasura heckle feathers, but that remains the only hope to bring constitutional promises into reality by annihilating caste. Thus, the Bhim Army is in for the long haul in fighting Brahminism, both on the ground at the local level, as well as in the discourse at the national and global level.