An Insurgent Constitutionalism is Driving Popular Politics in India Today

Probably for the first time in the history of the republic, it is not jurists and lawyers who are interpreting the constitution. The street has taken their place. 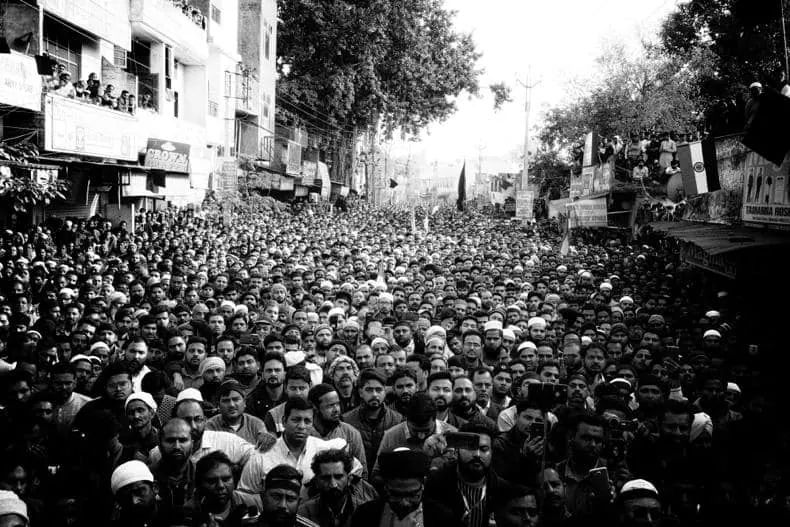 In his perceptive commentary, “Modi-Shah Duo Bring about a Fine Unintended Consequence” (The Wire, 19 January 2020), Badri Raina notes the efforts of the ruling regime at long-term systemic constitutional alterations in the nature of the state, which symbolises an epistemic shift in the life of the Republic from “one order of things” to another.

He points to the significance of protestors displaying the national flag and pictures of iconic “framers” such as Ambedkar, and as part of the protests reading out the Preamble to the constitution in the movement against the Citizenship (Amendment) Act – indeed as enactments to fight for the principles of the republic. One of his most perceptive observations is on the battle between what he says “the real and the legal” – evinced as an extreme case through assembly resolutions and a state government filing a suit against the Central government in the Supreme Court challenging the constitutionality of the CAA. Raina recalls the history of the JP movement, which in a situation of similar moral choice had given a call even to the state-apparatus to disobey official orders, even though these were legal. Significantly, he notes that the Supreme Court seems as much on test as those that are now in charge of the republic. In his words, this is a moment when justice comes to mean a concept in excess of mere jurisprudence.

I wish to take Raina’s observations further. If this is, as Raina says, an unprecedented situation, we may call it a unique constitutional moment in the life of the nation. In a long history of one hundred and sixty three years, this is the fifth such moment.

The first moment appeared in 1857 in the besieged city of Delhi when the rebellious soldiers along with representatives of the city formed the Court of Administration and had given the city a “constitution”, outlining the structure of governance and responsibilities of administration. The rebel soldiers were the first citizen-rulers – members of an incipient nation.

The second moment came in 1928-29, beginning with the report of the Nehru Committee (chaired by Motilal Nehru and with members such as Jawaharlal Nehru and Subhas Chandra Bose), the widespread demonstrations in 1928 against the Simon Commission, culminating in the declaration of Purna Swaraj by the Indian National Congress in 1929 in Lahore. Founding a republic was declared as the goal.

The third moment is known to all. It was the moment of founding the constitution of independent India (1946-49).

The fourth such moment came in the wake of the JP movement, with JP’s call of janata sarkar, his exhortation to people to claim the right of recall of legislators who had failed to serve the people, and what he called sampurna kranti. We may stretch the moment, if we like, up to the Sarkaria Commission whose report remained largely unimplemented. Now is the fifth such moment in the history of constitutional thinking – the second constitutional moment after the republic was born.

How did this happen? Probably for the first time in the history of the republic, it is not jurists and lawyers who are interpreting the constitution. The street has taken their place. Popular struggle on the streets, campuses, squares, towns and cities, tea shops, clubs, and assemblies, has found novel ways to bring back the question of justice – from displaying national flags, to reprints of the constitution with Ambedkar’s face on the cover page, to resurrecting memories of the long anti-colonial struggle.

In Kolkata, for instance, a procession symbolically ended at a place that reminds you of the time where some of the most memorable songs against the partition of Bengal (1905) were composed. Another such event recalled the tying of rakhi – the thread of brotherhood and sisterhood – by Hindus with Muslims in the same year near the Nakhoda mosque, or say the reading out of the Preamble on the steps of the Jama Masjid in Delhi amidst a thousands strong crowd. We can never know who coined or adopted the word ‘azadi’ as the spirit of the constitution – a word that does not mean only freedom, or autonomy of the soul or the self, but also justice, insaaf. We shall never know wherefrom sparks of fire fell on the already highly combustible material of popular feelings. Who decided such strategies that brought back the issue of the constitution as part of politics? We only know that some populist forces, which refused to leave the street as the site of politics and continued with their insistent claim that they were the people, made the nationwide resurgence of constitutional spirit as part of popular politics possible.

I shall give one more instance. In juristic thinking, Article 14 is the most cherished right – the right to equality. Yet popular protests assembled around the right to non-discrimination (Article 16). The legacy of Ambedkar returned through the militant path of the street clamouring for non-discrimination. This prised open the closure of Article 14 and the vexed issue of “minority protection”. The way the street has posed the question is not around the issue of minority protection, but dignity – or that inexhaustible word, justice.  I name this insurgent constitutionalism.

For long we had been thinking: Had popular constitutional thinking died? Has the legacy of popular constitutionalism faded away from memory? Part of the answer lies in the way we think of constitutional history in which the history of citizenship is embedded. On one hand, there is a Whig view that gives reasons as to why the constitution retains validity because it is a “living document” – living on the basis of an extended borderless body of principles of an unwritten constitution, and thus citizenship is a living institution; on the other hand, we have the critical view, namely, that continuous popular challenges and situations of illegalities and semi-legalities force the judicial-legislative discourse of the polity in keeping the question of citizenship as a referral point.

Yet, to point out the rival Whig and the critical versions is not enough. It is necessary to have a proper historical method to write the constitution’s biography. The Whiggish picture of the constitution of India, for instance, was largely evoked by the panoramic reports in contemporary newspapers during the drafting of the constitution, and the learned books by Granville Austin and others, which suggested a nationwide public political sphere that was pluralistic, representative, and responsive at the same time. Thus grew a mythology further strengthened by reports of jurists, legislators, and statesmen deliberating  on the constitutional future of the country. Nehru’s letters to the chief ministers are an instance of evoking this image.

But precisely at the same time, parallel and distinct from this, in various local meetings, local council deliberations, party assemblies, political rallies, and public hearings, groups of populations were experiencing constitutional politics in a different way, which did not take the meaning of the constitution too literally and often mixed illegal and semi-legal behaviour with popular constitutional thinking. Mixing reports and tracts with posters, handbills, and manifestos, and using in this way oral, visual, and print methods, constitutional thinking spread to wider audiences. Invariably, this process evoked and dissolved, in turn, the distinction between those included and those excluded from the official political nation.

Justice as the right to non-discrimination

Limits of space prevent me from describing as an instance of this process the history of the struggle for reservation of jobs and seats in public educational institutions and legislatures, which has been an issue of bloody contention in the postcolonial life of the Indian citizen. Kalpana Kannabiran, in a seminal work, has thrown light on a variety of sources of jurisprudence on five non-discrimination rights – disability rights, rights against caste-based discrimination, homeland rights of the indigenous people, rights against discrimination of minorities, and finally, resistance against sex-based discrimination. Significantly, therefore, we are not speaking here of any liberal right, but elaborating the right to non-discrimination. This is the source of popular constitutionalism, which does not offer any positive definition of justice, but asserts that justice begins with the demand that an injustice that has been committed has to end. This means that popular constitutionalism often does not stop or reduce or halt criticism. It is a kind of limitless critique. It is the imaginary – an instrument for those who fight, those who resist and refuse what is. Its use is in processes of conflict and confrontation; it does not have the onus of prescription. It thinks that its call is to reject injustice.

Only one answer, namely that the often decried populist forces in the states have made this possible or at least created the situation – which encouraged street protests to produce insurgent constitutional thinking. They are the principal antagonist against authoritarianism.

My last comment relates to this condition. In a perceptive analysis published last week in The Wire, Partha Chatterjee expresses concern that the movement may lose steam as has happened in many other countries in the last ten years, and that opposition disunity may prove disastrous. This is also a situation, as he points out, where the ruling party at the Centre may be defeated in assembly elections in state after state, but is able to retain central power with the help of a strong, centralist, nationalist narrative. The only way out of this conundrum is to emphasise the federal nature of both polity and politics. The strength of the Hindu nationalist narrative can be challenged only by an idea of a vibrant federal republic. The layering of the political space between the national, the provincial, and the local is real. Hence we must work towards the goal of a true federal republic.

Faultlines of the ‘federal’

In order to appreciate this point, several aspects of the situation need to be considered. I shall mention three among the more significant.

First, national parties have “national stakes”, which make their opposition to right wing nationalist forces weak, whereas local parties have greater stake in maintaining resilience in face of the new model of a general power. The national parties (such as the Congress and the Left) have thus less stake in federalising politics. They will crave for a “national model” of new power.

Third, a federal vision officially enshrined in the country’s constitution reflects only the liberal-bourgeois solution to the problem of how to tackle thousand mutinies. It is not reinforced by concerns of social justice and an overriding concern for the local. Such a federal system allows the UP government to kill protesters at will in as much as it allows the West Bengal government to lead the protest. In this sense, the quibble over “federation of states” or “union of states” is meaningless. The present constitutional moment calls for more radical imagination, which will allow us to think of not only steps like re-invigorating institutions like the Inter-State Council, but also more mandatory provisions such as the annulment of unpopular central legislation if such laws are rejected by say at least 50% of state legislators, providing for referendums, the legal validity of a united platform of sites of protests to be consulted by the administration and the judiciary in case of widespread protests (which is not exactly the now banal public interest litigation), of the right of the electorate to recall parliament and assembly members, and more such.

Insurgent constitutionalism is a moment that tells us of the rebirth of the political subject.