PDP spokesperson Waheed ur-Rahman Para says the government is not trying to encourage voters in south Kashmir, but to demoralise them. 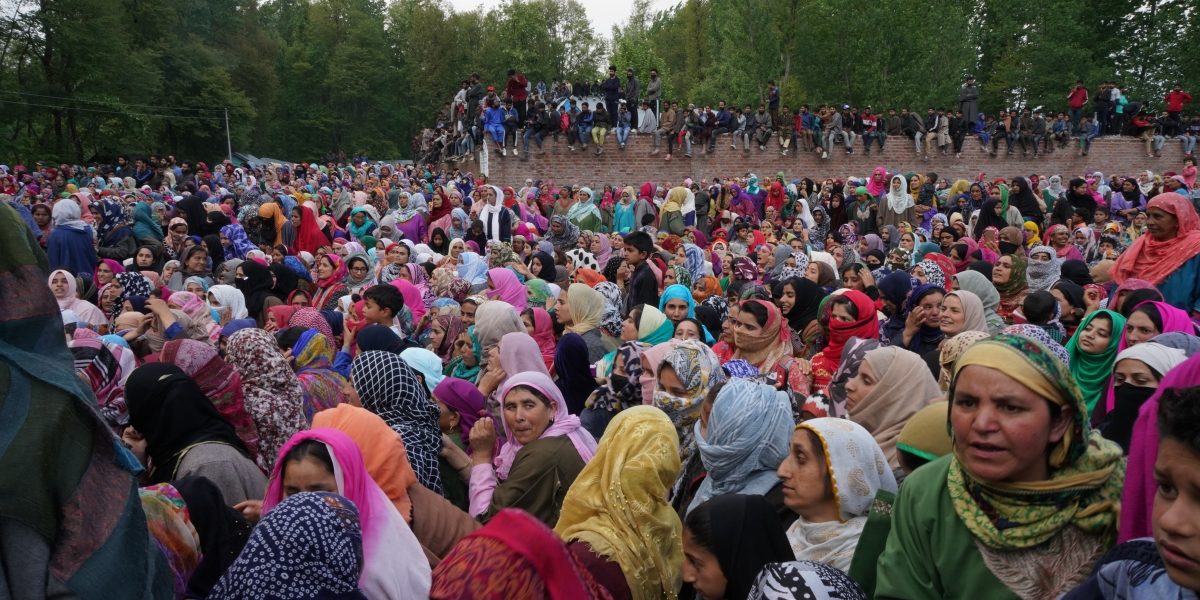 Mourners at the funeral of Lateef 'Tiger', on Friday May 3, in Dangerpora, Pulwama district. Credit: Avani Rai

Pulwama: On Friday, May 3, security forces engaged and killed three militants in a town in Shopian. One of them, Lateef ‘Tiger’, was from the neighbouring district of Pulwama, where his funeral drew thousands of mourners.

Both Pulwama and Shopian – part of the Anantnag parliamentary constituency in south Kashmir – were scheduled to vote just three days later.

Monday, May 6, will be the last of three phases of voting in the single constituency – an arrangement unprecedented in Indian elections. In the first two phases, voter turnout was as low as 10%, due to a surge in insurgent and counter-insurgency operations, an embittered population, and the threat of violence by militants, who ordered a boycott of the polls.

This is bad news for the People’s Democratic Party (PDP) and its president Mehbooba Mufti, who has won the Anantnag seat twice, and hopes to do so again in 2019.

In Pulwama town, PDP spokesperson Waheed ur-Rahman Para talked to The Wire that the government is no longer trying to encourage voters in south Kashmir, but to demoralise them. An edited testimony:

In the Kashmiri mahaul in which I grew up, if a cow died, the entire village gathered to ask about the loss. That still happens. So what happens when it is the child of a village, who everyone knows by name?

Recently, in my own village, four boys become militants. One was just killed. Yes, he was a militant, we have that political difference. But he was also my neighbour, who I’ve watched studying and playing cricket.

Yesterday’s funeral [of Lateef ‘Tiger’] – these funerals are now the political events of south Kashmir. Ten thousand people arrive spontaneously, without an invitation. This is the crowd we should be seeing at political rallies. Those 10,000 people are voters – but who among them is going to vote?

Their sentiments are on the boil, because for the first time, the government became more interested in anti-militant operations as elections got closer. Otherwise, if you want a smooth election, you don’t mobilise 10,000 people against participating. Automatically, an encounter is an anti-election event. It is a design to kill the democratic process. 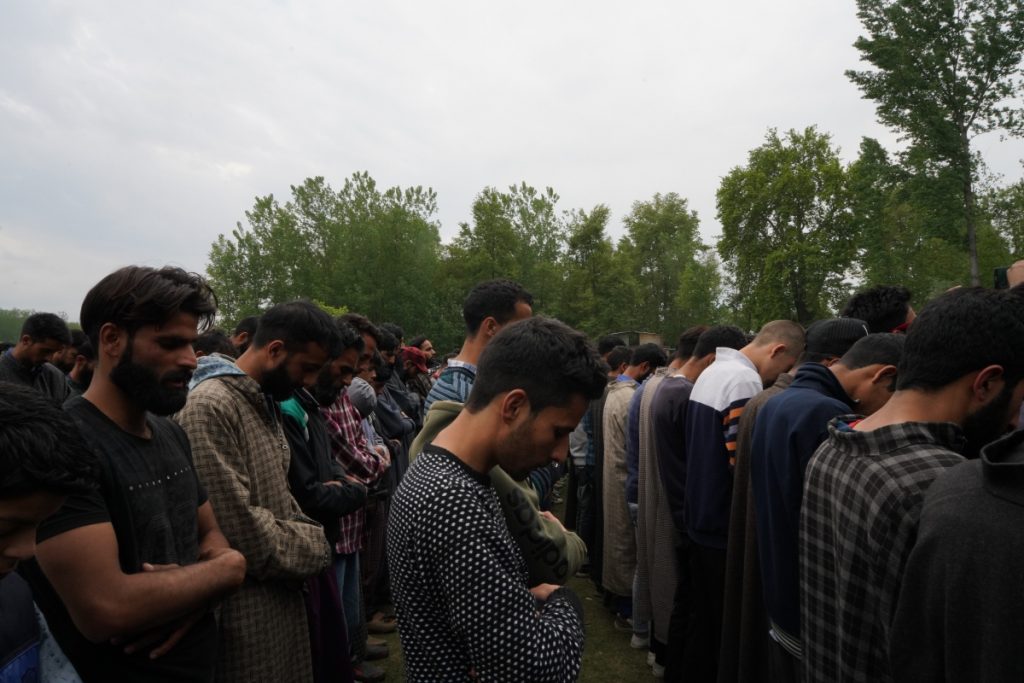 Mourners at the funeral of Lateef ‘Tiger’, on Friday May 3, in Dongarpora, Pulwama district. Credit: Avani Rai

Understand this, in 2016, Mehbooba-ji had a by-election. She was a member of parliament from Anantnag, but then became chief minister [in alliance with the state BJP]. For the month before that by-election, no operations took place in the entire region.

Before the Amarnath Yatra, for almost 40 days, they avoid staging operations in the area. It’s easy to do so.

Each of the 7,000 people at yesterday’s funeral [in Dongarpora, Pulwama] will stop their families from coming out. And the district where the operation happened [Shopian] will do the same.  We cannot ask for a celebration amid their mourning.

‘This election is not for the people here’

The moment the Election Commission of India announced a three-phase election in one constituency, it made voters vulnerable. It is an official warning, and that in itself has endangered a lot of people.

This has never occurred in 70 years of Indian democracy. Yet they did not consult political parties; they decided without even one pilot project. They were capable of holding polls in one phase. And if they were not capable – if they thought people will be killed – don’t do it. Hold it when the time is right.

Imagine you have one lakh voters in a constituency. Even if there are threats, ek lakh log ko tho nahi maar sakta koi (no one can kill one lakh people). But with the turn-out in select pockets, where a hundred people vote, that hundred can be identified.

What they have also done is to club polling booths. In every village in Pulwama, a school building exists, the resources exist – but they have clubbed booths so that there is one every four or five kilometres. Who will go four kilometres on foot, announcing in every village, ‘I have gone to cast my vote’?

Their logic is, if we send a polling team and presiding officer to each village, they won’t be safe. But if the polling staff are not safe, who is ensuring the safety of a voter? It’s the voter who has to be protected.

Instead, there is only arrogance.

What we are doing is enforcing democracy. They enforced the panchayat polls: participation was zero. The assembly election, which people desired, was delayed. Now they are enforcing parliamentary polls, and the participation is almost negligible. This election is not for the people here.

Earlier, when elections took place in Kashmir, if there was 70% turnout, India would celebrate – dekho ji, referendum ho gaya (look, a referendum happened). Today that turnout [in these districts] is between 2% and 10%.

A low turnout suits everyone except the people. A boycott in the PDP’s area makes the National Conference (NC) look relevant, it makes the Congress look relevant. Meanwhile, the Hurriyat says they have succeeded; militants say, we have succeeded. The army will celebrate the ‘smooth conduct of elections’. Even the BJP’s general secretary comes to Anantnag, saying ‘We are also winning’, hum bhi bees hazaar vote khareed sakte hai (we can also buy 20,000 votes).

The clubbing, the operations, the multi-phase polling, the security restrictions on candidates to stop them from campaigning – for the first time, the effort in south Kashmir is, turnout kaise kam kar sakte hai (how can we reduce the turnout)? 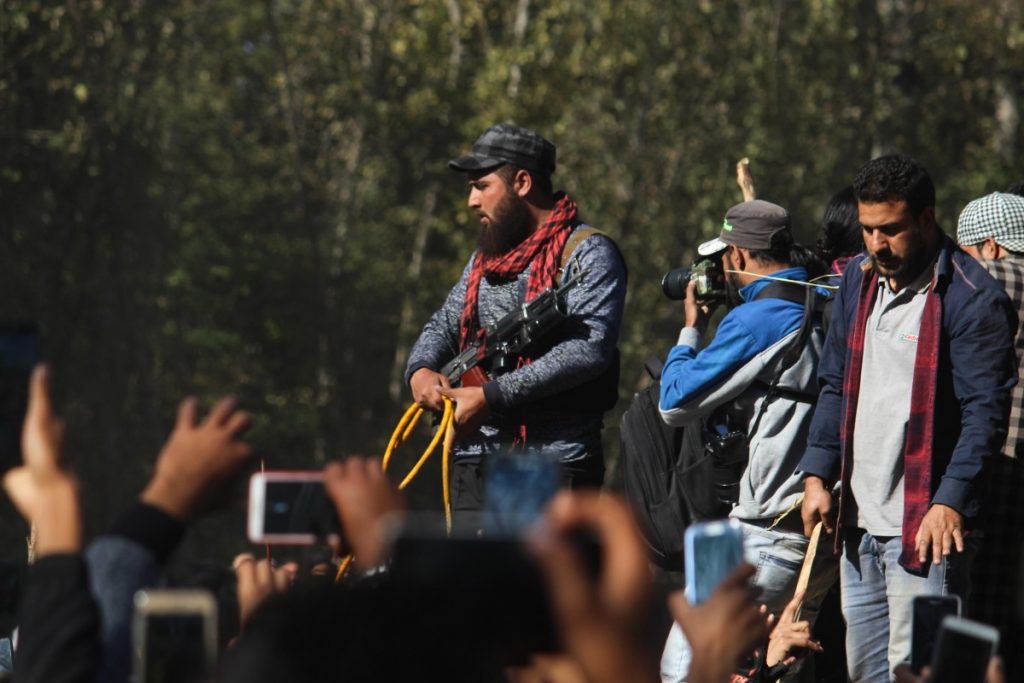 An armed fighter appears at the funeral of Subzar Sofi. Sofi was a Hizb-ul-Mujahideen rebel killed in an encounter with troops in Nowgam area of Srinagar district on October 24, 2018. More and more rebels openly attended the funerals of their comrades in 2018. Credit: Waseem Dar

Because Pulwama and Shopian are PDP areas. Most of our votes are from this belt. There are about six lakh voters here. If only 6,000 voters come out, it is easy to manipulate that mandate.

Jamaat-e-Islaami’s influence was also strongest here. Those people who attend militant funerals, who grieve there, they are the type who belong to the Jamaat cadre. Banning it has created a vacuum, and who will fill it? We can’t fill it, nor can the NC, the Congress or BJP – that whole space will move toward militancy, automatically.

Pulwama is not just about a suicide-bombing

At the same time, Pulwama has been used as a mobiliser in the rest of India’s election. The people of Pulwama are being tagged as terrorists, but the February 14 incident happened on NH1, far from the heart of the district.

This is the number one industrial estate of Jammu & Kashmir. Thousands of outsiders work here – it’s safe, nobody touches them. The best saffron in the world is from Pulwama, and it produces the best milk and apples. No one knows that.

Pulwama’s violence has been reported for political optics, to suit the BJP’s narrative. Yes, 50-60 militants have been active here, and many killings have taken place. But that’s not the only identity, and people don’t want to be part of a politics that is harming their identity.

The Hindu-Muslim debate in the rest of India has also hurt the democratic space. You can sell that idea in India, but you can’t sell a Hindu India in Muslim Kashmir. And people have started to see the security forces as a Hindu entity.

Earlier, Indian politicians never claimed the operations of security forces. The BJP claims operations – so people see the body as a Muslim, and the one who has killed him as a non-Muslim. They aren’t able to articulate it, but deep down this narrative is already setting in.

A lot of Kashmiri police officers also conduct encounters, but they do not celebrate them. They understand that sensitivity. But the people celebrating on TV, or in the BJP, are non-Muslims. Those who are mourning are Muslims.