After Fracas with Republic TV, AMU Students Booked for Sedition 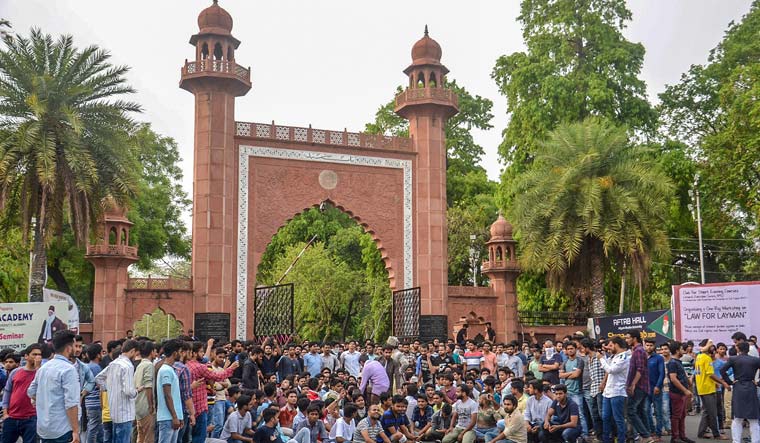 New Delhi: Fourteen students of the Aligarh Muslim University have been booked for offenses including sedition, after a confrontation on February 12 with a crew of Republic TV. An FIR was filed by the police based on a complaint by a Bharatiya Yuva Janata Morcha leader.

Dramatically differing accounts emerged from the campus. The university’s security officer said the journalists were filming on campus without permission. Student activists wrote on social media that the TV crew were aiming to instigate a reaction for the camera, and announced they were “standing in a university of terrorists“.

Meanwhile, Republic TV claimed its crew was ‘manhandled’ by students. A reporter denied allegations that they tried to provoke students, tweeting that they were on campus but “reporting on a story that had NOTHING to do with AMU”.

Ultimately, an FIR was filed by a right-wing student leader, claiming that ‘hundreds’ of students surrounded his vehicle, assaulted him and fired at him. The FIR also accuses the students of shouting pro-Pakistan and anti-India slogans.

According to Scroll.in, AMU’s students’ union said the FIR is “false and fabricated”. It said the Republic TV team and “some associates of RSS and BJP entered the campus with malafide intention”.

“When the AMU students challenged the said media reporters on its manner of questions and asked them to seek permission from relevant authorities, the reporters heckled the students, and the female reporter threatened to frame false sexual harassment charges against the students,” he said.

After the fracas, suspected members of BJP and its affiliates, allegedly armed with guns, started attacking the AMU students. Imtiaz said the students fought back in self-defence.

The university’s administration has also filed two complaints. According to the Indian Express, one complaint was filed against the journalists for entering the campus without permission. The second was made against ‘unidentified miscreants’ for arson and unlawful activities.

Aligarh district magistrate C.M. Singh told the Indian Express that the incident was an “internal matter” of the university. “We have asked the university officials to conduct an impartial inquiry and take action accordingly. Action will be taken against those found guilty of violating IPC sections,” he said.

Tensions have been running high at AMU this month, as the BYJM publicised a demand for a temple to built on campus, and the mayor of Agra denounced the minority institution as “a hub of terrorists”.

On Tuesday, the AMU Student Union was preparing for an on-campus political conference, to which AIMIM leader Asaduddin Owaisi was reportedly invited, against the objections of right-wing student groups. Sources on the AMU faculty said the Republic TV crew’s arrival coincided with a planned disruption by a pro-BJP group.