Caned for burning an effigy in a residential area, ABVP has resolved to continue its protest against Amnesty India. 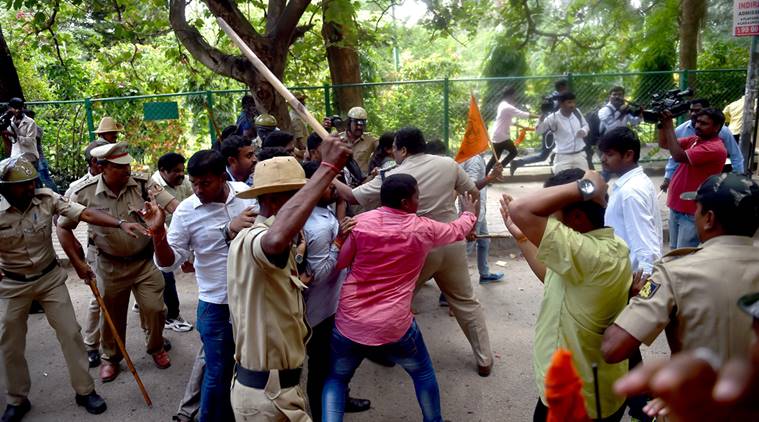 Bengaluru: Police baton charge ABVP activists during a protest against the Amnesty International India in Bengaluru on Friday. Credit: PTI

Bengaluru: Police today resorted to a ‘mild’ lathicharge to disperse ABVP activists staging a protest in front of the Amnesty International India office, demanding the arrest of those who allegedly raised ‘anti-India’ slogans at an Amnesty event.

Several ABVP activists were injured, with a girl student fainting in the commotion before she was rushed to a hospital, police said, adding that they detained many activists during the crackdown on the protest.

Additional commissioner of police, Bengaluru East, P. Harishekaran said police had to disperse protesters as they tried to burn an effigy in a residential area.

“With two bottles of petrol they tried to burn an effigy in front of Amnesty International here. We had, in prior, warned them against any effigy burning, as it is a residential area and so posed a security concern,” he said.

The protesters alleged that the police, under the DCP’s leadership, behaved in an ‘inhuman’ way and more than ten ABVP activists were injured in the lathicharge.

Calling their protest ‘peaceful’, ABVP national general secretary, Vinay Bidre, said, “We demanded that police vacate the Amnesty staff who were recording our protest from their office. We told police we won’t cause any harm to them. We did not try to barge into their premises and tried to burn Amnesty’s effigy, but police unnecessarily used force on us.”

He accused the Congress-led Karnataka government and police of protecting those involved in anti-national sloganeering.

Stating that ABVP would continue its protest, Bidre claimed, “We will intensify our protest across the state after today’s atrocity, we will show this government student power.”

As a precautionary step, police have asked Amnesty International India to keep its office in Bengaluru closed until the ABVP protest subsides, following which the organisation had asked its employees to work from other locations.

Amnesty International had on Saturday organised the event as part of a campaign to seek justice for ‘victims of human rights violations’ in Jammu and Kashmir, which took an ugly turn with heated exchanges and alleged raising of pro-Kashmir ‘Independence’ and anti-Army slogans.

ABVP activists had submitted a CD containing video recording of the event after filing a complaint with police, who have registered an FIR against Amnesty International.

IPC sections 142 (being a member of an unlawful assembly), 143 (whoever is a member of an unlawful assembly), 147 (rioting), 124A (sedition), 153A (promoting enmity between different groups on grounds of religion, race, place of birth, residence, language and doing acts prejudicial to maintenance of harmony) have been invoked against the organisation.