Amit Shah and the Toxic Consequences of 'Clean Chit' Jurisprudence

The Supreme Court has erred in refusing to examine why the CBI did not appeal the discharge of the BJP president in a case of triple murder – the encounter killings of Kauser Bi, her husband Sohrabuddin and his associate Tulsiram Prajapati. 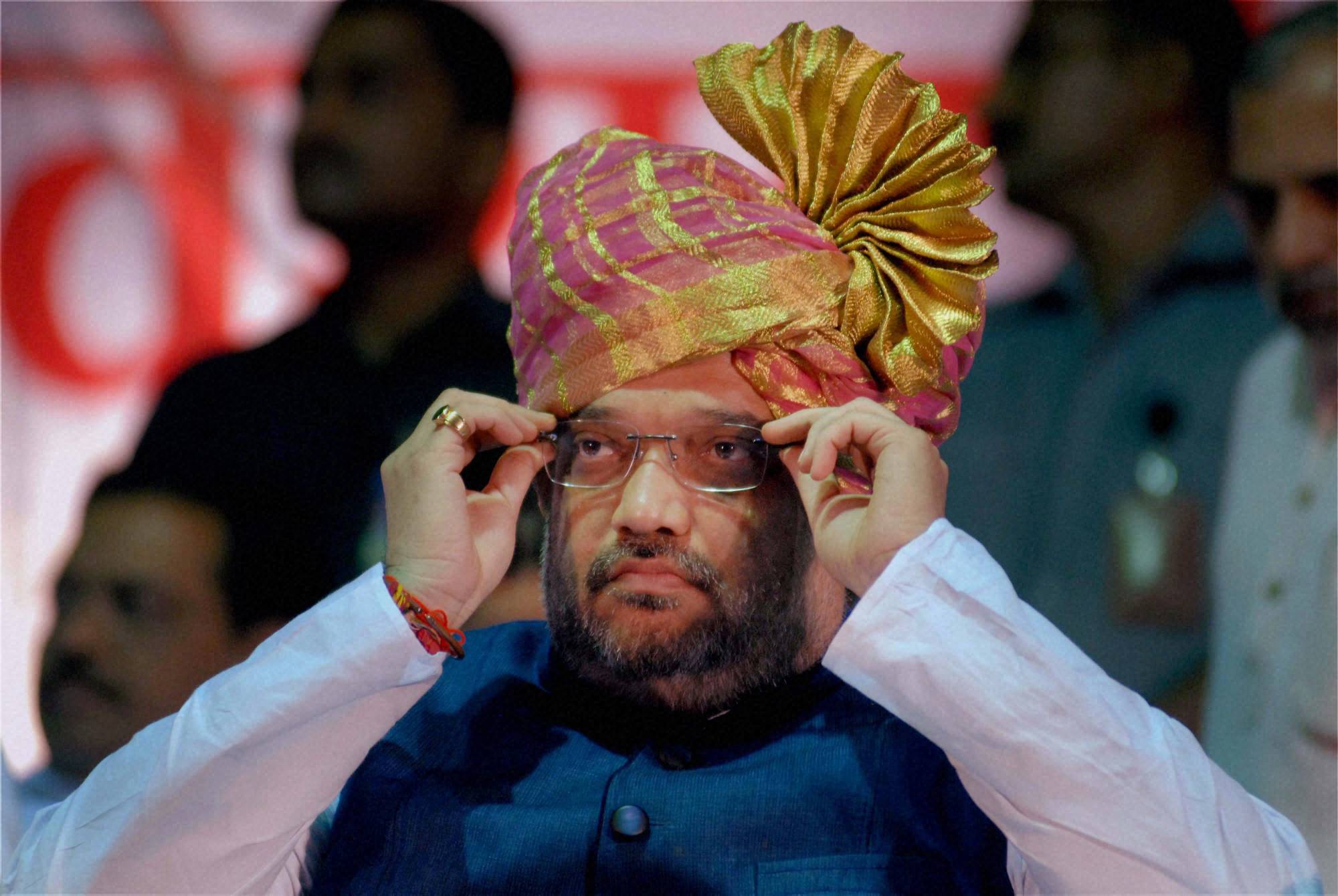 The reported comments of the judges who heard the petition filed in the public interest by a concerned citizen questioning the refusal of the Bombay high court to allow a petition questioning the discharge of Amit Shah in a murder case are a cause of grave concern. The apex court’s refusal to admit the petition virtually gives a ‘clean chit’ to the Bharatiya Janata Party president. As one commentator remarked, the announcement of the resignation of Gujarat chief minister Anandiben Patel came after the rejection of this petition was announced, as if to affirm the importance of Shah to the ruling party. But whatever be his importance for the BJP, should that matter to the Supreme Court?

“Clean chit” jurisprudence is here to stay; it requires no due process of law, and it requires no trial to ascertain the truth of allegations against the accused. It first came to prominence when the special investigation team appointed by the Supreme Court in the 2002 riot cases said they saw no “larger conspiracy” in the killings. This was the “clean chit” that Narendra Modi, who was chief minister at the time, desperately desired. There was no trial, no allegations brought, just an investigator’s report. The jurisprudence of the “clean chit” now comes full circle with the refusal of the Supreme Court to allow Harsh Mander to raise the issue of the discharge of Amit Shah in the Sohrabuddin-Kauser Bi-Tulsiram Prajapati murder case after the CBI failed to file a revision against Shah’s discharge by the sessions court and after Sohrabuddin’s brother too withdrew his case. The discharge itself came after one judge was transferred and one died; the third judge who was brought in delivered his judgment within a few days of taking charge of the case. It was the refusal of the Bombay high court to allow a public interest litigant to question the discharge that was challenged in the Supreme Court.

Harsh Mander’s petition questioning Shah’s discharge in a triple murder case was dismissed by the Supreme Court primarily on the ground that the petitioner himself was in no way an “affected person”. The gates of the Supreme Curt have thereby been closed to any questioning of Shah’s discharge. This is how the jurisprudence of the ‘clean chit’ works.

Criminal law knows no clean chit other than an acquittal following a trial. Once the process of criminal law has been set in motion and once an investigation is complete, there has to be an acquittal or a conviction. It is true that charges can be quashed at the instance of the accused, but in this case, Amit Shah did not ask for quashing – realising probably that there could be no quashing in a triple murder case. The other way out was to obtain a discharge so that the case does not go to trial at all. Which in turn means the sessions judge comes to the conclusion – without recording evidence – that there was no case against the accused at all from the very inception.

It must be said that the chargesheet was filed after intensive investigation, and after putting on record the metadata of Amit Shah’s phone conversations with the police officers who had come to be known as the “encounter team” of the Gujarat Anti Terrorist Squad. Every terrorist who was apprehended and liquidated had allegedly come to Gujarat come to kill the chief minister, and the ATS was charged with the duty of apprehending terrorists. This was the justification offered then and to this date in the case of Ishrat Jahan and the others who were killed along with her. These calls were made by police officers of the ATS to the then home minister Amit Shah at or about the time when the encounters were taking place, or right before and after.

Be that as it may, Rubabuddin (Sohrabuddin’s brother) did find the courage to file a revision application in the high court, which he later withdrew on the ground of alleged ill-health. He later gave an interview to a TV channel stating that he feared for his life and that of his family. Counsel for Rubabudin had submitted a sealed envelop to the judge pointing out that Rubabuddin appeared to be in fear and his statement of ill-health should not be taken at face value. A request was made to deal with the legality of the discharge by taking suo motu cognisance of the illegal order.

What was the duty of the high court judge at that stage? She perhaps could not have prevented Rubabuddin from withdrawing altogether but she had options. She could have assured him of witness protection; she could also have proceeded with the case suo motu, in the interest of justice, to examine the validity of the much criticised discharge in a triple murder case. She did neither.

The big questions to be asked are:

All the encounter specialists are out on bail, many have been rehabilitated and promoted.

There is no answer to the question of why the CBI did not challenge Shah’s discharge.

It is in these circumstances that Harsh Mander filed an application in the high court under Section 482 of the Criminal Procedure Code, stating that he was doing so in public interest since the CBI had failed in its duty to file a revision application questioning the discharge.

The concept of “locus standi” is unknown to criminal law, since anyone can lodge information of the commission of a crime; it does not have to be an “affected person”, and if that be the case, why was Mander’s case thrown out at the threshold, stating that he did not have the locus to challenge the order? Perhaps, the answer lies in the observations made by the judge of the high court that he was after all, a member of the National Advisory Council, implying thereby that he had a political motive in challenging the order. Apart for the fact that he stated that his move was to set the law in motion having regard to the failure of the CBI to question the discharge, we see politicians filing cases all the time against each other. Subramanian Swamy is a regular court bird and is found almost every day in court as a litigant and not as a lawyer. The now famous 2G judgment was delivered by the Supreme Court at his instance. He has filed complaints against Sonia Gandhi and Rahul Gandhi in the National Herald case, and he was not an “affected person”.

Whatever be the reason for the high court to have done what it did, the Supreme Court made matters even worse. The question that seems to have been posed was: ‘How long can you keep the sword of criminal law hanging over a person’s head? There must be closure sometime.’ Concerns like this, coming from a court that keeps litigation alive for decades, holds no water.

There are two fundamental questions here:

The petition was filed in response to the failure of the CBI to do its duty; the petition was maintainable, by any consideration of law as we know it.

The only way the law can operate against a person in power is when the person is first asked to resign before the proceedings can be commenced. Being in office enables control of subordinates, files, papers, documents and proof. It weakens the ability of law enforcement agencies to act independently, in accordance with the law. Indeed, far from resigning or remaining suspended, many of the police officers accused of being party to illegal encounters have been rewarded with promotions. Similarly, Amit Shah went from strength to strength, becoming president of the party which brought the then chief minister to become the prime minister. Under the circumstances, the CBI’s decision to not appeal Shah’s discharge could never have been independent and impartial.

While the collapse of moral will on the part of politicians can be understood, a similar collapse on the part of the court cannot be understood except in the context that constitutional justice requires as a pre-condition political justice, i.e., that an accused person occupying a position of administrative or political authority must step aside in order to allow the law to take its course. This is the lesson to be learnt from the hearing in the Supreme Court leading to the “clean chit” given to Amit Shah.

Yet, a Bob Dylan, sang, “the answer my friend is blowing in the wind”. While the files of the CBI may be protected from disclosure under the Right to Information Act, they are not so protected against an order of the court demanding production of all relevant papers in the interest of law enforcement. Additionally, an application can be made to the Central Information Commission (CIC) for disclosure of the files if the information sought relates to the violation of human rights. In this case, it clearly does relate to violation of human rights and an application would be in order.

Notwithstanding the Supreme Court’s decision, we may not have seen the last of this controversy. It is still possible for a public spirited citizen to apply to the CIC or go to court and demand production of the files relating to how the CBI decided not to file a revision against Shah’s discharge. If that decision is found contrary to law, the CBI can be directed to do their mandatory duty and file a revision. But are there judges willing to do that? This is a question I cannot answer for myself. Meanwhile all the police officers implicated in the case face trial. However, the political signal is clear by the grant of bail, their rehabilitation and promotion in the police forces. The state of Gujarat has the singular distinction of having as director general of police P. P. Pande, who is, till this date, an accused in the murder of Ishrat Jahan and others, and who was declared an absconder by a competent court of law .

Disclosure: Indira Jaising was Additional Solicitor General of India and in that capacity was representing the Union of India in the challenge by the CBI to the bail granted to Amit Shah. She also opposed bail on behalf of the CBI to several of the police officers accused of murder in the Sohrabuddin case.