The iconic leader's prescient observations about varna dharma and its threat to India's constitutional democracy are there for all to see today.

Note: This article was originally published on February 29, 2020 and is being republished on December 6, 2020, Ambedkar’s death anniversary.

While drafting India’s Constitution, Dr B.R. Ambedkar saw three types of threats to the democratic and egalitarian ethos that he wanted to infuse the nation with. Therefore, for him, the Constitution was not only a means to provide rights to the citizens, but was also meant to be a barrier to keep these threats from establishing any form of dictatorship.

When Ambedkar entered politics after he returned from his higher education in the US and UK, communist movements were sweeping the world. Communist parties of all countries believed that once the revolution succeeds, they could establish a proletariat dictatorship.

Since the proletariat refers to the working class, the poor and oppressed classes (castes in India) were mostly with the communist parties. Having come from an exploited caste – one treated as ‘untouchable’ – Ambedkar naturally should have been a communist. But because of their declared theory of proletariat dictatorship, he opposed communism in India.

Where did his opposition come from? He was by then a serious student of varna dharma, an India-specific, a violently exploitative system built on caste. He seems to have realised that the Indian working masses had been under the control of varna dharma for a long time. The varna dharma is all-pervasive in spiritual, social and political structures.

A significant speculative judgement he made was that since the Communist Party of India was also under the control of Brahmin leadership (P.C.Joshi, Dange and Randive were the main leaders at that time) they will be real dictators in the name of the proletariat. He seems to have understood that if communism succeeded, the exploited and oppressed castes would continue to be under Brahminic dictatorship.

Varna dharma as an exploitative ideological system was well established by Ambedkar’s time and all political formations were under the control of Brahmin intellectual forces, though all were not casteist. They were English educated intellectuals and leaders and did not fully grasp the seriousness of caste oppression. There was no intellectual force among the Shudra/Dalit/Adivasi masses then.

In modern times, any dictatorial system is operationalised by the educated elite. Naturally in India, Ambedkar saw that it would be mainly, even solely, Brahminic intellectuals who refuse to recognise caste-untouchability as a system of exploitation and oppression, who operationalise dictatorship. Thus, he felt, the so-called proletariat dictatorship of the communists would have also been a casteist dictatorship in a different form.

Those were the times in which Ambedkar got an opportunity to draft his anti-communist and anti-varna dharma Indian constitution that focused on welfare and social change. This was an accidental opportunity that he got at a critical time. Today, the oppressed Indian masses believe that his birth in that family and caste is because of divine providence, as he gave them what was unthinkable: the right to vote in a democracy.

The second type of dictatorship

He foresaw the danger of varna dharma dictatorship and avoided joining the Hindu Mahasabha or another political formation – the Indian National Congress – in his early years of political thought. Through the drafting of the Constitution and his politics, Ambedkar played a role in undercutting the possibility of varna dharma dictatorship getting established immediately after the British left.

For many years, political forces ignored him but are now realising the seriousness of this possibility when  the RSS/BJP – essentially a social and political network of dwijas (Brahmin, Bania and Ksatriyas) – came to power, first in 1999, and again since. When in power, this network has been trying to push India’s constitutional democracy into a crisis, particularly so after the victory in 2019.

The RSS/BJP wants to establish its dictatorship through democratic means, like Adolf Hitler in Germany. Mohan Bhagwat himself said that their notion of ‘nationalism’ may be linked with Nazism. They too understood that there is global discussion that India’s future under their rule could have parallels with Hitler’s Germany. 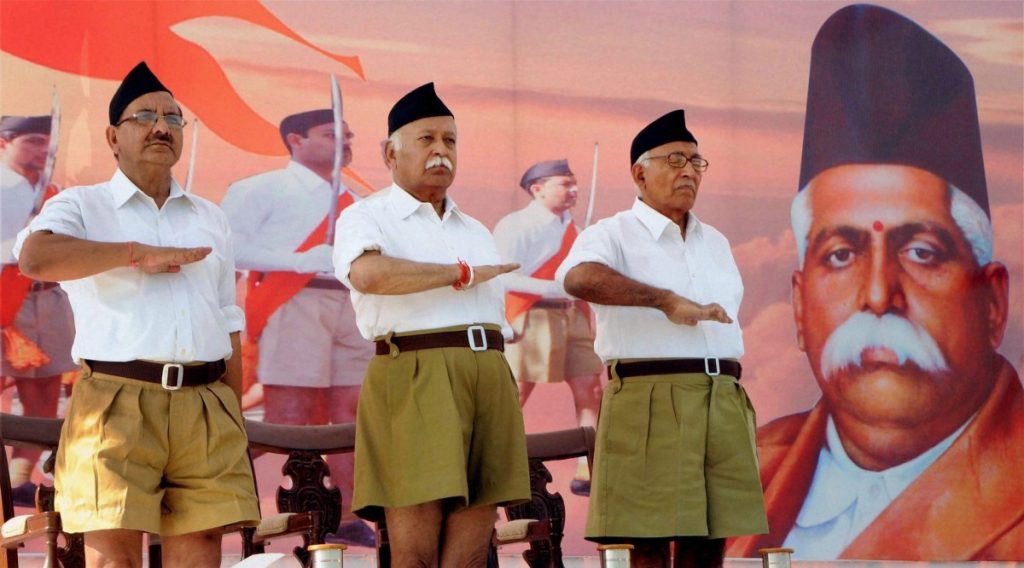 The credit for not varna dharma believers not gaining power in Delhi immediately after independence must go not only to Ambedkar but to Jawaharlal Nehru as well. Mahatma Gandhi gave enough scope for the establishment of varna dharma dictatorship, and knowingly or unknowingly Sardar Vallabhbhai Patel was willing to allow that. The only Brahmin who was not willing to allow the establishment of varna dharma was Nehru, who had a deeper understanding of that system. Ambedkar not only had an understanding, but also historical experience of its oppression and exploitation.

What is the nature and character of varna dharna dictatorship? It works at various layers, but is more dangerous than any other from of dictatorship. All ideological and political decisions in this form of dictatorship are taken at the top by a small group of people, who are defined as perpetually on the top by very birth. According to Bhanwar Meghwanshi, who just released his autobiographic narration entitled I Could Not Be Hindu: The Story of a Dalit in the RSS, the RSS policymaking body called Akhila Bharatiya Pratinidhi Sabha (ABPS) consists of 36 people. Twenty-six of these are Brahmins, 5 are Vaishyas, three Kshatriyas and two Shudras and nobody from the Scheduled Castes. The non-elected head of the organisation is the sarsanghchalak, generally a Brahmin. When the BJP is in power at Delhi, the actual power is controlled by the ABPS of RSS.

Three small communities, called the dwijas, have all spiritual, state and financial powers. The entire Shudra masses have to serve their interests and the other layers of society have to obey them. Otherwise, spiritual, financial and state power would be used to attack them.

These three communities, whom we may call dwija bhadralok, controlled everything, without dirtying their own hands. When Muslim rule was established in India and later the British raj, the dwijas lost only state power. Spiritual, social and financial power remained with them, during these reigns.

By establishing the Hindu Mahasabha and the Rashtriya Swayamsevak Sangh (RSS) in early 20th century, the dwija bhadralok wanted to establish a varna dharma dictatorship in a very subtle and modern way, once the British left.

In Ambedkar’s eyes, the Constitution would be a means to counter this ideology.

The third dictatorship Ambedkar foresaw was of the Islamic Caliphate kind. Ambedkar realised that after Partition, there was no scope of Indian Muslims coming to power and establishing a caliphate type of dictatorship. However, he studied this system very closely while writing a book on Pakistan. He, perhaps, foresaw that the kind of democracy he wanted to establish in India would not be sustainable in Islamic countries, particularly in Pakistan. This too proved correct by the end of 20th century.

It would not be correct to attribute Amebdkar’s knowledge, courage and confidence to tackle these forms of dictatorship solely to his US and British education. He made a special effort to learn, study, think, write and fight to counter these forces in India. Without the brilliant, bold and skillful Ambedkar, even Nehru would not have been able stop the varna dharma dictatorship and perhaps would even have been part of it if it had been established. His birth in that system would have allowed him to do that.

When Ambedkar became the chairman of the drafting committee of the Indian constitution, he proceeded with maximum care and caution. It survived for 70 years and improved the life of all sections of India, even the dwijas. Indian democracy survived in a region that had the proletarian dictatorship in China, Islamic dictatorship in Pakistan and Hindu varna dharmic dictatorship in Nepal. Now it appears that India too is at risk.

If this is not understood and the Constitution is not protected by people who fall outisde the RSS/BJP’s varna dharma ideology, its dictatorship will be reestablished and the nation will sink into medievalism. Once that happens, along with Muslims and Christians, the Shudras, Dalits and Adivasis – who have been historical victims of this ideology – will also suffer.