On the Amarnath Yatra, Faith and State Go Hand-in-Hand

A new report documents the ecological and social stresses caused by the rising number of pilgrims, but weakens its case by letting politics impinge on rigour 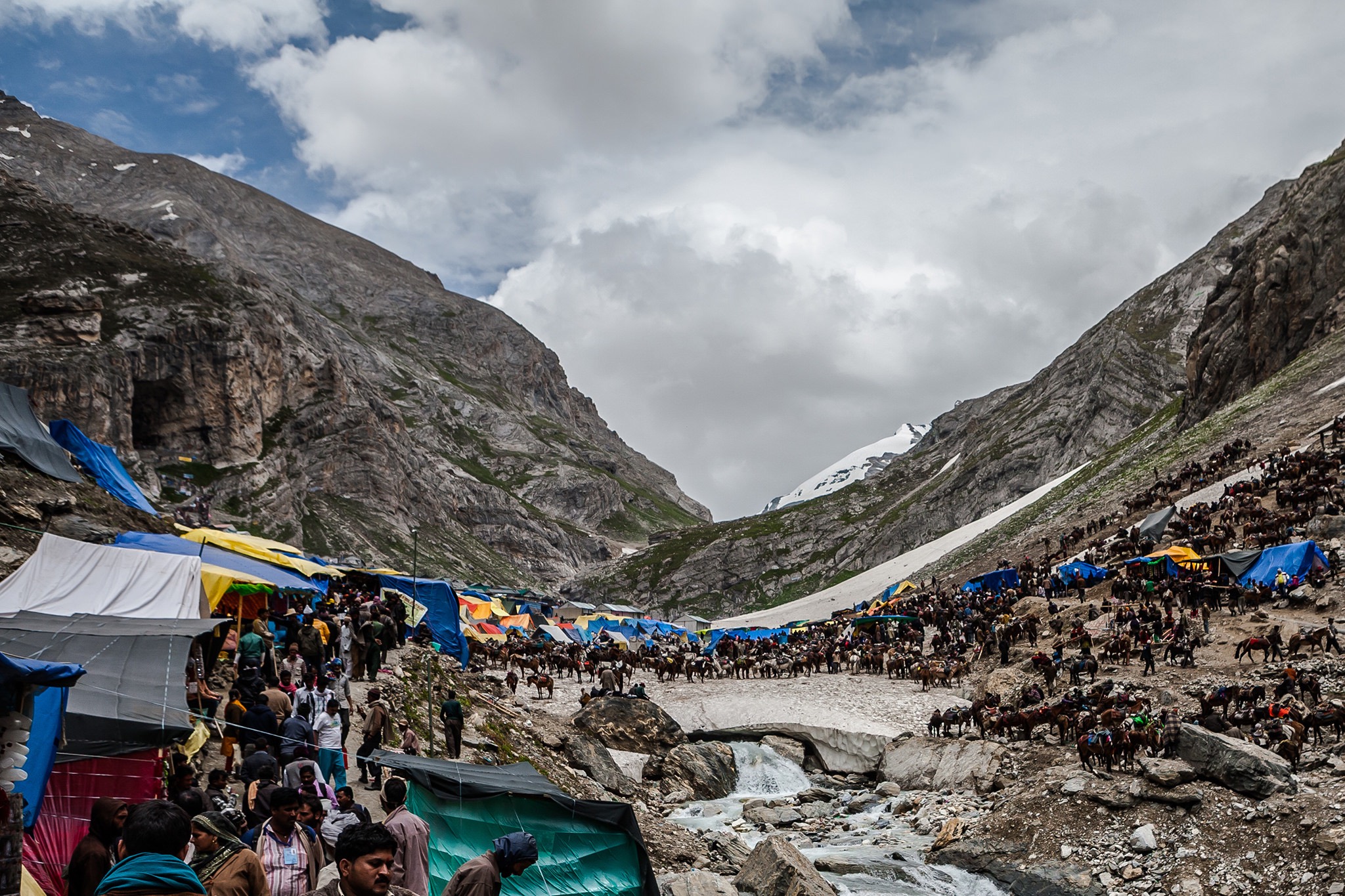 A view of the Amarnath yatra. Credit: Flickr/sandeepachetan CC 2.0

In his first week as chief minister, Yogi Adityanath announced a plan that seemed more to do with Tibet than Uttar Pradesh – he would build a ‘Kailash Bhawan’ from which pilgrims could set out on the yatra to Mount Kailash and the Mansarovar lake in the Tibetan Himalayas.

The significance of his plan was not hard to figure. It drew a line from the holy heights of Kailash to the less hallowed plains of western UP; the first step on the path to Shiva’s abode would no longer be taken in Lhasa or Kathmandu, but in Noida. 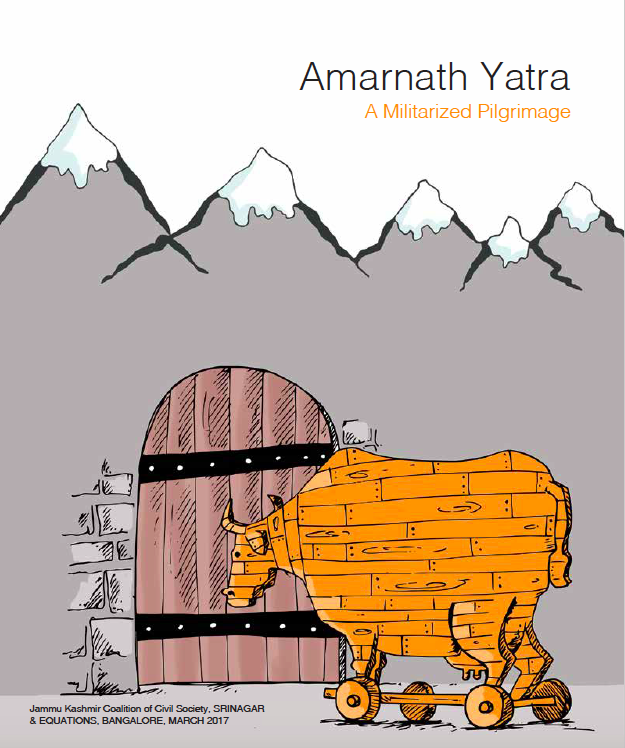 Anyone following Adityanath’s parliamentary career was aware of his interest in the Himalayan pilgrimages. He joined debates on China barring Kailash yatris at the border in 2015, as well as on the Amarnath pilgrimage in south Kashmir – another area that might seem outside the remit of an MP from Gorakhpur.

Except for the politics. For at least 25 years the Amarnath pilgrimage has been anything but a local issue, and a provocative report released this week sets out reasons why. Amarnath Yatra: A Militarized Pilgrimage is published by EQUATIONS, a sustainable tourism advocacy group in Bengaluru, and the Jammu-Kashmir Coalition of Civil Society (JKCCS) in Srinagar. It offers empirical insights and a sometimes tendentious perspective on the rapidly expanding pilgrimage, its nationalist overtones, and its effects on social relations and the ecology of the Lidder and Sind valleys in the state.

The destination of the Amarnath yatra is a cave and ice stalagmite that pilgrims hold as a sacred lingam. The route to the cave, more than 13,000 feet above sea-level, passes first through forests and pastures, then ice-fields and rock. Fatalities occur, and sometimes disasters – in 1996, heavy rain and avalanches led to stampedes that killed 243 people. The most serious challenge, though, is the Kashmir militancy, which necessitates a heavy military presence along the route.

Or is it the other way around? Using official data, the report shows how the 1990s, the peak decade of the militancy, was actually when the Amarnath yatra began to expand to reach its present scale.

Source: Amarnath Yatra: A Militarised Pilgrimage, data from Department of Tourism and SASB.

As radical sentiment spread, and militants forced Hindus out of the Valley, the authors suggest that the Amarnath yatra was promoted as an assertion of Hindu heritage, a conduit for Indian civilians into the region, and a nationalist claim to ownership of Kashmir.

Their history of the yatra links this recent assertion to earlier periods, such as the Dogra consolidation in the mid-19th century, when the yatra first began receiving state patronage. Since then, the devotion of the faithful has been periodically “instrumentalised” and turned to political ends. “It has affected the spirituality of the yatris,” Deependra Giri, mahant of the Dashnami Akhara in Srinagar, tells the authors, “since nationalist sentiment is often at the core of their reason to come on the yatra. All this has affected the atmosphere of the yatra itself.”

For many decades, the Amarnath yatra was a difficult route undertaken by a few thousand pilgrims, mostly sadhus, devout pilgrims from adjoining regions, or Kashmiri Pandits. The numbers rose in the mid-1980s, as Kashmir began to radicalise, then dipped at the onset of the armed militancy. It then hiked up steadily upward till 2010, when over six lakh yatris made the trek. The duration of the yatra, traditionally two or three weeks, widened out to a six to eight (this year, it will be conducted from June 29 to August 7). More pilgrims visit Amarnath each day of the season than used to in a year. 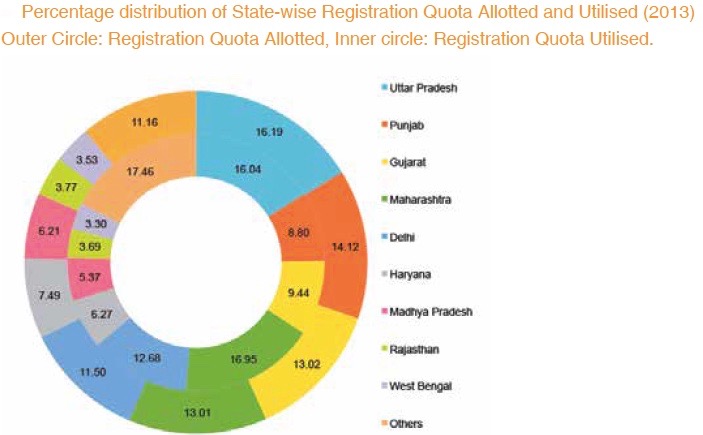 This expansion would have been impossible without an infrastructure of rest-camps, langars, toilets, clinics, fodder-stores for horses, cellphone towers and water lines, CRPF and BSF posts. All this was coordinated by the elected state government until 2000, when the Shri Amarnathji Shrine Board was formed – moving the management yatra to a powerful, autonomous body comprising the state governor (if Hindu) and eminent men and women who have served “the cause of Hindu religion and culture”.

The SASB proved less adept at balancing the interests of pilgrims and service-providers from other states with those of local Kashmiris, who have traditionally been employed to help the yatris. Predictably, it was also more susceptible to the lobbying of Hindutva groups, which saw an expanding yatra as a wedge to reopen the Valley to Hindu presence. These groups have now mobilised to build up “emerging yatras”, like the Buddha Amarnath, Kauser Nag and Sindhu Darshan Yatras, and drive political conduits further into the state.

Over time, the remote and challenging pilgrimage has become heavily trafficked, over-serviced and fully subsidised (including by the UP state government). It requires the deployment of 30,000 security personnel each year, not counting the army. Of course, it is polluted with human and municipal waste, which lies in ditches or is washed into the mountain streams. Religious organisations play bhajans on loudspeakers, and cut away the ice to make room for langars.

Environmental stress offers the strongest basis for building consensus on the regulation of the yatra. For pilgrims too, “the sanctity is often compromised by increased numbers of visitors, and the resultant degradation of the physical environment.” At the end of their journey, the sacred stalagmite is shrinking – last year it was ten feet tall, half its height in 2005. The SASB has considered mechanically refrigerating the cave to preserve it.

The authors claim that they had originally meant to write a purely ecological assessment. After making the pilgrimage themselves, they decided that “the mere study and interventions associated with its environmental impacts would only serve as an eye wash and not address the fundamental issues plaguing the yatra” – those being “the implications of this massive nationalist project.”

This back-story doesn’t really ring true. The lead authors of Amarnath Yatra: A Militarised Pilgrimage are human rights activists – both, in fact, have even been targeted by the government for their work – but they are not environmental or social scientists. Kartik Murukutla, a lawyer, was detained in 2015 at the Wagah border on dubious grounds, after presenting a report in Islamabad on violations in Kashmir. Khurram Parvez, the founder of the JKCCS, was arrested last year on his way to a conference in Geneva. He spent 76 days in custody before the government acknowledged it had no case against him. Their perspective on the growth of the yatra is welcome, but it sits uneasily with the empirical work and analysis that the report means to offer.

The rigorous research is sometimes undermined by an impulse to name injustice. A jawan beating a horse for holding up a procession is an expression of military dominance. Provisions made for the safety or comfort of yatris are assumed to be resources diverted away from locals. But pollution, exclusion and bullying occur wherever there is large-scale tourism in India. Some reference to a control might help show how the Amarnath route is specially inflicted.

On the agenda of Hindutva lobbies the report is convincing; on the role of separatists, less so. About the efforts of the Hurriyat Conference to limit the pilgrimage season, they say, “environmental concerns and the cultural onslaught are the roots for this demand” – as if the Hurriyat was no more than a Green NGO.

Mostly, the report makes unforced errors of presentation. Its chapter of conclusions opens with a long quote from Marx – religion as the opium of the masses – and then begins: “The State uses this opium to further its political agenda…” Other chapters are book-ended with derisive cartoons, which will invite a backlash rather than a conversation.

Whether this vitiates its analysis will depend on the reader’s own sympathies. There are serious environmental and social issues here, muddied by the framing of the yatra as a project of an occupation. A smaller, cleaner, more manageable Amarnath yatra would be in everyone’s interest – the pilgrims’ above all. But as ever, when it comes to Kashmir, a failure of forbearance bars the way to higher ground.