Two States and Two Scions: Will Akhilesh Yadav Face in 2022 What Tejashwi Yadav Did in 2020?

Uttar Pradesh and Bihar are neighbouring states with a vast demographic and cultural overlap near their borders. There are similarities too in the two regions’ political situations. Does one hold a clue to the other? 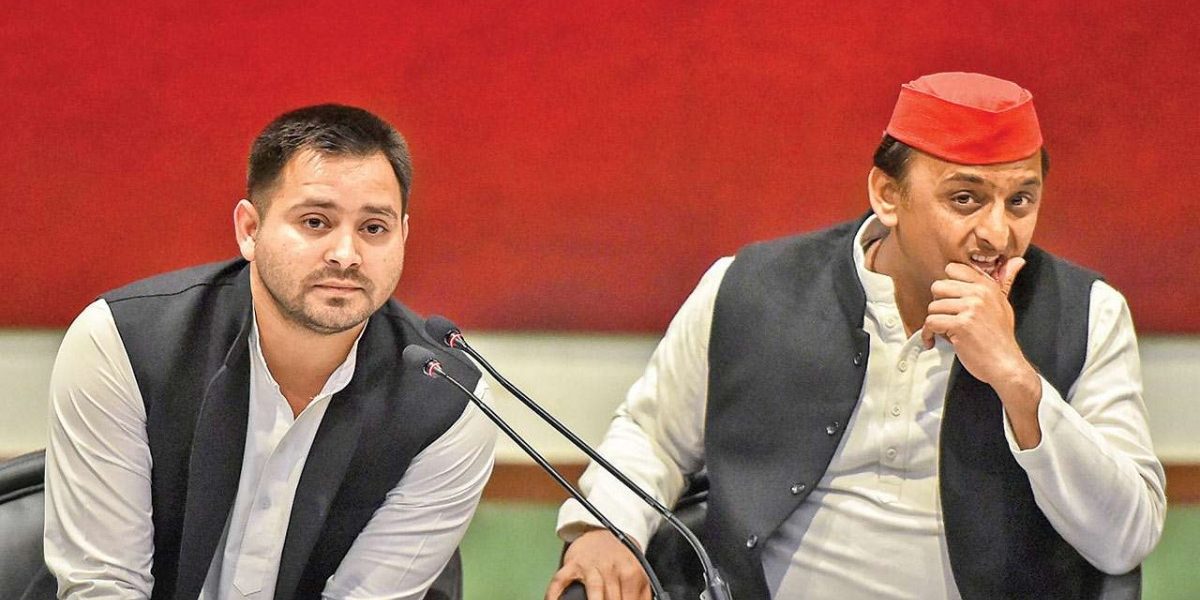 Patna: Late in 2020, Lalu Prasad Yadav’s son Tejashwi Yadav fought the assembly elections in Bihar with aplomb, piloting the Rashtriya Janata Dal (RJD) to a position that made it the single largest party in the assembly with 75 members of the legislative assembly (MLAs). But he failed to replace Nitish Kumar, who made it to his third term as the state’s chief minister by a whisker.

Early in 2022, Mulayam Singh Yadav’s son Akhilesh Yadav will lock horns with Yogi Adityanath in a similar fashion in neighbouring Uttar Pradesh. We will know only after the votes are counted, probably in February or March 2022, if Akhilesh will dislodge Adityanath or end up like Tejashwi.

In keeping with the respective realities of their states, the two regional kshatraps (leaders) of India’s Hindi heartland, Mulayam Singh Yadav and Lalu Prasad Yadav, had many similarities in their political operations. But they had dissimilarities too, given the variations in their respective areas of operations.

Whether it’s a coincidence or a well thought out design, Akhilesh and Tejashwi are also similar in many ways. But like their fathers, they have dissimilarities too. While they are said to enjoy a loving rapport with each other, they have different perspectives on different issues.

The political and bureaucratic circles of Bihar and Uttar Pradesh are almost unanimous in their opinions that Akhilesh and Tejashwi are “very good listeners”.

“Tejashwi Yadav patiently listens to views that may not be akin to what he thinks, but he respects even dissenting voices. He engages with diverse opinions,” said Manoj Jha, a member of parliament (MP) from the RJD and the party’s national spokesperson.

A serving senior IAS officer from Uttar Pradesh said much the same thing about Akhilesh. “He is a good listener,” the officer said.

He added: “Akhilesh is also a reader – he keeps abreast with the latest books. He is technology-oriented. An environmental and civil engineer by training, when he was the chief minister of Uttar Pradesh (2012-17), he was involved in discussions on projects including the metro, highways and the revival of lakes. He believes that Uttar Pradesh can push up its social and economic indices only through the collective efforts of the government, social entrepreneurs and corporates.”

Also read: RJD or NDA? Which Way Will Chirag Paswan Gravitate for Political Future in Bihar

When Tejashwi was Bihar’s deputy chief minister and minister of roads between 2015 and 2017, he displayed strong work ethics, said a retired bureaucrat who had served as a secretary at the time.

“Tejashwi was diligent and focused. He had a lot of innovative ideas to facilitate the construction of rural roads and highways and was meticulous in reviewing the work,” said the former officer.

However, Akhilesh and Tejashwi have differing views on the involvement of the corporate sector in the development of their states.

“Tejashwi is not anti-corporate,” said Jha. But Bihar’s bureaucrats believe that the young man does not necessarily believe that private sector involvement is a requisite tool for development the way that Akhilesh does.

This difference between the two, however, may be attributed to the views of their fathers. The private sector has never fitted in Lalu Prasad’s schemes of things, whereas Mulayam had always had strong connections with corporates and Bollywood.

Unlike Akhilesh, Tejashwi could not serve his full term. He lost his place in government when Nitish Kumar deserted the Mahagathbandhan or grand alliance of anti-Bharatiya Janata Party (BJP) parties that came to power in Bihar in 2015 and returned to the BJP in 2017.

To compare the performances of Akhilesh and Tejashwi in public life is, however, impossible. Born in 1989, Tejashwi is considerably younger than the 1973-born Akhilesh and has had little experience of governance. While Akhilesh was first elected as an MP from Kannauj in 2000, Tejashwi made his governance debut in the Bihar assembly from Raghopur in 2015.

But in terms of party leadership, they appear to be somewhat at par. Akhilesh has effectively taken over the leadership of the SP from Mulayam and is the party’s national president. But while Lalu continues to be the RJD boss, Tejashwi, who led the RJD through the 2020 Bihar assembly elections, has emerged as the inheritor of Lalu’s legacy. The cadres and the party’s old guard have both accepted Tejashwi as their leader.

Like his father Lalu Prasad, Tejashwi accepts the “centrality” of the Congress in the battle against the BJP.

“There can’t be an anti-BJP alliance without the Congress. However, as a national party, the Congress should accord due respect to the regional parties in terms representation,” said Tejashwi about efforts to form a political third front after a meeting this June in New Delhi called by Nationalist Congress Party leader Sharad Pawar.

But in the context of the UP elections, Akhilesh had told a group of reporters in Lucknow last month that: “We will keep away from the big parties (including the Congress) and align with the smaller parties.”

Also read: Yogi’s Outreach To Disgruntled Deputy Shows All Is Still Not Well Within UP BJP

On the other hand, the level of trust between the Congress and the Samajwadi Party (SP) founded by Mulayam Singh Yadav and now led by Akhilesh Yadav has been weak since the Congress withdrew its support to the SP in 1991, causing the fall of the Mulayam government. There are only a few instances of the Congress and the SP fighting elections together in Uttar Pradesh.

Akhilesh and Tejashwi have a common foe – the BJP. The BJP has been at war with Lalu ever since he became the chief minister of Bihar in 1990 and had senior BJP leader L.K. Advani arrested. There has never been a ceasefire between the BJP and RJD. Nitish Kumar, an old associate of Lalu’s, broke ranks with him in 1995 and later joined the BJP-led National Democratic Alliance (NDA), strengthening the NDA against Lalu and becoming chief minister in the process. The BJP has effectively used Nitish to expand its reach in Bihar.

In 1993, the Samajwadi Party and the Bahujan Samaj Party (BSP) formed an alliance that squarely defeated the BJP in Uttar Pradesh. Mulayam became the chief minister, but the friendship between Mulayam and Mayawati, the leader of the BSP, was short-lived. Mayawati broke away from the alliance with the SP, took the support of the BJP and became the chief minister of UP. Ever since then, Mayawati, the strongest Dalit leader in UP, has prevaricated on the issue of secularism, which has invariably worked to the BJP’s advantage.

In the same way that Nitish Kumar joined the Mahagathbandhan in 2015 to defeat the BJP, Mayawati allied with the Akhilesh-led SP in the 2019 UP assembly elections. But victory in those elections went to the BJP. Now the grapevine has it that the BSP will directly or indirectly support the BJP in UP’s 2022 assembly elections.

The background of the 2022 UP elections is somewhat similar to the one that existed in Bihar just before the 2020 assembly elections. In 2020, the Bihar chief minister, Nitish Kumar, was at his lowest in terms of popularity thanks to the first phase of the COVID-19 pandemic and the visible failures of the state’s law and order, education, health and overall infrastructure situations. He was also not on very good terms with his NDA partner, the BJP, which was propping up Chirag Paswan in a bid to take full control of Bihar. In the elections, Nitish’s JDU was reduced to 43 seats in the assembly, but he managed to retain his position as chief minister.

Yogi Adityanath, the current chief minister of Uttar Pradesh is arguably worse off now than Nitish was then. As the second wave of the pandemic played havoc in UP, the river Ganga became a carrier of thousands of corpses that floated from Allahabad to Unnao to Ballia. The Adityanath government is being severely criticised for mishandling the pandemic and even fudging the statistics of the patients and fatalities of the disease. Moreover, UP’s political circles are agog over suggestions that Adityanath has fallen from the grace of Prime Minister Narendra Modi and Union home minister Amit Shah, who appear to be trying to prop up a former Gujarat cadre IAS officer, Arvind Sharma, against him. But then Adityanath, the saffron-clad mahant of the Gorakhnath Math, is a true hero of the Hindutva movement and is a master of venomous anti-Muslim rhetoric that helps polarise privileged Hindu communities.

To his advantage, Akhilesh Yadav has the well-oiled machinery of the Samajwadi Party aside from a relatively clean and sober image among the electorate. A trip to some parts of Bareilly in western Uttar Pradesh showed that few people speak against Akhilesh on the scores of efficiency and performance. But Adityanath is said to have the potential to neutralise Akhilesh’s good image by playing the militant Hindutva card, which works better in UP than in Bihar.

Nalin Verma is a senior journalist, author and professor of journalism and mass communication at Invertis University, Bareilly, Uttar Pradesh