Turnout at Akhilesh Yadav's Rallies Will Boost SP. But Is It Enough to Dethrone BJP?

Ahead of next year's assembly elections, political observers say that the political scenario in Uttar Pradesh is in a state of churn – which will benefit the Samajwadi Party chief. 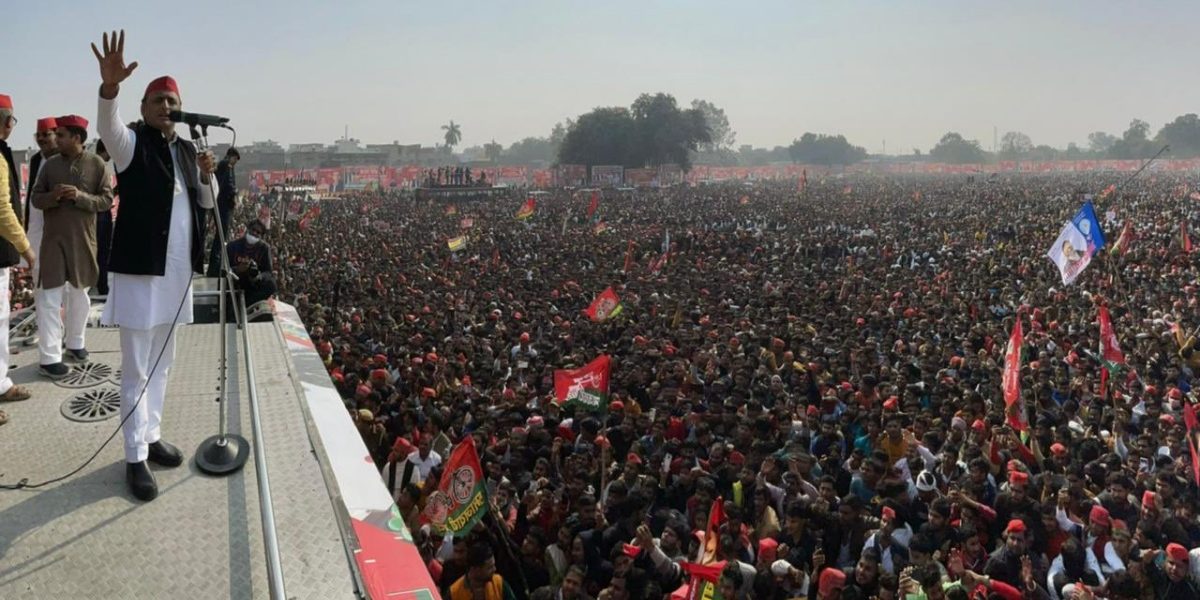 New Delhi: Akhilesh Yadav is drawing huge crowds at his rallies across the poll-bound Uttar Pradesh. Images of massive gatherings for the Samajwadi Vijay Rath Yatras flood the Samajwadi Party (SP)’s social media accounts even as the ruling Bharatiya Janata Party (BJP) events dominate the mainstream media space. However, the bigger question on everyone’s mind is whether these crowds will translate into votes for the SP, which has emerged as the primary challenger to the dominant BJP.

In the recent past, Tejashwi Yadav’s rallies in Bihar and Amit Shah-led events in West Bengal also attracted large crowds – but they bore no fruit for their respective parties in the assembly polls. Is Akhilesh Yadav, the former chief minister of India’s most populous state, heading towards a similar outcome?

Political observers in the state do not deny such a possibility but emphasise that the political scenario in Uttar Pradesh is in a state of churn, from which the most likely beneficiary will be Akhilesh. What makes them think so?

Veteran journalist and political analyst Ramdutt Tripathi believes that there is a visible shift in the ranks of Brahmins and non-Jatav Dalits towards the SP. “These sections voted for the BJP in the last few elections and contribute significantly to the electoral equation. However, it is too early to predict whether the SP will be able to sustain the momentum with any certainty. There is, however, one clear trend. The BJP’s social base is cracking. But whether it will be enough for the SP to come to power is unclear,” he says.

Over the last two years, the SP has successfully pivoted the electoral campaign towards livelihood issues while highlighting the Adityanath-led state government’s failures to contain rising unemployment and massive distress at all levels during the pandemic. It has been able to remind the electorate of the development work during Akhilesh’s chief ministerial tenure, which is the reason that the SP president enjoys significant goodwill among all sections – despite losing to the BJP quite abysmally in the 2017 assembly polls.

Since caste and community support conventionally rule the electoral equations in UP, the SP has also shown promptness in widening its social base beyond the confines of Yadav and Muslim groups. Akhilesh has not only allied with smaller single caste parties like the Mahan Dal, O.P. Rajbhar’s Suheldev Bharatiya Samaj Party, formerly a BJP ally, the Jat-led Rashtriya Lok Dal and the Sanjay Chauhan-led Janwadi Party (Socialist) but has also resolved his dispute with his uncle Shivpal Yadav who had managed to dent his prospects in around 40 seats in the last assembly polls. At the same time, he has also successfully poached influential leaders from the Bahujan Samaj Party (BSP) and the Congress to widen his appeal among different caste groups.

With the BSP barely showing any initiative to take on the dominant BJP and the Congress losing much of its influence in the state despite running a spirited campaign under Priyanka Gandhi’s leadership, the SP has emerged as the frontal challenger to the BJP.

As per ground reporters, Akhilesh’s rallies have attracted a fair degree of spontaneous turnouts, apart from those who have traditionally supported the SP. This reflects his popularity in the state, even if it may not be enough to defeat the BJP – which enjoys nearly 40% of the vote share in the state, far ahead of other parties. The optics of such a turnout contrasts that of the gatherings in Narendra Modi and Adityanath’s rallies, where the state machinery was employed to bring people from various regions of the state. 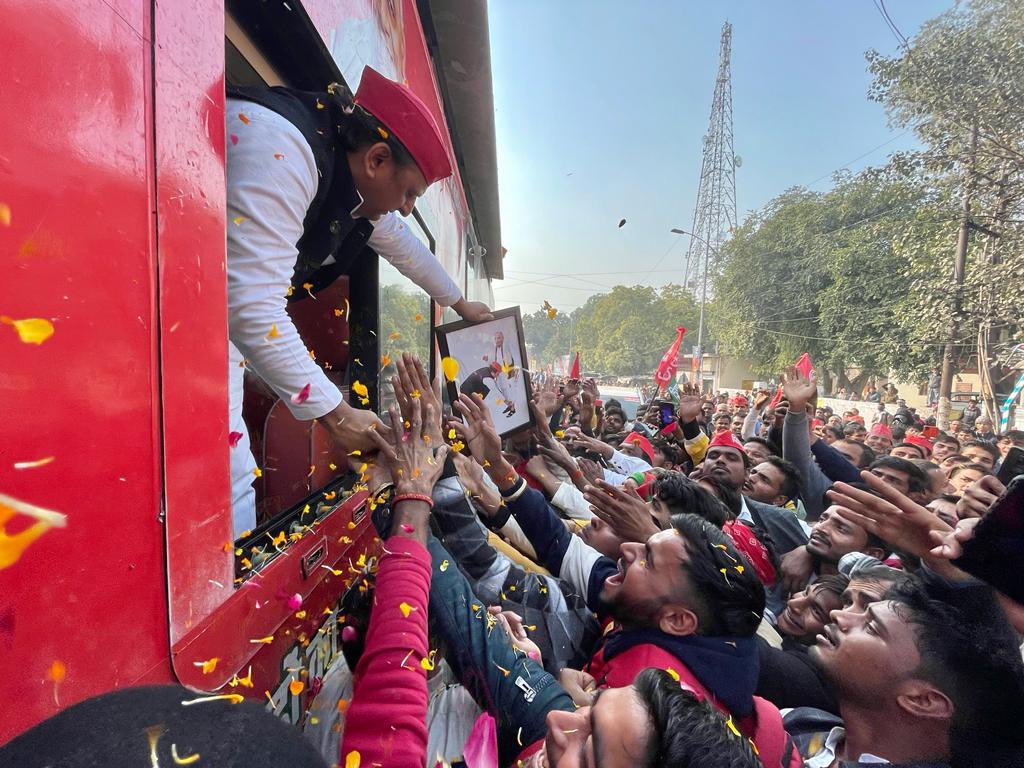 Can SP breach the gap?

However, with the BJP showing some weaknesses, the moot question is whether the SP will be able to breach the gap to secure a majority in the assembly.

Samajwadi Party leader and political analyst Sudhir Panwar says it is not impossible. Panwar, who also teaches at the Lucknow University, believes that people of the state remember Akhilesh’s work and have missed the holistic welfare model – especially during the “disastrous” governance over the past two years.

“The BJP came to power on the twin planks of Hindutva and development. However, Adityanath as the chief minister has only carried forward the BJP’s Hindutva legacy. He is not perceived as a development icon,” Panwar says.

“With such a record, Adityanath will only enthuse the BJP’s core voters but not those who joined its ranks after 2014. The aspirational voter is thus looking towards the SP, and that explains the spontaneous gatherings at Akhilesh Yadav’s rallies. That voter will also impact the outcome in around 120 urban seats where BJP has historically performed better than other parties,” Panwar adds.

Panwar’s explanations do have a point if the BJP’s recent manoeuvres are taken into account. The saffron party had been running a campaign on hardline Hindutva and claimed to have improved the law and order situation in the state drastically, mostly to lampoon the previous SP regime and brand Muslims and Yadavs as “violent” communities. However, over the last few months, Adityanath has only been attempting to put forward his achievements on the development front. Thus, one can see crores being spent on advertisements that claim improvements in infrastructure, irrigation projects, a range of welfare schemes et al.

Yet, none of it stuck to the extent that the BJP perhaps expected, forcing the party to push Prime Minister Narendra Modi to the forefront of the electoral battle months ahead of the polls. Over the last two months, Adityanath has been relegated to a secondary position while Modi has inaugurated a string of development-related projects – airports and canal projects to the Kashi Vishwanath corridor project. The obvious takeaway from such a last-minute turn of events is that the BJP is attempting to turn the UP polls into a match between regional leaders and Modi himself. 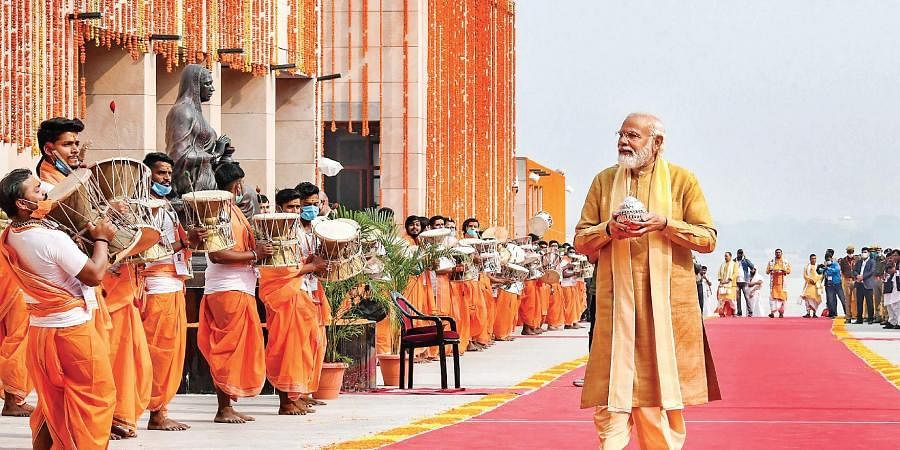 Shashi Kant Pandey, professor of political science at the Lucknow-based BR Ambedkar University, agrees. “Until a few months ago, it seemed Akhilesh was not in the race. While the crowds at his rallies are not a benchmark for the electoral outcome, it definitely reflects the growing discontent against the state government, especially in the aftermath of COVID-19-induced economic fallout,” he said.

Pandey believes that the economic crisis affected the non-creamy layer section of the OBCs the most – they also form BJP’s biggest social base. “The non-creamy layer of OBCs joined the BJP’s ranks only in 2014. So they can’t be called the BJP’s core voters. So there is definitely a possibility of them switching sides,” he says, adding that many of the discontented leaders of various parties, often from non-Yadav OBCs, have joined the SP in the last few months.

The SP lagged behind the BJP by almost 18 percentage points in terms of vote share in the 2017 assembly polls, which means Akhilesh Yadav has to make up considerable ground to defeat the saffron party. However, most would agree that he has come close enough to unsettle the BJP, which has now mounted a larger-than-life campaign to retort.

Pandey says Akhilesh’s chances have also become brighter with the fall of the BSP, which is facing an “existential crisis” given its inactivity in the midst of election heat. “Had it been a triangular contest, it would have been much easier for the BJP. But it increasingly looks like the polls will be a bipolar contest between the SP and BJP. In that respect, there is a chance that all the anti-incumbency votes would consolidate behind the SP. That prospect will surely worry the BJP,” he says.

For now, both the parties will have to contend with another contest – ticket distribution. The SP will not only have to present a better political vision to the voters but also pacify ticket seekers who may have to sacrifice their seats to accommodate allies. The BJP, too, is looking to field at least 150 new faces. But it has a better record in managing internal discontent. The SP will, therefore, have to match the saffron party in dealing with rebels.

At the moment, the churn – both social and political – is palpable in UP. To what extent it will help Akhilesh remains to be seen. A lot depends on whether the SP president sustains the momentum or not, and whether it can build a united front to take on the might of the Modi-Shah duo, whose sole focus currently appears to be the UP polls.