After Priyanka Eviction, Govt Clarifies that Advani Can Keep Lutyens Bungalow 'for Life'

On security grounds, the cabinet approved lifetime government accommodation for the former deputy prime minister as well as official housing for Murli Manohar Joshi till June 2022.

New Delhi: The notice sent by the Ministry of Housing and Urban Affairs (MoHUA) to Congress general secretary Priyanka Gandhi Vadra asking her to vacate the government bungalow she has been living in since 1997 on the ground that her Special Protection Group (SPG) security has been withdrawn has raised questions about the Narendra Modi government’s use of the ‘security’ yardstick to grant official housing to some while denying it to others.

Notably, the Centre continues to provide similar accommodation in Lutyens’ Delhi to senior BJP leaders L.K. Advani and Murli Manohar Joshi – who hold no official or parliamentary position – though they too do not have SPG cover. The government’s logic, as approved by the cabinet committee on accommodation last June, is that the “threat perception” warrants continuing provision of the housing they have enjoyed all these years.

Thus, Advani will get to keep his government accommodation “for life” while Joshi’s allotment on security grounds is currently valid till June 25, 2022. A Ministry of Housing note sent to The Wire states that these decisions were taken by the cabinet committee on accommodation:

“As per extant policy, private persons other than SPG protectees are not entitled to be allotted government accommodation on security ground. However, cabinet committee on accommodation (CC) make certain exceptions based on threat perceptions to the individuals.

“On the basis of recommendation of Ministry of Home Affairs about persons given Z+ security cover, and requiring government based on threat perception, CCA considers such mattr.

The note does not mention when the CCA met and took this decision.

In May 2015, the Modi government had told parliament that only three private citizens – Priyanka Gandhi Vadra, former Punjab police chief K.P.S. Gill and former Punjab Youth Congress chief M.S. Bitta – had  government accommodation and that this was because they were SPG protectees. In December 2015, the BJP politician Subramanian Swamy was also given Lutyens’ housing at the taxpayer’s expense for “security” reasons. He was not a member of parliament at the time.

The notice to Gandhi, issued by the Directorate of Estate Department, had linked the decision to cancel her allotment to the revocation of special protection. The SPG cover of the Gandhi family was withdrawn by the Centre in November 2019.

“Consequent upon withdrawal of SPG protection and grant of Z+ security cover by Ministry of Home Affairs, which does not have provision for allotment/retention of Government accommodation on security grounds to you, the allotment of Type 68 house No. 35, Lodhi Estate, New Delhi is hereby cancelled w.e.f 01/07/2020. One month concessional period on the same rent up to 01.08.2020 is allowed as per rule,” the letter read.

It also cautioned Gandhi, who had been allotted the bungalow on February 21, 1997, as she was an SPG protectee, that “any stay beyond 01.08.2020 will attract damage charges/penal rent as per rules.”

After the ministry sent the notice, Gandhi paid the dues worth over Rs 3.46 lakh, which had accrued up to June 30. A ministry spokesperson later acknowledged this saying that the online payment of the dues has been received. “Hence, now dues as on 30.06.2020 is nil against her (sic).”

However, the larger question of the rights of senior politicians to occupy government accommodation when they are no longer holding any post that allows them to do so remains.

Earlier, the  ministry hd spelt out the rules in regard to such allotments. Its spokesperson said: “Cabinet Committee on Accommodation (CCA) in its meeting held on 07.12.2000 reviewed the guidelines on [the] allotment of government accommodation on security ground and decided that in future no private person, other than those who are SPG protectees, shall be given government accommodation on security ground. Such allotments were to be done at the market rate i.e. 50 times of normal rent.” It was also pointed out that in 2015, a decision was taken to modify the rules.

Citing that under the norms, no exceptions could be made for the allotment or retention of government housing unless the Ministry of Home Affairs says so, the MoHUA spokesperson said, “in view of this, she is no longer entitled to government accommodation and her allotment has been cancelled by the Directorate of Estate.”

The issue was immediately contested by Congress leaders who accused the Centre of vendetta politics. Party spokesperson Randeep Surjewala commented: “Blind hatred and a sense of vengeance with the Congress leadership is evident by the BJP and Modi government… The notice to clear Priyanka’s house shows the uneasiness of Modi ji-Yogi ji. We are not afraid of the frustrated decisions of the authoritarian government.”

A look at the issue reveals that the BJP government at the Centre has not dealt with the issue even-handedly.

It also specified that the “government provides residential accommodation to its employees including the Members of Parliament and other dignitaries on a license basis while they are in service or till the term of their office.”

Also, it noted that “the notice will require the individual to cite the reason as to why an eviction order should not be made against him, within three working days.”

Despite the new law, a report earlier this year had pointed out that two MPs and nine former MPs were among 587 people who are in illegal possession of government houses. An internal MoHUA report revealed that there were nine families who are occupying government flats for more than a decade and another nine whose dues were more than Rs 50 lakh.

Centre made exceptions for Advani, Joshi

However, it was pointed out then that some exceptions could be made for senior party leaders. Though the rules provided that all MPs would have to vacate their official bungalows within a month of dissolution of the Lok Sabha, in the case of Advani and Joshi, who did not contest the 2019 general elections, the Centre decided to make exceptions. Through the MHA, security concerns were cited as reasons to allow them to continue in their government accommodation at Prithviraj Road and Raisina Road respectively. 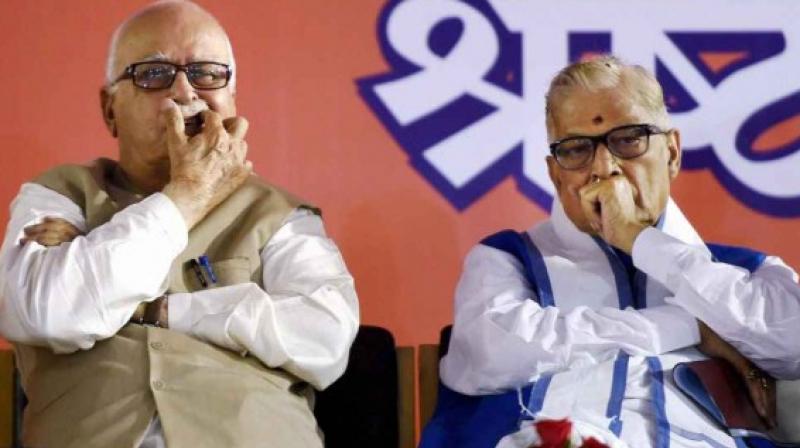 However, with both these leaders still occupying government accommodations, despite not being SPG protectees, the argument furnished in Gandhi’s case becomes weak, especially since it is the MHA’s perception on threat which determines not just the nature of government accommodation a leader can occupy but also the protection they enjoy. Priyanka Gandhi Vadra has Z+ security cover, which is the highest level of protection after SPG cover. Advani and Joshi also have Z+ category security, though it is not clear when this was provided to them.

While the government has decided the threat perception for Vadra, Advani and Joshi is the same as far as entitlement for Z+ security cover is concerned, the government decided on June 25, 2019 that the threats faced by the two BJP veterans is such that they can be protected only if they live in a government bungalow, as envisaged by Annexure II of the ‘Compendium of the Allotment of Government Residences (General Pool in Delhi) Rules, 1963 & Guidelines’.

The “threat perception” for Advani and Joshi stems from their involvement in the demolition of the Babri Masjid in December 1992, along with many other BJP and Hindutva leaders. However, none of the others standing trial for the crime are considered so at risk as to secure government housing for themselves.

Note: This article has been updated at 5 pm on July 2, 2020 to include details of the short note the Union housing ministry sent to The Wire