After 26 Years, SAD's Politics Returns to Its Old Haunt. But Not Everyone Is Happy

Speeches by SAD leaders in a recent meeting signified that the party was ready to return to its Sikh 'Panth' agenda. Many feel this reeks of convenience. 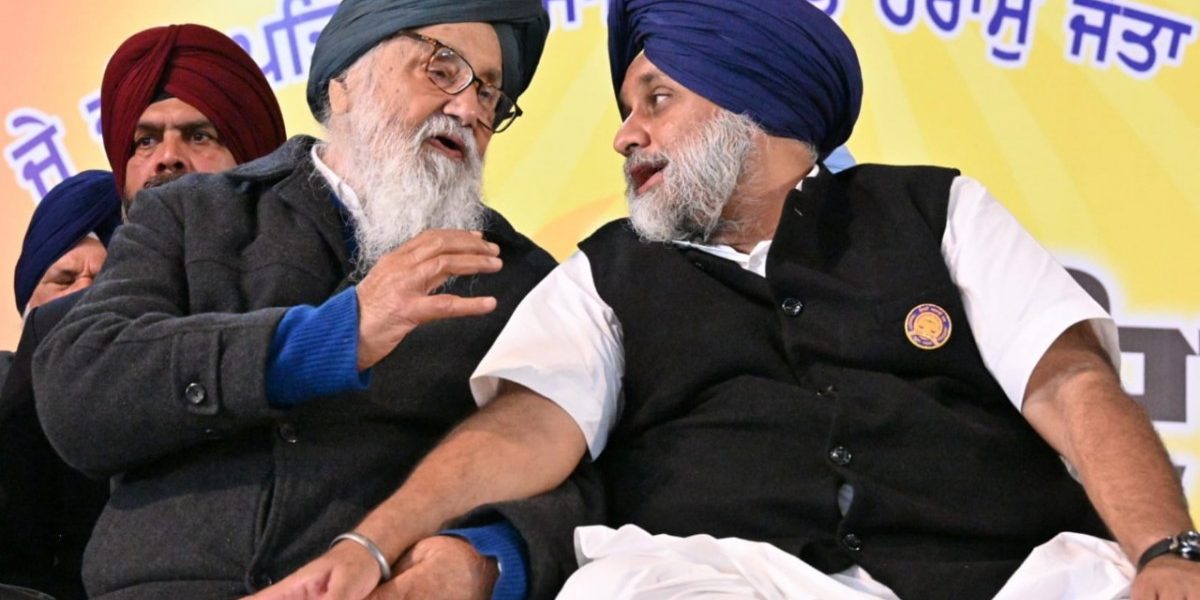 Jalandhar: On January 2, a ‘Panthic Rosh Diwas’ was held at the Diwan Hall of the Gurdwara Manji Sahib in the Golden Temple complex of Amritsar.

In it, Shiromani Akali Dal patron and five-time chief minister of Punjab Parkash Singh Badal said, “Devious conspiracies are at work to weaken the ‘Khalsa Panth’ and dilute its separate and unique religious identity.”

He added, “Our sacred Gurdhams [religious places] and their unique religious ideology are being targeted. The ‘kaum’ [an Urdu-Punjabi word which means nation, nationality and community] will have to guard against attempts by powerful agencies to create dissensions, disunity and mutual distrust within the community by using the age-old tactics of Trojan horses.”

The ex-CM warned against dangerous conspiracies to install government stooges as “neo-masands” in Gurdhams, hinting at the Bharatiya Janata Party’s recent move to take control of the Delhi Sikh Gurdwara Management Committee through Manjinder Singh Sirsa.

‘Masand’ denotes preachers who used to propagate the Sikh religion. They were appointed by 10th Sikh Guru, Guru Gobind Singh, but carry a negative connotation because of their corrupt practices in running gurdwaras. Calling one a “masand” is ascribing him with greed and immorality.

After 26 years, the 100-year-old party, which came into being on December 14, 1920, after facing political, religious and existential challenges is back to its core ‘Panthic’ politics again. ‘Panth’ is popular expression for the Sikh religious community.

Known for morchas, agitations, its role in the freedom struggle and the ‘Punjabi Suba’ movement of 1953 for a Punjabi speaking state, SAD took a quantum leap from its Panthic ideology during the Moga Conclave of 1996.

Here, SAD and BJP forged an alliance which remained until they parted ways in September 2020 over the now repealed three farm laws.

Until it entered into this alliance, SAD could never complete a term. Afterwards, SAD was the only party to have ruled Punjab for two consecutive terms – from 2007 to 2017.

Political observers and those who remained at the helm of affairs in SAD, Shiromani Gurdwara Parbhandak Committee (SGPC) and the Akal Takth viewed the ‘Panthic Rosh Diwas’ as a step towards regaining the party’s lost political ground. 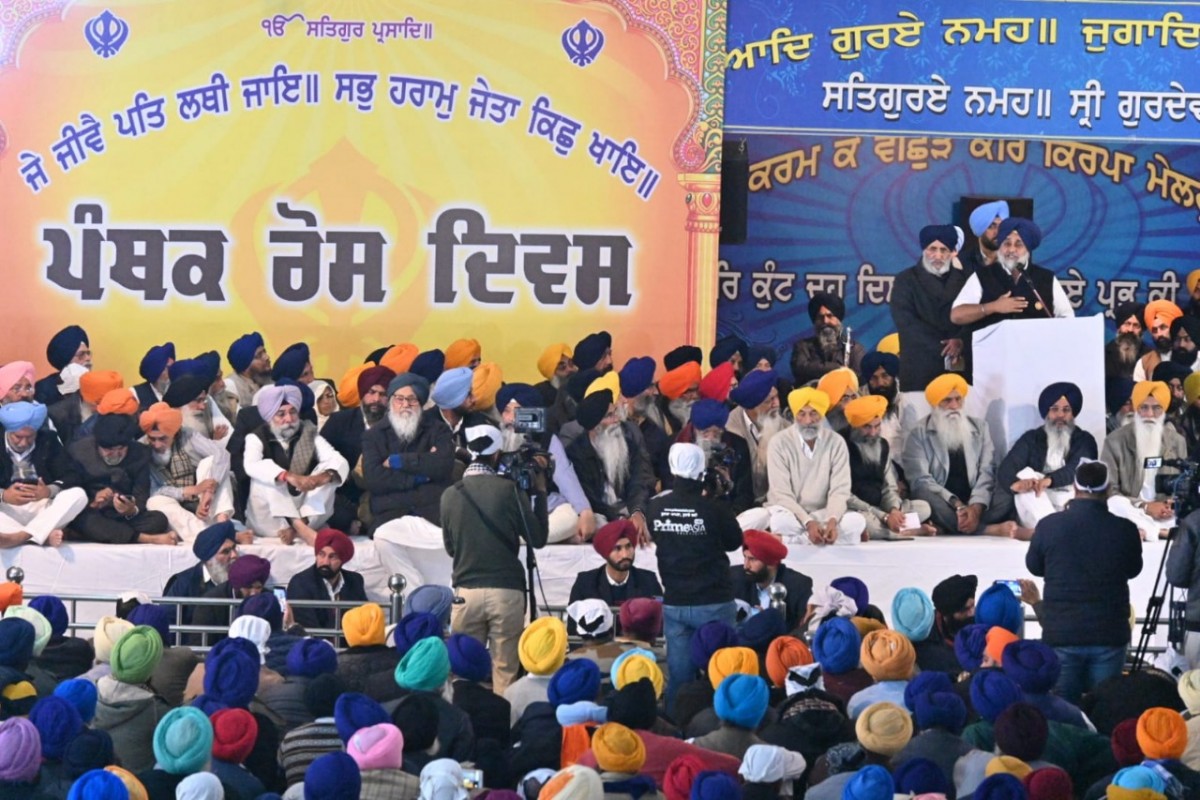 The Panthic Rosh Diwas programme by SAD. Photo: By arrangement

Chandigarh-based senior journalist and author Jagtar Singh said that with elections in mind, SAD was trying to revive the Panthic narrative but subject to its own convenience. “SAD abandoned the Panthic agenda during the Moga conclave and replaced it with Punjab, Punjabi and Punjabiyat. Next year, SAD-BJP came to power and Parkash Singh Badal became the chief minister,” he said.

Jagtar Singh said that though the SAD leadership led by Badal has held Panthic gatherings but the fact is that they carry the baggage of the 2015 Bargari sacrilege and the Behbal Kalan police firing which killed two Sikh youth.

“The Akali leadership wants to use the sacrilege incident of December 15, 2021, at the sanctum sanctorum of Golden Temple to create a narrative that the Panth is under attack. But in fact they should apologise for the 2015 Bargari sacrilege, which happened during their tenure. If the Panth was not under attack during their SAD-BJP rule, how come it is under attack now?” he asked.

In his address Parkash Singh Badal warned against the conspiracy to set fire to Punjab through communal polarisation. “The hard-earned atmosphere of peace and communal harmony is being put to torch by powers that be. They will finally set the flames on Punjabis themselves in a repeat of 1980s and 90s simply to further vested petty political interests,” he said, demanding a probe into the recent sacrilege incidents by a sitting judge of the high court.

Reacting to Badal’s address, former Jathedar of Akal Takth Bhai Ranjit Singh said, “Parkash Singh Badal is worried that his political ground is gone. He is simply concerned about himself and the political future of his son Sukhbir Singh Badal. Badal played dirty tricks with the Panth and is now using the Akal Takth Jathedar to garner Sikh votes.”

Ranjit Singh wondered what the point of holding ‘Panthic Rosh Diwas’ over the sacrilege incident at Golden Temple was at all. “Where was he seven years ago when sacrilege incidents took place? His agenda is to use Akal Takth, its platform and the SGPC to win assembly elections. Badal usually remembers the Panth when he is out of power,” he said.

Notably, Ranjit Singh was removed from the post of Akal Takth Jathedar in 1996 following a dispute between then SAD president Parkash Singh Badal and SGPC president Gurcharan Singh Tohra.

Even Bibi Kiranjot Kaur, the granddaughter of Master Tara Singh, who was one of the founding members of  SGPC said that this was a convenient turn for SAD.

“It is not that SAD is returning to the Panthic agenda, they were always a Panthic party with Amritdhari Sikhs as its members. Right from 1920, Akalis started as ‘Gurdwara Sewa Dal’ as a religious front, which later became political. There is no harm in Panthic ideology but over the years Akalis slipped from its core values of standing for Sikh issues, injustice and religious values. Who does not know how SAD shielded IPS officers like Izhar Alam and Sumedh Singh Saini, who were accused of killing youth in fake encounters? While Saini was made DGP Punjab, Alam led ‘Alam Sena’ and killed several youths during militancy in Punjab. Perhaps, Akalis are now remembering the Panthic ideology to reclaim lost political ground.”

Notably, in November 2020, Akal Takth Jathedar Giani Harpreet Singh had also given a call to SAD to start a journey from ‘Punjab to Panth’.

Based on religious and political aims, the resolution mentioned that the Union government’s authority should be confined to defence, foreign affairs, communications, railways and currency.

It also advocated for a strong federal structure with more power to all states, transferring Chandigarh to Punjab and Punjabi speaking areas of neighbouring states – a demand, which Sukhbir Badal is seen making these days in political rallies.

BBC Punjabi journalist Pal Singh Nauli, who has been closely following SAD’s politics said, “While BJP remained committed to core ideology of Hindu Rashtra but Akalis abandoned Anandpur Sahib Resolution reflecting its shift from panthic ideology. The Anandpur Sahib Resolution also spoke about Sikh religion, Panth and way of life, which they abandoned at Moga Conclave of 1996. When SAD-BJP came to power from 1997 to 2002, Punjab went neck deep into corruption. Five years later, when SAD regained power in 2007, Badal’s second generation took over the reins of the party.”

Also read: SAD Walking Out of NDA is a Natural Outcome of BJP’s Anti-Minority Campaign

He pointed out that when Sukhbir Badal became the president of SAD in 2008, he shifted party office to Chandigarh, which neither appealed to Sikhs nor to Punjab. Interestingly, when SAD celebrated its 99th foundation day, Sukhbir had stated that they would make a party office in Amritsar but that never happened.

Nauli said that Akalis reduced Panthic issues to their visits to Harmandir Sahib Amritsar, which holds a sacred place in Sikhism. “The Panthic agenda of SAD witnessed a setback in 1999, when Parkash Singh Badal started the ‘envelope culture’ of appointing SGPC chief through an envelope,” Nauli added.

This started after the demise of Gurcharan Singh Tohra in 2004, Nauli said, which in turn reflected SAD’s control over SGPC. “Repeated interference of Badals in the functioning of SGPC to reap political dividends dented Sikh issues to such an extent that many hardcore Sikhs started drifting away from them,” he said.

Further, he said, that there was a time, when only ‘Amritdhari’ Sikhs who do not smoke, drink alcohol or consume non-vegetarian food were allowed to become SAD members but that is not the case anymore. “Parkash Singh Badal’s differences with ex-SGPC presidents Gurcharan Singh Tohra and Jagdev Singh Talwandi, his silence over extra judicial killings of Sikh youth including 1986 Saka Nakodar and 2015 Bargari sacrilege are just some of the incidents which kept pushing Akalis into deep crisis,” he added. 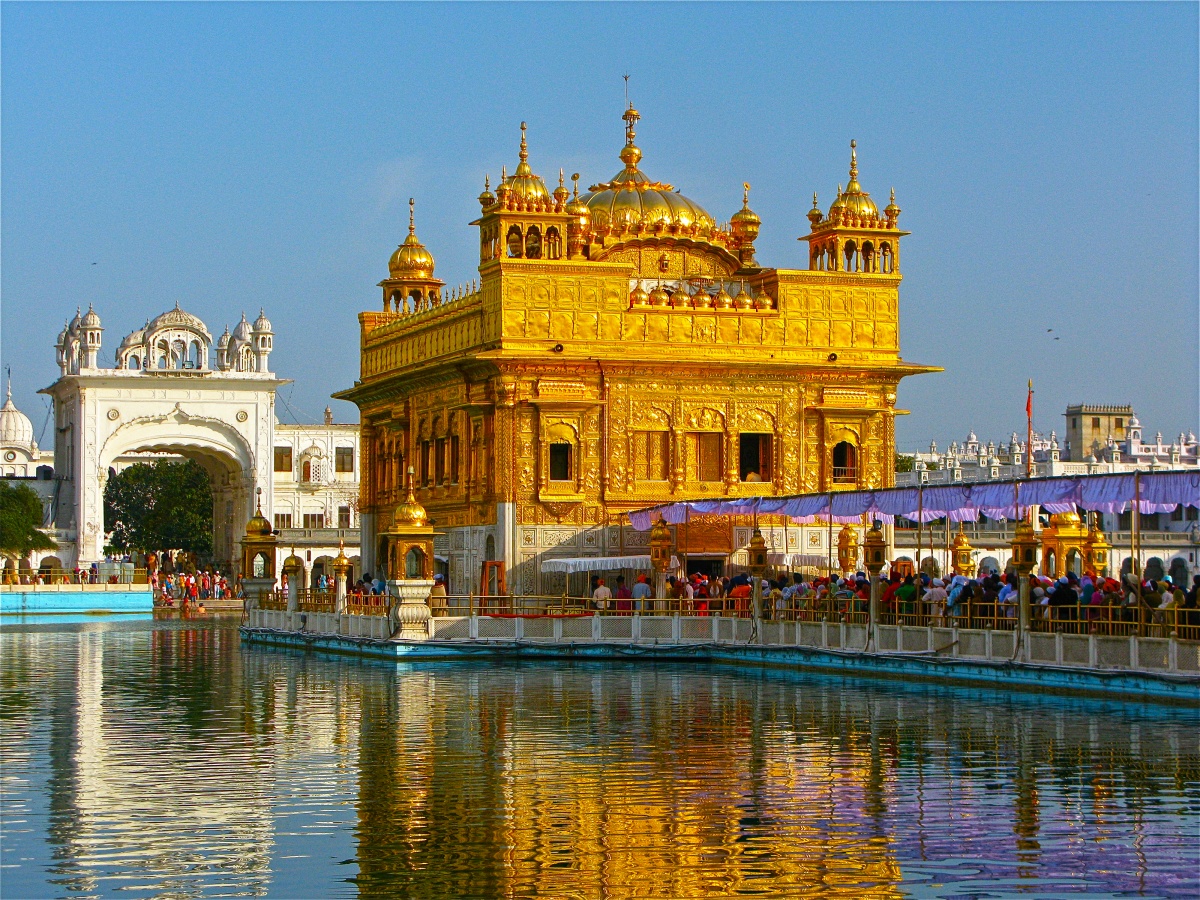 After negotiations with the Union government on Anandpur Sahib Resolution failed, SAD led by the then president Harchand Singh Longowal launched Dharam Yudh Morcha on August 4, 1982 in alliance with Jarnail Singh Bhindrawale, the head of Damdami Taksal (a Sikh seminary).

The main aims of Dharam Yudh Morcha was prevention of digging of Sutlej Yamuna Link (SYL) canal, retention of Punjab’s River waters, which was being shared with non-riparian states Haryana and Rajasthan and the economic growth of Punjab.

Before these could be fulfilled, Punjab slipped into militancy backed by Pakistan. This was the time when Sikh hardliner groups started demanding a separate sovereign state and SAD was splintered into various factions.

The failure of the centre to address the social, political and economic problems of Sikhs led to Operation Blue Star in 1984, the assassination of ex-Prime Minister Indira Gandhi by her Sikh bodyguards and the anti-Sikh pogrom that jolted the nation.

In March 1985, Akalis again held a conference at Sri Anandpur Sahib asking centre to accede to its demands, which resulted in Rajiv-Longowal Accord on July 24, 1985.

SAD led by Surjit Singh Barnala government in 1985 could not pull along and Punjab came under President’s Rule for five years from 1987. Around mid-90s, militancy was at its peak, hardliners were either killed or marginalised. By this time, Akalis led by Parkash Singh Badal had pulled moderates into its fold.

A part of Sukhbir Badal’s address during ‘Panthic Rosh Diwas’ went viral on social media, where he invoked the Babri Masjid demolition and said, “Ever since BJP demolished Babri Masjid, Muslims never voted for them. But look at yourself, Sikhs are still voting for the Congress whereas they stormed the Akal Takth with tanks and ammunition. When Akal Takth was attacked, Giani Zail Singh was the President of India and Buta Singh was the Union home minister but did they resign? They didn’t. But we resigned when the farm laws were brought. Sikhs are joining BJP these days. Also look at farmers’ union leader Balbir Singh Rajewal, ever since farm laws have been repealed, he did not utter a single word against the BJP.” 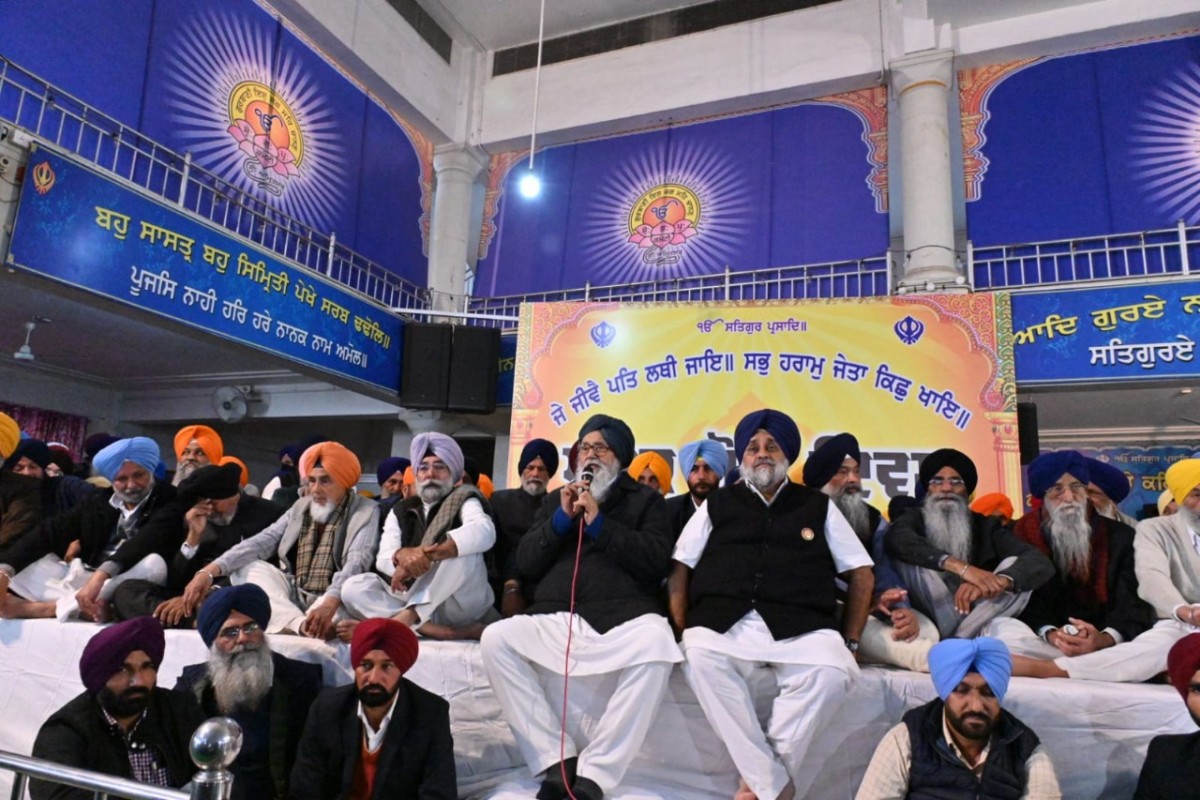 Commenting on Sukhbir’s statement, Pal Singh Nauli said that Sukhbir Badal should first answer why they joined hands with BJP, which demolished the Babri Masjid.

“They also remained silent on the Babri Masjid judgment, the reading down of Article 370, the Citizenship Amendment Act, the now repealed farm laws. This shows how Akalis supported attack on the federal structure of the country whereas they had been demanding more power to states under Anandpur Sahib Resolution.”

Jagtar Singh added, “Sikhs had purportedly ‘avenged’ Operation Blue Star by killing former Prime Minister Indira Gandhi. However, immediately after the killing, the narrative of the ‘Panth under attack’ was revived in November 1984.”

Jagtar questioned the role of Akalis and said, “During the 1996 Lok Sabha Elections as SAD president Parkash Singh Badal had promised a judicial probe in the Sikh killings in its election manifesto. But in August 1997, when Badal was questioned about his promise of judicial probe, he refused stating that he does not want to open old wounds. The Akalis should have exposed the Congress and taken action against it but that was not the case.”