As Administration Drifts, Governor's Role in Tamil Nadu's Crisis Comes in for Criticism 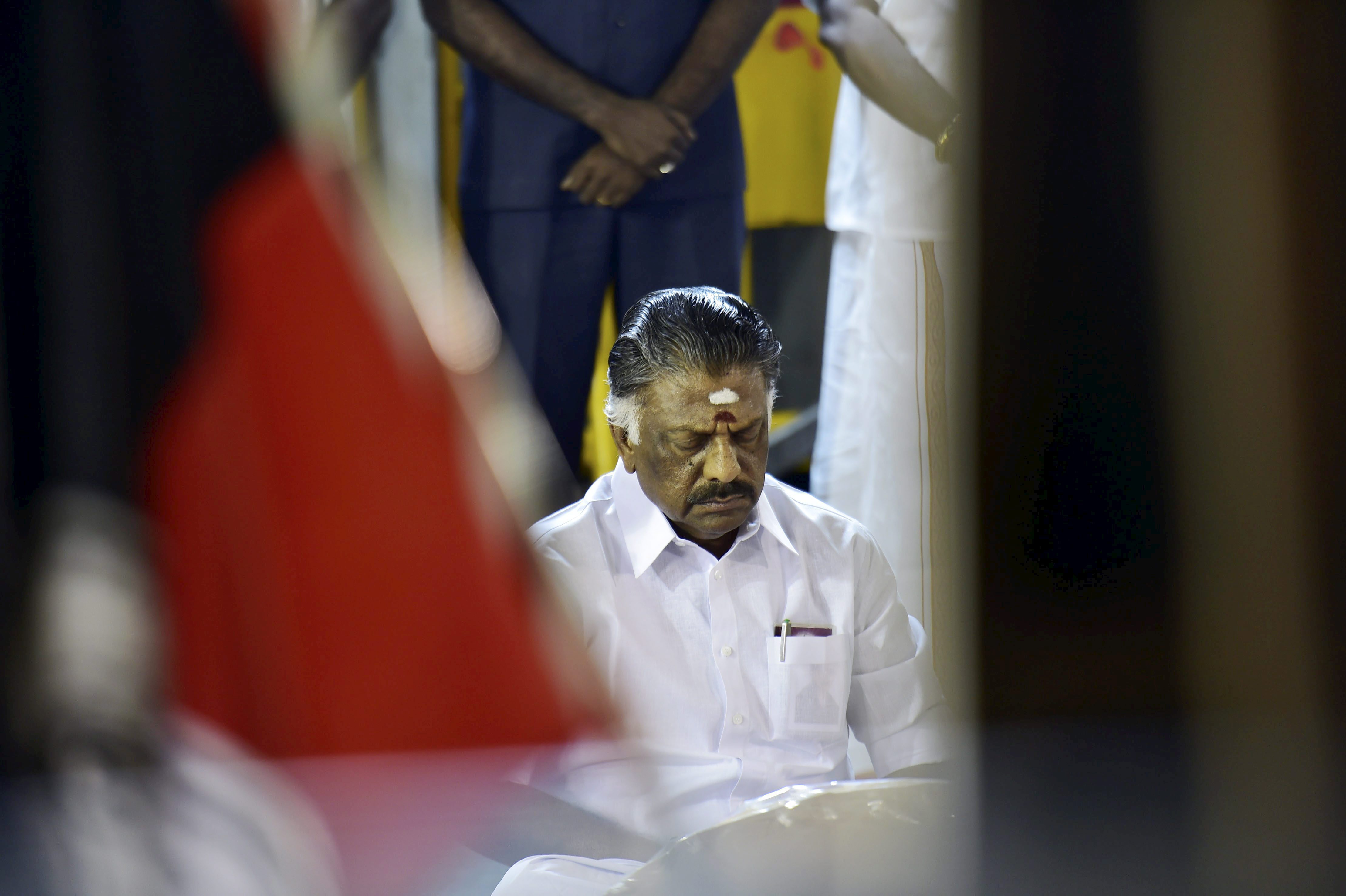 Chennai: Tamil Nadu Chief Minister O Panneerselvam sitting in a meditation in front of late J Jayalalithaa's burial site at the Marina Beach in Chennai on Tuesday. On Sunday, he tendered his resignation from the post paving the way for AIADMK General Secretary V K Sasikala to become Chief Minister. PTI Photo by R Senthil Kumar(PTI2_7_2017_000261B)

Chennai: Tamil Nadu, not a state generally known for political instability, is in turmoil. A chief minister has resigned and been asked to continue as a caretaker administrator till alternate arrangements are made by the state governor. But suddenly after two days, the same chief minister claims that he was forced to resign and says that he will take back his resignation if people want him to do so.

Of the 134 ruling  party MLAs, 130 attended a meeting called by AIADMK general secretary V.K. Sasikala and assured their support to ‘Chinnamma’ (as Sasikala is being called in the party). Later they were all taken in two luxury buses to an unknown destination ostensibly to scuttle poaching from chief minister O. Panneerselvam’s side.

The most crucial player in the whole drama is governor Ch. Vidyasagar Rao, who, apart from being the governor of Maharashtra, holds additional charge for Tamil Nadu. With the state in a deep mess the governor is nowhere to be seen. In fact on February 5, when the AIADMK legislature party elected Sasikala as their new leader the governor was very much in the state, in the hill station of Ooty. But after the news broke, he rushed to New Delhi via Coimbatore. BJP sources said that this was a scheduled trip as the governor was to attend a wedding reception of a family member of a union minister. But even after the reception too the Governor did not return to Chennai but went back directly to Mumbai. In fact,  the governor’s scheduled programs in Tamil Nadu on February 6 were cancelled.

In the whole drama unfolding in the state, the behaviour of the governor is slowly but surely emerging as both very negative and disturbing. Why should the governor be away from a state for which he is an administrator especially at a time when that state is afflicted with political instability? Why can’t the governor interact with all the stakeholders? Why can’t his office issue statements about the latest developments?

“This is very disturbing. I am not able to understand the behaviour of the governor. A chief minister resigns, his resignation was accepted and he was asked to stay back as a caretaker CM by the governor. Suddenly after 48 hours the caretaker chief minister in full media glare declared that he was forced to resign and also announces that he will take back or withdraw his resignation if people want him to do so. There is not a single word from the governor. I am very puzzled” said a retired high court judge to The Wire. The judge who declined to be quoted by name, added that the governor’s behaviour was actually adding to the political turmoil. The AIADMK has elected its new leader and that leader is now waiting for an opportunity to meet the governor and stake her claim to form the government. But his absence   is bound to generate anger in the ruling party, which is understandable.”

“Just look at what is happening. No governor, no chief minister. The state administration has virtually come to a grinding halt” said retired IAS officer and former additional chief secretary of West Bengal G.Balachandran.

“When a huge political crisis is engulfing Tamil Nadu there is a deafening silence on the part of the governor. By not fulfilling his constitutional obligations the governor is actually failing in his duties and this is unfortunate. If the impending judgment in the assets case against Sasikala which is expected from the Supreme Court next week is the reason for the governor’s behaviour, then he should say so openly,” Balachandran said.

Interestingly, the behaviour of the governor has attracted strong criticism from the BJP too. BJP MP Subramanian Swamy has appealed to  President Pranab Mukherjee to sack Rao.  “What kind of a governor leaves the state he is in charge of when it’s in the middle of such a crisis”, Swamy is quoted having told reporters in Delhi.

With the government virtually in limbo, observers feel this could not have come at a worse time for Tamil Nadu. “Usually the months of February and March are very crucial for any welfare activities in the state. During this period the remaining instalments of budgetary allocations are released to various departments.The government does stock taking of the progress of various schemes and plans for budgetary allocation for the next year. Now that has been affected and you will see the consequences of this in the next fiscal,” warned Balachandran.

Meanwhile, latest reports suggest that all the 130 AIADMK MLAs who were shifted to an undisclosed destination in Chennai are likely to be taken to New Delhi in a chartered flight to meet the president to demonstrate their support for Sasikala.