Acts of God and the Follies of Men

For the Modi government, both God and the Constitution have become legal fiction. 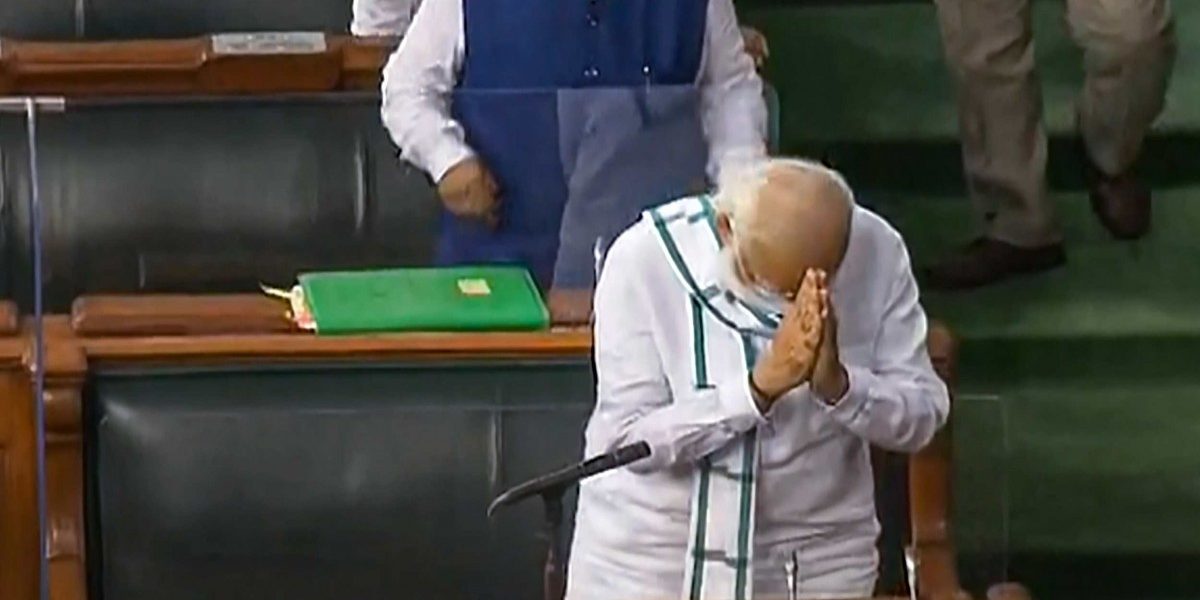 A ‘legal fiction’ is an idea or a concept which doesn’t actually exist in fact, but is mandated to exist by law or convention or belief for the larger good of mankind. Some important examples of legal fiction are the rule of law, justice, human rights, democracy and social equality. They don’t exist in the real world but we are led to believe that they do, for they are essential for an orderly, stable society: without them we would descend into chaos.

In recent days in India, even the Constitution appears to be a legal fiction. God too is a legal fiction. He doesn’t exist (at least not to the satisfaction of science) but it is important to believe that He does, for a pious and stable society. But this is one fiction that the BJP-RSS combine has exploited to the hilt and used to come to power like no other political outfit has done before or after.

The Ram Mandir movement and the construction of the temple in Ayodhya is the best example of this. (This was in fact an instance where two legal fictions coalesced to serve the BJP’s purpose – God and justice, the latter in the form of the inexplicable Supreme Court judgment on the matter which laid low the hopes of one community but raised a certain judge to parliamentary heights.)

But fiction is something the ruling party is comfortable with, since practically all its vaunted achievements and promises are nothing but fiction, if not fantasy: economic growth, a $5-trillion economy, eradicating the pandemic in 21 days, making India a vishwaguru, leading the world in climate change reforms, providing ten million new jobs a year, eradicating black money, uniting the nation and revolutionising the tax structure with the Goods and Services Tax.

There are more such creative chimeras, but these should do to illustrate my point, which is that our present dispensation has erased the distinction between fact and fiction. Including the distinction between its own actions and the actions of God. The official confirmation of this was the recent statement of our finance minister that our horrendous economic slump of -23.9% was “an act of God” and that therefore the Centre was not bound to pay the GST dues to the states. Actually, the Act of God too is a legal fiction!

Also read: Avoiding a Lost Decade: How Do We Go From Global Pandemic to Prosperity For All?

Now, Sitharaman is a deeply religious person: she doesn’t eat onions, her quotations from the ancient classics are far more authentic than her Budget figures, and she believes that the mythical Saraswati river is as real as the “green shoots” of the economy – the only problem being that only she can see these chimeras, no one else. So what are we to make of this blasphemy from a devout lady, who otherwise has very little in common with that other great believer, Diego Maradona of the “hand of God” fame. But Maradona at least had won his match, whereas our finance minister seems to be losing hers.

Her Delphic statement has befuddled political commentators and economists, who in any case are not known for their clarity of thinking. Even rampaging TV anchors have taken their eyes off Rhea Chakraborty and Kangana Ranaut to decipher this observation. Does it mean that Narendra Modi has been finally elevated to Godhood, since it is only thy hand, Great Anarch, that can conduct this orchestra of despair and perdition? Or is it a final admission of sovereign fraud, the state joining the ranks of Vijay Mallya and Nirav Modi, to deny us what is rightfully ours?

Sitharaman also did not explain the obvious paradox in her claim about this act of God: how is it that a Hindu God inflicted such punishment on his own peoples, or conversely, why is a Hindu nation blaming its own God? This quandary brings to mind that immortal verse by Ogden Nash:

“How odd of God
To choose the Jews,
But odder still are those who choose
A Jewish God and spurn the Jews!”

A similar confusion appears to prevail here, but maybe it can still be clarified in this session of parliament. I am aware that we no longer have the Question Hour, since there are no answers left, but perhaps the matter can be taken up suo moto in the manner of contempt cases. After all, we now have a retired (or is it retreaded?) Ranjan Gogoi to advise the government: Show me the God and I’ll show you the rule.

For it is apparent to anyone who does not swear by banana republic channels that Sitharaman and her capo are fast losing the plot, not by acts of God, but by Acts of parliament and acts of sheer arrogance: the CAA, the NRC, the NIA, GST, UAPA, demonetisation, the lockdowns, the Rs 20,000 crore for the Central Vista project, the enforced migrant exodus, the Rs 2,000 crore budget for the 2021 Kumbh Mela, the Bullet train which is already a spent bullet – all while the bottom has been knocked out of our economy, the dragon is comfortably curled up on our northern borders, and we will be celebrating this Diwali by becoming the global number one in the “Ease Of Getting Infected” chart, all set to overtake the US in the coronavirus hit parade.

Economists have had to invent a new revival diagram for us, we are told that the Indian economy is likely to have a K-shaped curve for its recovery, the two diverging prongs from the perpendicular indicative of the massive inequality that will result. This K-shaped curve will in future times be known as the Kedarnath curve, where the Supreme leader, meditating in a Himalayan cave, will levitate to transcendental heights along with his jhola and a few A-lister corporate buddies, while the suckers like you and me (the lower prong) will plummet to the depths of bankruptcy and ruin. This, in essence, is the K curve. To misquote Winston Churchill: Never have so many given away so much to so few.

But elections still have to be won. The time for taking credit is over, it’s now time to pass the buck. The gods can be appeased later, perhaps when the Ram Mandir is consecrated or Kashi and Mathura brought into the fold, but right now it’s blame game time. The banking system is about to collapse with a possible further moratorium on Rs 40 lakh crore of outstanding loans, the states may start retrenching employees and cutting back on pensions and salaries, 23 million salaried jobs have already been lost. Elections are due in Bihar and Bengal and somebody has to carry the can.

And so the government and the BJP are upping the blame game ante. They had begun by blaming the Mughals, then the British, graduated to the Gandhis (the poor unoffending Mahatma included), moved on to Manmohan Singh and finally settled on Jawaharlal Nehru. But there is only so much earth you can pile on to a person who has been dead now for half a century, and with the mess piling up faster than you can say “Holy shit!”, some other scapegoat was needed.

What better than a celestial scapegoat cloaked in unchallengeable divinity, to whom no Question Hour applies, a legal fiction which cannot be questioned on pain of a jail term? Yes, sir, blame it all on acts of God. And when the good times (and the GDP growth) return, conflate that God with one individual, redact the earlier statement, and roar “Hail to the Leader!” But what if the good times are in no hurry to return? Who does one blame then? Well, there’s always the Holy Ghost.