If you only looked at the prime minister's Twitter timeline, you would have no idea about what is happening in the country. With over 42 million followers on Twitter, 43 million on Facebook and 13 million on Instagram, it wouldn’t be an exaggeration to say that Prime Minister Narendra Modi is the most popular Indian politician on social media.

Soon after winning the 2014 Lok Sabha election, the UK’s Financial Times labelled him “India’s first social media prime minister” — a tag that Modi and his bhakts have flaunted numerous times over the past four years, especially while comparing him to his predecessor, Manmohan Singh, whose lack of public communication became the butt of jokes.

However, Modi’s ‘MaunMohan’ jibe has come back to bite the prime minister. While campaigning for the 2014 Lok Sabha elections, the then Gujarat CM often mocked Singh for his infamous silence over allegations of corruption in his government.

. @narendramodi – I was happy Dr. ‘Maunmohan’ Singh said there is development but added money was from Delhi. This is an insult.

That was then. Four years later, the reality is very different. Our loquacious prime minister has gone quiet. Unlike his predecessor, Modi hasn’t addressed even a single press conference and prefers to only give tame interviews.

Like Manmohan Singh, Modi the prime minister has remained conspicuously quiet about issues that make his government look bad. While he is quick to wish his foreign counterparts on their birthdays – and express condolences after minor attacks in their countries – Akhlaq’s brutal lynching, people who lost their lives waiting in queues after demonetisation, cow vigilantism, the Una lynching, the brutal rapes in Kathua and Unnao and many other incidents didn’t make the cut.

Predictably, the prime minister has maintained a stoic silence on the police firing in which 12 people protesting the Sterlite unit  in Thoothukudi were killed on May 22. People in the coastal Tamil Nadu town  have been protesting for over 100 days, claiming that the unit is polluting the environment and has resulted in illnesses.

In the wake of the Thoothukudi protest and tragedy, which failed to stir Modi to take to Twitter, we decided to check his Twitter timeline to see what he has been up to in the past 100 days. Apart from the routine birthday wishes and party political propaganda, these tweets stood out: 2. While students across Maharashtra were protesting in February, the PM was busy some 1,300 miles away inaugurating a temple. 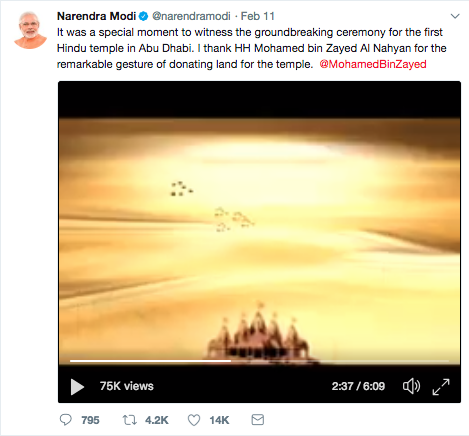 Perhaps Modi said a prayer for students who have been waiting for years to give the Maharashtra Public Service Commission exams. 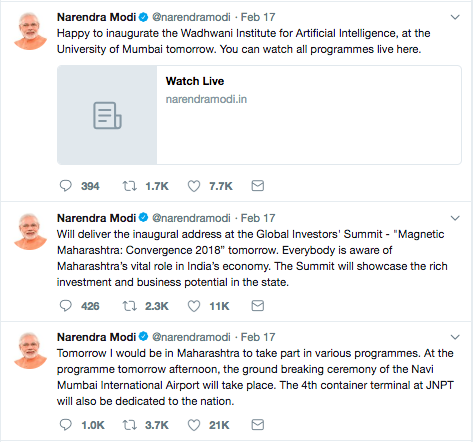 3. While the PM talked about moving forward with investor summits, technology and artificial intelligence, a BJP leader in J&K waved the tricolour at a rally to support men accused of brutally gang-raping and killing an eight-year-old in Kathua. 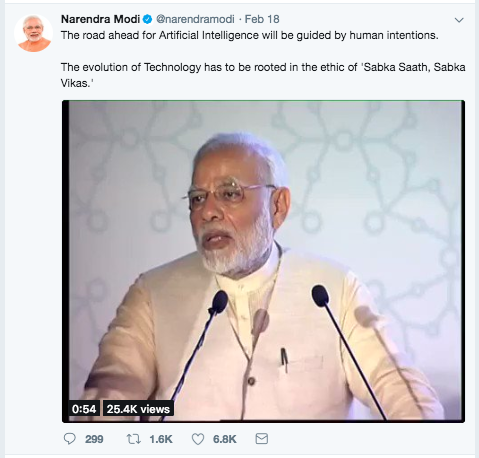 4. As the PM was busy taking a dig at the Congress government in Karnataka for ignoring the plight of farmers in the state, farmers protesting acquisition of their land in Modi’s home state didn’t get a chance to share their ‘mann ki baat‘ with him.

5. Transparency and accountability are vital in democracies, claims Modi, while shady encounters continue in Uttar Pradesh under Yogi Adityanath. 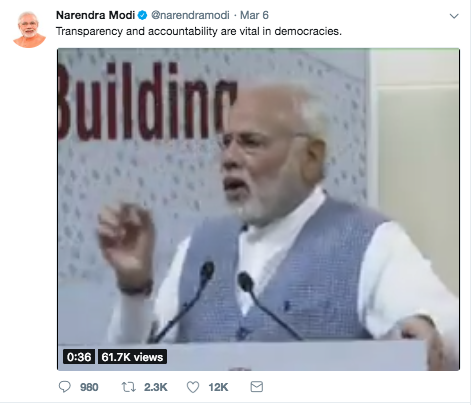 The encounter raj in UP does not just violate human rights but also all canons of justice, and does not follow the due process of law. 6. As he applauded ‘nari shakti‘ on International Women’s Day, one wonders why despite enjoying a majority in the Lok Sabha, Modi’s government still hasn’t passed the women’s reservation Bill.

Meanwhile, women attending the March 8 event in Rajasthan found the prime minister’s words didn’t quite match the arrangements made for them. The makeshift toilets for women at the venue had no doors, no flush and no water – so they were basically useless, reported Shruti Jain.

7. While, he has instructed civil servants to use social media only for public welfare and not self-praise, Modi often interacts with his followers by replying to their complimentary tweets. 8. He subtly plugged his personal app, which has been installed by over 5,000,000 people on Android alone. (Note: If you have signed up for the NaMo app, your personal details are being shared with or without your consent.) 9. He shared his speech from the Indian Science Congress but forgot to comment on a few things: Why the event was suddenly shifted from Osmania University to Manipur University after the death of a Dalit student at the former; and why the Dalai Lama’s invitation to the event was cancelled. 10. Two days after Gorakhpur district magistrate attempted to prevent mediapersons from reporting from a counting centre when early leades showed the BJP trailing in the recent by-polls, the prime minister spent an evening in Delhi talking about how India has risen. 11. On March 30, the PM asked his young friends “to work on innovations that transform the lives of 125 crore Indians”. A day later, a BJP-ruled state accorded minister of state (MoS) status to five religious leaders. 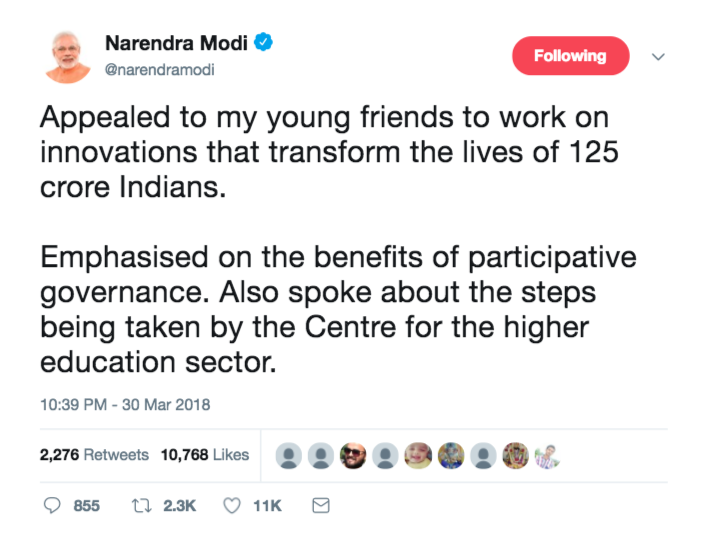 Spoiler alert: These five men were not appointed to a committee set up for the Narmada river conservation because they are experts in the subject.

Begin your week by practising Vrikshasana. Apart from other benefits, this Asana improves concentration and reduces back pain. #4thYogaDay #FitIndia pic.twitter.com/AAkveX7dJ6

A lot of yoga.

13. The PM also paid tribute to Jagjivan Ram, but we couldn’t find a single statement by Modi on the sporadic incidents of communal violence in Ram’s home state, Bihar. 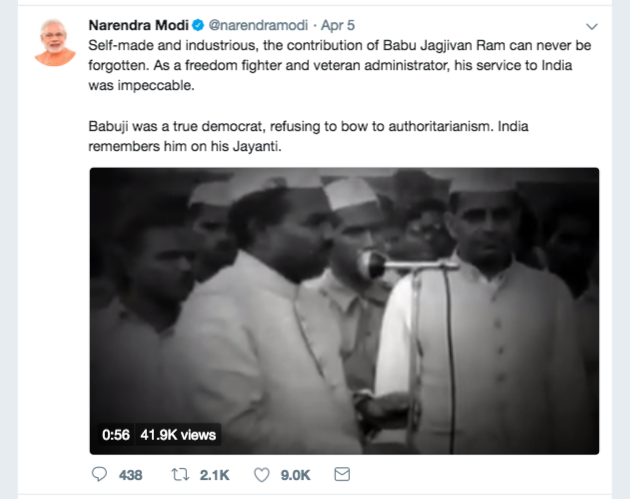 At least nine out of the Bihar’s 38 districts have been affected by communal violence.

14. The pradhan sevak lauded the BJP’s cadre on the party’s ‘Sthapna Diwas’. “The BJP is the party of a New India. We are privileged to receive the blessings of people of all age groups, across all sections of society. We are a Party that believes in India’s diversity, our unique culture and, above all, the strengths of 125 crore Indians!,” he tweeted. 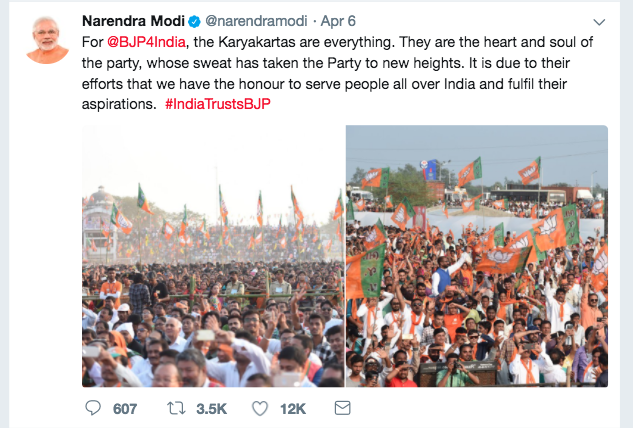 However, he forgot to reprimand them for routinely making communal remarks or brandishing swords and waving saffron flags at mosques (as they did during a bike rally in Delhi).

15. He gave advice to his ‘election warriors’ on how to remain calm.

This is what I told Mamta, a BJP Karyakarta belonging to Delhi, who wanted to know how I managed to keep calm in the midst of a busy schedule. Mamta also wanted me to share a message for all booth-level workers, whom she described as ‘Election Warriors.’ pic.twitter.com/MQ15LngQtj

16. Recent communal incidents around the country making you angry? Don’t worry! The PM has a solution for that too – yoga for a healthier body and a calmer mind.

Making Padahastasana a regular part of your lives will make your body healthier and your mind calmer. What more can one ask for! pic.twitter.com/eOe5SxybHV

17. He shared multiple videos and photos from the Defence Expo in Chennai, but not a single mention of how he was welcomed by the city. 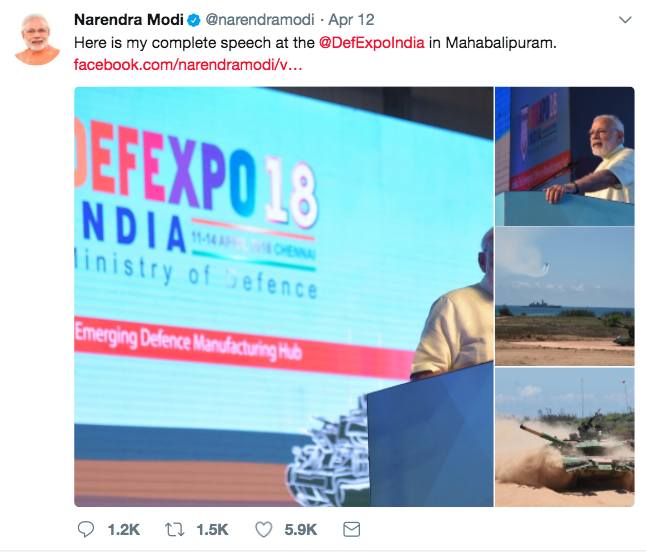 18. Similarly, while the 100% electrification announcement and achievement are significant, Modi conveniently forgot to read the fine print. Anuj Srivas and Noor Mohammad explain why even though 100% electrification of villages has been achieved, government data shows that as of today, there are still 31 million households without electricity.

19. The PM spent most of May campaigning in Karnataka, highlighting the Congress government’s questionable dealings but we are still waiting to hear from him on Union minister Piyush Goyal’s business dealings with Piramal group, which were exposed by Rohini Singh on The Wire. 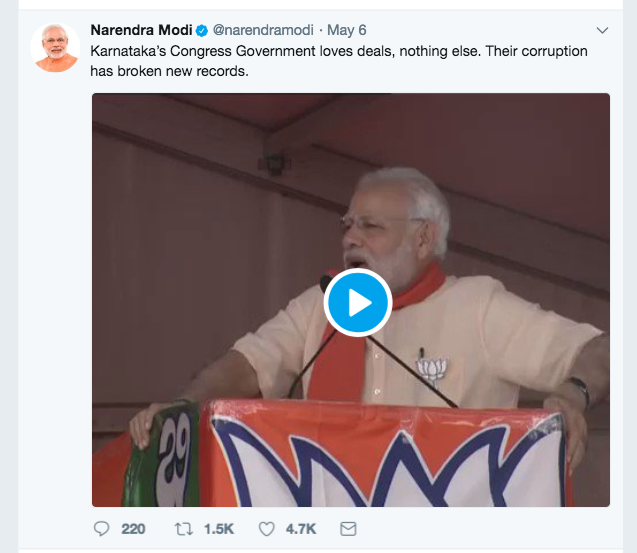 20. While Modi expressed anger over the culture of political violence being cultivated by opposition parties, he omitted a small detail – the BJP fielded the highest number of candidates with a criminal record in Karnataka elections.

Meanwhile, Indian citizens are still waiting to hear from the prime minister on increasing fuel prices, the Karnataka governor’s attempt to subvert democracy, the killing of protestors in Thoothukudi by the police, why his government helped Vedanta’s Sterlite plant bypass environmental norms, why Delhi University is trying so hard to keep his degree under wraps, and much, much more.