AAP: Soft Hindutva or a Bulwark Without Illusions?

It is necessary to critically analyse the secularist critiques of AAP's victory. 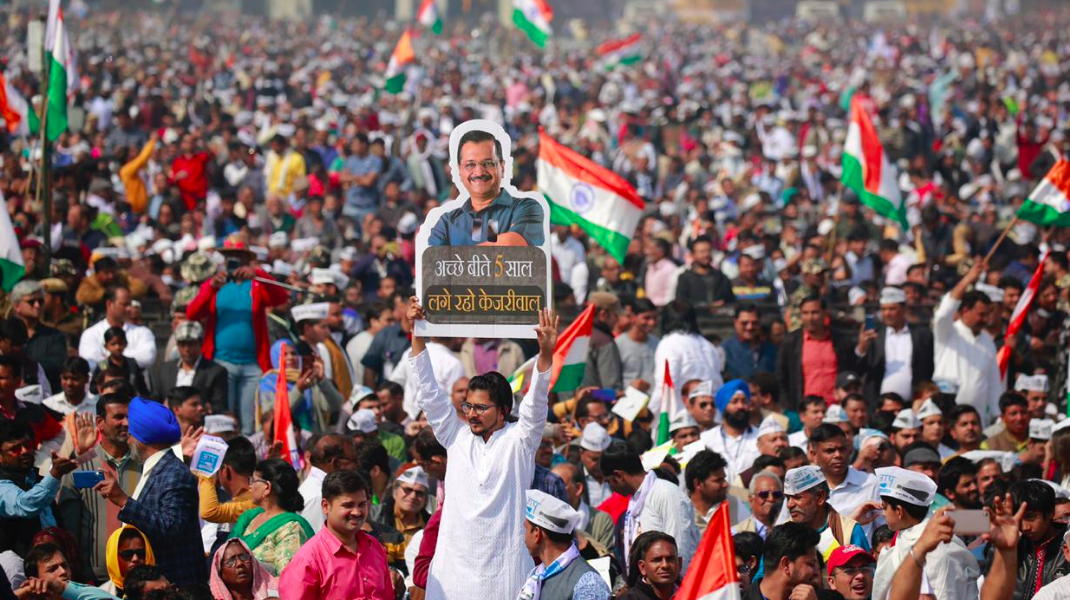 Following the victory of the Aam Aadmi Party, there have been many criticisms from a secularist perspective that have been made against Arvind Kejriwal and AAP for basically “working around the boundaries set by the Hindu nationalists” and embracing a “softer version of their politics,” or pursuing a “pragmatic self-preserving electoralism” which is “dangerous in its complacency” towards BJP’s majoritarianism.

Even as there are elements of truth in these contentions, it is also necessary to critically analyse them.

Any understanding of the limitations, and even the possibilities of AAP as a political formation will have to reckon with the structural context in which it operates.

Now, as the critics allege, to celebrate the AAP victory as a decisive defeat of Hindutva is of course grossly misplaced. Yet, to believe that there would be no difference between an AAP victory or BJP victory, ideologically, in terms of its impact on secularism, or the state of minorities, especially, Muslims, is to see politics as a zero-sum game.

Or, it is to crave for a purity in politics that does not exist anywhere in reality.

The first thing that has to be acknowledged is the unprecedented nature of AAP’s victories in Indian political history: a party winning above 90% seats in back-to-back elections. The present victory is especially coming after five years of blatant hostility by the central government, when the BJP is still strong nationally, its Hindutva agenda at its most dominant, and when the popularity of Modi is hardly affected by Kashmir or CAA. 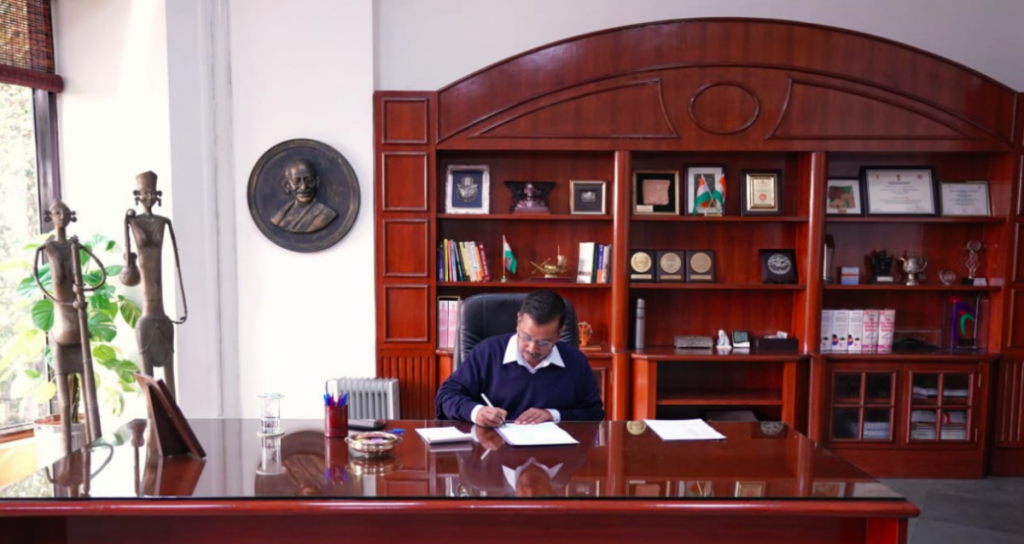 Arvind Kejriwal at his office after assuming charge for the third time as Delhi CM. Photo: Twitter/@AamAadmiParty

Further, crucially, in terms of financial resources, the capture of institutions and the unprecedented control of media, a contest between BJP and the AAP is spectacularly mismatched.

And the fact that the BJP still threw everything it had in the ring, and not just through the most odious and dangerous kind of communal polarisation, only goes to show how crucial this election was for it, and post-facto, proves how significant its defeat is. If there was a moment to pursue short term electoralism to defeat a rampaging majoritiarianism, even if temporarily, it was this.

The flaw in the critics’ position is not that what they are asking from Kejriwal and AAP in terms of a strong secularist stand is in anyway theoretically problematic, but that the demand that is made glosses over a long-term understanding as well as the practical context.

And this is practical context is one in which there is already a “people” constituted, in nationalist and Hindu majoritarian ways, over decades of ideological and pedagogical training even before Hindu nationalism formally captured power. It is impossible to assume that this electorate will dramatically change their political views to radically adopt critical positions, on say, nationalism, Muslims, and Kashmir.

Propertied members of resident welfare associations, or those who are still in thrall of the diktats of khap panchayats do not fundamentally alter their worldview when they vote for AAP. That is why you see at least one-third of the electorate who vote for AAP and Congress in the Delhi assembly elections, shifting, without any ideological dilemmas, to vote for Narendra Modi in Lok Sabha, even when these choices have significantly different effects on the minorities.

The critique of AAP cannot made in a vacuum and without understanding the conditions that have given rise to Modi and the most virulent form of Hindutva. Even as we demand that the AAP take maximalist secular positions, it is vital to do so in the context of the spectacular failures of other parties, including Left parties, in the construction of a “secular” Republic over 70 years.

Mayawati’s enthusiastic support for the reading down of Article 370, and lukewarm resistance to CAA, and the Left’s softer stand on Sabarimala after the election defeat in Kerala are reminders of the immense challenges faced by even the most ideologically oriented political formations in India (which are also opposed to Hindu nationalism).

Of course, we cannot only electorally herald secularism without it having resonance in the wider civil society and in our everyday lives. To place that responsibility on AAP, a post-ideological populist party, when every other political party has turned into political machines which have staked everything at the altar of electoral politics and state power, is transposing the theorists’ wish list onto the practitioners of messy politics.

Interestingly, the critiques of AAP from a purist perspective are not new at all. They have existed right from its beginning in the India-against-corruption movement: that it is ideologically Hindu majoritarian, and that economically too, it is on the right, with its technocratism and neoliberalism. 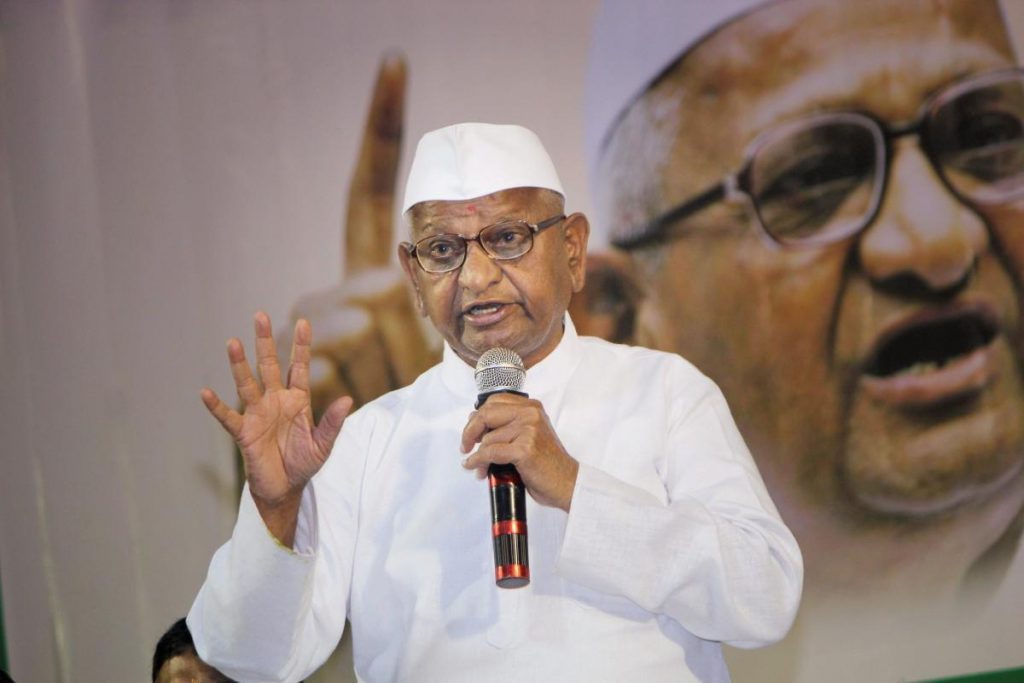 But what is significant is to recognise the various transmutations that it has undergone since then.

Thus, from being courted by business interests to banning FDI in retail in Delhi and briefly taking on Indian big capital, from embodying orderly and technocratic rationality to briefly becoming an “anarchist” and chaotic force more interested in cantankerous street politics, from being governed by urban middle class interests to drawing a pan-class support, especially of the poor and working classes, from viscerally challenging the persona of Narendra Modi to completely avoiding it, from basically being propelled by big television media to being demonised by it, from a social movement opposed to politics to a political party with undesirable concentration of power in its leader, etc., there are more contradictions on display.

And for a party accused of pandering to soft Hindutva, Kejriwal, to the consternation of Hindutva supporters, very recently claimed that “we have tried to run the government on the path shown by Jesus Christ.”

More importantly, for the technocratism that characterises the AAP government it has also adopted a Universal Basic Income approach, and posed some “challenge [to] the neoliberal logic of privatisation” in health, education, water and electricity. In times, when profit has become the only buzzword in market-led societies, it is progressive to talk about government schools, and public goods, especially in a context like that of India with its abysmal human development indicators.

The importance of AAP in Indian politics is that it is the only new political formation in a long time to break the gridlock of electoral machinery controlled by money and personnel power without mobilising on the basis of caste, religion or ethnicity. Of course, the uniqueness of Delhi as a city-state has also helped this.

Ultimately, even when we recognise the people’s ideological encrustations, we cannot seem them in a reductionist fashion. Otherwise, there will be no scope for social change. Simultaneously, the struggle for social change, and the construction of a new people is a long drawn out one contending with many unpalatable realities.

The critical factor in AAP’s victory has been an unprecedented 60% of women (compared to 35% for the BJP) voting for it. And despite the hegemony of Hindutva, Ram Mandir, Kashmir, CAA, Shaheen Bagh, etc., only 7% of voters were motivated to vote on these issues. Can these small openings turn into a sustained critique of Hindu nationalism and majoritarianism?

The critical question is this: is a focus on governance and development, by skirting vital political issues, or addressing fundamental divisions in society, sufficient to counter a dominant Hindutva nationally and in the long run?

Can the people’s “common experience” of doing development differently, as Aditya Nigam contends, change the “terms of the narrative itself” and herald new possibilities against Hindutva, or is it that egregious technocratic measures like surveillance cameras in government schools cannot hope to build citizens capable of upholding the values of the Constitution?

It is important to focus not only on AAP’s position on secularism, but also on the worrying transformation of the AAP in other areas.

For a party that has been supported by an overwhelming percentage of Dalits, and substantial numbers of OBCs in 2015 and 2020, its leaders and representatives have been dominated by upper castes. Similarly, despite the tremendous support of women, only around 13% of the elected MLAs are women.

More appallingly, for a party that claims to represent the “common man” and novel ways of politics, there is a drastic change in the nature of its representatives. As many as 53% of its current MLAs have serious criminal charges against them (even more than the BJP), and 73% of its MLAs are crorepatis, with average assets of MLAs being Rs. 14.96 crores (more than BJP MLAs’ Rs. 9.10 crores).

Thus, the critique of AAP’s secularism, or the lack of it, has to be again placed in this structural context of the seemingly inescapable claws of the larger political system, which is not only about what Satish Deshpande calls as the BJP’s “unchallenged monopoly over agenda-setting.”

It is vital to be clear that the Aam Aadmi Party is not going to herald any revolution.

At the same time, in the context of an unprecedented capture of the state by Hindutva forces, and a political and social discourse saturated by unbridled hate for Muslims, it is equally vital to recognise that drawing the conversation back to health, education, water and electricity has more critical resonance than in ordinary times, and that a party that comes to power on the basis of the support of 83% Muslims is not ideologically the same as a party that seeks to rule on the basis of a toxic exclusion of the Muslim citizen.

An elaboration of some of the arguments in the article can be found in the author’s paper, The ‘People’ and the ‘Political’: Aam Aadmi and the Changing Contours of the Anti-Corruption Movement, in Rise of Saffron Power: Reflections on Indian Politics, edited by Mujib Rahman, New Delhi: Routledge, 2018.