Amidst a Resignation and Anti-Incumbency, It's Hard to Miss AAP's Surge in Punjab

This journalist's travels in 15 of Punjab's districts shows the growing popularity of AAP in key regions. 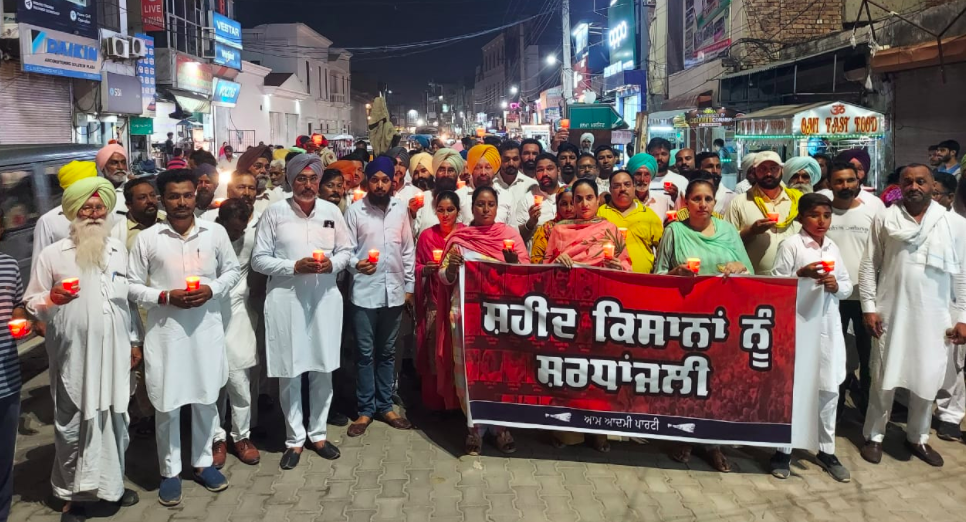 An AAP demonstration against the farm laws in Punjab. Photo: Twitter/@AAPPunjab

Captain Amarinder Singh’s resignation from the post of Punjab’s chief minister came as a surprise to many, and the development has set a flurry of debates.

Many experts – most based in Delhi – are leaving no stone unturned to prove how the Gandhi siblings have destroyed the party’s prospects in the state by letting go a “rooted leader” like captain.

However, most analysts based in Punjab have a different take and a majority of them, in fact, consider captain’s exodus a good riddance. This adds to the confusion as to whether Captain Amarinder Singh was an asset or a liability, and whether Congress under him was set to win Punjab again or not.

A qualitative survey undertaken in the second half of August 2021, across 15 of 22 districts of Punjab covering all regions, tries to put these questions in perspective.

Anti-incumbency, the CM and AAP

“Both Congress and Akalis have looted Punjab for 70 years, we want a navee sarkar (new government) now,” say a group of Jat farmers sitting under a tree amidst lush green paddy fields in a village of Patiala district.

What they mean by navee sarkar is a government by the Aam Aadmi Party.

“But Patiala is Captain Amarinder Singh’s stronghold?” I say.

“Captain is a king, common people don’t matter for him, he has done nothing and we will show him the door this time,” is the unanimous reply.

“Whom did you vote for last time?” I ask.

Some say they voted for Congress but a majority profess to having been Akali voters. “But this time we won’t vote for the Akali Dal. All of them are thieves and take turns to rule. We need change.”

The reply that I got from these respondents in Patiala reverberated across the length and breadth of Malwa region, politically most significant in Punjab. But the category of respondents kept changing – from Majhabi Sikhs to Ravidasis and Valmikis, from Hindu voters to Sikhs, from farmers to the labourers, from shopkeepers to salaried people.

A range of issues came up when I enquired about their reasons for rooting for AAP. “Punjab produces electricity, but electricity rates are so high here, varying from Rs 7 to 12 at various places. Kejriwal is giving free electricity in Delhi, we also want that,” was a recurring reply from many respondents across Punjab. Some said they were fed up of the corruption of Congress and Akalis, while many praised the leaders of AAP.

“Look at Bhagwant Mann, he is an MP from AAP, yet walks around without security. Have you seen even a small politician in Punjab doing that?” a respondent at Barnala tells me. That Mann is a very down to earth person and should be made chief ministerial candidate by AAP is something that most of the respondents who were supporting AAP said. 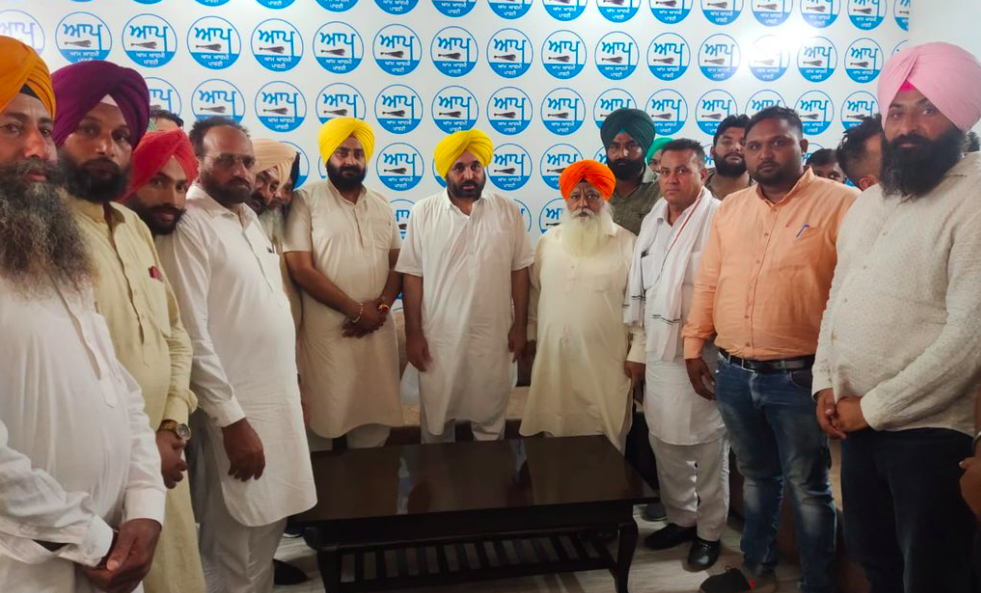 At a busy circle in Sangrur, a group of youth are holding a protest. They are physical training instructors.

“In last 15 years, no government recruitment has been carried out for us though posts in schools are lying vacant. Generations of qualified PTIs in Punjab have become aged now, what can we do other than protest?” says Samsher Singh of New PTI Union.

I ask what they think of the past two governments and they are clear – Congress is slightly better than Akalis in terms of recruitment, but that’s not enough to meet the scale of unemployment in Punjab. And when I ask whom will they vote for this time, almost all unanimously say they will vote for AAP. “We have come from different districts of Punjab to protest in Sangrur as it is education minister Ravi Inder Singla’s constituency. In our respective districts, AAP ki hawa hai (AAP is riding a wave),” Singh says.

That AAP has a wave is quite clear in Malwa. What is further adding to AAP’s rise is the disappointment of SAD voters. Feeling that SAD is less suited to win this time and to prevent Congress from winning, common SAD voters are shifting significantly to AAP in Malwa. And though Hindu voters are divided between Congress and AAP, AAP is being praised a lot by them too.

“Malwa was a stronghold of AAP last time too, but this time a large section of Akali voters is shifting towards them in Malwa. They think Akalis have become very weak so there is no point in voting for them and they want to defeat Congress,” says Jagdish Kali, a journalist and political analyst based in Jalandhar.

Since the Akali vote percentage used to be quite significant in Malwa, if a good portion of that shifts to AAP, then it will sweep the region. Many respondents say they voted Congress last time but will vote AAP this time. This is further exacerbated by the fact that many Congress stalwarts of Malwa like Gidderbaha MLA Raja Warring, Sangrur MLA and education minister Vijay Inder Singla, Bathinda Urban MLA and finance minister Manpreet Badal are facing acute anti-incumbency.

BJP, farm laws, anger and the war of perception

Across the villages (called pind in Punjabi), a common sight is Bharatiya Kisan Union flags on rooftops.

On roads and highways, vehicles with BKU flags or with posters saying, “no farmers no food” are not difficult to spot. At a Reliance Petrol pump in Mansa district, I see a group of farmers at a sit-in protest and ask them about the issue.

“All company-owned petrol pumps of Reliance have been closed down by farmers, and all tolls on highways are also free now,” says the leader of the group, Vikramjeet Singh, associated with BKU Ugrahan.

“We believe that the three anti-farmer laws brought forcefully by BJP government at the centre were meant to benefit Reliance and Adani, and so we will not let them operate in our region till these are repealed.” 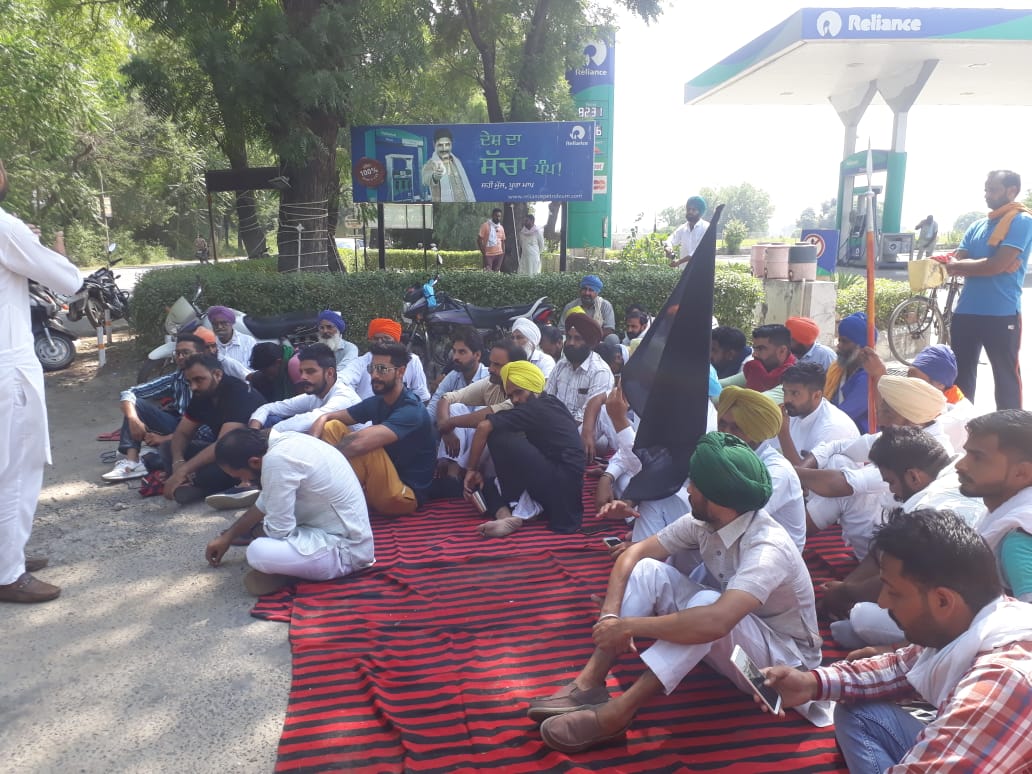 This level of political consciousness and resistance to BJP is not limited to farm leaders, but common farmers in Punjab also seem convinced by it. The level of opposition is such that I could not see any BJP flags in rural Punjab except in some parts of Pathankot district. All farmers I talked to criticised the party.

“BJP is over now in Punjab,” was the common statement. At many places, even BJP leaders agree its not possible for them to campaign in rural areas of Punjab anymore. It is because of its prolonged association with BJP that the Akali Dal too is distinctly out of favour with Punjabi farmers.

However, the farmers’ anger and resistance to BJP is not helping Congress as much as one would think. Despite the fact that Rahul Gandhi has publicly joined the Farmers parliament at Jantar Mantar and demanded the repeal of farm laws, the party has failed to communicate that it is firmly against the farm laws. Rural Punjabi voters think this is just a gimmick.

The recent hike in sugarcane MSP announced by the Punjab government after protests by farmers has not been publicised in rural areas either.

AAP, on the other hand, is far ahead in this game of perception. The party has worked hard to project that it has helped farmers sitting on the Singhu border. “Congress only talks, look how Kejriwal helped us at Singhu with free water and electricity,” said a group of farmers in a village in Tarn Taran district.

They say that Captain Singh has largely failed to communicate a clear support for the protests and would even favour PCC president Navjot Singh Sidhu over him.

But is AAP ready?

While AAP seems to be sweeping Malwa, its impact appears reduced in the Majha region near Amritsar-Gurdaspur-Pathankot districts and is drastically low in the Doaba region near Hoshiarpur-Jalandhar and Ludhiana.

“Pathankot has a huge Hindu population, and Hindu voters are currently preferring Congress to AAP and Akalis, as they see them as essentially Sikh-dominated parties,” says senior journalist Aditya Menon.

The observation seems spot on as most of the Hindu respondents I talk to seem to indeed like Congress more than AAP or SAD.

At the Bhagvan Valmiki bus terminal in Hoshiarpur, I meet a group of youth Dalit respondents who say they have voted for the Bahujan Samaj Party earlier and will vote for the BSP-Akali alliance this time too.

“There is a significant Dalit population in both Jalandhar and Hoshiarpur and BSP still has significant pockets of support among them,” says Menon. “The recently forged SAD-BSP alliance seems to be working well in this region, especially in Hoshiarpur and Jalandhar. And SAD voters are also not deserting the party here as they are doing in Malwa. Because SAD is holding its ground, AAP is not dominating the political discourse here,” he adds.

Also read: Punjab: Despite Strength in Numbers, Why Are Dalits Not Politically Empowered?

So far, the situation looks a bit like a tri-polar contest with AAP being clearly ahead and SAD lagging behind. But will AAP be able to pull through this time?

“It appeared like this in 2017 also, but AAP failed at the last moment,” says Professor Ashutosh Kumar of Punjab University, Chandigarh.

“They still lack strong organisation and maybe because of these insecurities, Kejriwal is not declaring Mann as the chief ministerial candidate. Money and muscle also matter a lot in Punjab elections and Congress is far ahead in those respects. Despite the positive atmosphere, all of this could become the AAP’s Waterloo in the coming election, like 2017,” he concludes.

Rajan Pandey is a freelance journalist. He is associated with the survey agency People’s Pulse.