Why Did AAP Not Live Up to All the Pre-Election Hype in Punjab?

The party's campaign was run by enthusiastic volunteers but in the end was no match for the experienced and familiar Amarinder Singh. 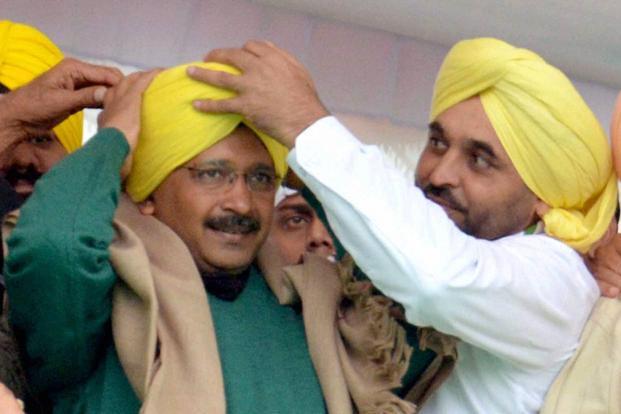 Every Punjabi voter irrespective of the party choice, every journalist who visited Punjab in these last few months, every newspaper’s editorial section and even the opponents of Aam Aadmi Party (AAP) in private unanimously expressed a common thought during the election campaign, that AAP would do well in the state. The estimates ranged between 45 to 75 seats and it was felt that the party would be a major player in government formation or even have a shot on its own.

On their part, AAP leaders, aware of this strong perception, were not modest and could often be heard making tall claims, some even declaring they would touch the 100 seats mark in the 117 member assembly. Along with the public mood, they had other more reliable cues to be as confident as they were. Lakhs of Punjabis turned up in the hundreds of rallies that AAP organized in the six-odd months before the elections. That the party had not relied on many of the usual tricks, of distributing liquor, money and other favours to attract the crowd, it made the leaders, the volunteers and the supporters extremely confident of a landslide victory.

The results did not bear out this optimism. The party won just 20 seats, ahead of the Akali Dal but way behind the Congress which got 77. So did something change suddenly? Why did Congress come out victorious in the Punjab battle? What were the factors that destroyed the so-called AAP-wave?

Looking at the constituency-wise polling data, the most obvious conclusion is that AAP performed the worst in the urban centres and Hindu-dominated pockets. This is extremely intriguing because Arvind Kejriwal was the only Hindu leader of a party in the state. To understand this, we need to go back 18 months or so to the time when the AAP-wave started emerging. Sikh groups at the time were up in arms because of the inability of the Akalis to nab the culprits responsible for numerous sacrilegious incidents involving the Guru Granth Sahib. The disenchantment with the government was at its peak and the only one who paid attention to the grievances was Arvind Kejriwal. He came to the Muktsar Maghi Mela and, in to a huge crowd of Sikhs, promised to punish the culprits. That went down very well and the panthic vote, which normally used to sway elections in the favour of the Akalis started moving towards AAP.

This shift continued when AAP began pandering to the affluent NRI Punjabis of Canada, US and rest of the world. The NRIs (mostly Sikhs) not only donated large amounts of money but also came in droves to campaign for the party.  Thousands of Punjabis had left India and sought asylum in different foreign countries during the dark days of militancy.All seemed to be going well for AAP until the strategists in the Congress decided to turn the tables.

After being unsuccessful in attracting any NRI support for these elections, the Congress decided to take its chance and took an anti-NRI stance. In his speeches, the Captain started blaming AAP for using Khalistani money in its campaign and for cozying up to anti-national secessionist forces. This rhetoric went down very well with the Hindus populace, because they have suffered at the hands of Sikh extremists. To add to the fears, just 40 days before the polls, a right-wing Hindu leader was shot dead in Ludhiana by unidentified gunmen and just 4 days before the polls, a blast ripped through a Congress political rally at Maur near Bathinda. Nobody has till date been arrested for any of these two incidents and it seems nobody will ever be.

An outsider might to think of Punjab as a Sikh state, but this would be afaulty assessment at multiple levels. Hindu voters have always been the deciding factor in Punjab elections, be it when they helped Congress of 2002 topple the Akalis or when they sided with BJP-Akali alliance in 2007 and 2012. Within the Sikhs of Punjab, divisions run deep on the lines of caste, urban-rural divide and even occupations. Affluent urban Sikhs, along with the service-class could not come around supporting a risky and unconventional party being run on the ground by young and passionate volunteers. They just could not believe that AAP had it in it to give a stable government. The same slogans in support of Kejriwal and Bhagwant Mann that drew and attracted thousands of rural voters every single day, fell flat in front of this group of people. This was supposed to be the silent voter that could take AAP across the 59 seat mark but on the voting day it spoke up for the tried and tested leadership of Capt Amarinder. AAP did realize this mistake around a month before the polls and even came up with a special manifesto for government employees, but it was too late.

One of the main reasons why AAP could not come across as a stable option was its inability to project a CM-face. This gave the opposing parties a chance to spread numerous conspiracy theories such as AAP’s intention to import a CM from outside the state. For a state known to always elect a Sikh CM, this uncertainty was too much to digest. AAP on the other hand, feared creating factions within the party and thus kept several leaders like Mann, HS Phoolka, Sukhpal Khaira, Kanwar Sandhu and even youngsters like Harjot Bains and Himmat Shergill in fray for the CM’s post. It did not want to pitch the supporters of these leaders against each other by announcing any one name. These leaders belonged to Punjab and given a chance, anyone of them could have, in time, become popular, but with such uncertainty about who it would be, the voters always perceived them as one rung below the Delhi appointed duo of Sanjay Singh and Durgesh Pathak. Punjabis are known to be loving, kind, affectionate and accepting, but they are also known to be people with pride. When Congress and Akalis told the voters again and again about people from UP deciding AAP’s candidates and thus their future, AAP suddenly started to seem to appear as the ‘outsider’ party to the voters. The same voters who had passionately chosen AAP in 2014 Lok Sabha elections now seemed hesitant. Even the well thought out and researched AAP strategy of attacking Akalis on the rampant drug usage in Punjab was projected by the Akali-BJP alliance as a ploy of some outsiders to malign the Punjabi youth.

In ticket distribution, the failure of AAP leadership to placate Navjot Sidhu should be seen as a major factor contributing especially to its dismal performance in the Majha region. On the other hand, promising the CM post to Sidhu would have resulted in Mann and Phoolka turning rogue and thus hurting AAP even more, but in politics, party leaders are expected to be astute and smart enough to manufacture compromises that suit multiple sides and this Kejriwal failed to do. Some of AAP’s potential candidates also suffered from a paucity of funds and they could not garner sufficient donations to run a decent campaign. Tickets were therefore awarded to the next best choice or to the most affluent one, which along with inviting dissent from the party workers also meant weak candidates.

In the end, the AAP waved fizzled out and the Congress emergent triumphant, despite getting 2 percent less votes in comparison to 2012. AAP managed to dent the Akali vote-bank of 2012 and brought it down by almost 10%. It did extremely well in the reserved seats in Malwa and gained some rural Congress vote-share too but the same Congress was able to snatch BJP votes and managed a terrific performance in cities across the state. The BJP came out as the worst performer in these elections with just 3 seats out of the 23 it contested.

Despite this apparent failure, it is to be noted that a four year old party is now the official opposition in the Punjab assembly while the 95-year old Akali Dal has been decimated to the third position. No doubt AAP has a lot to learn from this election, but it should take solace in the fact that its entire campaign was executed on the ground by inexperienced but passionate and hard-working youngsters who almost out-manouvered the Congress.