As AAP Plans To Expand Further, a Look at the Factors Behind Its Victory in Punjab

Three factors helped the party to successfully present itself as an alternative to the Congress, SAD and the BJP in Punjab. 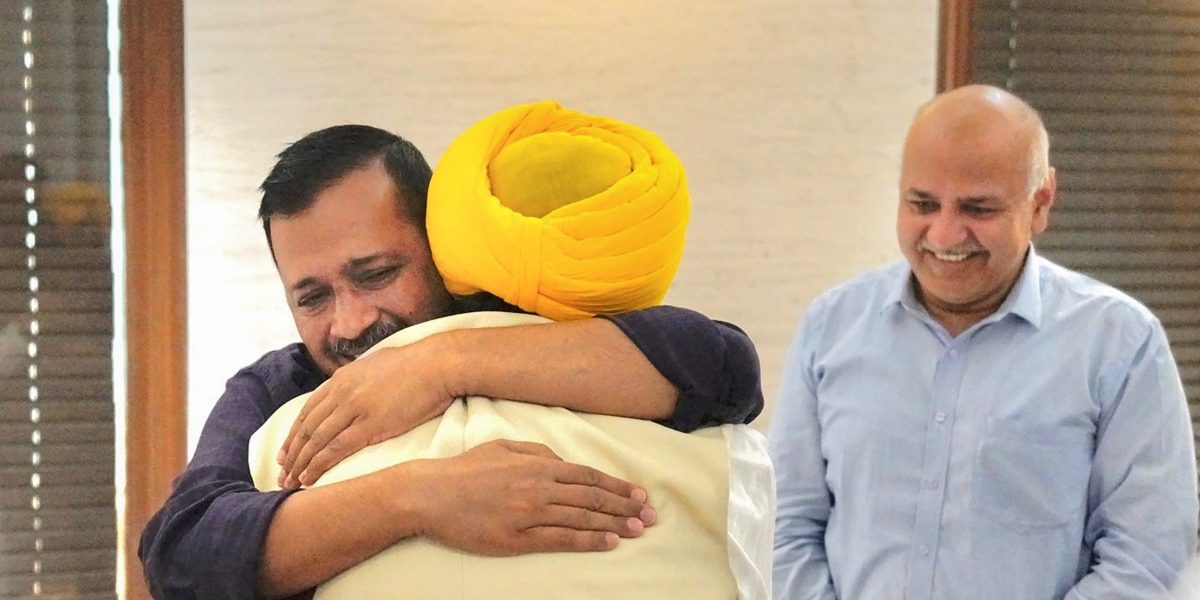 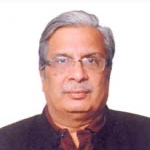 Election results in Punjab have led to the marginalisation of the Congress party and decimation of the regional party, the Shiromani Akali Dal (SAD). Does the Congress’s defeat have further implications for it in the forthcoming elections in Himachal Pradesh and Gujarat?

Meanwhile, the Aam Aadmi Party (AAP) will now try to occupy the space vacated by the Congress and compete with the Bharatiya Janata Party (BJP) to emerge as a national alternative. It is all poised to target states like Himachal Pradesh, Haryana, Rajasthan, Gujarat – all bipolar until now. To understand AAP’s chances in other states, let us first analyse the reasons for its success in Punjab.

The dynamic of Punjab’s elections has undergone a qualitative shift. The boundaries between the political parties got blurred. There was a free movement from one to another. All political parties competed to provide similar packages that wrapped a little differently. There was crowding of electoral space and new electoral alliances were formed. Therefore, the traditional parties (the Congress, SAD, the BJP) attained a similar flavour. AAP looked new and fresh by branding itself as a party for change.

The grammar of electoral discourse was dominated by doles, deras and drugs garnished with identity politics ranging from Dalit identity, radical Sikh assertions (Deep Sidhu’s media clip exhorting the Sikhs to hold sword and not broom), activation of sense of insecurity in Hindu minority and revival of Jat peasantry hegemonic politics. On the other hand, AAP did not locate itself in any faultlines of caste, religion or region. It largely followed a ‘catch all’ approach. The activation of the various faultlines could not act as an impediment to the AAP. 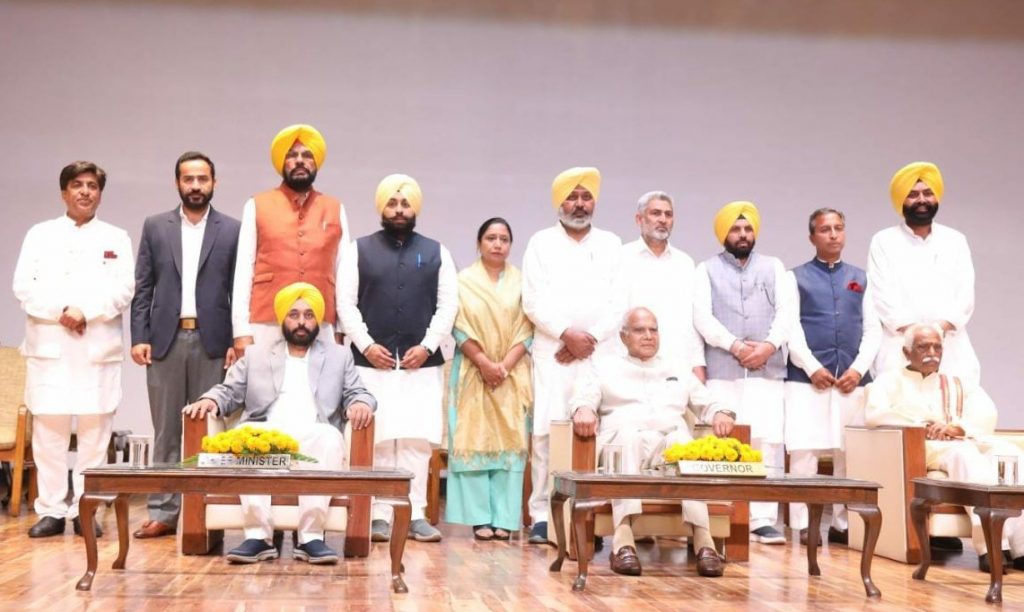 Punjab chief minister Bhagwant Mann and governor Banwarilal Purohit (seated) with the ten MLAs who were sworn in as ministers on March 19, 2022. Photo: Twitter/@BhagwantMann

The second element was introduced to supplement the branding of these traditional political parties as being in favour of structural reforms: liberalisation, privatisation, and globalisation. It proved to be effective in the background of the farmers’ one-year-long protest against corporatisation and privatisation of agriculture. The message that was registered with the people was very ably appropriated by the AAP. The party had an advantage as it did not have any historical baggage and did not locate itself into any faultlines of caste or religion.

Whereas the traditional parties attempted to appropriate these faultlines as exclusive categories, the Congress party drifted from its ideological position of being diversity-sensitive to constructing an exclusive vote bank and artificially tried to evolve a new mix. The party tried to instigate religio-caste politics to cover up its non-performance.

It all started with the manner in which the Congress leadership replaced Amarinder Singh just a few months before the election. Some leaders made public statements that only a Sikh could be the chief minister of Punjab – a remark that did not go well with the urban Hindus of the state, and activated a sense of discrimination in the society, especially amongst the Jat Sikhs and the Hindus. The nomination of a person from the Scheduled Castes as chief minister for the first time created a new wedge in the electoral space.

Watch: What Do the Winds of Change in Punjab Mean for the Rest of India?

In this process, the Congress party violated its connection with the urban Hindus and the Jat Sikhs. Charanjit Singh Channi’s appointment was interpreted as a move to take negate the hegemony of the Sikh Jat peasantry’s control on the politics of the state since the mid-60s. Interestingly, the party’s attempt to mobilise Dalit voters also failed and created a wedge between the Dalits and the other social groups. All these factors led to the marginalisation of the Congress in the elections.

As far as the SAD is concerned, it also changed trajectory. After breaking away from its traditional ally, the BJP, due to the farmers’ protest and disagreement on three farm laws, the SAD instead entered into an alliance with the Bahujan Samaj Party (BSP).

In 2012, the SAD-BJP was re-elected because of their ‘good governance’ image. But between 2012 and 2017, the SAD’s panthic stance suffered a major setback due to unresolved sacrilege cases, unfulfilled promises and alleged involvement with the drug and sand mafia. In the lead up to the elections, the party’s pro-farmer image was also compromised with the enactment of the three Acts by the BJP-led government at the Centre.

And, the BJP, without a strong political base, aligned with Amarinder Singh’s Punjab Lok Congress (PLC) and Shiromani Akali Dal (Sanyukt). Given the BJP’s baggage of non-performance in Punjab combined and the opposition to the farm laws, it had little hope of performing well in the assembly elections. It could secure only 6% of the votes and acted as a spoiler for the Congress.

This worked to the advantage of the AAP as in Punjab, few people vote based on religion or caste – unlike many other Indian states. For instance, the Scheduled Castes constitute more than 32% of the total population in Punjab and yet do not affirm to be a homogenous group. Almost 60% of the SCs are followers of the Sikh religion and the remaining 40% are Hindus. As a consequence, they have not developed as a caste vote bank and there is no caste-based party to speak for their rights. Amongst themselves, the Scheduled Castes are fragmented into Mazhabis, Chamars, Ad-dharmis, Balmikis and other groups. Like other identities, caste in Punjab has its own regional flavour.

Similarly, there are no neat categories of minority (Hindu) and majority (Sikh).

Third, the major emphasis was on the brand name. The leaders, like Kejriwal and Bhagwant Mann, were branded as charismatic, honest, no-nonsense, and sole repository of pro-people and nationalist fervour. In Punjab, there was no Modi to outcompete Kejriwal. Thus, it was a cakewalk.

On the other hand, the Congress took it upon itself to tarnish the image of its own leaders. Amarinder Singh was unceremoniously removed and labelled as a non-performing CM. In this power struggle, another Congress leader, Navjot Singh Sidhu constructed a narrative that the traditional leadership in the state was anti-Punjab and had “looted” Punjab, accusing Amarinder and the Badals of being in cahoots. This project was further expanded by Channi just months before the elections, when SAD leader Bikram Singh Majithia was arrested in a drug trafficking case. 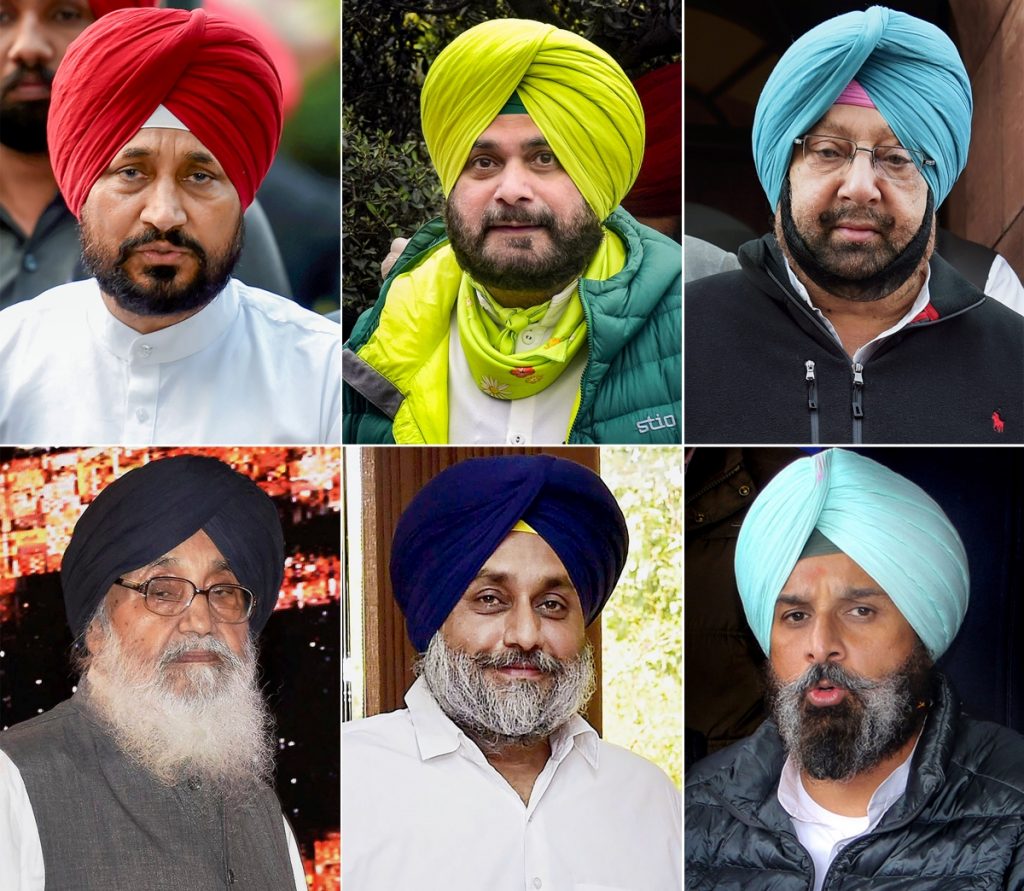 The Badals attacked Sidhu as an unstable party hopper and an opportunist. The BJP, in turn, tried to brand Channi as the kingpin of the sand mafia. The traditional parties worked overtime in the last three months to provide sufficient fodder in the public domain to paint each other as a gang of looters. This was music to Kejriwal’s ears. In fact, the game changed radically in the last three months.

AAP branded itself as a paternalistic, caretaker party through promises like free education, free medical treatment, free electricity up to 300 units and Rs 1,000 monthly stipend to women above 18 years. It also reformulated the discourse on jobs with a call to the youth to become job providers and not job seekers.

The party’s manifesto also promised schemes that catered to farmers, traders, students, Dalits, women, industrialists and other groups, instead of a traditional manifesto, which, by definition, is a declaration of principles, policies, intentions and ideological commitment.

The AAP reached out to the footloose voters looking to move away from the status-quoist traditional parties, ideologically unbound pragmatic floating votes, and young voters. This unnerved the traditional political parties and their leaders, who were struggling to overcome the massive trust deficit.

This is a new way of politics. The AAP labelled the traditional parties as anti-Punjab, corrupt, and non-performing. It presented itself as trustworthy without any historical baggage as an advantage and showcased its ‘Delhi model’ of governance; portrayed itself as a party of ‘change’, bereft of any identity politics, and distanced itself from the issues, such as, secular nationalism, national security, and agrarian crisis.

Pramod Kumar is director of the Institute for Development and Communication (IDC), Chandigarh.