AAP MLA and computer engineer Saurabh Bhardwaj carried out the demonstration, insisting that the BJP has been gaining due to EVM rigging, EC dismisses show. 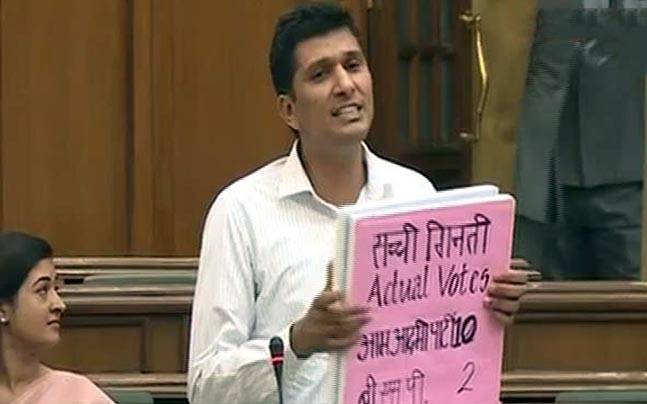 New Delhi: The Aam Aadmi Party (AAP) on Tuesday used a special sitting of the Delhi assembly to “expose” how electronic voting machines (EVMs) can be tampered with through a live demonstration, which was carried out by MLA and software engineer Saurabh Bhardwaj.

The machine it used, however, is not one used by the Election Commission of India – a fact the ECI raised to dismiss the possibility that its own machines had been, or could be, manipulated or tampered with.

Bhardwaj, who is an engineering graduate in computer science and worked for Johnson Controls India Pvt Ltd, Gurgaon and Invensys, now Schneider Electric, Hyderabad before he joined AAP, demonstrated on an EVM how a person who poses as a voter and uses secret codes can manipulate the machine’s results.

AAP, which kept tweeting Bhardwaj’s statements in the Delhi assembly, said the demonstration had established that EVMs can be tampered with. A mock poll was also conducted on an EVM by Bhardwaj, which apparently showed how results can be changed.

– For the first time in India
– LIVE Demo of EVM tampering
– See for yourself
– Share with everyone#WeChallengeEC pic.twitter.com/PxOYoqvV0D

AAP said leaders of other political parties were also invited to the assembly to witness the live demonstration of EVM tampering.

Bhardwaj, who has ten years of experience working with embedded systems, was chosen to demonstrate how EVM tampering is possible as the Election Commission (EC) has always maintained that these machines cannot be tampered with during an actual election process due to the many safeguards in place.

The engineer-turned-politician said he felt it was important to show that EVMs can be manipulated. “I will demonstrate that the faith of democracy in India rests on machines that a simple man like me can manipulate,” he said.

Stating that an EVM consists of a control unit that rests with the presiding officer and ballot unit, which are tested before polls, Bhardwaj insisted that while voting machines are checked the day of the polls, even a “tampered machine” can be shown to be working fine.

“As voters cast their votes, they believe their vote goes to the right party,” he said, adding that in reality, the vote can go to a different party if the EVM is tampered with.

Through a live mock test, he then demonstrated how a large number of votes polled for AAP actually went to the BJP on the EVM used by him.

During the demonstration, Bharadwaj said the EVM can be tampered in such a way that it also shows the correct results for a few votes. He also reset the EVM to demonstrate how the same machines which pass the mock test on a polling day can be manipulated during the voting process.

Though the light flashes against the button which is pressed by the voter, the vote may not necessarily go to that party, said Bhardwaj. He said this can happen when someone enters the premises posing as a voter and then uses a secret code, which is used to manipulate the election.

He said once the polls close, EVMS are sealed, numbers are noted and EVMs are taken under security to the strongrooms where they are kept till the counting day. “But the tampering is already done,” he said.

Stating that consequently the vote tally turns out to be absolutely different from the actual votes cast, he said, this is “a sad end for democracy and the very foundation it stands on”.

Bhardwaj said he has seen it happen all over the country that votes cast for different parties end up going to the BJP alone. Even the use of the voter verifiable paper audit trail, which has been made mandatory for all future elections by the EC, has not been able to help in this, he claimed.

The AAP leader said the EC’s inquiry report into allegations of EVM tampering in the assembly elections held this year had not explained anything. He added that this was also the case with regard to the arguments put out by the commission following allegations of EVMs showing votes cast for other parties during demonstrations going to BJP candidates in Bhind and Dhaulpur.

“I have spent ten years working in this field and I challenge any scientist to explain this to me. We welcome both Harvard and hard work,” he said, taking a dig at the prime minister.

Late on Tuesday night, the Election Commission responded to the exercise in Delhi Assembly, terming it a “so called demonstration of tampering” through a “look-alike” EVM.

It stated that “it should be understood that it is possible for anyone to make any electronic gadget which ‘looks-like’ the ECI EVM and demonstrate any magic or tampering.”

The commission further stated that “it is common sense that gadgets other than ECI EVMs can be programmed to perform in a pre-determined way, but it simply cannot be implied that ECI EVMs will behave in the same manner because the ECI EVMs are technically secured and function under an elaborate administrative and security protocol.”

Therefore, the commission said: “Such so called demonstration on extraneous and duplicate gadgets which are not owned by the ECI cannot be exploited to influence our intelligent citizens and electorate to assail or vilify the EVMs used by the commission in its electoral process.”

The commission said it has also scheduled a meeting of all political parties on May 12 on EVM issues and other electoral reforms.