A Congressman Outlines the Way Forward for the Congress Party

Reviving the Congress is imperative to prevent the Sangh parivaar's plans to turn India into an illiberal theocracy. 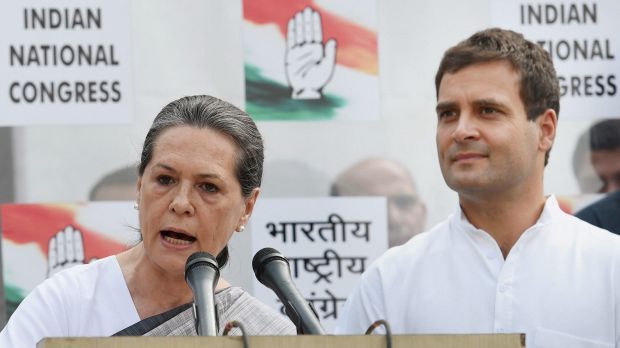 Now that the post-election dust has settled, it is time to look to the future. I will not focus on analysing the election results and the underlying numbers. The broad perception is that the Congress has weakened, BJP has gained ground and regional leaders remain strong. Even so, Congress Mukt Bharat is extremely unlikely. While some in the Congress may find that comforting, I warn against any complacency. It is important for us in the Congress to take very seriously the nature of our adversary, the Sangh Parivar. I say so because I am a concerned citizen who thinks the Congress Party’s future is one of national importance. It is a question about India’s future as a secular, pluralistic, liberal democracy.

With this background, here are some reflections on the Congress Party, our battle with the RSS and BJP, and what I believe is needed to stage a comeback.

From leading the fight for independence to modern day India, the Congress is an integral part of the country’s evolution. The Congress Party sowed the seeds of secularism, promoted the country’s pluralistic vision and helped people appreciate the importance of liberal values.

It is also true that Congress has not always been an unequivocal champion of these values, making mistakes along the way. But, I have yet to come across any democracy or political party that has not had its share of mistakes. Beyond shaping the country’s core values, the Congress has also played a big part in India’s development story, especially after the 1991 reforms. While it is easy to criticise the achievements of the Congress Party, I am certain the prime minister is learning how far India has come while he was taking lessons in RSS shakhas.

But, the Congress Party has suffered setbacks and the Sangh Parivar is taking advantage. There is a well thought out attack on India’s cherished values. Those who had little to do with India’s freedom movement are now using the divide and rule policies of our erstwhile oppressors. In state after state, in election after election, the Sangh Parivar leaves a trail of divisiveness and polarisation. The rhetoric of economic development and nationalism is liberally applied. It is a powerful combination. To keep the Hindutva pot boiling, there are insinuations of minority aggression (love jihad), religious fervour (ghar wapsi and beef ban), fear mongering (Muslims will become a majority or they are prone to terrorism) and cultural aggression (we are all Hindus). Nationalism is hyper, vigilantism is law enforcement, and terrorists are good or bad depending on their religion. It is now fashionable to give a “clean chit” to those convicted or accused of heinous crimes. Evidence is manipulated, witnesses suddenly turn hostile, and even the judiciary is intimidated. We shake our heads disapprovingly but there’s little else. Many media outlets simply parrot the official line.

India is a large and diverse country. The diversity is beautiful but it also poses challenges. It is harder for national parties to emerge. While Congress emerged during the independence movement, the BJP took decades to get where it is. But, even for them, it wasn’t easy. Hindutva alone could not get them where they are. Disaffection among the people as well as mistakes of the Congress Party allowed the BJP to win decisively in 2014. Mind you, in 1998, the BJP was constrained by coalition politics because it was still not a fully national party. But, the RSS has built up the current BJP with great patience. While the rest of us were taking liberal democracy for granted, they were working hard on the ground, waiting for an opportunity to strike. In short, the Congress Party’s presence as a national alternative and a check on the Sangh Parivar is absolutely essential if we want India to continue to evolve as a secular, pluralistic and liberal democracy.

An agenda for the Congress Party

It is also clear that the RSS and the BJP will try to keep the Congress on the defensive. They have enough smart people to know that Congress is not going to disappear any time soon. But, they will try to further reduce its footprint or at least keep it at manageable levels. They will do so using many techniques such as creating misgivings about the Gandhi family, leveling corruption charges, polarising the electorate, generating hysteria around hyper-nationalism etc. But, that is what the RSS and BJP will do. Here’s what I think the Congress must do.

If there is any thinking within our party that people will turn to us in the event that Modi Sarkar fails to deliver, we should forget about it. There is greater competition for people’s affection. Regional parties are entrenched and the Congress cannot take for granted that in a national election, people will automatically turn to us if Narendra Modi disappoints. If people support other players, this will lead to a scattered opposition at the national level, which is not in India’s national interest.

The Congress must fight to remain the central opposition party around which the broader opposition can coalesce. To do so, we must first establish in clear terms what the party stands for. If the Sangh Parivar stands for Hindutva, the Congress Party must take an aggressive and unequivocal stand for secularism, pluralism and progressive, liberal values. Hindutva is about division and exclusion. Congress must be about unity and inclusion. The Sangh Parivar’s social engineering makes pawns out of the poor. The Congress Party must aggressively highlight this injustice. If the Sangh Parivar can do the wrong thing with full force, we must turn the tables and do the right thing with greater force.

The Congress must also sharpen its core economic message. The government’s policies have damaged the economy and put millions of lives at risk. At a time of failing monsoons and drought, the hyped up focus on Make in India has led to neglect of the rural economy. A high indirect tax structure, partly exacerbated by hikes in excise duties on fuels, is damaging the middle class at a time when demand is low. The private sector is hurting and job creation has evaporated. The Congress must bring a laser sharp focus on jobs, rural transformation, urbanisation and climate change. Ambitious investments in social infrastructure such as health and education along with much stronger safety nets for the poor are required. Let us be clear: BJP’s “Transforming India” slogan is simply India Shining 2. The Congress Party has a strong case to make before the public. To make the government accountable, we must hold its feet to the fire and do so relentlessly.

For Congress to regain its health, and to mount a counter-offensive, we must look to the states. Local leadership must be empowered and decision-making decentralised. Without any delay, we must scale up preparation and mobilisation for the next round of elections. There are challenges, however. It is no secret that the Congress has organisational weaknesses in different states. But, we have to try every possible method to counter the organising prowess of the RSS. For states that are going for elections, we must increase support by enlisting workers from other states. We should do this on a big enough scale and well in advance of the elections. There is no time to lose. This is a fight for the soul of India!

The Congress must also be more pragmatic. No matter how much we may want the Congress to do things all by itself, the reality is we need partners at this time. We have to cultivate like-minded parties and personalities to help us beat back the threat the Sangh Parivar poses to the country. We must also reach out to those who may be estranged from the Congress but are worried for the country’s future. This is war. In this bare-knuckles fight, a velvet glove will not do. Let’s not hold our punches. Let’s fight for every inch and let’s bring our friends along.

For any large organisation, leadership succession is of vital importance, and a political party is not immune to this general principle. I believe it is time for a managed transition to new leadership—Mrs Sonia Gandhi must continue to inspire and guide the party. But, it is also now time for Rahul Gandhi to be elevated as party president. Our next generation of leaders should be inducted into the Congress Working Committee. A panel of the Party’s senior leadership under Sonia Gandhi should oversee the transition. I do not subscribe to the view that we should push youth forward and relegate seniors to a symbolic margdarshak mandal. Our senior leadership has much to offer and younger leaders have a lot to learn from them. Also, to ensure that the Congress is well placed to serve the country in the 21st century, we should institute a detailed review of the party’s constitution, organisational structure and work culture. Congress helped the country change. The country now needs Congress to change.

The revival of the Congress is not an internal party affair. It is about India. It is about our values and our ability to safeguard the country’s future. We can’t let extremism take India down. We can’t allow Pakistan to be our model. I believe it is the Congress Party alone that can help India avoid a catastrophic tryst with an illiberal theocracy. The Congress can be the big tent that will once again inspire a movement, this time to protect the freedoms that it helped the country win in 1947.

The author, formerly with the World Bank, is a National Media Panellist of the Indian National Congress. Views expressed are personal.